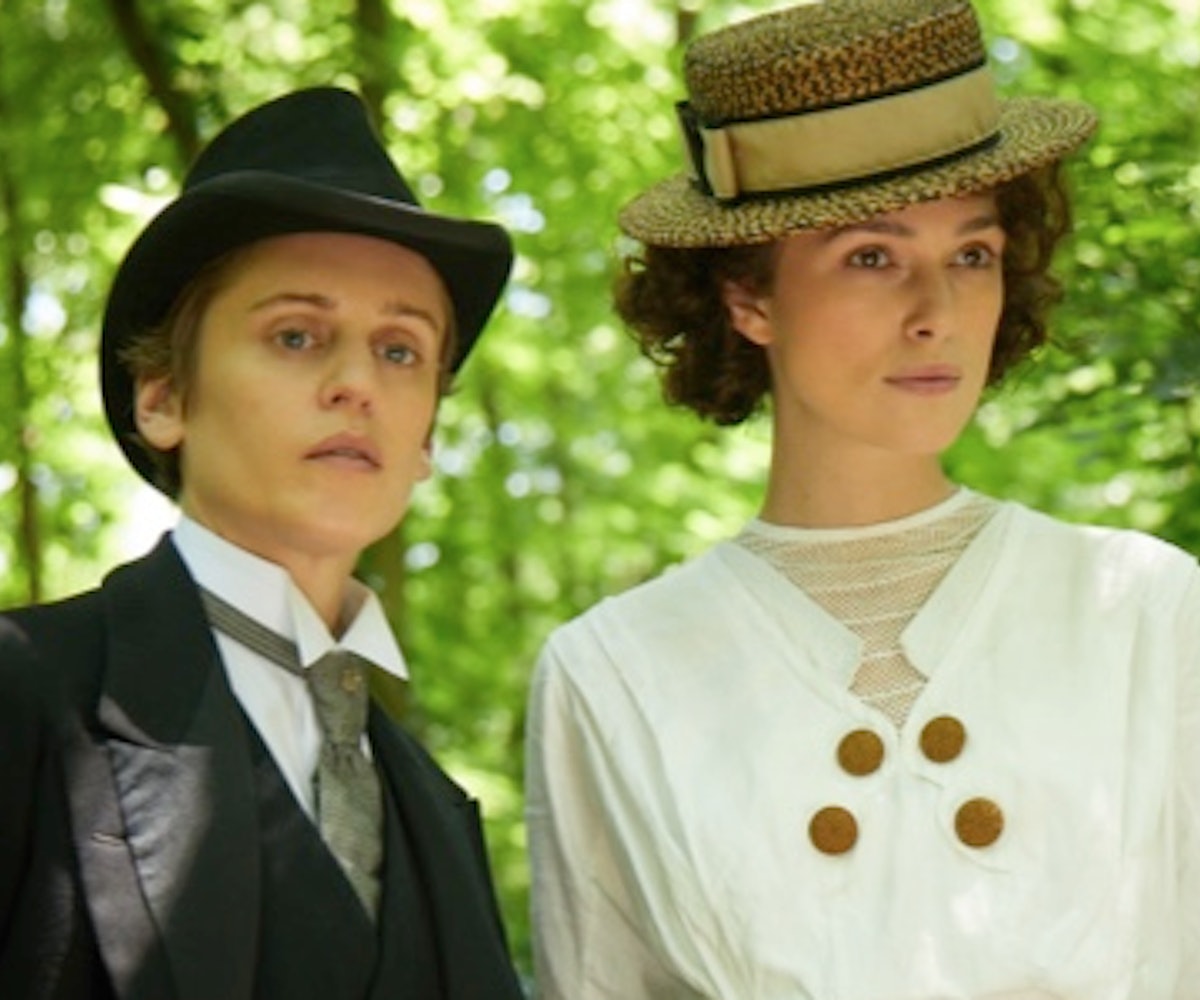 Denise Gough is nervous. It’s her first time doing the Toronto International Film Festival, and she’s just getting started with a string of interviews her agents booked to promote her forthcoming film, Colette. But perhaps that's because her role in the forthcoming film is a contentious one.

In the film, Keira Knightley stars as the titular Colette, who ghostwrites a celebrated novel for her husband Willy and eventually begins to fight for ownership of her hard-won work, all whilst scandalizing Parisian society with her irreverence toward traditional gender conventions. As for Gough, she plays Missy—aka Uncle Max, Colette’s trans masculine lover.

To Gough, the film’s strong feminist bent and promise of inclusivity was an appealing sell, and the ability to tell an underrepresented story was just the cherry on top. However, in the wake of the backlash surrounding Scarlett Johansson’s casting as Dante Gill, a trans man, in Rupert Sanders’ Rub & Tug, the role has raised a few eyebrows. Ahead of the film’s premiere, we took a minute to ask Gough about her thoughts, the potential controversy her role could cause, and why she wants not only to stand behind it but start a conversation. Even if it destroys her. Read our Q&A, below.

What drew you to Colette, and the role of Missy in particular? Why it was important to you to help tell their story?

I couldn't believe that I didn't know about it. Coming from Western Ireland, our history books just don't have these people in them, so it really brought home how important it is that the education system starts telling stories of incredible women. So that young girls have more of an idea of people who walked before them

We read so much about the men who were changing the world, but these girls were really doing it. I wanted to work with [director Wash Westmoreland], as well, and [Missy] seemed like a theatrical character, too. So it's good coming from my background of theater and everything... It was something I could really get into, you know?

I didn't, in a million years, think they'd cast me, because nobody knows who I am, in the film. I was really impressed that they went with somebody who has no profile to be with Keira. So, it was a mixture of things, but mostly, a lot of jobs, I do them so I can be educated. Because every time I take a job, then I research and learn more and more about brilliant people.

What was something that surprised you in your research?

First of all, I can't believe it was ever illegal for [women] to wear fucking trousers, because we take all of that stuff for granted now. And also, about 100 years ago, we didn't have the kind of labels that we have now. So there was no word for lesbian or for trans or for bi-curious. There was none of that. So these people were all non-conforming before non-conforming was an articulated thing, you know? So it's a different sort of energy to it. And also, because they're French, it was a very different culture, and I was just profoundly moved by their courage. When you read about [situations like this], you think, Fucking hell, these people were doing it at a time when they had a lot to lose.

There was that and, also, when you watch the film, you can see an example of toxic masculinity in Willy and where that comes from, too. I think Dominic [West] plays him so well, because you understand that's just the way that it was back then. Women were to be owned, and their talent was to be owned.

But then, what Missy did, was show another image of masculinity. A much more progressive, empowering [image, and I think that was] informed entirely by the fact that she was a woman. She had the experience of what it was like to live as a woman. She was married to a man. She was in her woman's body. But when she started to present as a man, her man was so much more of a man than the example we had of Willy. A man that I think we could all do with having more of.

Were you hesitant about taking this role? Especially given the conversation surrounding trans erasure that happened when Scarlett Johansson was cast in Rub & Tug?

Not at the time when I took it, but I can understand [where that anger comes from]. As a woman who has felt misrepresented, underrepresented, all of that, in film, I can empathize completely if people feel that my casting goes against something. But what we have to understand, too, is 100 years ago there was no trans, there was no lesbian. We didn't have these names—these things that we have access to now. Also, we worked a lot with trans experts and turn-of-the-century [scholars]... and Missy wasn't trans. Missy was known as an “invert” at that time. She was somebody that presented as a man. She was known as both "she" and "he." Colette, in all of her letters, called her "Missy" and used "she," apart from, at certain points which we highlighted in the film, where she calls him "Uncle Max" and "him," and so these are both pronouns which were really important at that time.

Going back through history and assigning contemporary gender identities onto historical characters is more complicated than it is now. Also, in the film, what Wash has done so brilliantly, I think, is casting two trans actors in cis roles. We also have a lesbian playing a straight woman. We have a straight woman playing a bi-curious woman. We have an Asian man playing a man who was historically white. We have a black man who was historically white. What Wash has done is shown is that, when you're trans, you shouldn't have to just play trans roles.

And Wash wanted me for the role, and the casting process was completely open. He saw everyone for the role. But then he saw me in a play, and he believed that what I had to offer captured an essence of what he wanted for his Missy in this film. And so, as somebody who just wants to play great characters, I felt within my rights to do it. I really do. I can understand that people may feel that that's not right, but... If I'm only allowed to play what I am, then I'm only allowed to play Irish women, and I would hope that's not where we're going. But, also, it's like Laverne Cox says, "It's important that trans actors play trans roles, otherwise it's like a dude in a dress,” and I totally hear that. But Missy is more complicated, I think. In terms of when it was set and who we're talking about.

Also when you read about Missy, because the French language is masculine/feminine and linguistically the [both] pronouns are used, all the time. So it's appropriate for me to talk about Missy as being from the time that she was from. But, it's been an education for me, and I don't want to, in any way, take away from people who feel that if my being cast in this role is going to further a conversation about the casting of trans actors in roles. I'm happy to be part of that conversation, even if that means that I'm destroyed. That's completely fucking fine with me.

Sometimes that's what has to happen. But I would hope, if you look at my work throughout my career—publicly, privately, and in my work on and off stage—I have only ever been an advocate for anyone who feels marginalized. And when you come from the theater, it's kind of natural for me... I don't take any of this stuff lightly. And so, if I'm part of a bigger conversation, then that's fantastic as well.

No, but I'm glad we talked about that because it has been a thing for me. When that happened with Scarlett, I thought, Ah, okay. I had to really look at trying to take responsibility and see if I had done something that was maybe wrong. But I think I can rest easy with my decision to do this and to offer up my playing of the role to continue a conversation.