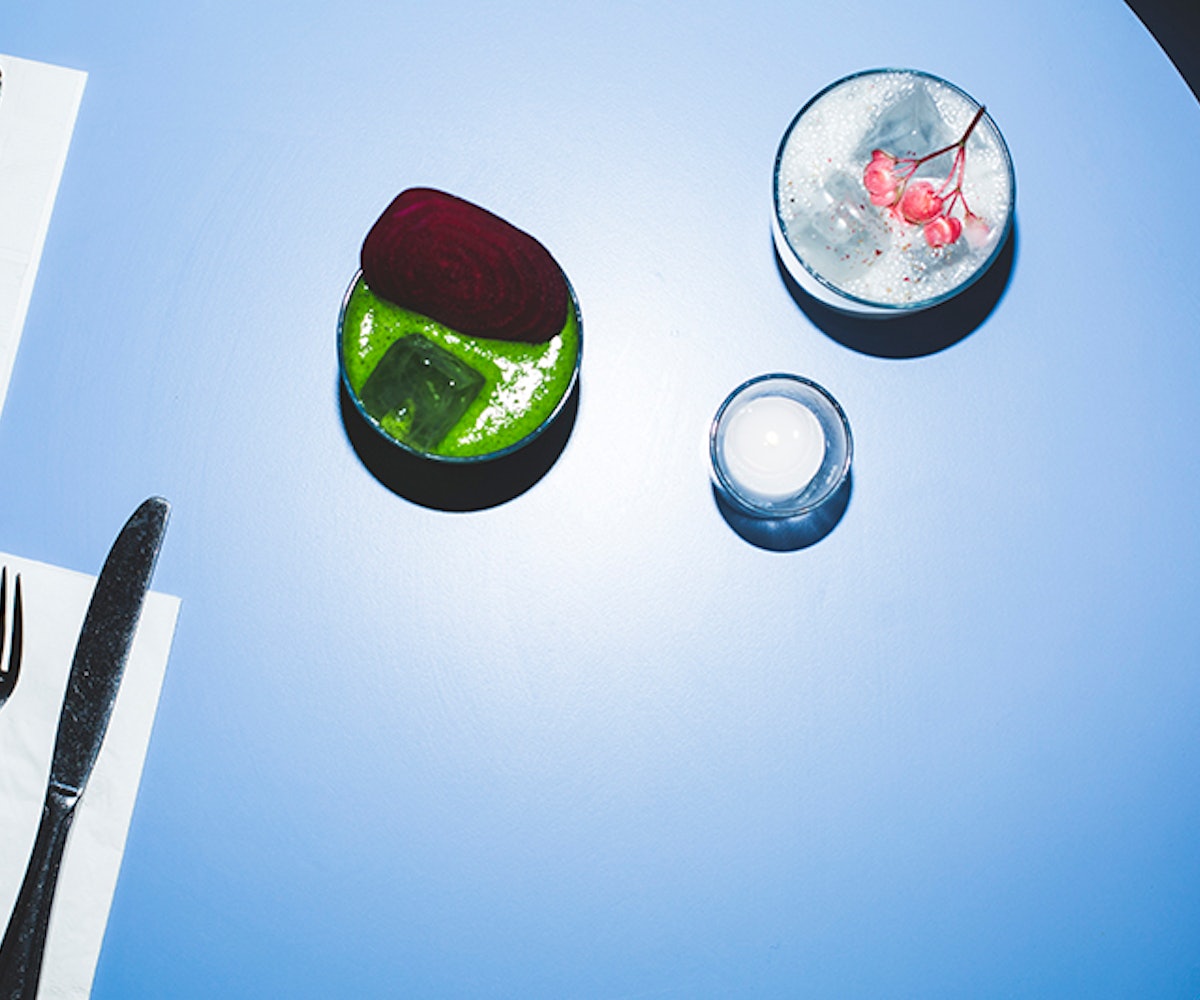 The saying that we eat first with our eyes has taken on new relevance in the last few years as social media, particularly Instagram, has encouraged users to consider food's aesthetic markers as much as its gustatory ones. Not only have chefs conceived dishes—everything from rainbow bagels to unicorn lattes—in order to attract online attention, but some restaurants even design their interiors with Instagram feeds in mind. The rise of food as an aesthetic trend is impossible to ignore, and is more than a little bit disturbing when considered as such; it is, after all, making mealtime an increasingly performative activity, and decontextualizing it from its primary function—to keep us alive. Then, too, comes the question: If food has become nothing more than a trend, what happens when that trend dies?

Alissa Wagner and Sabrina De Sousa opened their restaurant Dimes on a bustling street in New York's Chinatown in early 2013, just at the very beginning of the rise of what is most easily thought of as Food-stagram. The restaurant quickly became a favorite of the city's downtown elite, and while part of the reason for that is undoubtedly the unabashed deliciousness of Dimes' menu (I dream about the Big Salad), another aspect of its popularity could fairly be ascribed to the aesthetic Wagner and De Sousa cultivated, one which is just as intelligent and captivating as their food.

Inspired by the Memphis Group, Dimes' interior and branding are replete with dramatic graphic shapes and bright primary colors; it's playful but never cute. As with the food, also always plated with care and often featuring riotously colorful ingredients, the look is one which lends itself well to Instagram feeds, and to the kind of customers who like to visit a spot in order to post a photo of their experience.

While all this might seem to add up to a business that has little staying power, quite the opposite is true of Dimes. Rather than lose its sparkle after the first wave of popularity, Dimes has only grown increasingly relevant, as both a destination dining spot and as a neighborhood mini-empire that serves as a commercial archipelago of sorts, where regulars can stop by one of its several locations (beside the original restaurant, there is a deli and grocery) to buy everything from fresh produce and apothecary items (the Salt Scrub is a favorite) to the De Sousa-designed brightly colored wooden pepper mill, a design lover's dream table topper.

Recently, I spoke with Wagner and Dimes' third partner, Sophie Helsby, who joined Wagner and De Sousa in 2015, about how they've managed to thrive in such a trend-focused environment, and Wagner told me, "Our focus, since the beginning, has been regulars, which is really nice, because you know everyone by name. It helps you grow your business, too, because they really talk to you, and they tell you what their needs are." This translates into, for example, a market stocked with the kind of things New Yorkers want to be able to just pop into a corner store to buy, rather than order online or go into a huge chain store; think, things like cult beauty products like Mountain Ocean's Skin Trip, the coconut-scented body lotion with the best texture ever, or house-made granola and hot sauce. These kinds of things might be incredibly popular among trendsetters right now, but they've been mainstays at Dimes long before they peaked, and will remain so long after the Insta-stars of today move on.

Wagner says, "[When] Sabrina and I started the company four years ago, we kind of put blinders on when it came to what was going on in the world and what other people were doing, and listened to our peer group and the temperature of the neighborhood and the community. We were responding to people’s needs, creating things that we thought were missing, creating things that we were really passionate about and that we believed in."

Instead of bending toward the will of the masses, the Dimes team stayed focus on what was interesting to them. Wagner continues, "I think our approach has always been a more organic journey. We [had] all lived in this neighborhood for 10 years; we just were like, ‘Oh we need this, we need this.’ We created it from there. We don't really latch onto the trends. We try to keep it classic but also interesting. And I feel like there’s ways that you can play with new dishes or new exciting elements without having to do a clean sweep of your whole brand identity."

Helsby expands on the importance of staying true to your audience, saying that being "so regular-driven really lends itself to having [constructive] feedback," and noting that "we’re always open to suggestions. At the very beginning, when we first opened [the market], we had a suggestions notebook!"

The balance that Dimes strikes so well, then, is one in which collaboration with the kind of true-blue customers that see a business through the rollercoaster ride of social media trends is something that complements the clear vision of its founders; it allows a business to become integrated into its neighborhood, making proprietors and customers feel like friends, and even family. It also allows a business to feel confident about taking risks and doing things it's maybe not "supposed" to do.

Helsby says, "One thing I think is a very special aspect to this place is that there’s no formula. It just keeps it really interesting. There’s no 'it’s got to be like this.' It's like, maybe we want to open a market, let’s try it. Or, Sabrina, she co-designed a chair, and she just designed a pepper mill. We work on these different projects; it’s just kind of like, 'Let’s have an idea and make it happen,' rather than, ‘Oh, that’s not what a restaurant does.’ So that’s been very fun because you never know what we might do."

But we're certainly excited to find out.

NEXT UP
Culture
In Cann’s Holiday Campaign, The Greatest Gift Is Being Chill
Culture
Not One, But Two BTS Documentaries Are Coming
Culture
NYLON Party Report Card: Partying With The Stars & 94 Foot Long Whale At The Natural History Museum Gala
Culture
10 Luxurious Gifts For Your Bougiest Friend