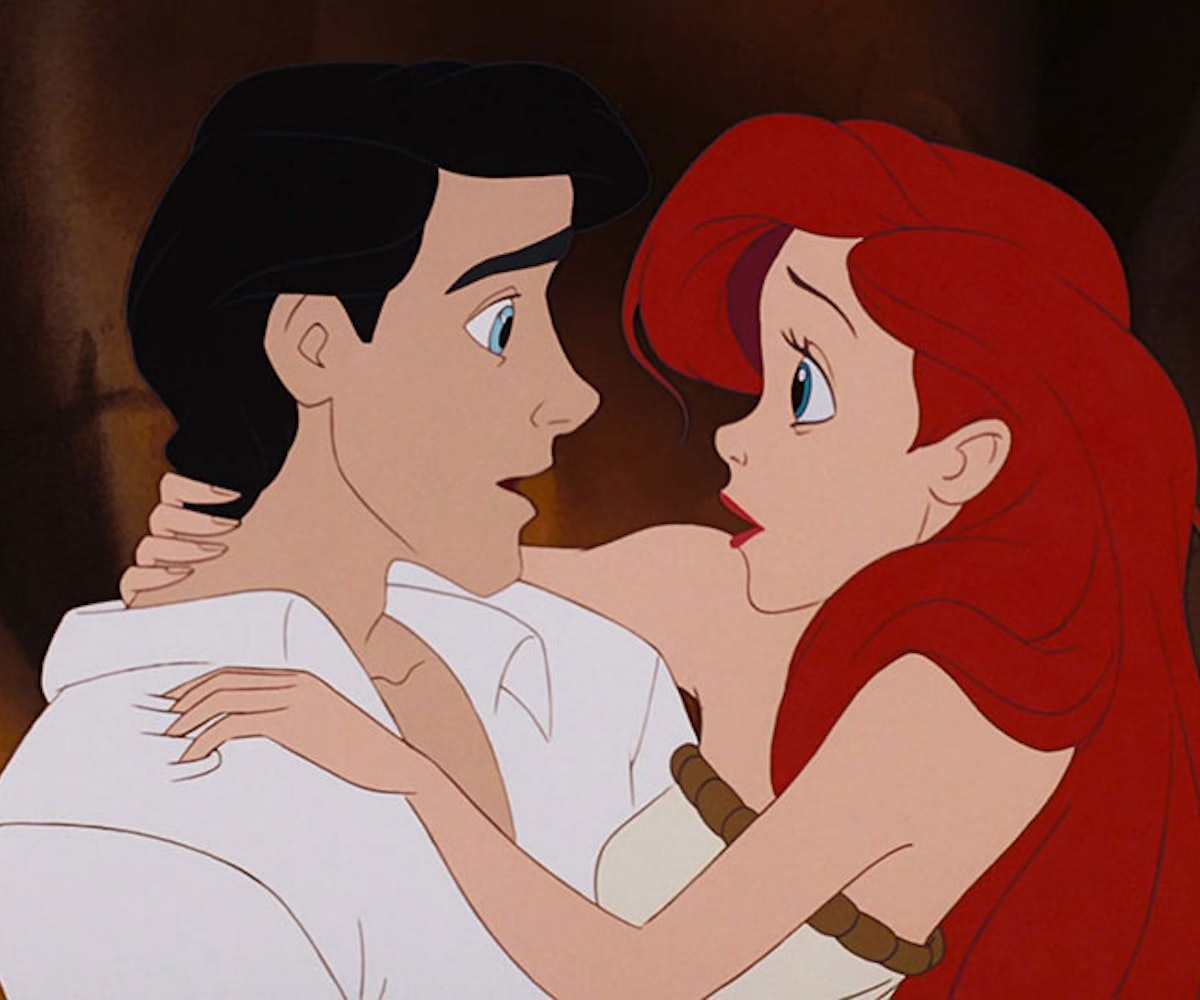 Everyone likes to say that Disney gives young girls unrealistic ideas about love: Mainly, that there’s a Prince Charming out there for everyone.

But if you think about it, that’s totally true. Prince Charming is a flaky foot fetishist who kisses comatose women. If anything, the Mouse House over-prepares our girl-children for the worst nightmares the dating world has to offer. Disney’s suite of classic animated films does have a few functional relationships, but far more dysfunctional ones.

Here’s a totally objective ranking of the studio’s romantic pairings, from least to most functional. (Of course, the Disney couple missing from this list is also the only one destined to last forever: Walt Disney’s Frozen Body and Walt Disney’s Anti-Semitism. Now that’s a match made in heaven.)

This partnership sucks badly enough that even the general viewership has picked up on its blatantly misogynistic undertones. Any Disney fan can see how messed up it is that Ariel pawned her voice for a couple of legs, but if you delve a little deeper, there’s so much else going on. For starters, Ariel is a princess too, just like Prince Eric, and yet for some reason, she’s referred to as only Ariel, whereas Eric always gets his princely title. That’s evidence of how low her status is in this arrangement.

Plus, Ariel is only 16, and Eric is 18. That’s not uncommon, but technically he’s an adult, which is slightly shady of him. Also, he cheats on her with Vanessa, just because he has this idea in his head that the perfect girl is still out there somewhere. So many people let their idealism get in the way of their happiness. Then later on, when she turns back into Ursula, he stabs her with a boat. A guy who kills his ex-fiancé is not going to make a good partner.

General rule: If you’re selling something to a hoarse woman who lives underground with two spineless male assistants just to impress a guy with how quiet you can be, it’s probably time to call things off.

An ill-tempered monster kidnaps a girl’s father and then also kidnaps her but it’s chill because he gives her books—and all his stuff can talk and put on rousing musical numbers to make her feel welcome. Tale as old as time! Both of these star-crossed lovers are French, so you know it’s not leading to marriage anytime soon.

There’s a very King of Queens vibe happening here, since she’s a hot French teenager and he’s some sort of large unfuckable mammal. He appreciates her book love and supports it, but this doesn’t really undo the fact that he’s a kidnapper who turned away a beggar, and only apologized when he found out she was hot and powerful. The Enchantress was just trying to keep a hot jerk away from nice college-bound girls like Belle. Where’s the Enchantress’s movie? I want to see that movie.

Look: We’ve all dated a racist. Maybe you got three weeks into a relationship with a guy before he said something about “building a wall around America.” But it’s a whole new level of self-disrespect to date a propagator of genocide, especially if it’s on your specific group of people. John Smith was even voiced by noted race scholar Mel Gibson. Pocahontas is another strong-willed independent Disney princess who loves gallivanting through nature and being emotionally supported by animals, but she loses points for almost dying at her father’s hands all for a male blonde in middle management who probably has syphilis.

This three-dimensional heroine quickly turns into a manic pixie dream-toon as soon as Hairstyle shows up. How lame is that? Your romantic partner should bring out the best in you, not make you the most desperate version of yourself. Fortunately, Smith gets shot by his boss and has to sail back to England (but like, he probably dies on the boat?). Pocahontas will most likely look back on this relationship as a very educational mistake.

The 1937 film version of Snow White and the Seven Dwarves is our first introduction to Prince Charming: pop culture’s most beloved serial cheater. Snow had him when he was at his most busted (check him out, he’s a weak-jawed shlubby mess), and yet once he gets a little hotter, he moved on to not one, but two other princesses. She deserves a lot better, even if she is a codependent, no-female-friend-having, “I bet the Queen’s just jealous of how hot I am” amateur singer who lives with a bunch of Teamsters in the middle of nowhere.

Oh look, he’s back, and he’s still kissing sleeping chicks. What’s up with that? He literally thinks his kiss is a lifesaver. Yikes. He looks like he did P90X and maybe got some facial sculpting, and he’s now experimenting with his personality by going by “Prince Philip.” Just a heads up: We still know it’s you, Charming. The consent issues are back and better than ever. You can’t have a good partnership if one person doesn’t respect the other’s bodily integrity. And he still ends up moving on to Cinderella. What the fuck is wrong with this guy? Aurora doesn’t even know this, but he was engaged to someone else at the start of the film. Mess mess mess.

If she had any female friends (not including her three elderly personal assistants), maybe she’d have the strength to get away from all the users in her life and meet someone normal for once.

This dick again? Look, Cinderella, you overcame the trauma of losing your mother, then your father, then being abused by your stepmother and her shitty kids. You have a Temple Grandin-like ability to commune with animals, and you have your own job. Why waste your time with some trust-funder with a horse? Prince Dumdum doesn’t even remember what you look like. When he does come up with the Colombo-like idea to make all the barely legal hotties in the kingdom try on a shoe someone left at his rager, Cinderella plays coy. Hiding your true self is a sign of immaturity when it comes to dating.

They are sort of cute together and enjoy each other’s company, but it seems like she’d be better off going to therapy for a few months before getting into anything serious.

These guys are by far the hottest of all Disney couples. He’s like 11 times her size, which is the straight ideal: Man big, woman small. It’s all very heteronormative once you get past all the cross-dressing.

While Mulan did join the army under false pretenses, she did it because it was what she wanted to do with her life, which takes the whole “rebellious princess” thing to another level. She met Shang after she bravely followed her dreams (with the help of a sassy dragon and lots of ghosts), which is way healthier than all those other princesses who sacrifice their true selves for their men.

We don’t get to really see how they are together, but the rate of intra-military divorce goes down during peacetime, so these two might just have a shot at a normal life.

She’s super sheltered and talks to her cat, and he’s worldly and talks to his monkey. They’re different, but the same! Sure, she’s rich, but somehow his apartment is way nicer than hers. A loft apartment with a view is much more desirable, IMO.

Both are kind to their pets which is a good sign for how they’ll treat their partners. She’s sexually coerced and he doesn’t shame her for it. He does lie about who he is, but like, who doesn’t during courtship? Lots of guys say “I work at a big law firm…” without saying “…in the cafeteria.” They eventually get past the transgression—now that’s a functional relationship.

These two are the best people on this whole list and they’re not even people. The two start off as friends, which is the best way to start any relationship. They can laugh about the fucked up fact that they were betrothed when they were babies (which most fans forget about, but I happen to have Googled it), and Nala encourages Simba to return to the kingdom to win it back from his douchebag uncle. Being able to overcome weird shit and encouraging each other to be their best selves is the very definition of functional.

Also, their physical chemistry is off the charts. Can you imagine having a connection so good that it literally spelled out “SEX” in a bunch of nearby leaves? That would be terrifying, but since it’s a cartoon, it’s amazing.