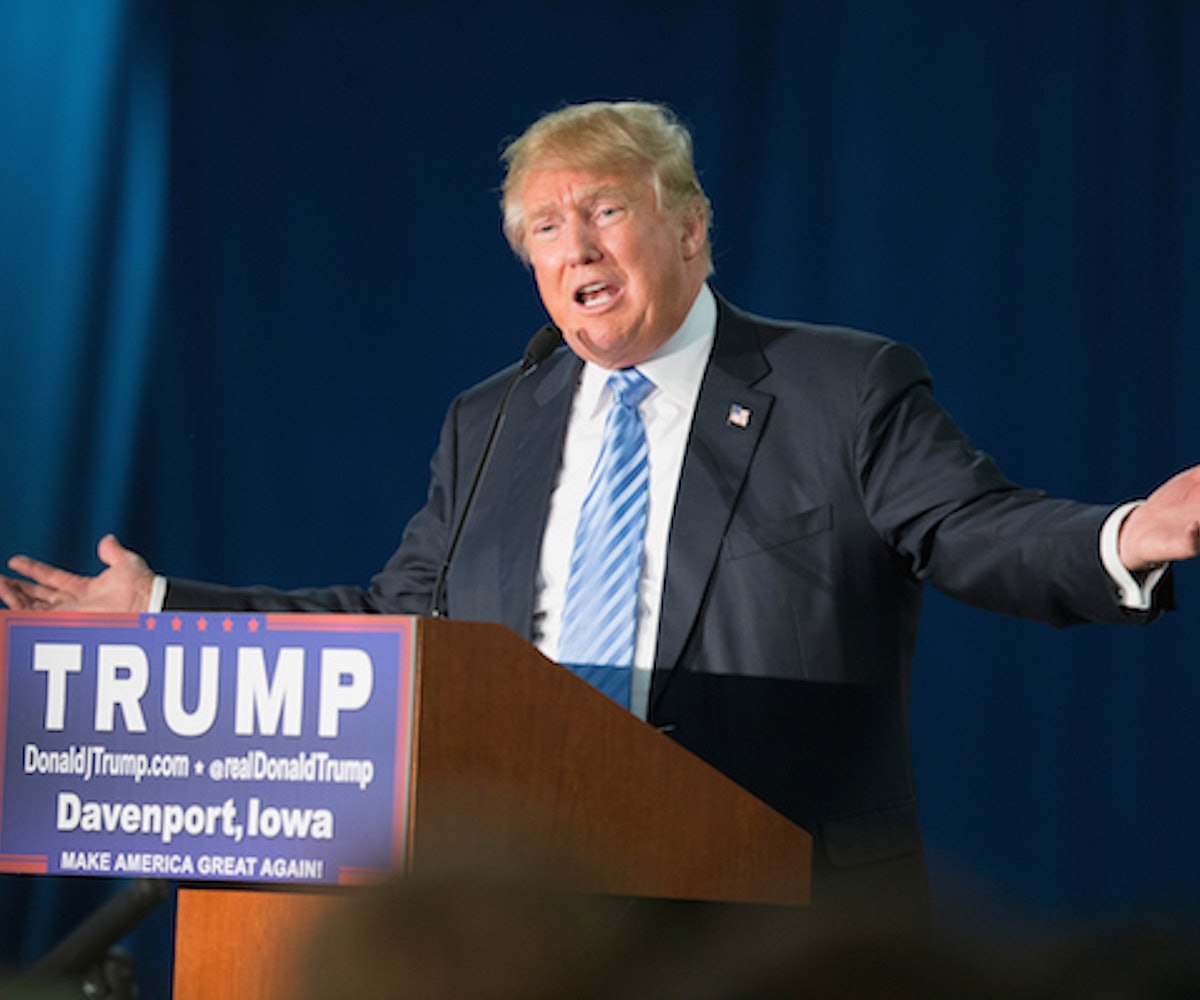 By any objective definition of the word, Donald Trump’s various comments about Muslims, Latinos, Jewish people, and, in the past, African Americans, are racist. His behavior toward physically disabled people, the financially disempowered, and American prisoners of war are callous and derisive.

Trump will tell you straight to your face that he’s one of the "least” bigoted people you could know (yes, he actually said that) and that his positions are merely a countermeasure against the political correctness that is, to him, is one of the biggest problems in the United States (yes, he actually said that, too). He’ll also tell you his branded 400-thread-count sheets are the most luxurious in the world, but that would be a lie, as well.

Regardless of how he and his various supporters angle his comments, however, a dispassionate look at them reveals a dark strain of ethnic intolerance, cultural ignorance, and needless bullying. But you know this. We know all this. Trump is dangerous and throughly un-American in his values and actions, rising in popularity, and something must be done about it. Even the preponderance of Republicans are saying as much.

And yet, what can be done? For months now, we have sat here on our hands with almost no power to effect or slow his now very disconcerting rise. Yelling into the internet via social media does nothing, just as fervent support of other candidates, talking with like-minded friends, or even engaging Trump supporters does nothing more than underline the powerlessness of those who would oppose what he represents. It seems there’s just no winning with this guy. However...

Michael Moore, for all his faults, suggests there is indeed one simple, interesting thing you can do to respond to Donald Trump.

Facebook prohibits all its users from using hate speech on its site ("You will not post content that is hate speech"). I... Posted by Michael Moore on Wednesday, 9 December 2015

That may seem a little petty and underwhelming, but for a social media-borne figure, it might not be (no less than Bill Clinton has dubbed Trump the “Instagram Candidate”). Anonymous, the politically active, semi-anarchist hacker collective has seen the value of this approach as well, announcing and embarking on “Operation Trump,” a series of coordinated attacks against the candidate’s digital presence. Also, it allows those passionate about politics who aren't able to vote yet to feel like they are doing something actionable.

Further, the leaders of both Google and Facebook have expressed disappointment with Trump’s comments and an interest in excising hateful speech from their platforms either through unilateral, top-down enforcement or bottom-up user activity. Twitter itself has a healthy—if completely overwhelmed and only somewhat effective—initiative in place to address hate speech and other problematic issues, as well (though, with ISIS and other entities using their platform, they may not have time for Trump).

Beyond that, the question of abridging Trump's right to free speech isn't a valid issue here, regardless of whether it's hate speech or no. Thomas Keenan, Professor of Comparative Literature and Director of the Human Rights Program at Bard College says, “There's no legal definition of ‘hate speech’ in the U.S. because it's (currently) legal to say hateful things here. The post-WW2 era Supreme Court has pretty much adopted an anything-goes policy.” He continues, “This doesn't prohibit private organizations from blocking various kinds of speech, though. The First Amendment, generally speaking, only prevents the state from preventing speech.” Despite what Trump supporters may, you’re not trampling on anyone’s rights when you attempt to prohibit comments on social-media platforms.

Moreover, Professor Keenan remarks that Trump’s comments do indeed fall under the definition of hate speech as outlined by the International Covenant on Civil and Political Rights, a 1966 United Nations document that, while often cited, has no legal standing in the United States. It’s only a guide, but perhaps the best one we have. “Advocacy of national, racial, or religious hatred that constitutes incitement to discrimination, hostility or violence,” certainly sounds like what Trump has been cooking these many months.

So, yes, it is indeed possible to have users address intolerance on various social-media platforms with a simple click. These mechanics are in place and you are ethically, legally, and otherwise in the clear. But...

Indeed, you can go ahead and tag Trump and his followers all day every day and it would have an interesting and profound effect on the dialogue around him, especially if the response was overwhelming enough that Facebook was forced to act. These little rebellions are what make the landscape of social media so interesting. The effect, however, might not be everything you wanted. Trump and trolls in general have a way of using the defenses we put up against them in their attacks. From the MRA bros to nastier parts of Twitter, blocking has often led to increased comments and a more powerful—if misled—sense of righteousness. As well, closing down avenues of discussion doesn’t solve the problems within that debate—it merely postpones or hides them in places where they can fester.

Keenan says, “Would banning Trump from Facebook be a mere symbol, or just encourage others to step into his place? It would be a big symbol, not a mere one. And it would definitely produce a massive response, on both sides. In real political debates trolls are not going to go away.”

He continues,  “I am still persuaded by the idea that the best response to speech is more speech,” says Keenan, “that when extremists of whatever stripe try to close things down the best answer is to open more of them up.” In fact, it feels quite Trump to hope that he is banned on the account of hate speech. Keenan's point that shutting down voices has never made anyone more free is a valid—albeit frustrating—point.

So, yeah, what the hell, do it. But be honest yourself and admit that blocking and tagging might not work, that nothing might work, until the voting booths are open and we really get to see how effective America’s first Troll Candidate really is. Moreover, as much as you may dislike Trump and everything he stands for, you probably don't really want to be living in a space where we shut up and shut out opinions you don't want to hear from people you don't particularly like. That would be a very Trump thing for you to do, after all.

NEXT UP
Culture
6 Shows To Binge Once You've Finished 'The White Lotus'
Culture
Who Won At The 2023 Grammys
Astrology
February 2023’s Full Snow Moon in Leo Embraces The Real You
Fashion
Jenna Ortega Is The Face Of Adidas’ Newest Line
Style + Culture, delivered straight to your inbox.