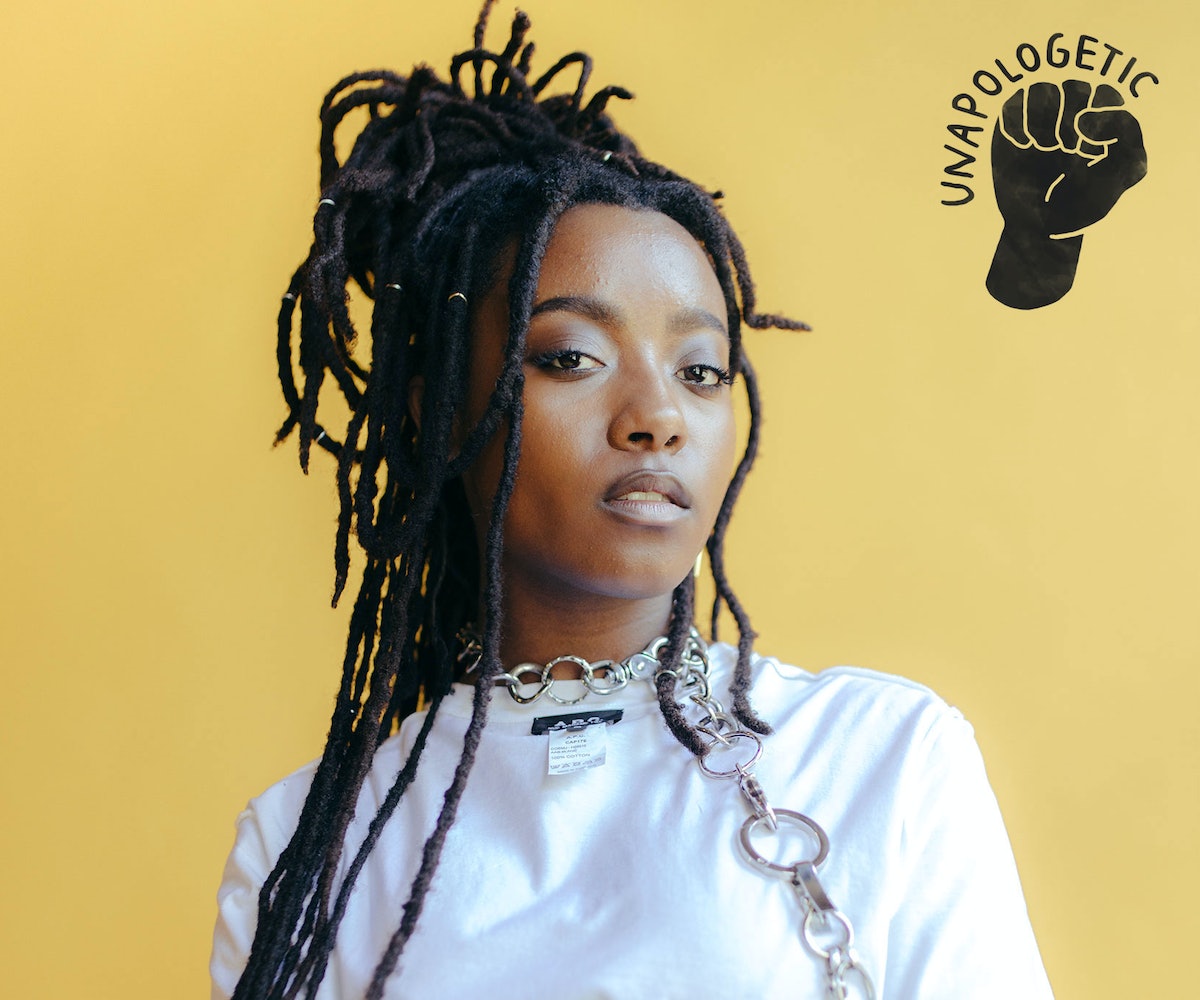 Black hair is politicized, whether intentionally or not. A young woman’s decision to go natural might have nothing to do with pushing back against the Euro-centric ideal of beauty, but it will be viewed as such. Conversely, one might decide to wear a weave or straighten their hair because it’s more conducive to their lifestyle, but people will think these moves have their own political motivations. The backstory, often, doesn’t matter; if you’re black and have hair, what you choose to do with it is going to be placed under a microscope. And there’s perhaps no other style that undergoes more scrutiny than dreadlocks.

The precise origin of locs is hard to track. According to some reports, the first recorded sighting spans as far back as 2500 BCE. The style was also found to be present during Ancient Egypt, with anthropologists discovering the style on mummies. Hindu men during the nineteenth century were also loc-wearers, and biblical Samson was is said to have donned the style. But while the look has a long and storied history around the world, it wasn't until the rise of Rastafarians in the 1930s—and, later and significantly, Bob Marley—that dreadlocks were widely popularized in the west. Rastafarianism is a religious movement founded in Jamaica; their hair was viewed as an extension of their rebellion, and is also thought to be emblematic of Rastafarians' spiritual journey.

In the ‘80s and ‘90s, cultural icons like Whoopi Goldberg, Jean-Michel Basquiat, and Lauryn Hill helped normalize the style and introduce it to popular culture. In turn, its rebellious label started to unfurl; with more exposure comes acceptability—if only in certain spaces. Bert Ashe, professor of English and American Studies at the University of Richmond and author of Twisted: My Dreadlock Chronicles, explains:

There are a lot of restrictions given to the person holding one of the highest offices in the world—especially if that person is black—so this might be a grand example. But the same restrictions are put on those in “smaller” offices, also. In September, the 11th U.S. Circuit Court of Appeals dismissed a case brought by the Equal Employment Opportunity Commission against a company that refused to hire a woman because she wouldn’t cut off her dreadlocks, sending the vile message that wearing your hair in its natural state could cost you a job, which is a fact many black women have known for decades. Just look at the recent Implicit Association Test hosted by “The ‘Good Hair’ Study: Explicit and Implicit Attitudes Toward Black Women’s Hair.” Findings show a strong bias against “textured” hairstyles, which were viewed as being “less beautiful, less sexy/attractive, and less professional than smooth hair.”

“In the workplace, you have to be aware of what the norms are and then decide that you either want to push back at them or accede to them. On some level, the acceptability of dreadlocks cannot be denied, but only to a certain extent," Ashe says, "because if you're wearing short hair and neat hair, you can dress anyway you want, change into official attire and be accepted for who you are. And there are certain hairstyles—and dreadlocks is one of them— where it's not accepted on that level.”

Which is a nice, if not inevitable, segue into the appropriation conversation surrounding the style. A role call of instances in the past two years include: Marc Jacobs sending white models with faux dreadlocks down the runway last season; the Blonds doing the same a season prior; Kylie Jenner donning them two years ago, followed by Miley Cyrus seven months later. All were met with backlash.

The decisions were poorly thought out at best, but Ashe explains it’s not entirely their fault. Black people do cool things, and white people like to raid their cool things and claim them as their own:

They attempt to participate in what they see as a phenomenally attractive cultural display, and that display is blackness. They want to "play." They have no sense of how offensive that play can be to the originators of the style, and sometimes when they do become aware of how offensive that is to certain members of the originators of the style, they shrug and say, ‘well, I like it,’ and end up doing it anyway.

The dismissal is why most of these appropriators end up in hot water. (That, and when they employ the off-base counterargument of “well, white people don’t say anything when black women straighten their hair or dye it blonde.”) We saw it with Marc Jacobs’ half-assed apology, we also saw it with Giuliana Rancic’s PR-friendly response to her comments about Zendaya’s faux dreadlocks at the Oscars in 2015. In all of these cases, though, they can get away with their mishaps because of one thing: white privilege. It’s the reason why we all move on to a different news story the next day, why they still have jobs—with their reputations more or less intact—and why instances like this continue to happen.

But it’s also the reason why, when white people attempt to adopt a style that has historically belonged to a marginalized group, it’s viewed as damaging. Ashe explains:

It's because of the historical power in equities that have been in play in this country, since we arrived here in 1619, until this very day that I'm talking to you right now. It's hurtful and painful for black folk to innovate and to be creative, whether it's with hair or other cultural forms, and have those that have the cultural power simply adopt those forms as best they can, as if we're on an equal plane, when we're not. The difference between Zendaya and Kylie Jenner is white supremacy. That's really all it is.

Not to mention the difference in reactions when a white person wears the style (trendy!) and when a black person does (probably smells like weed!).

People’s relationships with their dreadlocks differ. Singing sister duo Chloe and Halle tell us that they have an affinity toward wearing their locs in bantu knots or braids, which results in wavy tendrils. When asked, Halle says that her locs represent her in her “truest form.”

One of the models for our photoshoot, Aliya Will, often accessorizes dreadlocks with gold and silver rings. Her decision to embrace the style stemmed from her brother. “Constantly watching black girls with dreadlocks, afros, cornrows, being slandered in the media, restricted from career paths, and labeled unprofessional in the public eye,” motivated her to stick with it, she explains.

In a speech given on Founders Day in 1987 at Spelman College, Alice Walker opened up about the moment she knew she wanted dreadlocks: “Eventually I knew precisely what hair wanted: it wanted to grow, to be itself, to attract lint, if that was its destiny, but to be left alone by anyone, including me, who did not love it was it was.” Ashe, too, first loc’d his hair as a form of rebellion.

Every loc wearer has a different approach to their hair, all come from different backgrounds, with different experiences. In some instances, the only thing they might have in common is their locs. Regardless, society will lump them into the same monolithic category.

People make assumptions, often, on falsehoods; relying on fake news, if you will, to cast judgment. And despite the attempt to break down the stigma of dreadlocks, it will always be twisted up in misconceptions. And, as history shows, we put up walls up around things we don’t understand, or care to try and understand. That ignorance turns into fear, the fear fuels hate, and the hate leads to exile. Will the style ever make it out from under its otherness? Ashe hypothesizes that, in order for that to happen, society's standards would have to shift. Given that the black way of life will never be the bar others hold themselves to, that’s unlikely to happen.

"We will always have a way of looking at what is classic, western respectability in terms of hairstyle, in terms of clothing, in terms of bearing, in terms of speech patterns," he explains. "Even though they will continue to shift, and we don’t know what they’ll look like in 150 or 200 years, it’s hard for me to imagine that a way of wearing hair that African-Americans do with dreadlocks will somehow become respectable in a culture that has spent a good 200-plus years defining itself against blackness in a certain way. Having that flip itself and suddenly have—or gradually have—black cultural forms become the mode of respectability is a hard thing for me to imagine."

Cue Solange’s “Where Do We Go,” amirite?

Other people’s prejudice shouldn't stop us from admiring the natural style in its natural state, whether it's by way of our beautiful models or of Ava DuVernay or Professor Ashe, or, for that matter, that girl or guy you saw on the subway. And it definitely shouldn't stop someone from getting dreadlocks themselves. Toni Morrison once said that the purpose of racism is to serve as a distraction; trying to persuade racist people of the validity of your choices as a person of color is a waste of time, and selectively picking battles is important. When it comes down to it, take comfort in knowing that the copycat will never be as good as the original. We’ll let Ashe play us out: "For me, I'm heartened; and there's a response of ‘Go ahead, you want dreadlocks? Twist your hair into dreadlocks, white person. But, your hair's not gonna look like mine.’ And I'll just sort of shrug and keep it moving.”