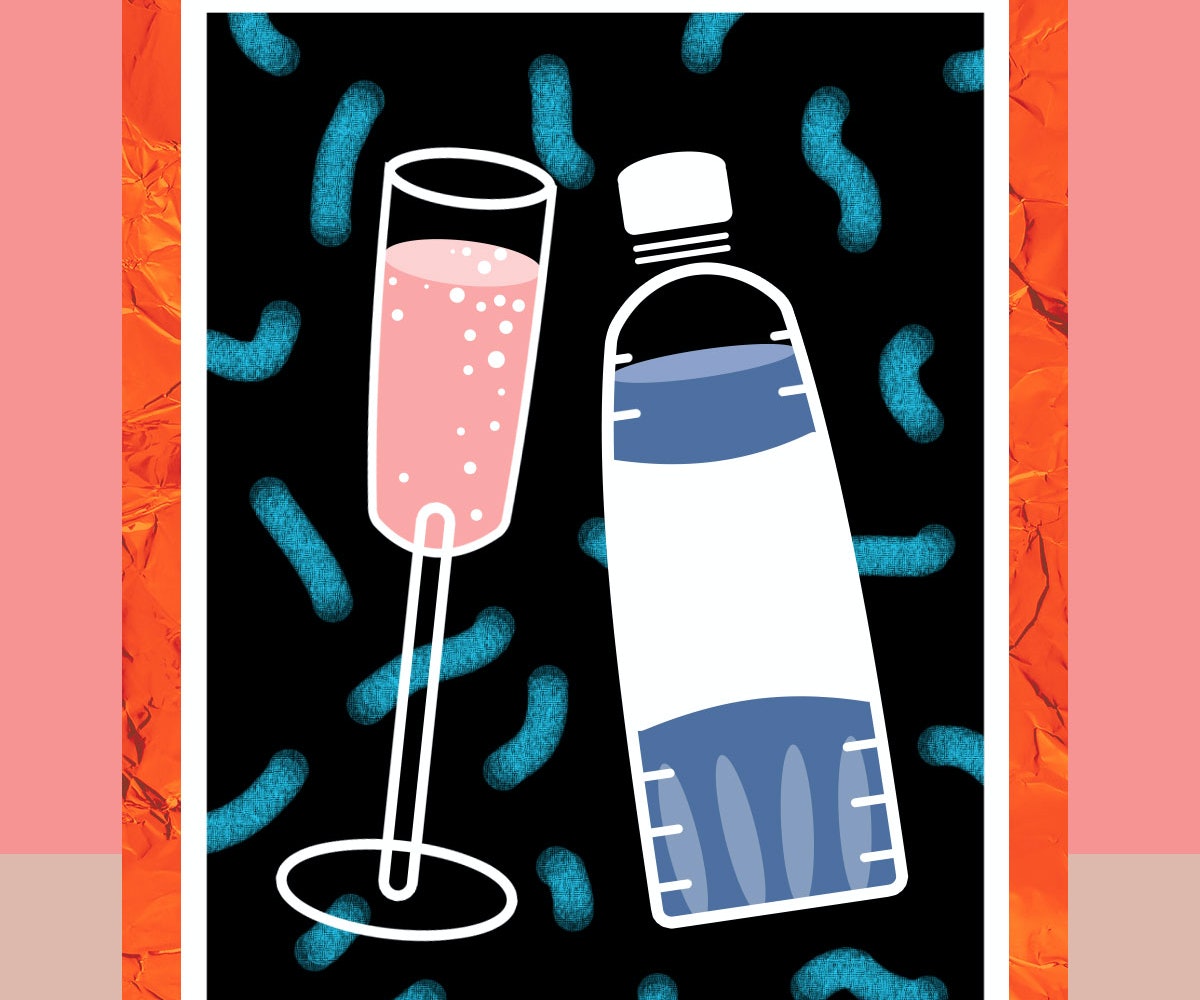 “I’m so so sorry. I’m so sorry!” My apology was a straightforward plea; it had none of the sharp edge of demand that some apologies do. This was because I had no expectation of forgiveness; this was because I had vomited out the window of his moving car, spraying its exterior with what seemed like a gallon’s worth of champagne and gin and a little bit of seafood, filling its interior with a miasma of the same.

He looked at me and laughed. “It’s okay. We’re almost home.”

Most alcoholics can tell you the last day they had a drink. Maybe it's a story of hitting rock bottom, drinking to such a degree of excess that they knew they had a choice between their addiction and their lives. Or maybe there was no rock bottom. Maybe there was just an infinite plateau, and rather than continue on that endless path, they took a leap into an uncertain future, not sure if they would fall, hoping that they'd find their footing and climb higher. Or maybe there's no clear-cut story to tell at all; the only clarity comes in recognizing that there was a before and an after, and a definite delineation between the two times.

My boyfriend's decision to stop drinking is his own. There is, of course, a story attached to it, but it's not mine to tell. Not here, not now. His story becomes our story, though, in the many months that have followed his decision to be sober, a decision that was made relatively early in our relationship, though not at what would be called its beginning. In fact, it's hard to know now if there even would have been a beginning if both of us hadn't been drinking to start off.

There’s a thing that happens in the first days of a relationship, a recognition. Opposites attracting proves to be little more than a toothless fallacy, in my experience; rather, what has drawn me closest to the people with whom I find myself bound—for an hour, for weeks, for years, for a lifetime—is discovering those things in them that don’t feel like discoveries at all. Instead of delighting in the revelation of the unknown, it’s been the uncovering of what we already share that makes me want to get closer—as if we’re already well on the way to understanding one another, even if we’ve only just met.

This type of recognition goes beyond the superficial. It’s not about a shared hometown, alma mater, favorite sport team, or food; it’s not always not about that, but the type of mutual identification that happens between two people who are on their way toward moving closer to one another tends to supersede the categories through which dating apps make interpersonal connections. While those types of shared experiences often facilitate easy conversation, it is a different type of recognition that I think not only draws people together but then keeps them close. It is the recognition that while there might be some things they like to do as a couple, they are also fully capable of doing nothing, together.

And for us, our version of doing nothing, our courtship of eating and drinking and talking and just being, flew by faster—was lubricated, you could say—by the drinks we would order together at restaurants and bars, the bourbons and ginger ale (for me) and Coke (for him) that we would mix up at home each night we spent together. And during all that time, he was always the one who drank more; he could lap me with our simple homemade cocktails in my apartment, and would often drink more than me when we were out. In the weeks leading up to his last day of drinking, I had started to limit my own drinking, especially when he and I were together. It wasn't that this activity which had, probably, facilitated aspects of our relationship was causing problems, exactly, it was more that the general viscosity of our relationship had changed; instead of speeding forward, we now felt stuck. Something had to change, and something did.

When he stopped drinking, the stickiness went away. Nights developed a new rhythm, one that didn't rely upon the familiar clinking of ice into glasses. Since he had quit drinking entirely, my drinking started to fall off as well. When we were alone together, I rarely had any alcohol at all; a glass of wine at dinner, maybe two, but that was it. The thing about continuing to drink when your partner is sober is that it isn't—or, wasn't for me—such a complicated thing, as long as I was only with my partner. If our lives took place in a bubble that fit just the two of us, there would have been no problems. (Or, at least, it's pretty to think that way.)

But there was no bubble, and while I didn't drink that much in general, and certainly not while we were alone together, those nights when I would go out with friends, including the times when my boyfriend was with me, I would drink as much as I ever had, only with a newly lowered tolerance for alcohol. Most of the time, this wasn't a problem. And then, sometimes, it was. Nights when I would come home from work, after having been drinking with friends or colleagues, were nights when I would enter our home preemptively defensive, even when no aggressive questions were asked, no eyebrows raised. I knew I wasn't doing anything wrong but, then, what did wrong even mean? There was no inherent morality to drinking or sobriety, no matter how much it felt that way. And yet I found myself feeling guilty nonetheless, despite not having anyone accusing me of anything. And nights when I was out with my boyfriend and other people, I felt uncomfortable when I would pour myself an extra glass of wine, feeling as if I were betraying some essential aspect of being in a relationship, destroying the symmetry that couples are supposed to have. Did there have to be a problem with my drinking when my partner was sober? Perhaps not, but, for me, there was.

Even though I'm not an alcoholic, I do remember the last time I got really drunk, the night I drank too much champagne, topped it off with a gin and tonic on an almost empty stomach, and found myself hanging my head out the passenger side window of my boyfriend's car, apologizing in between bursts of vomit.

"I didn't even drink that much," I sputtered. "I wonder if I had a bad oyster." (I did not have a bad oyster.)

The raised eyebrows that were so rarely on my boyfriend's face when I had been drinking were suddenly there. But he told me everything was okay, and when we finally got home, he did what only someone who is truly in love would ever do: He ushered me inside, so that I could take a shower and crawl into bed, and afterward stood on the street, hosing off his car at one in the morning, nodding at neighbors walking their dogs along our street.

He didn't make me feel guilty about that night, and so what I wound up feeling wasn't exactly guilt. Rather, I had a new awareness, a recognition of who I wanted to be in our relationship, and what would be needed to have the kind of parity that is necessary for a successful partnership.

The thing about addiction stories is that they tend to resolve in one of two ways: death or sobriety. This is true of fiction, anyway, and often enough, it’s true in real life too. Addiction stories are narratives of extremes. The thing about relationships is that they tend to function best when they have at their center a state of compromise—the antithesis of anything extreme. Reconciling these two polar opposites is complicated. During the almost two years of my boyfriend's sobriety, I adjusted parts of my life, but not all of it. I'd felt that it wasn't necessary, that because my nights of heavy drinking were few and far between they wouldn't be a problem. And maybe they weren't, exactly. Maybe they weren't a problem for me, but they were a problem for us, and not because we weren't sharing the same experience, but rather because what we were sharing was sometimes tainted by me, you know, throwing up everywhere. (Okay, that was one time, but one time is enough.)

I am not sober, and I don't foresee a time when I will be. But since that night in the car, I've made the decision to limit my drinking, even when everyone else around me is going for that extra round. There is nothing prescriptive about this; I would never recommend anything as an absolute course of action for someone else's relationship or personal life. But for me, the change that's happened in my relationship, this roundabout return to a mutual recognition and a shared experience has been invaluable. Being on a similar page means that when I see my boyfriend across the room at a party, my eyes aren't clouded; a night out with friends will never lead to me saying, "I'm sorry." Like in the early days of our relationship, a commonality is bringing us closer together, closer than we've ever been. And since our relationship story isn't an addiction story, but rather a love story, I'm glad we were able to find our path, a middle way, between two extremes.