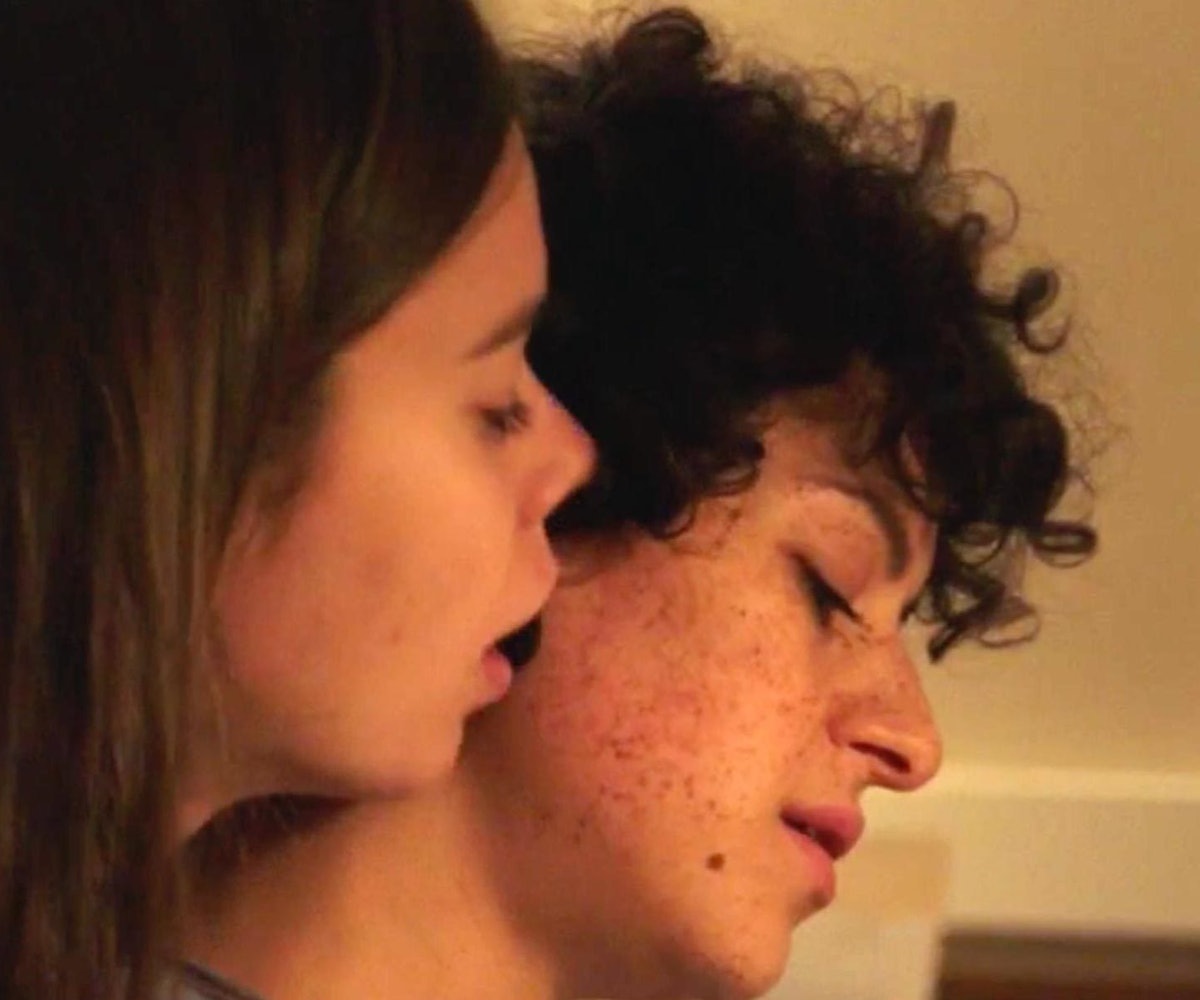 Photo via The Orchard

In Duck Butter, strangers Naima (Alia Shawkat) and Sergio (Laia Costa) embark on an experimental romantic bender, in which they spend 24 hours together,having sex every hour. Unsurprisingly, this marathon doesn’t go quite as planned, especially once romantic feelings emerge and emotional baggage starts to come out. Co-written by Shawkat and Miguel Arteta, who also directed it, Duck Butterexplores what happens when you naively give the most vulnerable parts of you to a complete stranger and expect it to work.

Filmed over the course of an actual, improvised 24 hours, Duck Butter explores the self-destructive tendencies of two people trying to call bullshit on the artifice of relationships, but who are really just lying to themselves. We spoke with Shawkat and Costa about the real-life inspirations behind the movie and how they prepared for such an intense, vulnerable experience. Read our Q&A, below.

Alia, can you tell me a little bit about co-writing the project? How did the opportunity come about?Alia Shawkat: Miguel and I had worked together years ago, and he approached me and said he wanted to write something together. We just started talking about terrible relationships we had been in, and also the obsession of them. We both had different experiences of getting addicted to someone, so we wanted to make a story about these kind of people that meet and throw themselves into it. Like, what happens when you ask someone to expose themselves? And then once they do, you're like, “Oh, sorry, I don't like that?” And how can you maintain honesty through that stage even though you're like, “Fuck it, let's throw all sheets to the wind and just go for it?”

It does relate to me a lot personally—wanting to fall in love, wanting it so much, and this idea of it. And then finding an identity in somebody else who makes you go, “Oh, she gives me permission to be myself.” But then you realize, “Oh, no, I'm the only person who could do that.”

I've been in a lot of dynamics where I just can't [be direct]. You know when someone's like, "What's up? Are you okay?" and you’re like, "Yeah, yeah, I'm totally fine. I don't know what you're talking about." And then the minute I'm alone, I'm like, "Oh god, how do I get rid of this person?"

So it’s like that scene in the bathroom? When Naima locks herself in there?

AS:Yeah, I've been in that bathroom heavily breathing a lot in real life, so it was kind of a healing experience to make a film about it.

It was important, too. At the end, there’s this beat where [Naima] has her fists clenched, and then tries to relax them, and then balls them up again. It's kind of like, you can have these crazy experiences and, at the end of the day, you change, but not that much. We all want to be like, “And after that moment, I never looked back.” But in this story, it's like, “No, you have moments with people, and you hope you learn a little bit next time.”

Laia, what drew you to this project?Laia Costa: The 24 hours. I actually was there for a supporting role at the beginning, and then I said to them, "I want the supporting role only if I can be in it [for the whole] 24 hours—just watching," [and it went from there]. In film, it's very hard to find something that you think that no one else is gonna ask for, and I didn’t think anyone else was gonna ask for a 24-hour shoot, nonstop... If someone asks me to do something that I think no one is going to ask me, [I want to be able to grasp the] unique moment and just do it, you know? Like, the first TV series I did back in Spain, they asked me to shave my head. And I thought, No one's going to ask me that ever, so I have to do it.

I didn't actually realize that you guys just shot the whole thing in 24 hours. AS: We did, yeah. Twenty-four hours, straight. It was really fun. There was a moment, after the first 12 hours, when we took a 20-minute nap while the second crew set up in my character's house. I remember waking up, like, “I really fucked this up. I'm so tired. How am I gonna do this? Whose idea was this? Why did do this?” And then Miguel told us to take a little jog down the hill and back, and from there, our energy just kept skyrocketing. It was so much fun... It created the right manic energy that the characters were going through, so it was really honest.

Alia, you talked about drawing inspiration from your own dating life while writing this. Laia, were there any parts where you improvised and drew inspiration from your own life, too?LC: You know, they wrote this script and, for a long time, they were very attached to it—some stuff is very personal. And my real life, it’s not that interesting at all. So when they said, “You can share real stuff with [us],” I had nothing to share. I have nothing to do with Sergio in my real life. So I just invented everything… I was just reacting to [their feedback about] this girl, so that was so much fun for me.

AS:She's in a healthy relationship and has it all figured out.

LC:My real life—I'm not crazy. I'm boring. I’m not Sergio. It's like, I was trying to take just some memories, but I had to also make them up a little bit.

How did you prep for such intimate, powerful interactions ahead of filming?AS: We had been Skyping for a while, because we had to wait to shoot until I finished another job. We had always been in touch for a while, but then we hung out for like a week before shooting. There are only so many things you can control [while filming], and you hope for the best. Especially with a film like this, where it's really just [two people]—it's all about our chemistry and our dynamic.

But right when we met, Miguel and I were just immediately like, “Oh, this is the team. We're set.” We were just able to really bond right away. And, yeah, Miguel and I had created Sergio, but she was not a real character until Laia came along. Then all of a sudden, it's like, “Oh, that's Sergio.” So once it came together, we just hit it off. And the whole rehearsal process was just super-fun, like just hanging out at my house and eating every meal together.

Was Sergio originally written as a dude?AS: Yes. It was originally a scripted [film] about a relationship over a year-and-a-half, about a guy and a girl. And then it evolved into a 24-hour improvised film about two women.

As you find out in the movie, “duck butter” refers to smegma. I’m curious why you chose such a visceral, in-your-face name for the title?AS:Duck Butter had always been the name. There's the scene where you see why the term comes up, but it just more and more kind of became the perfect name. In a way, the film is about two people asking each other to show the realest parts of themselves. And then, once they show it to each other, it’s like, “Oh, actually, that's too much.” We just liked the way it sounds, too. "Duck butter" sounds fun. Miguel and I would just say it all the time. We always thought it was funny and sharp, and I liked the way it looks written out in red.

It autocorrects on my phone to "fuck butter," which is apt.AS: Totally. That’s definitely a synonym for it, in a way.

Since this is a film about flawed relationships between flawed humans, tell me what the worst quality of each of your characters is.AS:Naima’s [problem] is that she’s tragically dishonest with herself.

LC: I would say the same for Sergio.

AS: Yeah, because, in a way, they end up having both the same flaws.

AS: We all show each other the best parts. And then, eventually, it crumbles.

Duck Butterpremieres on April 27 at the Tribeca Film Festival.