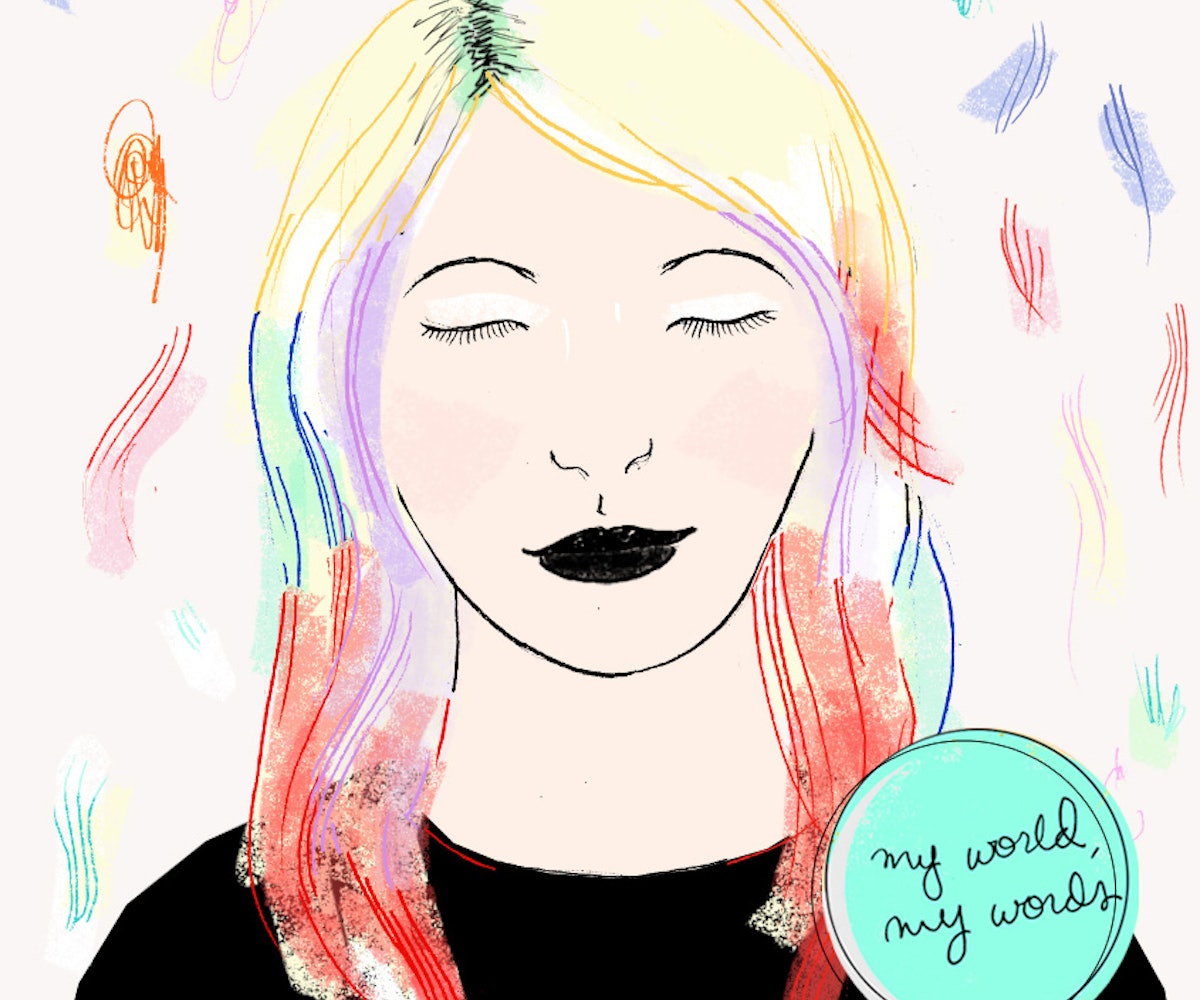 It looked like cotton candy and felt like pulp. It was clinging to my hairbrush in a way that, at first, was frightening but tolerable. But now I was three strokes in and the buildup looked like trampled grass. From the kitchen, I heard my boyfriend ask, “How does it look?” I didn’t respond, because I knew if I opened my mouth, I would scream.

The first time I bleached my hair, I did everything wrong: My scalp was going through a dry spell, and I’d washed my hair squeaky clean before heading over to my friend’s apartment. Despite her concerns about the bleach, I’d asked her to get on with it—and had scabs on the back of my head for months as a result. I barely remember the first night I spent my new hair, the occasion blurred by tears and plenty of cheap wine.

I woke up the next morning with a hangover and, after finally processing my new appearance, an addiction. For two and a half years, I’ve been consumed with the desire to dye.

I’ve waxed euphoric about my hair even when, at my lowest moments, I was furiously dumping Tide on dark purple locks to wash them out to lavender the night before my marching band formal. I remember being screamed at by my mother in the middle of a Bed Bath & Beyond to bring my hair back to a “normal” color; and once, a man on the bus yanked a fistful of hair, seemingly testing its hold on my head.

During that time, candy-colored hair has become as much of a style cliché as fringed crop tops or wedge sneakers. It’s become shorthand for a sort of “bohemian” or “soft grunge” spirit, and its relative ubiquity and laborious upkeep make it an easy target for judgment. How many times have I heard: “Oh, it’s so tough to maintain that color because it only looks good in the beginning!” and its faux-concerned counterpoint, “You really shouldn’t hide your natural beauty!” Yes, it’s tedious to maintain light colors when your natural hair color is jet black, and yes, I know my “normal,” healthy hair would probably look fantastic if I just let it be. I still somehow found it within me to carry on, and on, and on.

My hair became a signature of my “look,” complementing the bright prints and bold colors I prefer: Oh, there goes Lily and her rainbow hair and her rainbow dress and her rainbow shoes, and while two of those things had existed before the third, it was only after I bleached my hair that everything else fell into place. I became an “expert” on the ritual, applying bleach and dye in close succession by myself or by directing close friends. It gave me a deep satisfaction to tell people who inquired about my color: “Thanks, I did it.”

I shrugged whatever bad experiences I had off, until a month ago: I was careless with a new bleach formula and my shimmering blonde strands started falling away. Picking through the clumps of ruined hair dissolving on my brush, I had no choice but to consider the heart of my obsession. Because while I usually play off my colored hair as an extension of my sartorial whimsy, that’s a lie, and has always been so.

There’s been studies done about facial recognition and how it falters across race boundaries, but I don’t need a study to tell me something I’ve heard in person time and time again. “You all look the same,” the “you” pointed accusingly at me as though I chose my appearance; the “same” curling upward with a sneer.

For many people, all East Asian faces follow a formula: A porcelain, flat expanse with squinting almond eyes, ensconced in hair like a sheet of black silk. The descriptors I use aren’t accidental—they’re all things I’ve been told about myself to my face. To add to other peoples’ confusion, I grew up in an area filled with the sons and daughters of first-generation immigrants from China, Korea, Japan, and we were all mixed together, interchangeable iterations of the same basic pattern. I learned to respond to names that weren’t my own, to politely answer inquiries about “what” I am and where I am from.

One of my favorite paintings is Jennifer Hom’s “91 Good Chinese Girls.” It’s an unnerving image, but one that reflects both how I’ve been seen and how I’ve felt for most of my life. It is natural to me to think that I’m the girl with her hands clasped over her mouth, but to those who critique my hair, whether they’re strangers, friends, or family, the expressionless crowd is the tacit “normal” I’m supposed to embody. There is nothing inherently wrong with that, but my deviation from it serves as a warning—a sentiment best distilled by the man on the street who screamed at me: “Hey! You’re not fooling anyone!”

My race and the way it appears through my body are immovable, but I wanted to tear presumptions about my identity out from the root up, to be different in a discernible way. If people wouldn’t acknowledge me as my own person, I would brand myself with an immutable marker. YOU CANNOT MISTAKE ME—that is what I want my hair to say, even when more and more people, Asians and Asian-Americans included, make the change to unnatural color. But even still, color is my crutch, a means of recognition: You cannot, and will not mistake me. Please, don’t mistake me for anyone else.

My first bleach was cathartic; my latest one was savage. I managed to save most of my hair (thank you, coconut oil) and have been touching up my colors since, but the fear is still there; of losing my hair, sure, but also of losing a safety net I’ve now had for years. My chameleonic hair has become a way of communicating my dissatisfaction and struggle with my god-given physical appearance, and it’s not a coincidence that my period of greatest personal growth has coincided with my having colored hair.

It’s superficial, to ward against self-loathing by changing hair colors, but for me, for now, it works. I know I’ll bleach, dye, and question my hair in the future, as long as afterward, I can look in the mirror and see someone I could stand to be, unfettered from “normal.”