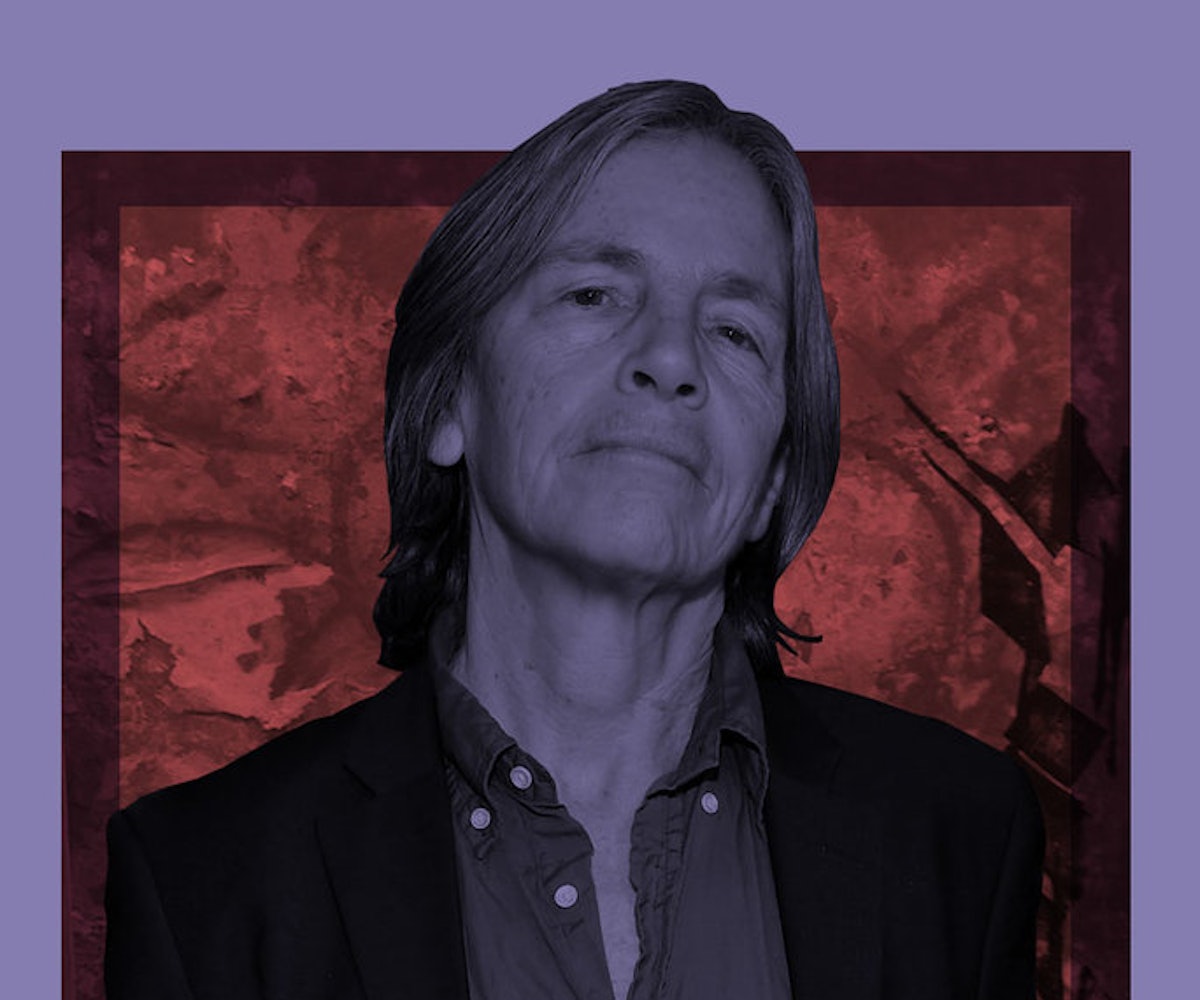 The power in Eileen Myles’ work lies in their eloquent, playful descriptions of the ordinary. In the detailing of the less often glorified experiences, like that of the connection between a human and a dog or eating a peanut butter sandwich, they’re capable of pulling the depth that few other writers can. In their art writing and use of less accessible topics, they’re capable of pulling the essence out and making the subject understandable on a gut level. In the '70s and '80s at the beginning of their career, this skill manifested in poems, but since the mid-'90s, Myles has been writing prose as well. Their new book, Afterglow: A Dog Memoir, reflects on the relationship between Myles and their first dog in adulthood, Rosie. Written on and off for 10 years, the book reflects on their relationship from multiple angles and incomparably materializes the imagination one uses when relating to a pet.

Along with the release of Afterglow, this year has seen the reissue of Myles’ Cool for You. Myles' first book of prose stories, Chelsea Girls, was brought back into print in 2015 after its original 1994 release, so this is now a familiar process for the writer. The books incomparably showcase the energy of being affected by friends and the city and coming to terms with one’s circumstances. Before the release of Afterglow, we chatted with Myles about dogs, gender, and social media.

Were you always writing the book with the intention of publishing, or was it more a way of coping with the loss of Rosie?

I think, as soon as [I started working on it, I knew it was for publication]. When you have feelings, and you’re a writer, one of the things you do with that feeling is you start writing. So I hardly ever [write without the intention of the work being published]. I mean, I write things in my journal and here and there and everywhere that no one will ever see, but generally speaking, it felt big instantly. I knew this would be a book; I didn’t know what kind of book. I guess the chapter Protecting You was when I was technically starting to write the book. I thought it would be a witnessing of her dying, I thought it would be just that, but I sort of ran out of gas on two chapters—that chapter and My God My Dog. Then I was just clueless for about a year.

While the "dog memoir" isn’t untrodden ground in publishing, this book seems pretty independent in terms of its depiction of one’s relationship with their dog without being too voyeuristic in the description of rougher moments, and also fully indulging that a relationship with a dog has a lot to do with imagining the other’s personality. Were there any other books or media that you feel inspired this?

No, I think it was just the actual nature of the relationship itself. After a relationship with a person, you’re left with this whole realm of private talk. I’ve never had a lover where you didn’t make up nicknames, and ways of talking, and jokes. You have your family, too. There’s just this mythology in life. I think what’s interesting, and maybe particularly sorrowful, with an animal is that you’re doing that with a creature that doesn’t talk, so you’re really left holding the bag. You don’t even wonder where they are now, and if they’re using that same language on someone else. In a way, I feel like it was just through really activating that part of my relationship with Rosie. ‘Cause all the time I had her, I really did feel like she was my dad. I just loved the idea of it, it made me happy. I wanted to hang out with my dad more. I loved my dog, and it all just kind of worked. It wasn’t until she died that I realized how much further I could really go with that. In a way, it just felt like the truest way of saying what the imaginary component of a relationship with an animal was in print. It felt like a real memorial.

The book deals with gender really directly. When you set out to write this book, did you know gender would play a big role?

I think I always touch on gender a lot, I just think it’s so unstable. For some reason, I just kind of thought of Rosie as a dyke and joked with my friends about that. It’s funny because even though I always thought of her as my dad, I never really thought of her as masculine. It’s just part of the land. There’s a part where a dog relationship is kind of queer. It’s just another kind of relationship, if you take it seriously, not just pet and master. Gender’s just there.

What was your experience writing the book about Rosie now that you have a new dog, Honey?

One thing [that's] really funny, that’s not in the book that I really like, is, before the book was out, I would be reading bits and pieces here and there, and I would be on panels. I would print out these pictures [of Rosie], and use [them] as a prop to talk about Rosie and the writing. Not too long ago, at my house in Marfa, I leaned [a big photo of] Rosie’s face against the wall right by the front door. It just sat there for a long time, and I liked looking at it. It was sort of funny because it was dog-level, and I did have a whole thing going on in my head about dog-level art that you put down there so the dog can look at it. But what happened is that Honey has friends—she has a male dog named Gunner and a couple of dogs in the neighborhood that would come into the house; I have a dog door. One day I came in, and [the photo] had clearly been pissed on. Rosie’s face looks like she’s crying, but it’s piss. It’s this feeling that the living dog smeared the dead dog, and insulted the dead dog, which is so funny because that’s my politic with poetry, too. We’re in the wake of John Ashbery, and he was my friend, and I don’t feel that way about him, but usually, my politic is to laugh at the dead poet. Here the dogs do, which I think is so great.

What has your experience been like with reissuing your older books and seeing new audiences approaching them?

It’s great! Chelsea Girls is a young book—it’s a book I wrote in my 30s about my 20s, pretty much. And now, I’m in my 60s. It’s really great because I think every writer is happy to have a younger audience. You don’t want to see an audience of people your age or older only. It suggests you won’t be read in the future. It’s very cool. The thing that’s very funny is that when we were in the course of trying to sell a dog book, despite the fact that I got all this attention and I’m a larger author than I had been before, publishers were not that interested in the dog book, they wanted me to write another young, raucous, adventurous book. It’s kind of like I’d been labeled a young writer. They wanted more of it! And I’ve got to say, it’s such a relief to be out there with a new book now. I’m even getting written about like someone whose old work is the thing, as if I’m not writing new work, but I’ve been writing tons of stuff at the same time. It’s just been that the work people know me from is from 20 or 30 years ago. I’m very happy to be moving past that.

In your older works, I don’t remember there being any writing about Rosie.

She’s in… I think it’s Inferno. There’s this whole part about her pissing or shitting, about her getting in that position. You know the patterns of her getting in position, and then she squats, and then for a few moments, you’re just looking at everything, because you don’t want to stare at her shitting.

Since you’ve been writing a lot of books that are mostly prose, do you still consider yourself primarily a poet?

I feel best to say I’m a poet. I think everything still comes out of that hole. When I was in high school, college, even grade school, I would write a poem because we studied poems in school. I could do it, I could make jokes. I liked the economy of poems. In school, I wrote essays, too—they were fun to write—but when I got to college, I was much more interested in writing stories. Poems were just kind of coming in a new way. I think after college, it just got to be the through line. I would have all these shitty jobs, and the world after college doesn’t seem any more professional than the world during college, but the through line started to be poems. I realized they were more portable, they were more convenient. I don’t want the poems to ever stop. If I’m working on a big book project, the poems have a funny way of being my procrastination or my escape. They always were that, even when the job was something I didn’t want to be doing. I always want it to be that way. Maybe it’s a gratitude thing, or an homage, to say I’m a poet. I guess Sam Shepard, interestingly, always described himself as a poet, Brecht, too. Poetry’s so weird.

Yeah, when I read your work, it still feels like poetry. It’s not poetry, but there’s still definitely the cadence and humor that is so particular to what you use in your poems. When I read it, it still feels very connected to poetry.

That’s absolutely it. In many, many ways it’s the same thing, but I’m just taking more space in a novel.

You use Twitter and Instagram quite creatively compared to many artists who use it mostly for self-promotion. Do you think that social media has changed your outlook on creativity?

I think I have to remember to write poems, in a way. It’s sort of like instead of having sex, you’re jerking off all the time. I think it really disperses energy. I love that because I’ve always carried notebooks, and I’ve often just written single lines down, but I think because they stay in the notebook, they go with other lines sometimes. I think by writing lines individually all the time, I miss out on writing sometimes. I was just in Europe a couple weeks ago—I was in Edinburgh, then in Denmark. Before I left the States, my computer died, and I had to leave it with somebody. I thought, Oh, cool. I’m just going to travel with a phone. Then, I got to the airport and my phone wouldn’t charge. I thought, Oh, fuck. The hotel where I was staying in Edinburgh didn’t have a business sector, they let me late at night go behind at reception and use their computers, but basically, I had nothing. I went there and I fell asleep, like you’re not supposed to do. It was actually so great. I read so much. I wrote so much, and I wrote this really great poem. I’m really kind of obsessed with the thought of taking a real serious chunk of time off from all of it, just having a landline and writing letters. I mean I adore it, I’m back [on social media] and using everything in a normal way.

Afterglow is available for purchase here