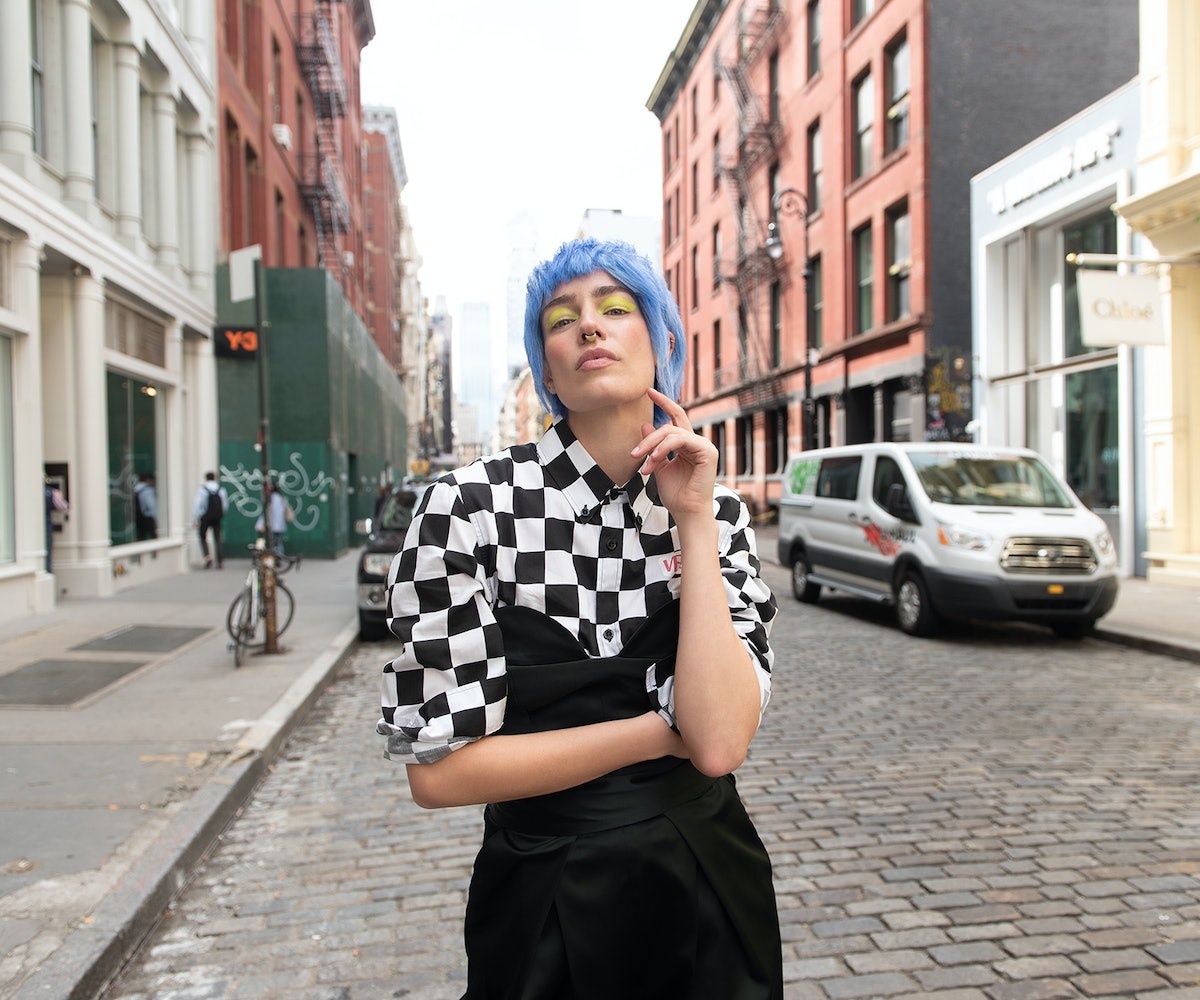 Elliott is wearing a Milly romper and top and a Versus Versace top and shoes. Photo by Daniel Rosenthal.

It's 2018, and it’s not that shocking to see a gender-fluid model walk down the runway—Gucci, anyone? And yet, for anyone who's been following fashion for more than just a few seasons, the change in what's acceptable when it comes to dismantling fashion's embrace of the gender binary is actually pretty revolutionary and really quite recent. Just ask model Elliott Sailors, whose almost-two-decade-long modeling career has taken many interesting turns, including one that took them from women's runways to men's and back again. This might seem like a dramatic step, but, if you ask Sailors, it was the most natural thing in the world.

"After cutting my hair," Sailors says, referencing their very public buzzcut in 2012, "I just got a lot more men’s work than women’s, and didn’t put an emphasis on getting work in women’s wear at that time. [To me,] it was obviously more new and exciting to do men’s.”

At first, Sailors says, it wasn't a big deal—at least not within the industry. But once the media latched onto the story, Sailors found that it was becoming harder and harder to book jobs, because some brands wondered if Sailors was wielding her gender fluidity as a publicity stunt, while other brands simply wanted to shy away from the media narrative.

And it wasn't just brands that were wary of Sailors, who says they were also criticized by the LGBTQ community, and still questions whether or not gender fluidity is fully embraced within it. “I think the queer community still has a long way to go in validating bisexual, sexually fluid, nonbinary, and gender-fluid people," they say, adding, "However, I do think that the U.S., in general, is doing a much better job of understanding LGBTQ+ people as a whole, and that my haircut from six years ago would certainly never gain any media attention today—it's become more normalized.”

But in much the same way that some greeted Sailors with skepticism as they walked both women's and men's runways, now people are questioning whether or not this normalization of gender fluidity is also merely a trend. While it's difficult to deny that there's plenty to be cynical about when it comes to fashion, Sailors doesn’t think that inclusivity is a passing fad—and even if brands try to make it so, it's our responsibility to guarantee that doesn't happen. Sailors says, “It’s our job as consumers to speak up; inclusivity of the spectrum will continue with gender, size, ableism, and race as we as buyers continue to respond positively to the inclusivity, and ask for more.”

Sailors has encountered difficulties in other aspects of the fashion industry too, having experienced an alarming number of sexual advances throughout their career. But Sailors thinks that the industry is making positive steps forward in terms of combating misogyny, and says, “I think that with the work of The Model Alliance, things are improving in the fashion industry. The RESPECT Program is gaining more traction and makes a tremendous difference as fashion publications, agencies, and other members of the industry also accept responsibility for the rights and safety of models and of each other.”

Another way Sailors thinks fashion is changing for the better is through the rise of social media. They say, “I think social media has played a huge role in creating safer spaces—being honest about what isn’t working and asking for more of what we want." Sailors, though, cautions, "It’s so important that we continue to go out of our way to keep being authentic in how we represent ourselves. It can be hard, too, because there are those who don’t respond well to us when we’re vulnerable and put ourselves out there in this way, but I think it’s easier when we look at it as more of something we do for others than for ourselves—we continue to speak in order to create safer spaces.”

While the industry is certainly a much different place than it was when Sailors first walked onto the scene, they feel that there’s much more to be done: “The industry is getting safer, models are getting braver in speaking out, and there are a lot more opportunities for models to feel safe in speaking up, but we still have a long way to go. It’s on each of us in the industry to take responsibility for how it goes."

Elliott is wearing a Chiara Ferragni jacket, a Nicopanda dress, and Versus Versace pants, shoes, and hat. Photo by Daniel Rosenthal.

Elliott is wearing a Marc Jacobs coat, a Versus Versace jacket, bag, and shoes, a Deveaux top, a DROMe skirt, and own earrings. Rings by Ayaka Nishi, Nina Berenato Jewelry, Indira NYC, and Avocet Jewelry. Photo by Daniel Rosenthal.

Elliott is wearing a Milly jacket, a Deveaux top, Adam Lippes pants, Cariuma shoes, a Nicopanda hat, a Versus Versace choker, Alexis Bittar earrings and bracelet, and own earrings. Photo by Daniel Rosenthal.