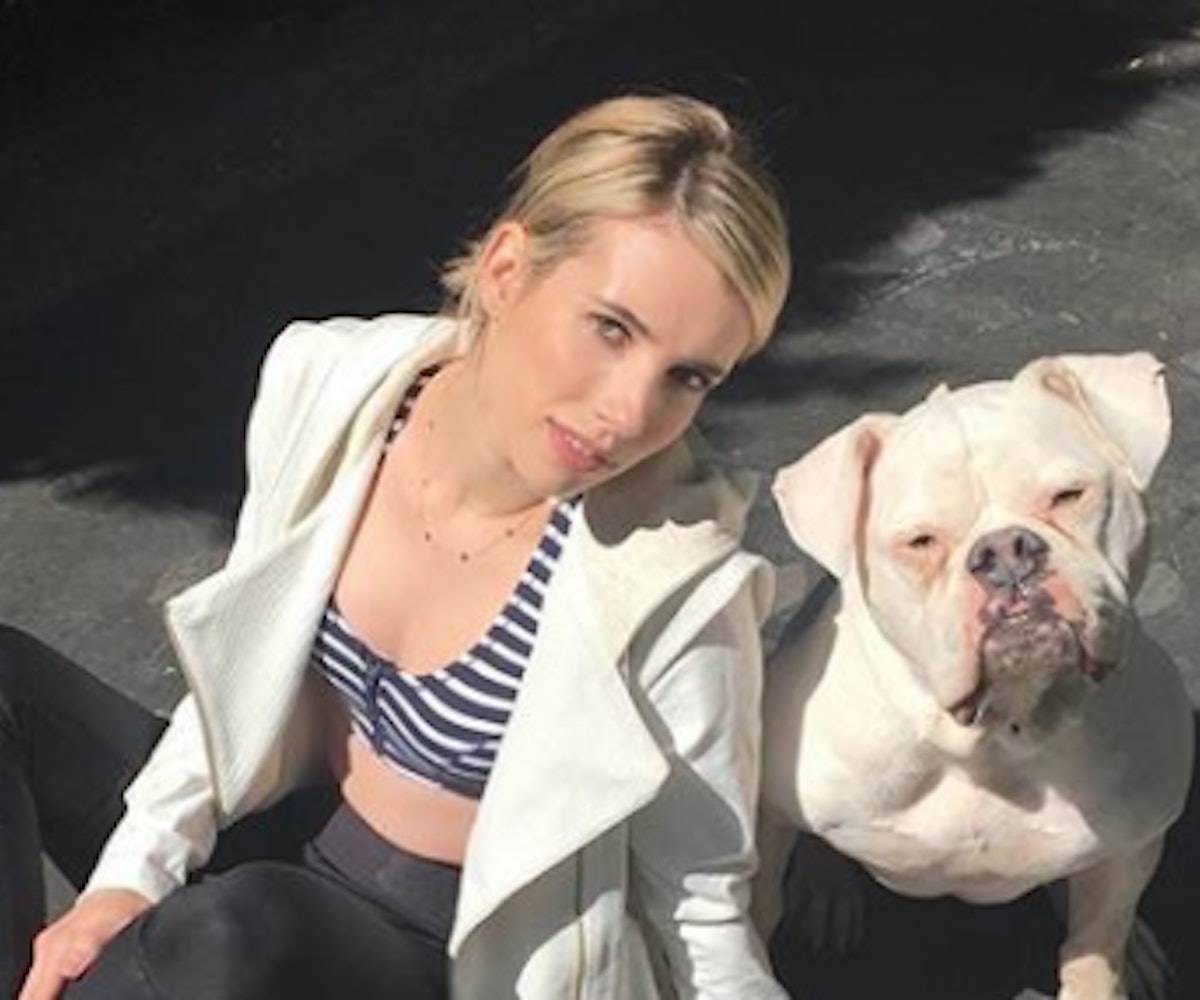 It's hard to pin down Emma Roberts' acting style, mainly because she has played a wide range of characters over the course of her career. If you're a young millennial like me, you were first introduced to Roberts as the painfully relatable pre-teen Addie Singer on Nickelodeon's Unfabulous or as sleuthy kid detective Nancy Drew. And though those roles thrust her into the tween limelight and turned her into a household name, it wasn't until Roberts began working with American Horror Story creator, Ryan Murphy, that she started doing truly transformative work.

"When I started working with Ryan Murphy, it changed my life," Roberts tells me over the phone. "I remember I would get the scripts, and I would be so blown away by the way he would write these female characters. They were so unapologetic, and he just gave me, as an actress, so much responsibility, and I was always very flattered by that. For Scream Queens, there would just be, like, five paragraphs straight of talking. It was intense, but it was so much fun to get to play such a likable villain."

Roberts' partnership with the director was such an incredible experience, she says, it affected the way she seeks out future roles. "I think that Ryan definitely set a very high bar for me because the dialogue that he writes is so amazing and original," she says. "He just writes the most amazing conversations between characters, so it was definitely harder to read scripts after that. But luckily I got to keep coming back and playing different characters in the Ryan Murphy world."

Even after accomplishing so much in her career, Roberts still finds ways to keep busy. She, most recently, was tapped by New Balance to promote their iconic 574 sneaker and, just last year, Roberts and her best friend, Karah Priess, announced that they would be starting a worldwide book club. One year and over 160k followers later, Belletrist has become not only an online literary hub but a special space for people to find new friends in real life.

"We have a lot of followers that actually do IRL meetups, which is always the most fun to see pictures from, and the way Belletrist is going, there will be a lot of IRL events to come in the future. We want to create a space where you're stepping away from the digital world but then when you go back to it, you have something to share. I feel, as a millennial, I'm always straddling that line between IRL and digital, and so we're finding a balance between those two with Belletrist, and it's so exciting to do that."

Ahead, we talk to Roberts about her personal style, the surprisingly simple book selection process for Belletrist, and her future endeavors.

Sneakers are definitely having a huge moment in fashion. Having recently been tapped to promote the New Balance 574, how to do you feel your personal style fits with the sneaker?

I was someone who always wore heels my whole life, and then, when I started spending more time in walking cities like NYC and New Orleans, I had to change my approach. I started wearing sneakers, and there was no going back because they're so comfortable. We're lucky now that brands like New Balance make sneakers that are comfortable but can also be worn as a style item with jeans. I love being able to wear a pair of sneakers to the gym and then also to lunch.

You've been doing a lot through Belletrist, in promoting and supporting women's voices. Where do you want to see the book club go?

Belletrist is my baby. I started it with my best friend Karah, and it's really just wanting to get stories out there and wanting to encourage people to read. I feel like we live in a time now more than ever where it's so important to be informed and to be smart, and if I can promote that in any way through stories, that's really important to me. And I think it helps people connect with others. I started reading so much because my friends and I would stay in touch that way when I would go away and do movies. A common thread would be if we were reading the same book and it was something to talk about, and so I wanted to kind of share that with my fans and followers. And we're just blown away by the response to it. So, it's been so much fun to get to see how much people want to read and want stories and they're looking for an outlet for that.

How do you select the books each month for Belletrist?

Everybody asks us that and they laugh at our answer. We want to keep the door open to everyone feeling like their book is a possibility, where we don't want to say we're only picking books if they are this, this, and this. Basically, if the book is good, if we feel like it's better than the rest, then that'll be the one.

What book has been your favorite?

One of the books we picked in January, The Immortalists by Chloe Benjamin, has become one of the best books I've ever read in my life. It just touched me so much. I think it's tricky saying what makes a book good, other than that it moves you and you just love it and want to recommend it to everybody.

Is there a particular moment from the book that made you feel that way?

I just love the way that the characters are woven into the story together; it is so detailed and so smart. It's a delicious read, I don't know how else to say it. You cry, you laugh, and it all connects in the end. I love when something comes full circle in a book.

What are you currently working on at the moment?

I'm about to go to Spain to do a movie called Paradise Hills. And I'm so excited for it. It's a crazy story. I can't really say too much about it, but it takes place in the future where young women are sent to a reform school if they don't comply to what a woman is supposed to be. And not everything is as it seems at this school. And the director is a woman named Alice Waddington, and I just fell in love with her and her vision for the project. She's my age, and she's directing it, and it's based on her ideas, so I am so excited that I get to bring it to life with her.