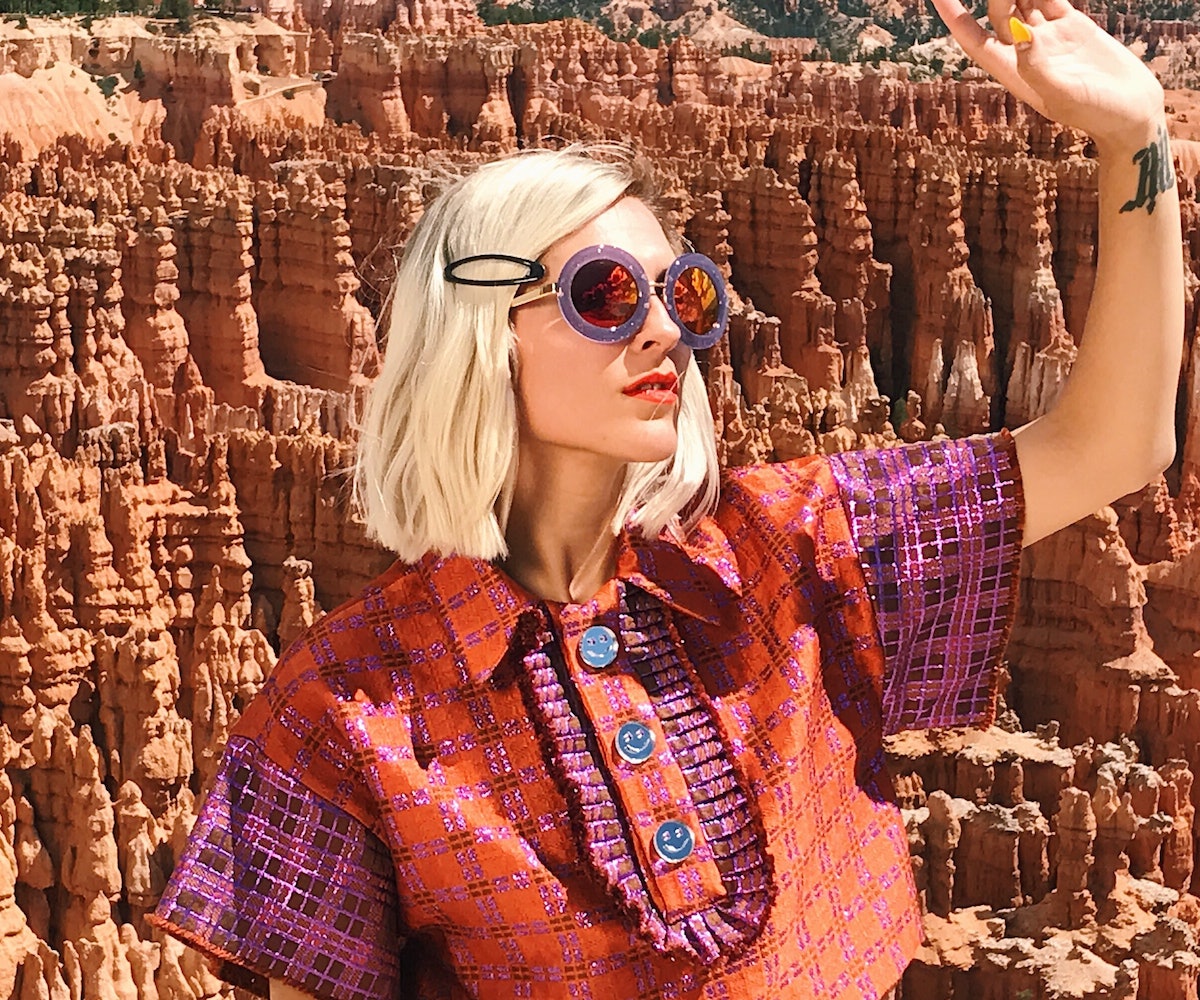 “Perversely sophisticated.” “Exaggerated and intellectually charged.” “Simultaneously satirical and sublime—a serious joke.” One can’t quite put a finger on the refreshing appeal of Erin Robertson’s aesthetic, but many have tried.

Robertson, a Boston-based designer and last season’s Project Runway winner, is having a moment. After graduating in 2016 from the Massachusetts College of Art and Design, she wasted no time. After leaving the MassArt campus, she went straight through the doors of the Project Runway workroom, where she would go on to make major waves and eventually win.

With her stunning, yet slightly bizarre, designs, Robertson navigates the uncharted territory between comedy and high fashion, “weaving an almost self-satirical skein of coded logic tailored to the female gaze,” she says. Her work is rich with playful imagery, drawing inspiration from everything from children’s toys to phallic fruit. It’s humorous (see: Titte Spinner Top, below), it’s bright, and it’s in a league all its own.

Robertson credits her time on Project Runway (to which she recently paid homage with her parodied version of the famed Mood Fabrics tote, dubbed the “Moody Tote”) for pushing her to refine her voice as a designer. Having developed a diverse portfolio as a student, she already had a fairly strong idea of her artistic identity. Still, she admits, she arrived at the show with a faint Who am I?! lingering overhead. Designers are, in her words, “sequestered” and allowed very little contact with the outside world during the competition. This immersive process, while understandably grueling, put her “in the zone,” and required her to think more critically.

One of the most valuable lessons from her run on the show has been the employment of unconventional materials in the design process. Those familiar with the reality show know all about the anxiously awaited, often panic-inducing point in the season when designers are challenged to create a look using something outside the realms of traditional textile.

For Robertson, this meant using things like guitar picks and dried mealworms (!!!) to craft “flowers” for some garments, and embellishing others with gumballs and feather boas—techniques she has since employed in her own collections. ”I just think it’s so much more interesting than, like, chiffon. A beautiful silk chiffon dress? I’ve seen it,” she says. Robertson also prefers the conceptual novelty that comes with exploring new media. “It’s just rethinking these materials that we see in one way, and being like, ‘Wait a second, you can actually put that on a dress, too!’ I love that shit.”

Robertson’s unorthodox process goes as far back as the conceptualization stage. Traditional sketching is decidedly not her thing—instead, she focuses on color pairings and textile manipulation to realize her visions. Those visions, as described on her website, “strive to marry to elegant and the obscene,” a theme woven through her entire body of work.

That dichotomy comes rather organically to Robertson; the offset nature of her work can be found in every facet of the design process, from the pieces themselves to the artist behind them. She particularly cites the way her very analytical, almost mathematical visions come to fruition in the form of whimsical colorways and glimmering patinas.

Speaking of a sequin-embellished 3-D-printed model of the Japanese pufferfish’s elaborate mating ritual mandala, Robertson relishes the foundation of logic disguised as nothing more than an aesthetic decision. “You would look at it and go, ‘Oh, my god, it’s pink and sparkly,’ but there’s this information behind it. I don’t just do it to do it—there’s something to learn.”

There’s a not-so-fine line between kitsch and luxury, and Robertson narrows the gap with each bold design choice. “There’s so much to be said with opposites,” she says. “I love that; it’s in everything that I do.”

For someone with such a unique vision, flying solo might seem like the obvious choice, but Robertson makes a convincing case for a power-in-numbers philosophy. Even for a strong solo artist, there’s something powerful to be gained from finding someone you work well with and playing off of each other’s strengths and weaknesses. “Collaboration is the future,” she predicts. “I don’t think working by yourself is the way to get things done.”

She speaks highly of one creative partner in particular: 2-D artist Jordan Piantedosi, with whom she has become close to over the course of their nearly five-year partnership. Together, the two creatives dreamt up the Protest Print line, an eight-piece collection donning Piantedosi’s handiwork, whose proceeds will go entirely to organizations such as Planned Parenthood, Black Lives Matter and Artists for Humanity, among others.

The idea to do something philanthropic came to them in the months following the 2016 election. “After Trump was elected president, we both were feeling pretty lost. As an artist, it’s hard to know what to do, because everything you live for can just seem really pointless,” Robertson admits. In an attempt to depart from the all-too-common “armchair activism,” the pair combined their talents to create something that could actually make a tangible impact on groups being affected by the current administration.

They created tote bags and scarves, plus a striking, one-of-a-kind couture piece: the Heroic Coat, priced at a cool $7,000. “I can’t announce who I sold it to yet, but it’ll be out soon,” she teases. “It’s a local museum, I’ll tell you that much.” The collection ultimately raised an impressive $11,000 to be distributed among the chosen organizations.

These innovators are “hungry for artists to work with,” which explains how Robertson found herself in dialogue with researchers at the Massachusetts Institute of Technology. She was first introduced to the institution through a class she took while she was a student at MassArt. She was so inspired that she later contacted Jifei Ou from the MIT media lab to learn more about sustainable alternatives to common textiles. Ou has developed technology allowing him to 3-D print “fur,” and at a time when big names are bowing to environmentalist pressure, it’s not difficult to picture this technology soon walking at NYFW.

Fashion’s environmental impact is not the only thing that needs to change. Robertson feels passionate about social responsibility as a designer. Citing the 2015 documentary The True Cost, she takes issue with fast fashion and the way it exploits workers. Independent designers, she says, are unable to make ready-to-wear, as they can’t compete with the low costs that cheap labor makes way for. However, she feels that convenient, cheap clothes are not worth the steep cost of human livelihood.

There’s also the issue of encouraged consumerism, as individuals are convinced of what they “need” to possess. Robertson admits she falls victim to this consumer culture herself. “It’s something I’m trying to unlearn, because I don’t want to live like that, but I’m also like, ‘Ugh, I need the hottest stuff—ruffles all day.’”

The flow of impact in this sphere, Robertson feels, is bottom-up, as cultural changes in real communities now are the ones inspiring fashion houses. Be it consumer markets or independent designers, large enough groups are beginning to hold industry leaders accountable, spurring revolution and ultimately ousting archaic norms.

The designer-turned-activist has made impressive strides in an exceptionally short amount of time, and if her beginnings are anything to go by, the future is bright for Erin Robertson. Though her multifaceted approach to fashion draws from numerous sources, her greatest skill is tying these aspects together in a surprisingly cohesive way.

As for what’s next? With her recently acquired residency at Boston’s AutoDesk BUILD Space, she plans to take her love of irregular materials one step farther in collaboration with members of the architectural community, manipulating building materials like gypsum into her garments. As with much of Robertson’s work, we can’t predict it’s final form, but we know we can count on something gutsy and radical, with a major point to be made.