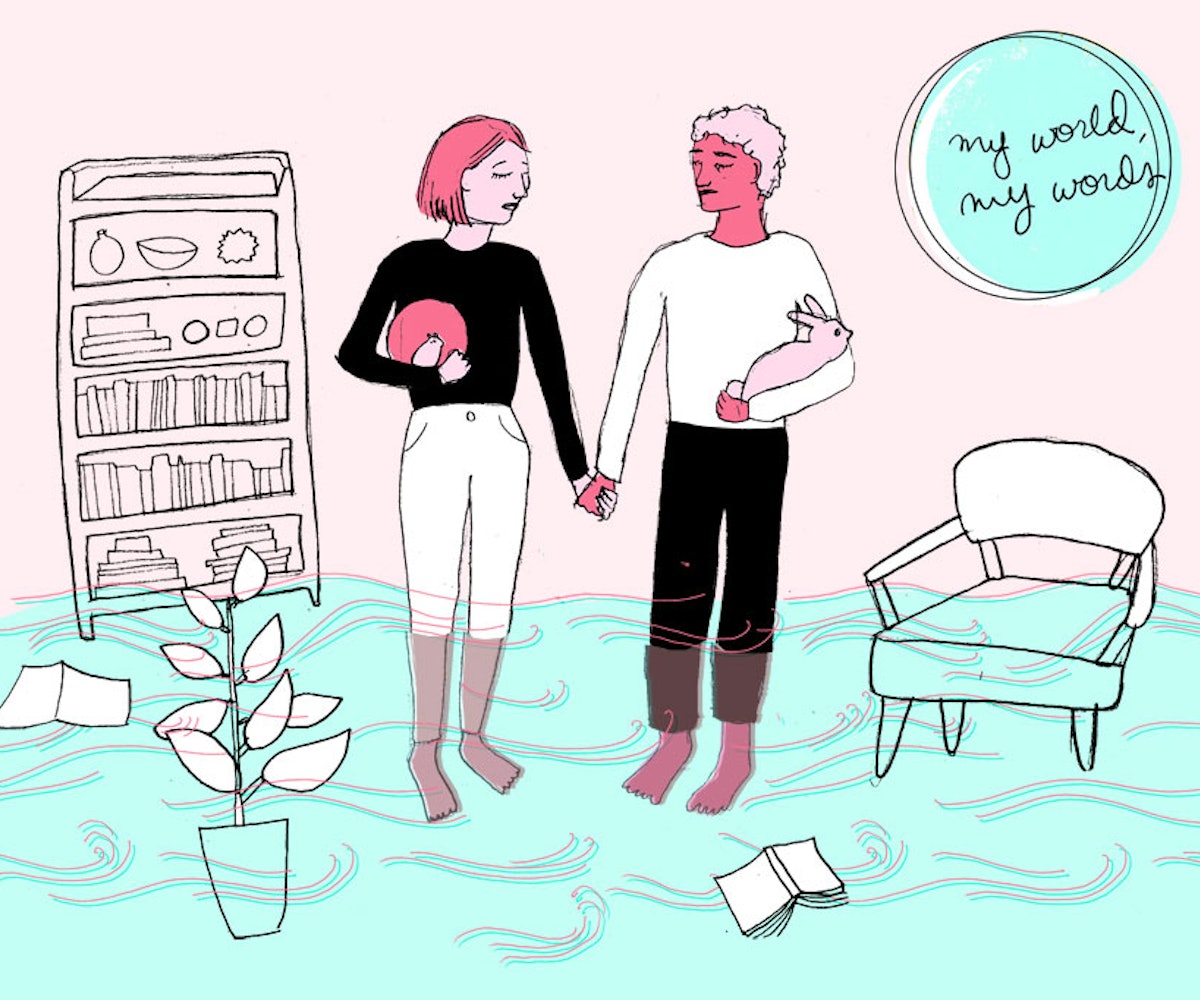 I have a thing about water. Every time I hear dripping water or heavy rain, the hairs on the back of my neck stand up a bit. Hurricane Sandy destroyed the first home my partner and I shared, so I guess it’s an understandable after-effect.

Nick and I had put off living together for years, knowing the strain domesticity could create. We had no idea what was in store for us.

Before we moved into our garden apartment, Nick told me he didn’t really like the idea of renting something that was street-level. With Nick not really being an overly cautious person, this should have tipped me off. It didn’t.

It took nine handy men, two plumbers, three guys from Roto-Rooter, and a contractor to fix our toilet the first time. Two months later, when the problem returned, they sent a camera down the back of the pipes. They then discovered that our bathroom line did not connect to the front sewer line, meaning sewage was just being spewed freely beneath our floor. Two very nice men from Peru spent two days living in the foundation of our home, connecting sewer lines.

So on the night of Hurricane Sandy, when we heard that same bubbling we were so used to from our toilet clogging, at first I thought the sewer was just backing up again.

As usual, Nick began to put a towel under the toilet bowl to catch some of the water that was leaking out. As I stood in the adjoining, carpeted room, I looked down. The perimeter of the carpet began to darken. Water was coming up from the floor.

When I looked up from the darkening floor, I saw a river gushing in from our deck, through the living room, and out the front door. Our backyard had filled with water, which burst through our steel back door. I felt like I was in a dream. As I screamed for Nick, the room quickly began to fill. “This is not going to get better,” I thought, water around my ankles.

We heard a knock on our front window. We looked out to see that our neighbors had rushed down to help us move out what we could.

Ankle deep, I ran around, trying to get our pets to safety. I pulled out plugs and grabbed electronics, and I didn’t leave until the water was up to my belly button.

As the water rushed past my waist, I grabbed one final item, a spare pair of jeans, and took a last look back into my apartment before getting pulled out of my front window.

At that time, Nick and I owned a rabbit and a hamster. Liza was my first hamster, and my housewarming gift to Nick.  Once we got her, I fell instantly in love. She truly embodied her namesake, the great Liza Minnelli, and would spend hours in her plastic hamster ball, fearlessly rolling herself into doors and crashing into walls. Liza would follow my rabbit around the apartment and try to nip at him through the holes in her plastic ball. They had a real big brother/little sister dynamic. Bunny pretended she didn’t exist and Liza did everything in her power to get his attention. Two months into our lease, when Christmas came, we bought Bunny and Liza tiny Christmas stockings that hung on our fireplace, side by side.

Our top floor neighbors helped us bring the things we valued most to safety. They are the reason both of our pets made it out alive and with supplies. They offered us clothes, food, and a safe place to spend the night. And we had not spoken more than a “hello” before that night.

Moments after we abandoned the apartment, after the water had gotten well past my waist and all the overheard lights in my apartment finally went out, we stood in the hallway of our apartment building, soaked and surrounded by the few things we were able to save.  I took a deep breath in.

We spent that night trapped in our apartment building. Our street was waterlogged. We had nowhere to go. We spent the next few hours on our front steps watching sea water fill our neighborhood. We watched power lines fall, conductors explode, and cars float into each other. I saw a woman crying as people pulled her out of her home.

That night we slept two floors up, with the windows open. As I tried to fall asleep, I listened to the wind and what sounded like the ocean attempting to lull me to sleep. I soon realized that sound was actually several feet of water rolling on top of the pavement below. It did little to relax me.

I woke up early the next morning. The sun was shining. The water was gone from the street. We ventured down into our apartment and discovered it was dry. All that remained from the previous night was debris and a water mark, exactly four feet high.

We spent the next week sorting, cataloguing, and discarding our belongings with help from friends and neighbors. It’s a surreal feeling, sawing the first piece of furniture you ever purchased in half so you can fit it, water logged and heavy, out your front door. It helped to have people around. For the next week, volunteers from all over Jersey City stopped by to offer us food, blankets, flashlights, and help hauling everything we once owned into city-provided dumpsters. My faith in humanity went up significantly.

Once our apartment was gutted, we turned in our keys. After spending a year fighting to fix this beautiful falling down apartment, it was time to move on. I left my curtains up in the front windows as a tribute to what had once been a lovely home. And then I walked away.

One of my favorite memories is from the night of the flood. Nick and I snuck away from our neighbors’ apartment before going to bed and stood on the front steps of our building. It was very late at night and we held hands, looking out at the water below. I knew then, without question, that this was the person I’d have for the rest of my life.

Nick and I now live on the third floor of a wonderfully maintained apartment building. We fucking hate the rain.

NEXT UP
Culture
On The List (With Melissa Rich): How To Throw The Ultimate Apartment Party
Culture
Succession Season 4 Trailer Explodes With Family Drama
Culture
Kareem Rahma Survives A Dinner Party From Hell In “Really Rich Parents” Video
Entertainment
Emma Chamberlain Is Officially Moving to Spotify On February 23 (Exclusive)
Style + Culture, delivered straight to your inbox.