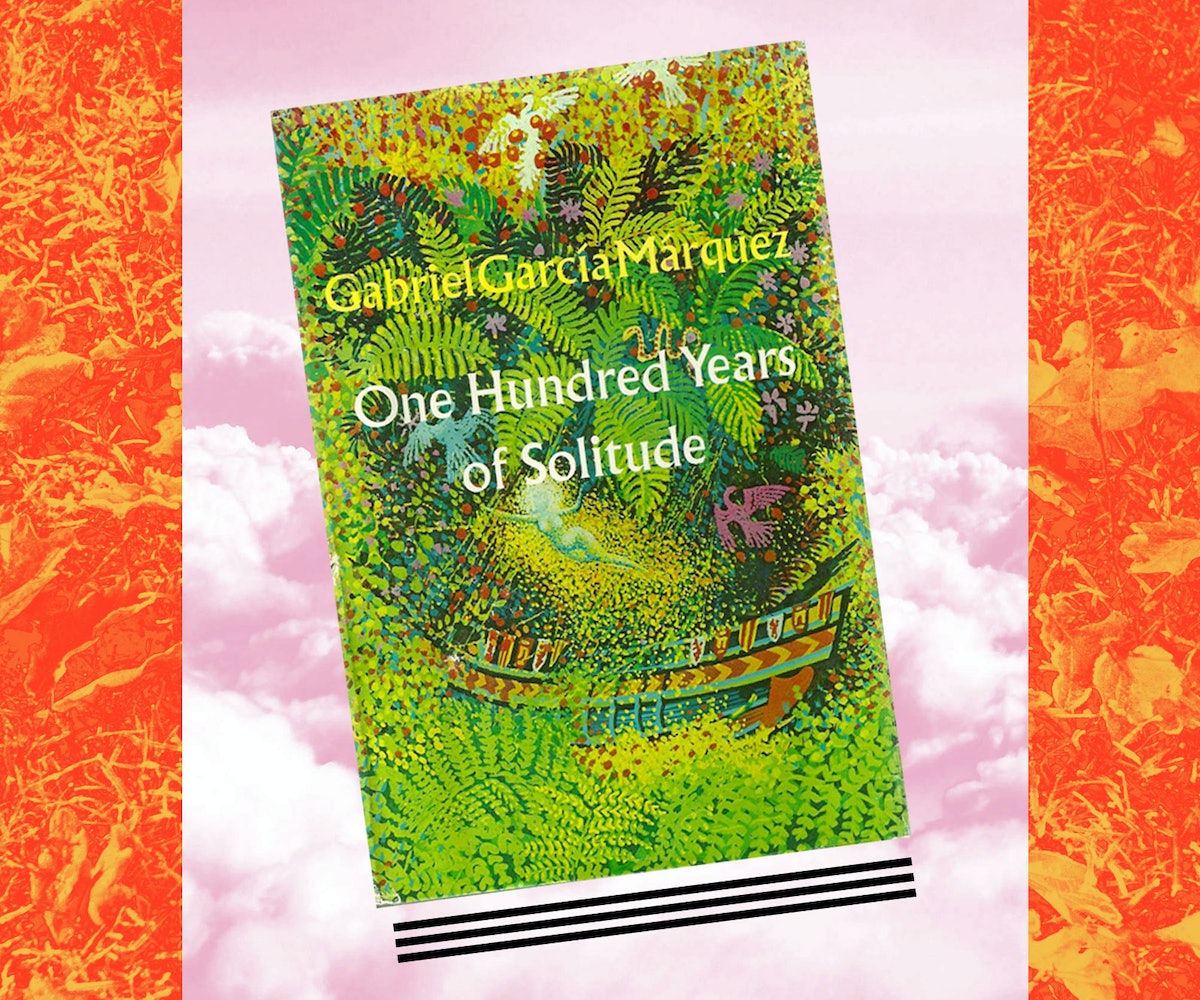 Over the course of beloved television series Gilmore Girls, one thing became crystal clear: Rory Gilmore really loves to read. While viewers didn't need to be particularly perceptive to pick up on this personality trait, it did take a certain kind of viewer, one with an obsessive attention to detail, to compile the official Gilmore Girls reading list that's been floating around the internet for the last several years. Specifically, it took Australian writer Patrick Lenton to come up with the 337 books that Rory could be seen with during the series' seven season run. Lenton published the full list on his website, and has been diligently slogging through it as part of the Rory Gilmore Reading List Challenge. (He is now up to 52.)

While we commend Lenton's tenacious and completist approach to said challenge, we think there's another way to do this, a way which doesn't involve reading all 337 books, but which will still make you feel more connected than ever before to all things Gilmore. Because, really, isn't that the point of a Gilmore Girls reading list? To make the intrepid reader feel like they're in Stars Hollow, drinking coffee at Luke's Diner, and listening in on conversations happening at rapid-fire speed? Of course it is. And how are you going to do that if you're spending all your time reading 337 books? Simply put: You won't. Rather, you'll feel overextended and world- (or at least word-) weary, and won't have the energy to even get enthused for the upcoming Gilmore Girls revival. And wouldn't that be a shame?

Rather, before you reimmerse yourself in the world of Stars Hollow, take some time doing what Rory, as per her high school valedictory speech, would do, and spend some time in "a world of books," where you too can feel like you've become "a resident of Faulkner’s Yoknapatawpha County, hunted the white whale aboard the Pequod, fought alongside Napoleon, sailed a raft with Huck and Jim, committed absurdities with Ignatius J. Reilly, rode a sad train with Anna Karenina, and strolled down Swann’s Way.”

These are the books Rory alluded to during her graduation speech, so clearly they meant a great deal to her and her development into the fast-talking bookworm she grew to be. So what better place to start than with these nine books? Nowhere. If you only read some of the 339 books that Rory did, read these. They're classics, all of them, so you'll learn something about the world that is, the one that was, and, of course, a little something about yourself along the way.

1) As I Lay Dying by William Faulkner

3) The Sound and the Fury by William Faulkner

5) War and Peace by Leo Tolstoy

7) A Confederacy of Dunces by John Kennedy Toole

Rory Gilmore read a lot of super-sophisticated books for a high school student. Or, for anyone, really. So maybe you just want to tackle some of her Young Adult choices instead of diving straight into Proust? Perhaps! We don't blame you. And, besides, her YA selections are all really great and worth reading no matter your age.

10) The Diary of a Young Girl by Anne Frank

15) The Bell Jar by Sylvia Plath

16) Emily the Strange by Rob Reger

17) The Perks of Being a Wallflower by Stephen Chbosky

19) A Tree Grows in Brooklyn by Betty Smith

20) The Virgin Suicides by Jeffrey Eugenides

22) The Crucible by Arthur Miller

23) To Kill a Mockingbird by Harper Lee

25) Flowers for Algernon by Daniel Keyes

Far be it from us to say that any book is trashy (we fully believe some books suck, but that has nothing to do with any elitist standards), but some of the the books on Rory's reading list are a little more... refined than others. Here, though, is a celebration of the most compulsively readable tomes that Rory toted all around Stars Hollow.

26) Valley of the Dolls by Jacqueline Susann

28) R Is for Ricochet by Sue Grafton

29) The Shining by Stephen King

30) The Dirt: Confessions of the World’s Most Notorious Rock Band by Tommy Lee, Vince Neil, Mick Mars and Nikki Sixx

33) Fear and Loathing in Las Vegas by Hunter S. Thompson

34) The Nanny Diaries by Emma McLaughlin

Not Lost in Translation

Rory's reading list spans genres and time periods, and the authors on it offer a variety of voices from all over the world. Here are some of the books which share the stories of authors from across the globe.

37) The Name of the Rose by Umberto Eco

38) Reading Lolita in Tehran: A Memoir in Books by Azar Nafisi

41) Crime and Punishment by Fyodor Dostoevsky

42) The Shadow of the Wind by Carlos Ruiz Zafon

43) One Hundred Years of Solitude by Gabriel Garcia Marquez

45) The Kite Runner by Khaled Hosseini

46) The House of the Spirits by Isabel Allende

47) Out of Africa by Isac Dinesen

48) The Hunchback of Notre Dame by Victor Hugo

50) The Trial by Franz Kafka

51) Sense and Sensibility by Jane Austen

52) The Master and Margarita by Mikhail Bulgakov

Fact Is Stranger Than Fiction

Rory might lean more heavily toward fiction than non-, but here are some of the best true-to-life tales on her list. Some of these are more investigatory, true crime-type tomes, and others are elegant and reflective memoirs. All are brilliant and well worth a read.

53) The Year of Magical Thinking by Joan Didion

54) Nickel and Dimed by Barbara Ehrenreich

56) Bitch in Praise of Difficult Women by Elizabeth Wurtzel

57) The Devil in the White City: Murder, Magic, and Madness at the Fair that Changed America by Erik Larson

59) Me Talk Pretty One Day by David Sedaris

61) Kitchen Confidential: Adventures in the Culinary Underbelly by Anthony Bourdain

62) Secrets of the Flesh: A Life of Colette by Judith Thurman

65) Stiff: The Curious Lives of Human Cadavers by Mary Roach

66) I’m With the Band by Pamela des Barres

69) In Cold Blood by Truman Capote

70) Autobiography of a Face by Lucy Grealy

The Best of the Rest

Simply put, these books defy easy categorization, but they all ought to be read for no more reason other than that they're provocative, fulfilling works of art, and isn't that reason enough? Yes. Yes, it is.

71) The Amazing Adventures of Kavalier & Clay by Michael Chabon

76) Oryx and Crake by Margaret Atwood

78) Tender Is The Night by F. Scott Fitzgerald

80) The Complete Poems by Anne Sexton

82) The God of Small Things by Arundhati Roy

84) The Namesake by Jhumpa Lahiri

NEXT UP
Nylon Nights
Post NYFW, Chanel Gathers All the Girls for Annual 'Through Her Lens' Lunch
Entertainment
The 2023 Met Gala Theme Is Karl Lagerfeld: A Line In Beauty
Entertainment
Lana Del Rey's Best Collaborations
Beauty
Olivia Cooke’s Beauty Evolution, From Indie Ingenue to ‘House Of The Dragon’ Queen