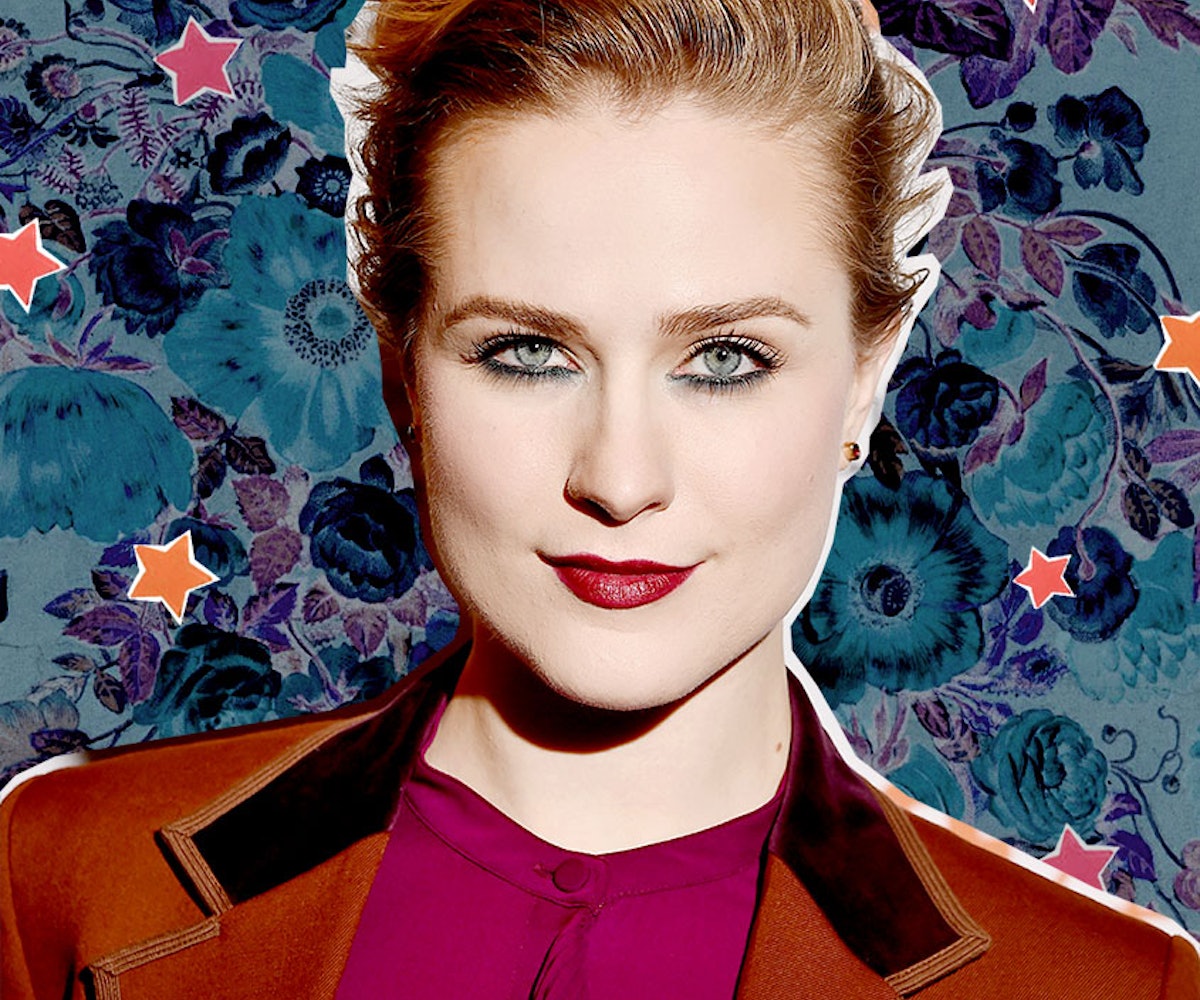 Evan Rachel Wood came out as bisexual in 2011. Since then, she's used her fame to amplify a message that aims to bust the offensive and often harmful misconceptions that many people have about bisexuality.

Wood recently fired off a series of Tweets on the subject, saying, "The reality is that bisexual people face discrimination not only outside of our community, but also from within. And that can discourage them from engaging in and benefiting from the work that LGBT advocates are doing to address our mental, physical, and sexual health.”

Inspired by her words, we reached out to Wood and asked for more. This is what she has to say.

How did you or are you working to overcome the bi-shame?

Years of trying to fit into a box I didn't belong in. I realized I was happier when I just accepted myself. I stopped feeling like I had to prove my "queerness." I knew who I was and that was enough. Also just noting that some people view the word queer as offensive. Some embrace it and identify with it. I always liked the word when it wasn't being used in a derogatory way. So to be clear, I am using it in a non-derogatory sense.

There seems to be confusion over “experimentation” and actual bisexuality. Can you speak to that more?

I think you answer your own question. Experimentation is just that. Trying something out because you are curious. Sometimes it works sometimes it doesn’t. I can only speak from my own experience and I wasn’t doing it for attention or because I was curious. It was like a fire in my soul that I had to let out or I would never be complete.

What’s the difference between pansexuality and bisexuality?

People's definitions vary. So again, speaking only from where I stand, when I say "bisexual" I mean that I can be sexual or have a long-term relationship with a male or female. Of course, everyone has their types but at the end of the day, it's a person's personality that I find the most attractive.

What do you have to say to individuals who consider bisexuality greedy?

I'll answer that with a rhetorical question: Why is it not considered greedy to limit and hoard your love or attraction to just one type of person?

How do we all work to be better allies?

Try not to judge someone before you really know their story. Be good to people who are good to you. And don’t let bad experiences with certain people taint your perception of an entire group of people. That’s how extreme points of view take over and bigotry is born.

Why do you think many people still view bisexuality as, forgive the SATC reference, the “layover to Gaytown?”

Because for some, it is a gateway. Some people go through more of a transition, for whatever reason they feel. But just because you once identified as bisexual and now you identify as gay, doesn't mean every bisexual is just "afraid to come all the way out.” Your experience is your experience. Period. I have a feminine side and a masculine side. I think I finally found a good marriage between the two. They have made peace with each other. When I am with a man, I am not straight. When I am with a woman, I am not gay. I am always bi. I am always me. I can’t "pick a side" or "shut one down."

One is not better than the other. They are just different. The only choice I make is the choice to be happy by letting go and just being myself.

NEXT UP
Culture
Not One, But Two BTS Documentaries Are Coming
The Art Issue 2022
From Renaissance To Gemini Rights: The Stories Behind 2022's Best Album Covers
Culture
NYLON Party Report Card: Partying With The Stars & 94 Foot Long Whale At The Natural History Museum Gala
Culture
10 Luxurious Gifts For Your Bougiest Friend