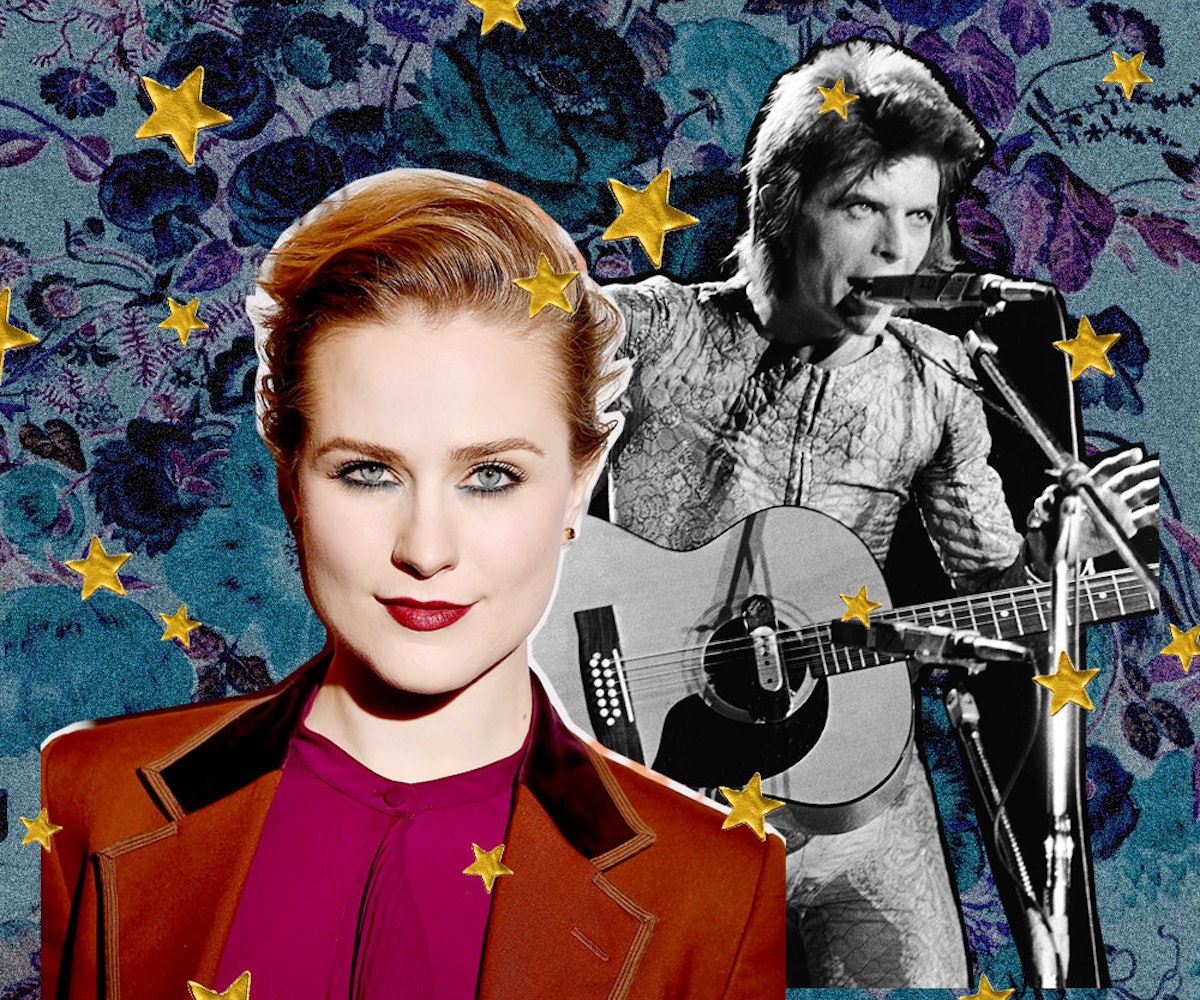 “The day we lose Bowie will be one of the saddest days of my life.” A sentence I’ve uttered to myself on numerous occasions.

I knew that no other artist had as much of an influence on my life and my very identity than David Bowie.

I was not, however, at all prepared for this day to come so soon.

I was sure I’d have a warm up. I could ease into this type of loss.

Needless to say, it’s come as quite a shock.

I feel like a kid who was riding a bike with someone holding onto the back. Every now and then I’d look over my shoulder and see my safety net, so I would continue to look forward and keep pedaling.

This time I looked back and they had just let go. Without warning. And I was alone.

My introduction to Bowie was a lot like most girls my age. When I was about four years old I watched a movie called Labyrinth directed by Jim Henson, starring baby Jennifer Connelly and my hero David Bowie.

A white owl flapped wildly at a window until it blew open and a shadowy figure came creeping in.

I saw him. Standing there with the wind blowing in his cape and long choppy hair. He was genderless and beautiful. Terrifying and sexy. I had never seen anything like him in my life.

I fell in love instantly.

After that, I went to the video store every other week to rent the movie. This was before iTunes or DVDs and you couldn’t find a copy anywhere. It was out of print, so I’d watch it on repeat until I would be forced to bring it back.

I memorized all the songs and sang them constantly. I couldn’t get enough.

A child at the time, I was auditioning a lot and before I would go in to read my mother would pull me aside and whisper, “You remind me of the babe…”  which would prompt me to continue the rhyme until we finished it together. It was my good luck charm. Every time we did it, I got the part. Like magic.

My obsession with the film and the haunting Goblin King continued, so one day when I was returning the video yet again and feeling sad, my mother took me next door to Warehouse Music.

I was scanning the aisles when I saw Bowie’s face. I got this rush of excitement and couldn't believe there was more content to devour! I didn’t know who he was outside of the film. I was nine years old. I had no idea the journey he was about to take me on.

I bought a Best of Bowie tape with all of his biggest hits, from Rebel Rebel to Ziggy Stardust to Let’s Dance. “Ashes to Ashes” was the first song that ever moved me to tears and I would blast “Space Oddity” as loud as it would go while I danced and twirled scarves over my head. It was the first time music was more than just entertainment. It was transcendent.

I worked through his albums over the years. Rise and Fall, Low, Earthling, Heathen, Changes, and a personal favorite of mine, Hunky Dory.

I watched all the footage I could get my hands on, read every book, saw every movie. (Don’t even get me started on The Hunger or The Man Who Fell to Earth). I used to get a new Bowie shirt on my birthday every year and all my playlists or love notes to or from a lover for the rest of my life would have a piece of Bowie in it. I talked everyone’s ear off about him and his mountain of art. If you knew me at all you knew there was nothing else in the world I loved more. It's always been the way to my heart.

I actually made a promise to myself as a little girl that I wouldn’t marry anyone unless they sang me “As the World Falls Down” first—the song Bowie serenaded Jennifer Connelly’s character with in that infamous ballroom scene where he put his hand on her waist and they waltzed around a glass bubble. All I wanted as a young girl was that hand on my waist.

I didn’t stick to this promise as an adult and ended up divorced. Go figure. But I digress.

Gender norms were never my cup of tea. I always struggled with not relating to the other girls and I searched for my place in this crazy world.

I was a bisexual tomboy from Raleigh, North Carolina who became very famous at a young age and for most of my life felt very isolated and alone; unable to relate to any “normal” kid my age.

I did what I did for art, not fame. Fame was never what I strived for or even thought possible.

It was a real shock to the system when it happened. I was uncomfortable in my own skin and struggled with bouts of depression.

I didn’t grow up in a super-religious household. Religion was more about tradition than a spiritual practice, but I didn’t mind at all. My religion was art. Most importantly music. And Bowie was my god.

I don’t like to idol worship. I have become a bit jaded over the years having been in the business so long. The starry eyes and the magic that burned so bright when you were young start to naturally fade over time as you become part of pop culture instead of looking at it from the outside.

You see the man behind the curtain and the great and powerful Oz is less exciting. I started to lose faith in all the things I held so dear. It was hard to see the good side of what I did when all I saw was the dark.

In some of my darkest hours as a young adult in my early 20s, battling mania, hallucinations of my own demons, and utter delusion; he was there.

When I could feel I was losing my grip on reality, when I was terrified of myself and what the future held, when I thought of putting all of it to an end, I would lock myself in a bathroom and play “Rock n Roll Suicide.” I would grip something while I waited for Bowie to scream “You’re not alone!” and I would hold on for one more night.

Bowie is in everything I do. He introduced me to androgyny, surrealism, glam, poetry, fashion, sex—and rock 'n’ roll, for god’s sake.

Bowie created a domino effect in my life. I am still reeling from it.

He has been ever-present; the only constant I clung to. He taught me that being weird actually made me beautiful. He made me feel like as long as he was around I had a place. I even tattooed the Aladdin Sane lightning bolt on my thigh at the age of 19.

When I was 15 years old it happened. David Bowie dropped his album Reality and my time had finally come to see him in concert.

I wasn’t getting my hopes up about him playing older songs because I knew artists hated doing that. Still, I was over the moon excited.

But he played everything. New and old. He opened with “Rebel Rebel,” closed with “Ziggy Stardust,” and he even played “Ashes to Ashes” (which still moves me to tears).

After the show I went backstage and there he was. What always struck me about him was his unshakeable grace and humility. He was so kind to everyone even though he must have been exhausted from playing a show. He had an energy and a light that didn't surprise me, but it did make me black out for a second.

He took the time to speak to me and my boyfriend, two scraggly geeky teenagers who couldn’t put a verb behind a noun. I shook his hand and said something along the lines of “It’s very, very nice to meet you, that was so amazing.” Then he was gone.

Before I left we managed to take a picture and I felt Bowie put his hand on my waist, just like Jennifer Connelly. My dream had finally come true.

When I awoke to the news this week I had about 10 messages that said, “You were the first person I thought of.”

I curled up in a ball, put on Five Years and wept for hours 'til I fell asleep. It was like losing a guardian angel.

The death of Bowie means the death of many things. For me it’s a mark of time and the end of an era. It’s when I am really grown up and the torch is being passed to all of us now.

Today, I’m almost 30 and have a two-year-old son. I am teaching him about music. I can pass on the legacy.

It’s our job to keep the dream alive.

Sing the songs. Live the dream.