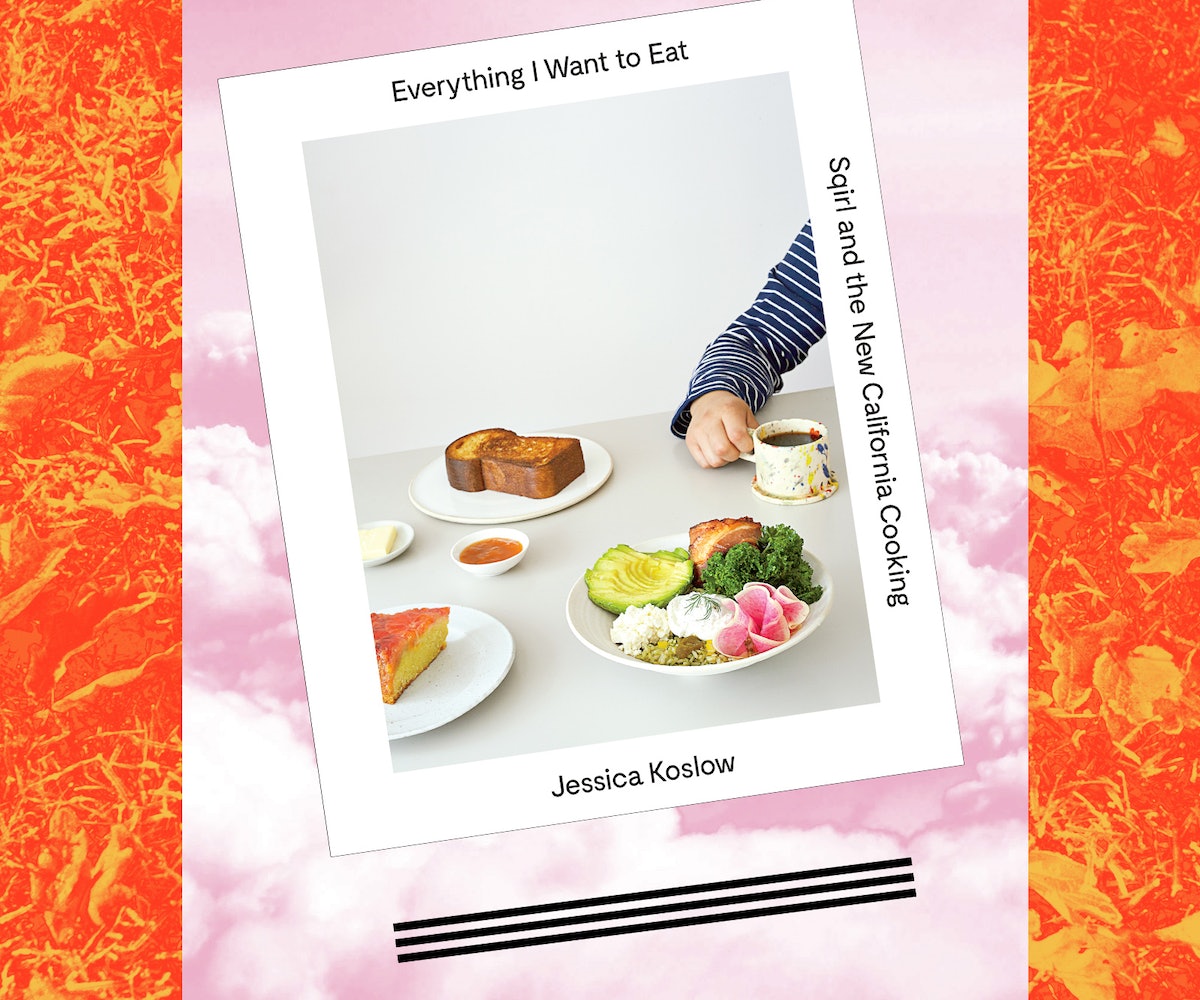 At NYLON, we take food as seriously as our books, with the need to find the perfect way to express ourselves in a literary sense sometimes placed on the same level of importance as finding a dish fitting to the exact moment in time that we're experiencing. You can imagine, then, what happens to us when the two come together, resulting in narratives of delicious proportions that fuel our reading experiences and light up and arouse all five of our senses with smells of fragrant spices, sounds of sizzling meats, heat of a fire, and a visual burst of colors and textures that accompany each finger-licking dish.

For the many appetites out there, this season saw a slew of food connoisseurs putting their craft on paper and inviting readers to dine at their tables. Whether it's a debut cookbook from a famed chef, a follow-up to one of the country's most beloved food memoirs, or a look into the history of gastronomy in America, these titles have managed to feed our imagination and tantalize our palettes.

Ahead, the 14 books every food lover should read this fall. If you haven't had breakfast yet, we advise you do before proceeding.

Joe Isidori has finally solved the lines-around-the-block problem surrounding his cultishly-adored burger and milkshakes joint, Black Tap, with the release of his debut cookbook. Featuring 40 restaurant-approved recipes for mouthwatering burgers and the gravity-defying milkshakes that have placed Isidori in the upper echelons of his craft, the book allows readers to get the same dining experience at home as they would at either of the two Black Tap locations. Now if only we could uncover the magic that goes into the Bagel Burger, all our goth dreams would come true. Your move, Black Tap.

Appetites: A Cookbook by Anthony Bourdain with Laurie Woolever

After first giving us an inside look at the fast-paced, alcohol-filled, foul-mouthed, whirlwind scene of restaurant life in Kitchen Confidential, Anthony Bourdain is back after a 10-year literary absence. Unapologetic and audacious as ever (his meat chapter starts with a "big fucking steak"), the self-described "monster of self-regard" shares recipes inspired by childhood memories, foods eaten during happier moments of his life, and his greatest hits. Highlighting dishes that Bourdain likes to feed his family and friends with, Appetites is a tribute to his beloved daughter, who he had at 50 years old, created in a "desire to make up for lost time." "There is nothing remotely innovative about the recipes in this book. If you are looking for a culinary genius to take you to the Promised Land of next-level creativity, look elsewhere," reads the intro. We'll respectfully disagree.

Knives & Ink: Chefs and the Stories Behind Their Tattoos (with Recipes) by Isaac Fitzgerald, illustrated by Wendy McNaughton

Less about recipes and more about the tattoos that have become synonymous with being a chef, Knives & Ink gives a gorgeously illustrated look at some of the standout body art brought to you by 60 kitchen pros of all culinary calibers. With accompanying stories, memories, and even tributes as colorful as the ink itself, some of the most noteworthy chefs are placed in the center of our plates for delightful consumption. The collection of recipes included from some of the best kitchens around is just the (literal) cherry on top.

If vegetarian cuisine has never been your go-to choice, prepare to be converted by these authors, who just also happen to be the chefs behind uber-popular Philadelphia restaurants Vedge and V Street. Featuring more than 100 vegetarian and vegan dishes straight off of the beloved menus (but adapted for the at-home cooks), expect the recipes, categorized by snacks, small and large plates, desserts, and cocktails, to truly deliver on their promise to turn even the most passionate carnivores into plant-loving fans.

French Country Cooking: Meals & Moments from a Village in the Vineyards by Mimi Thorisson

As a city girl through and through, I have never had any dreams of living in the countryside. That is, until I chanced upon Manger, the blog of Mimi Thorisson, a few years ago. Devoted to the art of French gastronomy and her rural life in a chateau in the Medoc region of France, this Francophile shares her culinary magic in an atypically (at least for the French) accessible manner. We dare you not to fall in love with her life, made more colorful by her brood (consisting of the most photogenic children there ever were and a band of fox terriers), exquisite recipes, and the charm of the untouched country.

Everything I Want To Eat: Sqirl And The New California Cooking by Jessica Koslow with Maria Zizka

Part of the food revolution that has put the farm-to-table movement at the forefront of L.A.'s culinary scene, Jessica Koslow's restaurant, Squirl, set the new standards for health-conscious cuisine that doesn't lack the slightest in profile or Instagram worthiness. Soulful, yet easily adaptable to dietary modifications (a must in California), the ingredient-driven recipes range from simple "eggs of all kinds" to more complex, flavor-layered concoctions like baccala flower pot and rabbit ballotine. After flipping through the pages of drool-inducing recipes, we agree with Koslow wholeheartedly: It is everything we want to eat.

If you loved My Life in France, Julia Child's best-selling memoir about her culinary beginnings in the food's capital, you're going to want to read this follow-up about what happened when "America's First Lady of French Food" set her sights on the, at the time, expanding medium of television. Written by Child's grandnephew, who also co-wrote My Life in France, the book recounts the culinary icon's life after she brought her talents back to the U.S. and embarked on her second act to take over kitchens in every American household. While examining her life and relationships with her husband, editor, and talents that she mentored (Jacques Pepin and Emeril Lagasse among them) and detailing the challenges that she had with notoriety, the book highlights flavors and philosophies that fueled her style of cooking, the legacy of which would go on to change and shape the way we eat today.

Dinner at the Long Table by Andrew Tarlow and Anna Dunn

From the restaurateur who has made Brooklyn, New York, into a culinary hotspot of flavors, comes a rousing debut cookbook divided by 17 menu ideas meant to be celebrated quite literally. Brimming with recipes that are designed for special occasions as well as the change of seasons and even weekend feasts, Dinner at the Long Table bursts with an invitation to participate in the joy of sharing food and finding delight in the smallest (summer farewell) and biggest (wedding anniversary) of life's events. Warning: The literary spirit is so contagious, you will find yourself unable to stop drooling over recipe after recipe until you get to the very last page.

Poole's: Recipes and Stories from a Modern Diner by Ashley Christensen with Kaitlyn Goalen

Truer words could not have been said: "Diners are an American fixture... As one of the most accessible forms of restaurants, diners are places where strangers can find familiarity through food." But don't let accessible, said in the introduction of Poole's, translate to basic. Owner of seven restaurants based in Raleigh, North Carolina, Ashley Christensen has built a name for herself in cuisine that's as soul-feeding and familiar as it is innovative and experimental. A love letter to the diner institution, you can't help but feel comforted by Christensen and the dishes featured.

The Artists' and Writers' Cookbook: A Collection of Stories with Recipes edited by Natalie Eve Garrett, illustrated by Amy Jean Porter

As the name suggests, this book is a collection of personal, food-related stories with recipes from artists and writers. Anthony Doerr, James Franco, Marina Abramović, and others divulge their favorite foodie fantasies and memories in this delightfully illustrated culinary anthology that was inspired by the 1961 cookbook of the same name, which included recipes from the likes of Marcel Duchamp and Harper Lee. This is no mere cookbook, though, with narratives as delightful to your literary palette as the recipes are to your culinary one.

Mozza at Home: More than 150 Crowd-Pleasing Recipes by Nancy Silverton with Carolyn Carreno

From the owner of six successful restaurants comes this collection of family-style recipes perfect for entertaining and made for hosts who love feeding a crowd. Inspired by a recuperative trip to Italy and sectioned by main dishes, with a list of side dishes and condiments to serve with them, Mozza at Home helps rediscover the joy of cooking and eating at home in the age where restaurants of one fame or another are popping up faster than the chef's line moves. Readers will be rewarded with a selection of recipes, from soulful to seasonally innovative, and encouraged to mix and match, as all the flavors and textures of the dishes complement one another—not an easy feat for a book with more than 150 recipes.

Food52 A New Way to Dinner: A Playbook of Recipes and Strategies for the Week Ahead by Amanda Hesser and Merrill Stubbs

Made for those who dread cooking on weeknights, this book, from the founders of the popular online kitchen and home company of the same name, takes the planning of inspiring dinners and brown-bag lunches out. You will forget all about GrubHub as soon as you delve into this photo-driven book that divides the chapters by base dishes, to be made over the weekend, with a foolproof formula of how to stretch them over the week in a variety of innovative ways. With grocery lists and timelines accompanying each week, cooking ahead has never been easier or more delicious.

Recipe to try: chicken cutlets with chermoula and preserved lemon

It's been a while since we seen historical precision so masterfully combined with a food narrative. A food historian, Paul Freedman dives into the history of stateside restaurants in the last two centuries whose heritage contributed to the way the food industry operates today. By looking at the wider story of race, class, gender, and immigration through the lens of establishments like Delmonico's, Sylvia's, Mamma Leone’s, Le Pavillon, and The Mandarin, Freedman explores the way the nation's palette and, more importantly, views, have come to evolve. You will love the delectable aftertaste left in your mind after you are done with this educational, but also highly entertaining, read.

The Monet Cookbook: Recipes from Giverny by Florence Gentner

If the title doesn't give it away, this food volume is a work of art in itself. Inspired by the impressionist masterpieces of Claude Monet and the dishes prepared in his Giverny, France, kitchen, this part coffee table book, part cookbook features 80 recipes as vibrant and full of life as the paintings that Monet used to paint. A fitting tribute to the food connoisseur, who was brought up on the finer foods of Normandy, The Monet Cookbook is additionally filled with reproductions of the artist’s work and photographs. Attempt to recreate, and watch the flavorful dishes come to life as if they were from one of Monet's mouthwatering stills.