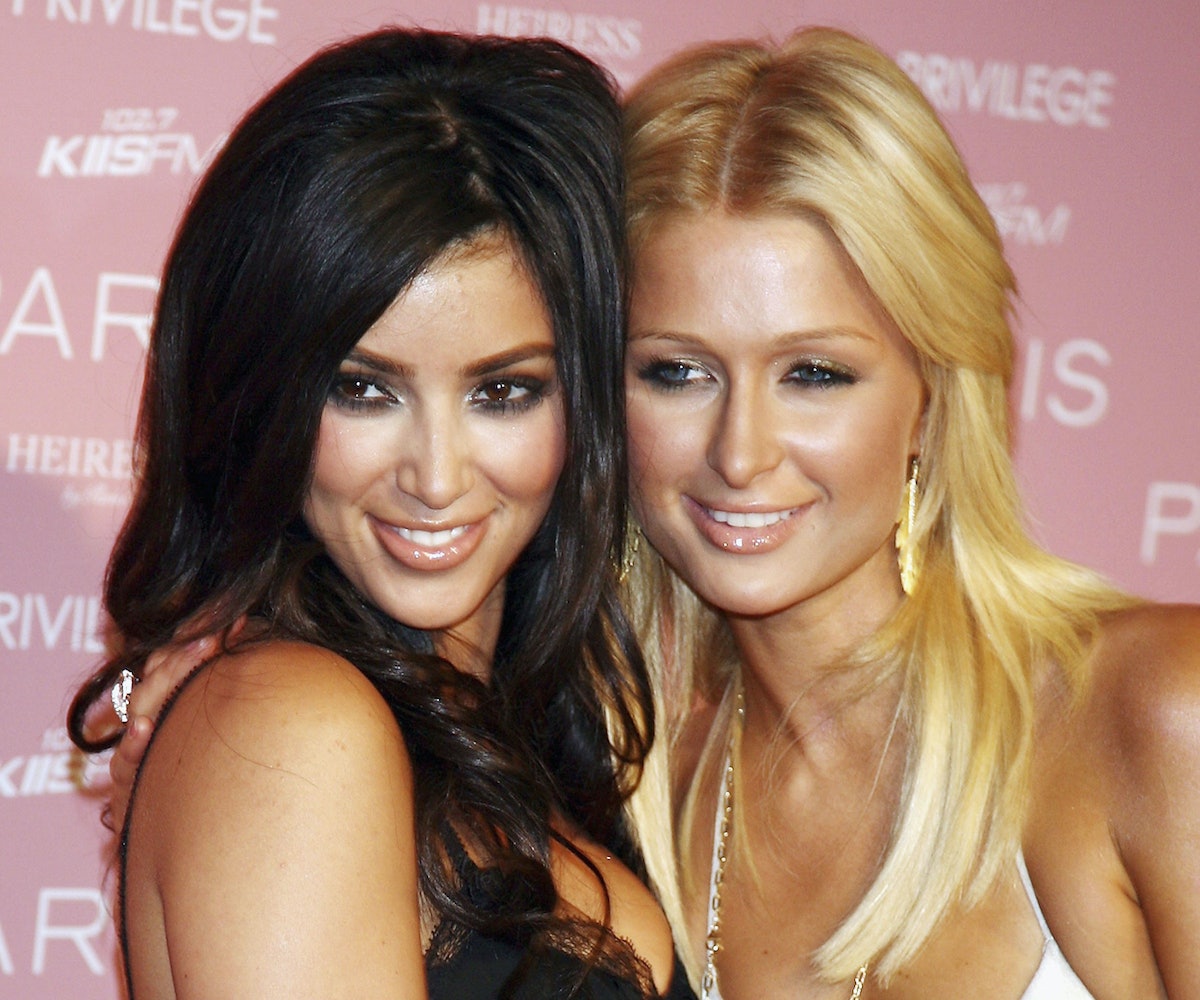 Whether it be a petty outfit post, a speculative rumor based on a background voice in a Snapchat, an announcement about their personal lives, or news of a new business venture, it's virtually impossible to go a day without seeing some article about a Kardashian or Jenner. And there's a reason for that: It is not, as some speculate, the fact that the family pays publications to cover them; rather, it's the simple fact that people are genuinely affected by their presence. The sisters have a combined 201.4 million Instagram followers and 96.8 million Twitter fans, and have made billions on their various video games and apps. They have even managed to affect millions of people and online commenters who are outraged by their mere existence. If you've ever wondered why you can't seem to escape the Kardashian/Jenner machine, it's because there's a massive market for them; you have created one.

In his new art documentary Famous for Being Famous, 22-year-old filmmaker Will Rebein, a student at FIT, explores the rise of these "famous for being famous" types, who seemed to climb the ranks of fame just for being young, rich, and pretty. Comprised of archive interviews, paparazzi clips, and intertitles, Famous for Being Famous outlines how Paris Hilton ushered in this new era of celebrity and influenced how media, popular culture, and the television and film industry operated, and paved the way for the Kardashians and Jenners.

In a way, it's a snapshot of how popular culture and public consumption has evolved over the past 15 years. In another, it's an argument against the hatred and animosity that is targeted towards these figures. As Rebein shows, there's much more to being a celebrity than showing up on the red carpet—these new celebrities have single-handedly boosted the economy and kept entire media empires in business. Below, we talk to Rebein about his unofficial documentary and the ideas behind it.

Where do you think the public's fascination with these types of celebrities stems from?

There’s a pull and tug between the public’s fascination with recognized people and the media pushing culture on us. When it became popular for television networks to create reality shows as a way to reduce costs, our interest in these stars expanded outside of the shows they were on. As soon as Paris and Nicole starred on The Simple Life, reality television became a huge phenomenon, because people generally have a curiosity about those who are wealthy. Yes, the media influences our interest in this lifestyle and often makes it seem very appealing, but certain media solely exists to fulfill our desire to see this celebrity content, which is so readily available. Gossip sites recognize the potential for financial gain from our interest in celebrity culture and use that to create controversy. We are the ones who continue to talk about these celebrities, whether it’s real life or in an online comment thread. As long as people talk in a positive or negative way about a celebrity, we are pushing that industry, and those in the limelight receive the benefit. Why do you think the Kardashians are so successful? All of these gossip companies would go out of business if people stopped commenting or reacting to stories and just ignored them, but people feel the need to share their opinions. Also, a lot of these reality stars become famous because they are relatable on some level, which allows many people to fantasize about being in their position—but some people take this fascination to extreme level, such as the Bling Ring. Overall though, it’s a way for people to distract themselves from the stresses of everyday life.

There's an extreme amount of disdain targeted toward those who are "famous for being famous." Why do you think that is?

Well, specifically with Paris and Kim, they grew up wealthy, so people assume that the businesses they’ve created happened without any effort. They think that they are making millions just for existing, but everything they do uses strategy, marketing, and promotion—like any business. Also, most people still don’t understand what reality television is: a job. Filming can occur for months at a time with long hours each day. People like to generalize these figures and put them in a box because they don’t want to think that maybe a reality star can be a savvy business person.

In Famous for Being Famous, you suggest that Paris Hilton provided the "model" for Kim Kardashian and others of this new celebrity, but have you seen any evolutions in the way that these new celebrities act and interact with both the media and the general public?

Social media is a huge tool that has evolved the model of celebrity. It’s so powerful because it allows [celebrities] to sustain a large fan base and interact with them on an intimate level while simultaneously interacting with a huge group. When Kim spoke about her video game in a 2014 interview, she stated that she would ask her fans which perfume bottle they preferred. Some people think social media isn’t real, but it has real and valuable information that can be gained from using it. It’s a business.

Most of the documentary is footage of hounding paparazzi. Have these "famous for being famous" celebrities sacrificed their right to privacy?

I don’t think so. Engaging with the paparazzi is just another aspect of their businesses. However, Paris was one of the first pioneers of reality television, so there’s no way she could have anticipated how this paparazzi culture would evolve and become be highly invasive at times. There’s definitely a trade off between less privacy and more fame, but I’m sure they’re able to maintain some level of privacy.

I thought it was really interesting how many times Paris said that she had created this alternate persona for The Simple Life that was a very different version of herself, but the media never focused on that. Why do you think that is?

One of my goals of the film was to contrast the media chaos occurring during Paris’ career with some of her interviews where she revealed her true self to show that there was a disconnect between what the public assumed about her versus her actual identity. Reliving some of these moments allows the viewer to gain a new perspective and see the bigger picture of her career, and recognize how heavy of an influence the media has on our perceptions. Part of her business was marketing a false image of herself created through the show, which is genius. Do you think Paris Hilton could have over $1 billion in perfume sales or 40-plus Paris Hilton retail stores internationally if she wasn’t smart? It’s fascinating how people couldn’t see past that image and see Paris for the business woman she is. Reality television was still so new during the early 2000s, so people took Paris’ character on the show literally and believed that’s who she was. But I guess it wouldn’t be as interesting to watch if people thought Paris was intelligent on the show.

Given that Paris, Nicole, and the entire Kardashian/Jenner clan have created massive, successful business empires, does "famous for being famous" even exist anymore?

No, social media has made that concept obsolete. “Famous for being famous” is now somewhat of a dated term, in my opinion, that was created to generalize a category of celebrities during the new Internet era of pop culture that occurred shortly after the new millennium. Living in New York City, I have seen so many YouTube campaigns on the subway, billboards, and buses. Being a recognized personality can be extremely profitable, and there are so many different categories and levels of fame now, so stars are classified by the media platforms they most frequently use to promote themselves, such as reality television, or even Vine.

Why have the Kardashians and Jenners become so successful while other reality-TV stars continuously fade into obscurity?

Well, for one, other reality stars don’t have Kris Jenner as their manager. I think the Kardashians have remained in the spotlight because their careers started when social media was becoming more integrated into everyday life. We were now "keeping up with the Kardashians” every day through tweets, Instagram photos, or by watching their show. The amount of exposure they have is huge, allowing them to partner with major companies to promote their own products. They are even creating their own media channels through their apps and websites. One of the most critical aspects of their success is because of how big their family is and that many fans have a favorite Kardashian or Jenner member that they can identify the most with. Each member of the family has their own various products or projects and an individual storyline on the show that circulates through the press and ultimately adds to the bottomline of their brand. When one Kardashian or Jenner member has a success or exposure, they all benefit.

NEXT UP
Culture
The Madonna Biopic Is Being Scrapped
Culture
6 Shows To Binge Once You've Finished 'The White Lotus'
Entertainment
Gracie Abrams & Gia Coppola On The Joy Of Free-Flowing Collaboration
Entertainment
Bad Bunny, Lizzo, Kim Petras Will Perform At The 2023 Grammys
Style + Culture, delivered straight to your inbox.