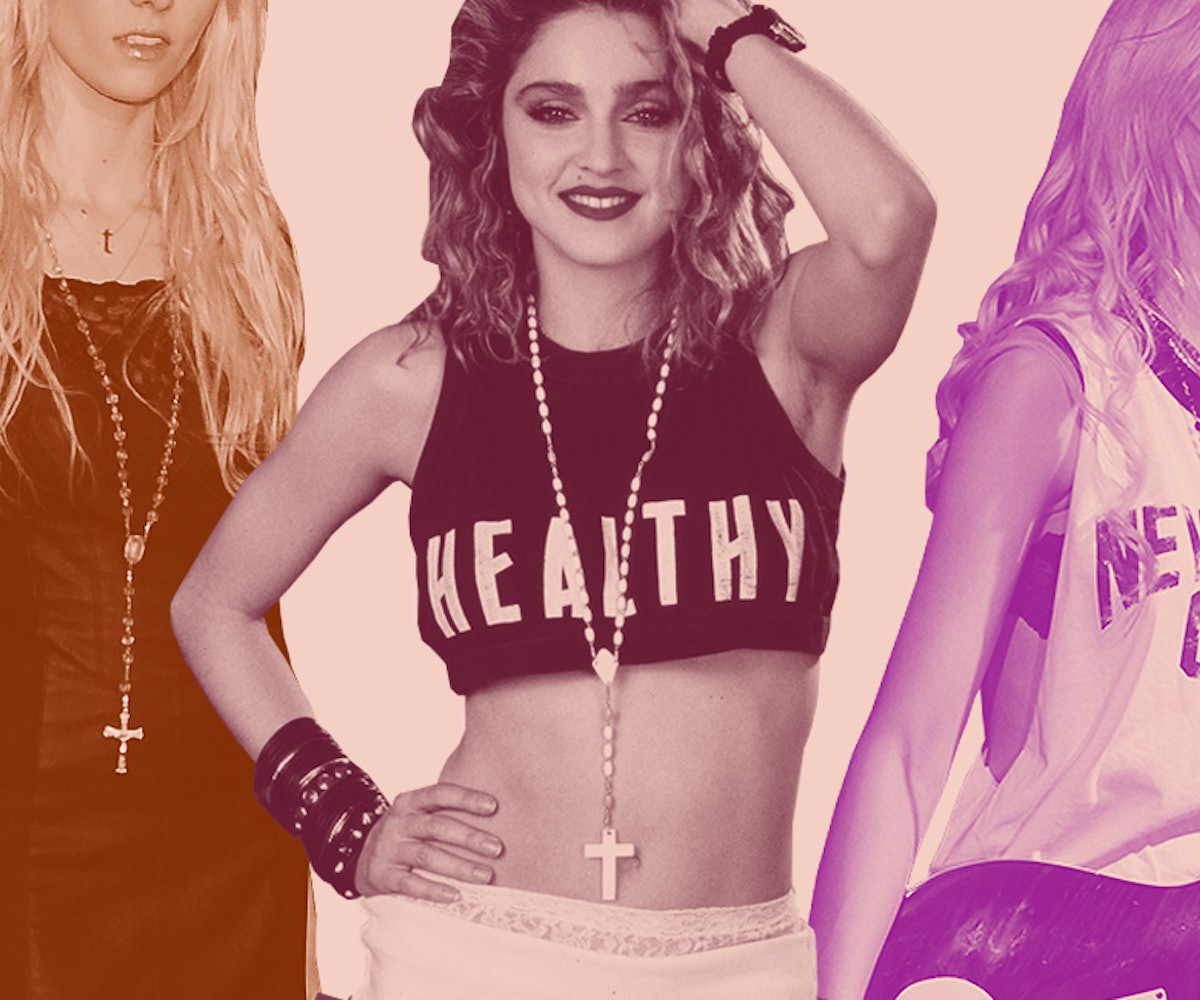 I lost Jesus at the club. It was spring of 2010 at a now-defunct (but never forgotten) Brooklyn party called Germs. I was wearing an H&M shirt dress with black lamé leggings and military boots borrowed from my roommate-boyfriend. I don't remember much of the evening, but I do remember getting home and taking off the rosary I had worn for purely sartorial reasons, and noticing the crucifix had disappeared. Somewhere between one too many PBRs and dancing underneath the hazy mirror ball, Jesus flew off the chain.

This wasn't any rosary; it wasn't something I'd bought at a mall. This rosary had been with me since my first communion, blessed by the bishop on hand. It had meaning. And yet, at that point, I had spiritually lost Jesus many years before, when I'd been told that praying would help me not be gay. That obviously (and thankfully!) didn't work, but I still was unsure about how I felt about the whole thing, wondering if I should feel bad. And if, in fact, wearing a rosary as fashion was bad? I was hardly the only person to do so; I was actually wearing one in order to emulate the iconography used by my personal icon, Lady Gaga. But with more attention than ever being paid to religious symbols' inappropriate use in fashion, was it time to reconsider the use of the rosary?

With the 2018 Costume Institute exhibition, centered around the intersection of Catholicism and fashion, opening this week, the question is up for debate again. Rosaries have long been a punk symbol—the ultimate anti-establishment accessory. But in the decades that have passed since the rosary was first employed ironically, the meaning has detached itself from the symbol, making it more an aesthetic choice than a political one. This has made some people question its use at all. New York-based stylist Lex Robinson considers it to be "rather gauche," relating the aesthetic reason to someone wearing a Native American headdress at Coachella. Robinson says you should know the symbolism behind something like a rosary before wearing it.

Shea Daspin, a New York-based stylist, agrees. "I support people's desire to express themselves, especially through fashion, but l think that people who wear rosaries tend to undervalue the agency actually required to be part of a religious, or spiritual, community," Daspin says.

Perhaps, but that's unlikely to change, as the number of people who identify as non-religious has tripled since the '90s. More and more people are turning away from organized religion and, in turn, the meaning attached to something like the rosary. Plus, as the corruption and pedophilia within the Catholic Church have come to light over the last many years, it makes sense that people would utilize Catholic symbols to show their own anarchic feelings. But it all comes down to the individual. Stylist Heather Newberger doesn't find a problem with accessorizing with a rosary, though she does recognize how someone might. "Religious iconography has been so culturally denigrated over the past decade, that something like a rosary now holds little value beyond whatever intrinsic meaning it has to its beholder," she says.

Plus, how could channeling your inner Kathryn Merteuil ever be a bad thing?

NEXT UP
Fashion
Meet The Depop Seller Making Belts Out of Tiny Bonne Maman Jars
Fashion
Apple Martin Is A Chanel Girl Now
Fashion
R&B Artist María Isabel Is Making Room For New Style With Nuuly
Fashion
Telfar Thinks You Need An It Wallet To Go With Your It Bag
Style + Culture, delivered straight to your inbox.