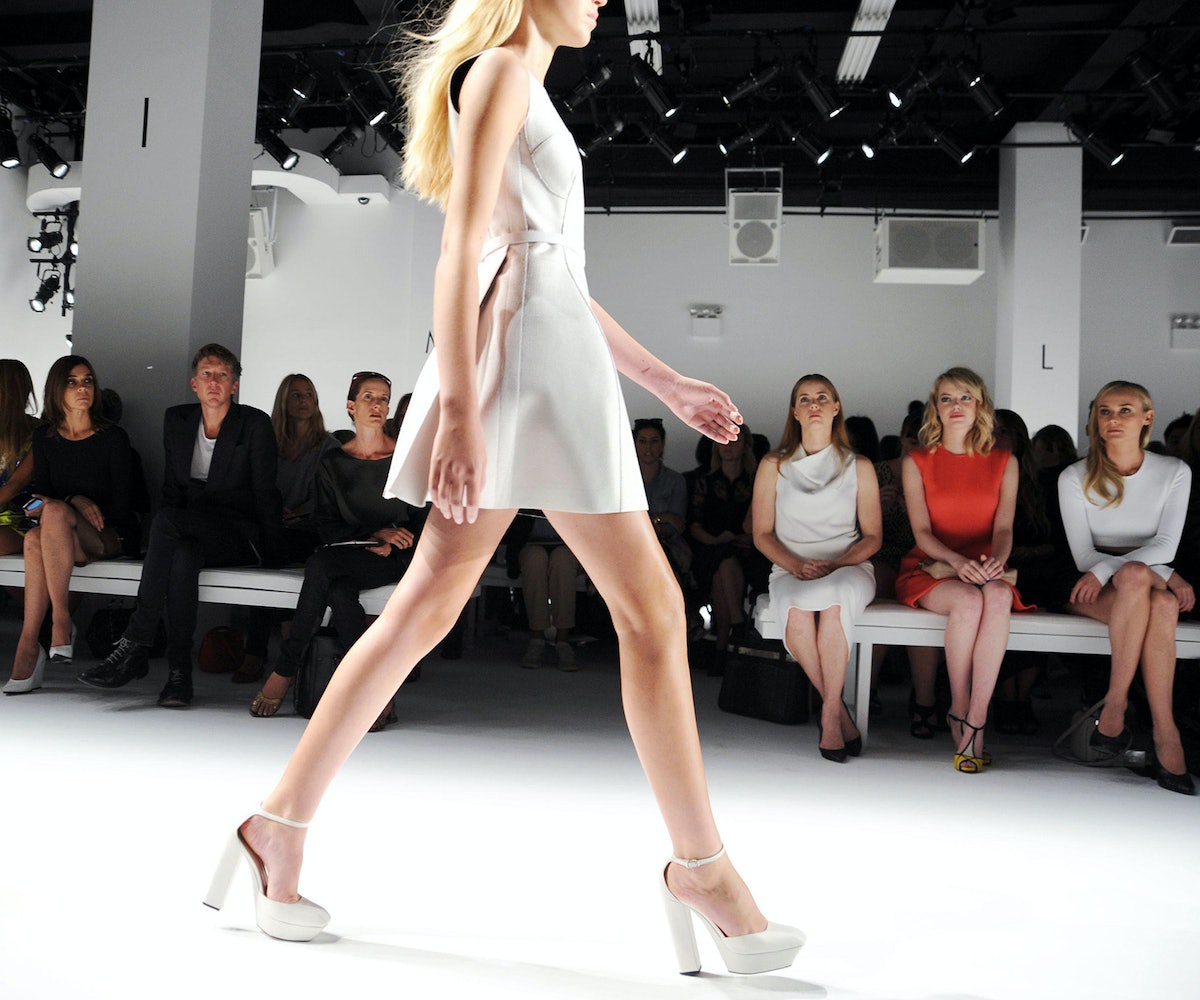 Ready or not, here it comes! Yep, it's Fashion Week time again. The spring 2014 shows kick off on Thursday, hitting New York City in a flurry of prints, textures, and gotta-have-em clothes. But before all that goes down, it's time to consult our crystal ball—otherwise known as fellow NYLON editors—about what exactly we'll be seeing on the runways next week. From the fashion and beauty trends, to the songs popping up on designer soundtracks, to that girl who is somehow front row at every single show, see our #NYLONFW predictions below and stay tuned next week to see if we were right!

Pastels: "Resort often alludes to ideas designers hope to develop further for spring and we saw a lot of pastel. Also, we've been doing a dark grunge thing for a while now so I think designers will be looking to softer colors and more feminine shapes for spring." Rachael Wang, Market Director

Transitional dressing: "Perhaps it's the un-summer weather we've had in NY with rain and cool temps, but I feel like traditional rules for seasonal dressing are beckoning obsolete. People wear white all winter now and I've been wearing felt hats and boots all summer. I wouldn't be surprised to more transitional styling and lots of investment pieces that can be worn through several different seasons." RW

Bright lips: "The fall/winter runways were pretty dark makeup-wise (deep berry lips and blackened lids) so I'm hopeful that the runways will be packed with bright, bold colors on eyes and lips. Vibrant hues would also be a nice break from so many seasons of no-makeup makeup." Katie Dickens, Beauty Director Braids:" Game of Thrones is coming back this spring so maybe the anticipation of that will inspire some intricate Khaleesi-style braids." KW Nail texture: "In terms of nails, I think texture will be huge— I definitely don't see nail art going anywhere." Jade Taylor Statement-making hair: "I think the '90s club kid revival and Miley Cyrus have almost solidified the double-buns to make an appearance somewhere. I think we'll start to see a lot of hair color (i.e. pinks, purples, blues, etc.) this season as well— and embellished braids! Think: milkmaid braids with jewels in them." JT

Lorde: "If you aren't already incessantly humming the hook to Lorde's "Royals" (especially the part that rhymes "diamonds on your timepiece" with "tigers on a gold leash"), we're guessing you will be by the end of NYFW. Ella Yelich-O'Connor's layered scale harmonies and the song's minimalist snap beat are tailor-made for runway stomping." Melissa Giannini, Senior Editor

Twigs: "Brands going for an edgy, cinematic effect might turn to Twigs, the somewhat mysterious U.K. artists whose splintered, airy electro-pop has been turning heads in the underground since she self-released her lovely-yet-ominous EP late last year." MG

King Krule: "After peeping a couple starkly becoming shots of King Krule in W and T, we wouldn't be surprised to find the stylish London rocker's echoed and raw surf-tinged guitar and dissonant growl providing a live accompaniment to a stream of punk-inspired threads. And what do you know, he'll be in town! We spy a gig at the Bowery Ballroom on September 9." MG

GIRLS IN THE FRONT ROW:

Allison Williams: "We saw the Girls star at a few shows last season, and considering that she was randomly at the VMAs (sitting next to Kendrick Lamar, no less), she'll definitely be vying for a front row spot at shows like 3.1 Phillip Lim, Jason Wu, and more." Rebecca Willa Davis, Executive Web Editor

CharliXCX: "Every season has a music It Girl at the shows, and this year I hope it's Charli XCX. A little bird told me she'll be in town, and Jeremy Scott's a no-brainer." RWD

Iggy Azalea: "Every season I hope that Iggy makes an appearance, and every season I'm disappointed. (Remember last year's catwalk rumors?) But considering her debut album is dropping soon, next week it might actually happen. It's about time people finally realized that this girl is a fashion force to be reckoned with." LD

MODELS ON THE CATWALK:

Abbey Lee: "She's on the cover of NEXT's show package, she's appeared in a zillion ads this spring, and her Met Ball appearance was just the re-entry to the modeling scene a girl of her status deserves. Plus, she's got a new black dye job perfect to premiere at the Anna Sui show." Steff Yotka, Associate Web Editor