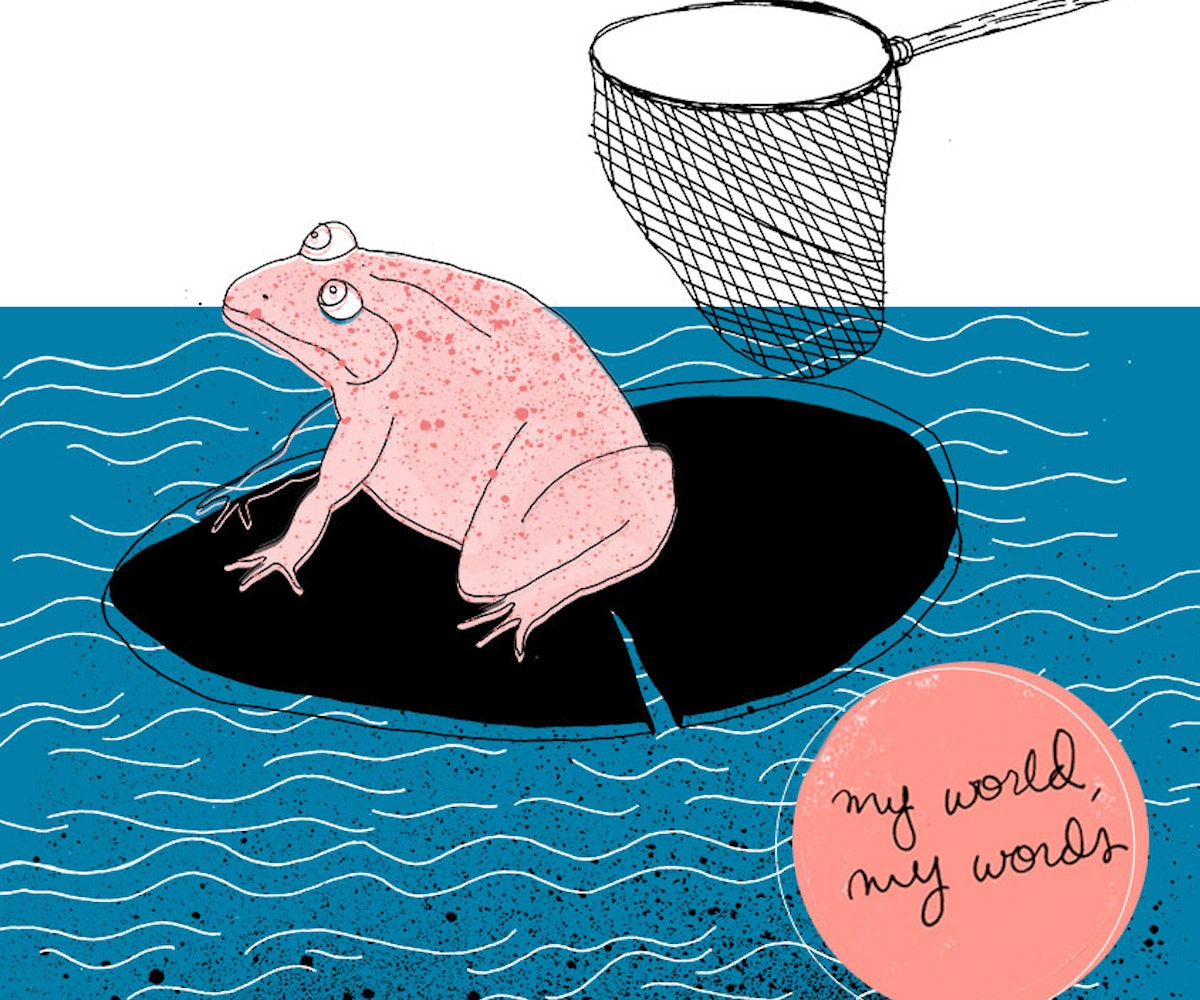 My World, My Words

is a series of first-person essays featuring totally unique, inspiring personal experiences unlike anything you've heard before. The most interesting stories are also often the most overlooked, so we're on a mission to find them and share them with you. Written by people from all walks of life, these essays will move you in ways you might not expect—and that's the point.

I had a friend named Lee, who was sweet. The world can be perfect in some ways, so Lee's last name was actually Sweet. We were matched through SAGE (Services and Advocacy for GLBT Elders) by a woman who deemed us, very correctly, compatible:

I was an archivist who fantasized about moving into my then-girlfriend's (now fiancée's) brownstone and collecting beautiful things together, and Lee was a retired graphic designer who already had a brownstone full—damn full—of beautiful things, the most exquisite things. I believe he was born discerning: As a boy he asked his dad for a Chippendale for his birthday; I think he was given a baseball mitt instead.

My own grandpa, who raised me, passed away when I was 25. Joining SAGE as a friendly visitor was something I did with very specific tenderness, and an awareness that I might end up having my feelings hurt—I didn't want to lose anyone again. But my desire to connect with someone from my Pop's generation, especially someone like Lee—someone who was critical but sensitive, an introvert whose sudden, cutting wit reminded me of Flannery O'Connor, a gentleman in his 80s who had been in the Army during World War II, who was incidentally gay—eclipsed my anxiety. And all I had to do to meet him and spend time with him was hop on the G train.

When Lee became sick suddenly, I started visiting him in the hospital instead of at his brownstone. I was having a late twenty-something crisis—what did I really want to do? I was becoming a Jack of all trades and what I really wanted was to do one meaningful thing. I said to Lee, "You're old and you're wise." This made him laugh. I continued, "What do you think I should do?"

At the time, he couldn't speak. Remembering this pains me, but also I smile when I think about the fact that Lee and I had become intimate enough for me to compress his tongue to help him strengthen it so he could start speaking again. He wrote down his answer to my existential question, telling me I should go back to the frog pond because I was happy then.

When I was a kid, my grandpa and I would go "frog hunting" together at the pond down the road. We would roll up in the middle of the night and Pop would shine his bright police light (he was the retired chief of Scarsdale) at the pond and we waded into the water together, bravely disregarding the snapping turtles that were big enough for me to catch a (terrifying) moonlit ride on. I was seldom seen without a bullfrog in those days, or without a net attached to the end of a broomstick, duct taped to another broomstick, voyaging out into the water. Call me Ishmael.

It's no surprise that I told Lee about the frog pond, since it's single-handedly my favorite thing to remember from my childhood. But I couldn't believe that his answer to my question was to conjure this memory, and at first I felt grief that I couldn't go back to the pond, and that I couldn't be with Pop anymore. But I realized that my grandfather had taught me to be patient, get dirty, respect nature, use my body as a tool, to make weird jokes, to love—a love big enough that it included (and includes) tadpoles.

And I realized that as much as I wished to go back in time and be with him again and to learn those things again, what I wanted more than that was to keep moving forward toward a future where I would teach those things to my own child.

My aunt once gave my grandparents (her parents) tiny tapes to record the stories of their lives on. If I remember correctly, my Gram passed on this; she's always been a living, moving thing—like a shark—who, while poised and charismatic is, not at all narcissistic and not at all the type to slow down to record any of her pithy or sentimental remarks. My Pop, though, recorded things like this: "If ever you want to attain immortality, have a little of your better self rub off on a child, for a child is the father of man and he is an image of yourself."

The nostalgia I have around frog hunting persists. But Lee gave me a new lens on my beloved childhood memory: I began to see it from my grandfather's perspective in addition to my own. It was a paradigm shift. Over the past weekend, I was up by a lake, the lake my fiancée learned to swim in. It is a fine lake where the gulping sounds of bullfrogs can be heard coming from both the grass and the water. I took off my shirt, and crept along the edge of the lake, until I took off my socks and boots and walked in. I don't mean to brag, but I still have it: I caught a frog with my bare hands, and walked the big guy over to my fiancée to show her while grinning so hard my face hurt. I am 30 now —I'm, as I always joke, the oldest I've ever been. And I've learned I have the capacity to channel my former, frog-hunting self, and my former, frog-hunting dad.

Dedicated to the memory of Theodore Tutera and Lee Sweet.

Growing Up With A Sick Parent

NEXT UP
Entertainment
Paramore's "This Is Why" & 9 Other New Songs Out This Week
Entertainment
Lindsay Lohan Teases Her Return To Film, 'Falling For Christmas'
Entertainment
Arctic Monkeys Announced A Huge 2023 North American Tour
Entertainment
Tove Lo Announces 2023 Dirt Femme Tour