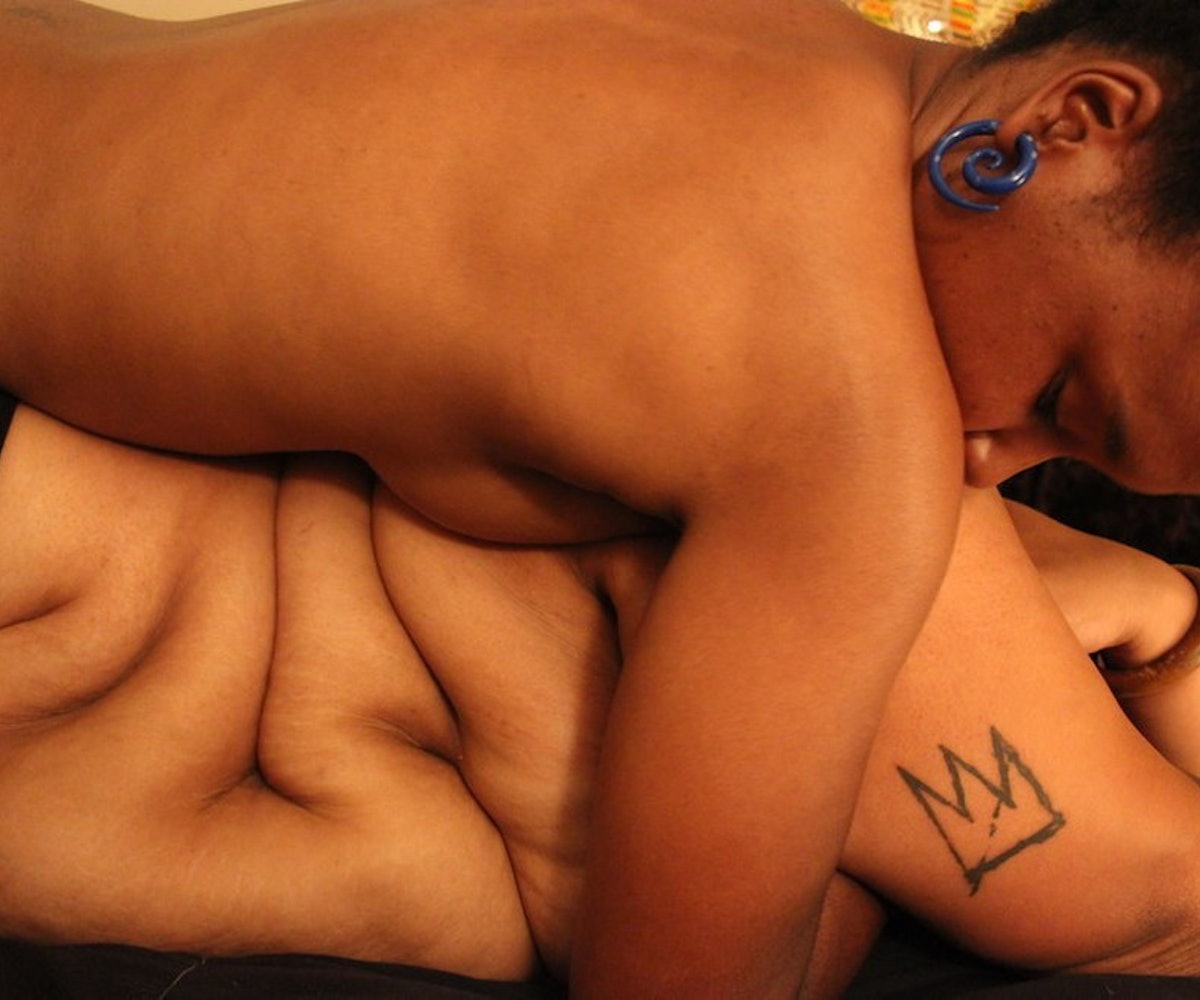 Staged by artist and curator Annie Rose, "Fatter IRL" leaves the pretension that can be typical of the art world at the door. Though each piece is reflective of the struggles this diverse set of women and gender non-conforming artists have undergone throughout their lives, the hierarchal division between artist and viewer, creator and admirer is broken down through the humorous and relatable theme that runs through most of the exhibit—a tongue-in-cheek tone displayed in so much of the artwork and clearly intrinsic to the artists' identities. Humor aside, "Fatter IRL" also displays the tenderness of fat women that many non-fat artists, writers, and creatives often fail to identify.

Through this exhibition, Rose wants to remind the world that fat and beautiful are not separate identities. Being fat does not disengage agency, denote ugliness or stupidity, does not devalue talent or credibility. And while Rose aims to enlighten the viewer on the truth of fat existence, when it comes down to it, "Fatter IRL" is by and for fat women of the world. Through all the stigmas, immense stereotypes, and beyond, Rose encourages “fat people to celebrate fat people.”

Perhaps a surprise to some, the shiny pink bow that ties the whole exhibit together is its roots in advocacy and representation for sex workers and the very special relationship that exists between fatness and sex work. Rose, whose former ties in sex work allowed her to access a slew of artists from that field, says that sex work is one of the few arenas where fat women are celebrated.

This exhibit closes Saturday November 5, with an enticing party that’s open to all, but Rose and I sat down to discuss some of the resounding themes and feelings that have made "Fatter IRL" so groundbreaking.

Why is it important to make a show like "Fatter IRL"?

Were there any difficulties in putting "Fatter IRL" together?

It's a really hard thing to organize because fat people are very used to shrinking, not wanting to call attention to the fact that you are fat. Which I think is part of why it's so big on the internet; it's kind of what the title of the show is, it's a play on that—"Fatter IRL"—and we always feel like we have to tailor our image and try and shrink ourselves down as much as possible, but chances are we are fatter in real life.

How did you pick the artists to feature?

It's a lot of people who had a big social media following but who don't get recognition as artists because they are fat. I noticed that in the art world, the people that get the most representation, even if it's queer or feminist art, are still conventionally attractive, thin white people. I think beauty politics plays itself out very much in the art world. People who are deemed more attractive get more attention, and I also think that there is this hierarchy of what is and isn't high art. I really just wanted to get together all these different mediums that kind of have the same feel, they all have the same aesthetic going on, very personal, very feminine.

How do you feel this exhibit helps to break down the negative stereotypes of fatness?

Because we've set up these standards and repressed the ability and allowance to be attracted to these different people and different body types.

Exactly! It becomes a fetish; it becomes subversive for people when they are attracted to fat people. Really, you're just attracted to a person. And then people make it a part of their identity that they are attracted to fat people because it's such a subversive thing. The idea that people could actively desire and prefer fat people is shocking. It's always uncomfortable for people to realize that they could be attracted to a fat person. This show is uncomfortable for people because it's hard for people to see fat people thriving and flourishing because we put so much self-hate into people in our culture that there is the emphasize on the necessity to exercising and how it all leads to success, and the people who aren’t doing so are thus failing. When people see fat people being fat and having others love them, even though they are fat, I think people get really angry and upset because it's like what was it all for? All those years of making sure they don't look like that, and here are these fat people doing their thing and doing it well.

In a sense, "Fatter IRL" is not only the curation of artwork, but the curation of space, specifically generating an environment of acceptance, love, and freedom. How has that affected the people who have come to see the show?

People felt really comfortable around the work, around work that represents them. When an art gallery is only showing work by skinny white people, why would people come out for something they don't feel welcome at? You don't ever represent them. We had all different kinds of people here because we had all different kinds of artists. Geographically, racially diverse, sexually diverse artists. People were touched to see people like them, represented in a beautiful way.

How does "Fatter IRL" change the stigma of being fat, particularly in the art world?

Being a fat person, you see these images, and it's so eye opening. I spent so many years hating myself, but I am awesome! There's a running stereotype that you can't take beautiful images of fat people. But I think it's that people don't know how to do it, they don't know how to dress them. Yesterday, I was thinking about shoots where they take these skinny models and put them in these industrial spaces to photograph them. I was thinking about fat people in that space, and I realized I wouldn't put a fat body in a hard, cold industrial space because I am fat and I know how to make fat people look good. I would put a fat person in an environment that reflects the softness, somewhere that truly emphasizes the beauty. People just don't know how to do that. And they're also lazy and just don't want to do it!

A male point of view seems to be missing from this show. Was that intentional?

I asked fat men to be in the show, but no one answered me. I think fat men consider it less a part of their identity because men are allowed to take up space. The one time I want them, they don't show up. The one time we want you to be around! There are people of all genders in this show, I didn't discriminate based on gender—it was only if you are fat. It just so happened that women and gender non-conforming people are the ones who followed through.

Why do you think the negative stigma of fatness affects men differently than it affects women and gender-nonconforming people?

I honestly believe that most of it is rooted in misogyny and women not being able to take up space. I think for fat men, it's a type. People like big cuddly teddy bear men. It's very different.

What was the overall goal of "Fatter IRL"?

I always say visibility is a great thing because people feel validated seeing themselves represented. But for fat people especially, visibility can be really tricky because fat people are hyper-visible, people who are marginalized and oppressed are hyper-visible, people of color and visibly queer people are hyper-visible. So that opens people up to harassment and just maliciousness. It’s a very double-edged sword, so I really wanted to create a space that was made by a fat person, and mediated visibility, an environment where the artists are celebrated and loved automatically. People come because they think this is a great thing and they want to see it.

Why is removing the negative stigma behind fatness so important to you?

Fat acceptance is literally beneficial for everyone. If one group of people isn't living freely, then none of us are. If everyone is always comparing themselves to fat people on this bizarre standard of body hierarchies, you are never going to be happy with your own body either. You're always going to be worried that you look like that, or you're always going to think that you're better because you don't look like that. To accept fat people for how they are is beneficial for every person, because then people can't prey on our insecurities. Consumerist, capitalist culture can't play on our insecurities if we don't let them. The diet industry is huge because they make sure people hate themselves. Eliminating racism, eliminating homophobia and misogyny is beneficial for literally everyone. It's the same with fat acceptance.