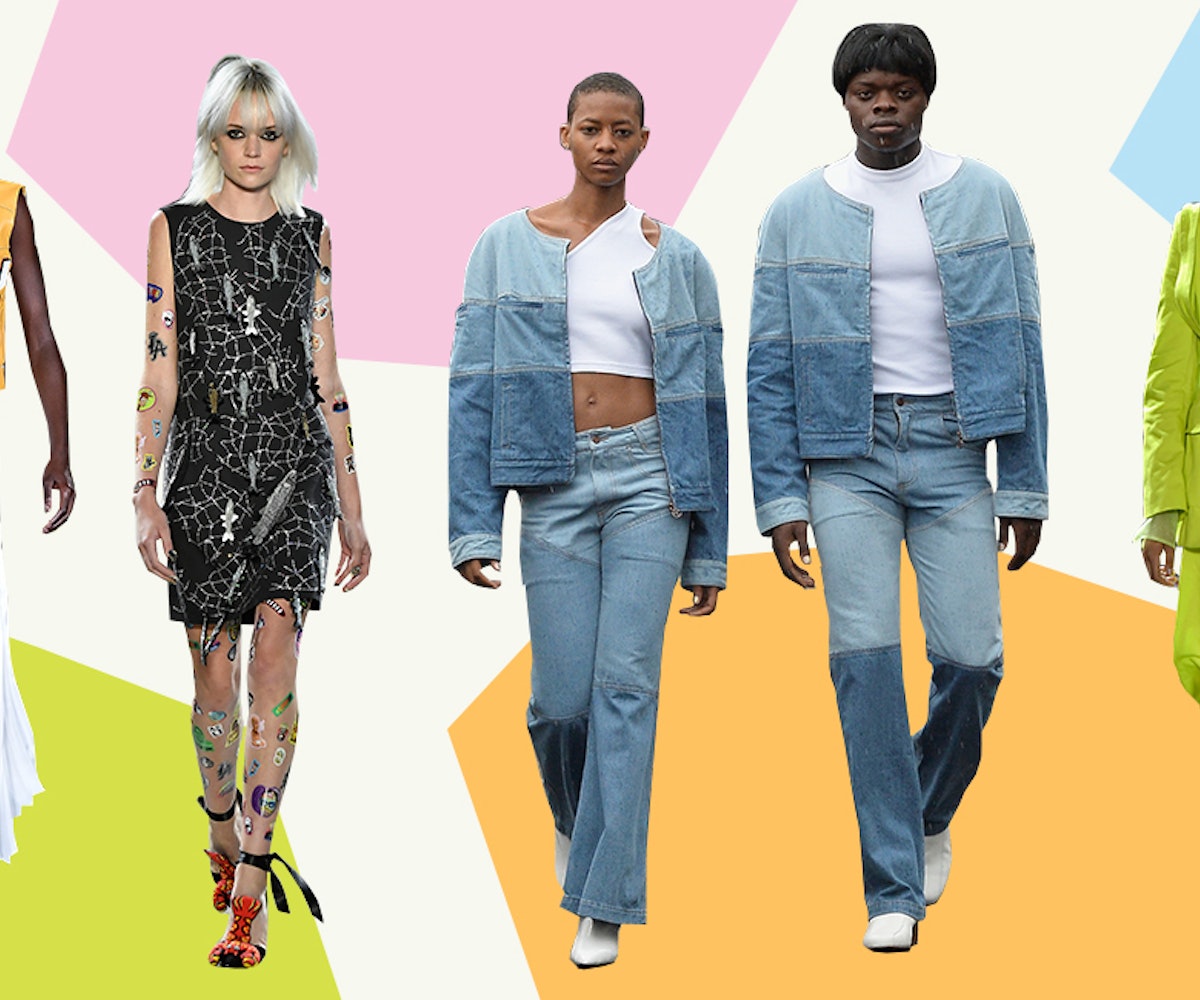 New York Fashion Week can be... how do we say this delicately... underwhelming. This season, though, felt different.

The shows were exciting—filled with diverse models, live gospel choirs, and noteworthy front row guests. And, of course, incredible clothes, the kind that make us excited about fashion again. It made endless days of running around worth the blisters. There were prairie dresses and impractical flower crowns and wearable bike shorts. Ahead, we gathered the looks we'd like to see on our bodies come next spring. Or, whenever retailers start knocking off the designs—whichever comes first, really.

“Never thought I was an ‘80s-loving chick until I saw this number from Christian Siriano. Do we think the sleeves are removable? Because I wouldn’t mind adding this fun detailing to the rest of my all-black wardrobe.” —Taylor Bryant, web editor

“When I die I would like to be buried in this neon green pantsuit by Matthew Adams Dolan.”—Jenna Igneri, associate fashion and beauty editor

“I was obsessed with this Di$count Universe look, mostly because I love a good printed strap situation. Even better when it's an entire dress made up of straps! Throw in a little tulle, and you literally have the fantasy dress of my dreams.” —Sandra Song, senior entertainment editor

“I haven't been a huge fan of prairie-esque dresses—until I saw the ones at Ulla Johnson’s show. Working with craftsmen from Nairobi, Peru, and India, Johnson sent out the most stunning collection of dresses and full skirts featuring multihued tapestries and prints, ruffles and frills, and exaggerated volumes.”—Irina Grechko, managing editor

“Cover me in ribbed mock turtlenecks year-round, to be honest, but this is the look that I'd most like to be wearing next spring—when it's never as warm as I think it will be. Also, it's hard to tell from a still photo, but these flowy pants had the most gorgeous way of moving about the model's body, and I love the peeks of exposed skin. Actually, can I start wearing this now?” —Kristin Iversen, executive editor

“I'm really into this season's body stickers trend, which Libertine took to a new level in its show. The sticker-coated arms and legs brought me back to my 10-year-old self, who'd be thrilled to see her signature look now taking over the runway.” —Dani Okon, video editor

“This look by Marrknull at the VFILES show was one of my favorites, mostly because I want to get married in a pink visor now. Also, as a total athleisure bum, incorporating a racing stripe into a pink wedding dress is kind of everything.”—SS

“I have been eyeing the bike shorts trend for a while now, but didn’t think my more classic style would allow me to pull off the sporty look. Enter this look from Dion Lee that borrows the bike shorts silhouette and makes it into an elegant blazer-jumpsuit with side cutouts.”—IG

“Never been much of a pink person myself, but I’m more than willing to become one for this pantsuit alone.” —TB

“After a two-year hiatus from NYFW, Rodarte returned and didn’t disappoint. Everything from the stunning Victorian goth looks (the show took place at the New York City Marble Cemetery in the rain!) to the rose flower crowns and the bold makeup was a standout. If I had to pick one dress though, it would have to be this ruffled masterpiece that has 'Sofia Coppola film' written all over it.”—IG

“TBH, I never really wanted to get married until I saw this Rodarte look.”—JI

“Very excited to force my future boyfriend to wear this with me so that I can fulfill my longstanding Britney Spears and Justin Timberlake denim fantasy. This version is just, you know, a little more wearable.”—TB

“I am a huge fan of shower caps, so it shouldn’t be surprising that I fell in love with the turbans resembling the bathtime accessory at Anna Sui’s show. And I would totally pair it with the pajama-like set and sandals with socks while watching Netflix and sheet-masking.”—IG

“I’m dying for this feathered open knit dress from Pyer Moss. Is it practical? Not really. Is it perfect? Yes.”—JI

“There are few shows I would wait outside for… in the rain… when it’s freezing… and at night, but Pyer Moss is one of them. Kerby Jean-Raymond consistently creates his collections with black culture in mind, and this year was no exception. One of my favorite parts of this year's lineup was his collaboration with the ‘90s-era label FUBU and, specifically, this yellow vest. It’s not visible in the picture, but the back of it reads: ‘See us now?’”—TB

“This dress in every color of the rainbow, please!”—TB