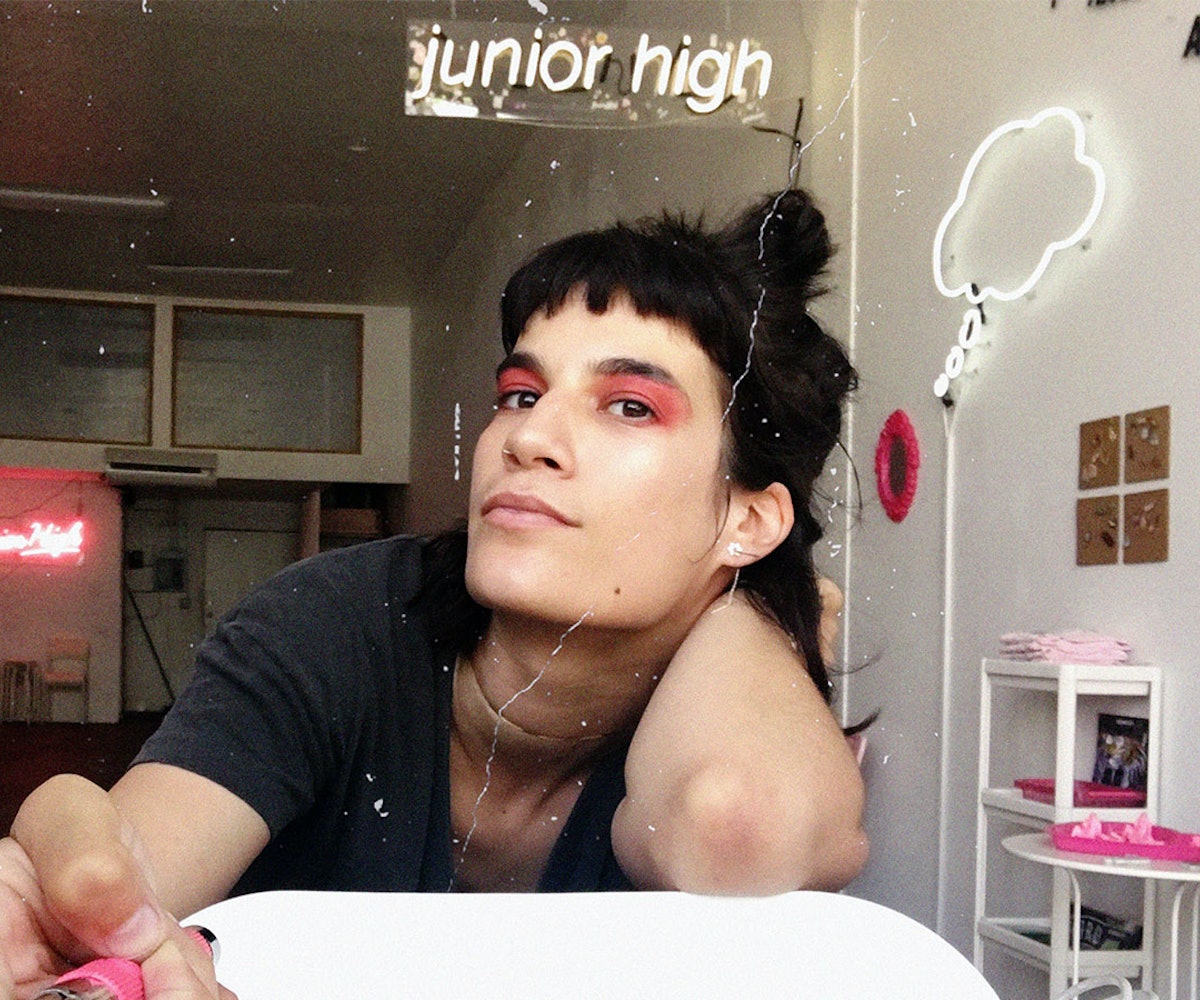 Los Angeles has long been known for its thriving art scene, filled with eclectic and eccentric talent as diverse as the city is large. It’s one of the main reasons illustrator and animator Faye Orlove moved to L.A. from Boston back in 2012. “I was really excited about it because I felt there was a lot going on,” she recalls, “but coming here, especially from the East Coast, it was tough to break in. Everything was so spread out and everyone seemed very insular.”

Her solution was to open her own gallery, and champion a doors-always-open approach to curating. Enter Junior High, a community space focused on promoting the work of marginalized young artists through gallery shows, events, and arts education. Orlove, who’s worked with musicians like Mitski and for clients like Pepsi and The Fader, used Kickstarter to help launch her dream space in early 2016. Since then, her little slice of real estate on Hollywood Boulevard has played host to art shows by Caroline Goldfarb (aka Official Sean Penn) and portrait photographer Grace Pickering, as well as concerts by Frankie Cosmos and Waxahatchee, writing workshops, pop-ups, Planned Parenthood fundraisers, comedy nights, film screenings, “Ask a Feminist” Q&As, and weekly yoga classes. Most importantly, though, it’s given countless young artists a chance to showcase their work in a gallery.

While nearly all of Junior High’s programming has come from the minds of its patrons, this summer Orlove is taking that idea one step further. Throughout May, she’s accepting applications for Junior High’s first artist residencies, the recipients of which will have an entire week to curate events in the space. Leading up to the gallery’s one-year anniversary, we spoke with Orlove about creative passions, professional challenges, and what it means to turn something you love into a full-time job.

When did you first realize that you wanted to open up an art space?

It was a really long time ago. I was working in Boston at a venue called Middle East, booking bands, running the door, paying out people—whatever no one else was doing that night, I had to do. Everyone who booked stuff was very white and male, and everything they were booking was hip-hop and dude punk bands. I loved it because I was working with all my friends, but I hated the shows. I complained enough, and eventually, they let me book a show. It was all-girl bands, and it sold out. It was the first show to sell out in maybe two years, so they let me keep doing it, and I kept booking more bands I cared about. I loved it. I also volunteered at a Girls Rock camp every year, which was very teen-centric, and I started thinking how cool it would be to not just root these kids on, but have something to teach, like animation or music videos or zine making. I thought, One day, I’m going to open a camp that’s just like this, but for art, and it will culminate in a gallery show where all these girls will have their parents come and see their work on a wall. I think it was the combo of those things that got me thinking about having a space that was about activism and art.

How did you settle on the name Junior High?

I never really know what to say, except that I came up with a bunch of ideas and that was the one my mom liked the most, but I thought Junior High hinted at teens and education, which were my primary focuses. As much as my background is in music, and there’s been a lot of music here, it was never my intention for that to be the primary focus of the space. If we have music, I want it to be politically driven. Like, we’re doing a show in two weeks with Lisa Prank, but it’s also a fundraiser for Girls Rock Camp. The opening band is a band from the camp called Pinky Pinky. That’s the sort of thing I wanted the space to hold. I wanted it to be education at the forefront.

What were some of the biggest lessons you learned in the process of opening the space?

The first couple of months, I’d say the biggest struggle was learning to trust myself. I doubted every decision I made. When I painted the steps, I was like, “I shouldn’t have done that.” When I got the neon sign, I was like, “Ugh, it’s not the right font.” There wasn’t a single thing that I didn’t want to just kill myself over. I couldn’t sleep. I couldn’t eat. I was crying all the time. It felt like imposter syndrome; I just kept thinking, I am not the one to be doing this. What made me think I could? I have no business experience, no venue experience, no art experience. It was really rough. I ended up going to a therapist, and that helped me realize that everyone else is just as confused as I am. That’s a big thing I tell my teens all the time. I tell them the person they think has it all figured out is 10 times more confused than they are. I still struggle; it’s not just a switch you turn on and off. But thinking that way, helped me realize that I do have taste and a voice and an aesthetic and a reason to be doing this.

Yeah. I appreciate that people are giving me flack and questioning my intentions and asking whether me promoting a black girl is performative or not. In a way, I like that challenge, and I like to be checked, but I also sometimes think that people really want me to fail, or want other girls to fail, or want white women to fail. And that’s valid, so I can’t get mad at it. It’s more a matter of not taking things so personally and adapting, and maybe realizing that I did do something wrong. That’s been a really hard thing. I’m constantly asking myself, What could I be doing better? As a white person running this space, I’m realizing I need to be visible more, and I need to confront that, even though it’s uncomfortable. But the point of the space was it was never really supposed to be about me. My friend Liz told me this Dr. Su'ad Abdul Khabeer quote that says, "You don't need to be a voice for the voiceless. Just pass the mic" I get all these requests to do interviews and stuff for zines and school papers, and I just want to say no. She was like, "All you need to do is suggest 10 other artists they can contact." So now I suggest all the people that book events here and my friends, who maybe have more to say than I do. That’s been a really helpful mentality to have. It’s about me passing the microphone. I have the space, and I just want to let other people speak.

What kind of response did you get when Junior High first opened?

My inbox when we first opened was really funny. It was basically split 50-50 between boys who wanted their bands to play here and girls who were dying to help. My first thought was, Well, that’s about right. I would politely decline the boys’ offers and tell the girls to come in, hang out, let’s see if we vibe and what kind of help we need. A lot of people since then have reached out to help, but there’s only so much they can do because a lot of the day-to-day is responding to emails. My girls come in, and they help me screen print, clean, and run events when I can’t be here. I wish I could give them more. Like, "Did you finish your geometry homework? Would you mind relicensing my seller’s permit? Great, thanks."

I think people are starting to understand the concept a little better. Basically, you pitch the event, and if I think it fits the ethos of the space, and it’s inclusive and bringing about good, then we’ll put it on. It’s all community. So now, I’m getting a lot more emails about people wanting to do workshops and art shows, which is great. I’ve been declining most music offers recently, just because I want to step out of that sphere—and it opens us up to noise violations, and I don’t want to jeopardize the space. There’s a lot of people trying to sell their merch.

How do you decide what you say yes to?

I don’t really say no to people unless I think their work doesn’t have a true social commentary or an activist spirit. I like things with a sense of humor. I’m not much of protestor. I protested in high school because it was the only way that I thought I could be active. I was living in D.C., so it was what everyone was doing—marching and yelling, "Fuck big banks!" when I was 14. Now I see curation as my own form of activism. Offering this platform and handing over the microphone, that, to me, is just as important as the people marching in the streets. I don’t know how to explain it without negating others’ aggression and fear—and I feel all those things too. I’m grateful that there are angry people in the streets. I’m thankful for the people who are writing policy. I’m glad there are people suing people. But I don’t want the feel of Junior High to ever be angry. I want it to have a welcoming presence. I want it to feel like the world we want to see. When you come in here, I want it to be inclusive and progressive—the way all spaces should feel in a magic fairy unicorn world without Donald Trump. I think it’s so much more radical to provide a space that doesn’t dwell on [anger]. Instead, I want it to be the place where you can come in and talk about why you’re angry that your dad brought a new girlfriend over, or whatever it is that’s bothering you. I want teens to see older girls, or older artists that have found a place to feel okay. Not fully, and not every day, but just so they know that that anger isn’t forever.

Personally speaking, what have been some of the highlights?

I’m always shocked when I get these emails like, "I’ve been working on this zine for three years. Can we release it here? Can we sell it in the space?" It’s amazing. There are so many cool things that so many cool people are making, and every time I get an email, it’s like, "What a time to be alive!" In what other era would we have connected and would I get to see this beautiful piece of work that you put out with your friends? Every time I get a new follower on Instagram, I’m like, "Who are you?" Who are all these people who care about art and girls? We’re doing an herbalism workshop, and I’m still not sure I know exactly what it is, but [the woman who pitched it] was so cool and all about healing and holistic, natural ways to treat your skin. I feel so grateful because I’m learning about things I never even knew existed. I don’t think I’ll ever be unimpressed by the work people are putting out, or when people show an interest in the work that I’m doing.

To find out more about Junior High and Orlove's work, visit here; and check out some of the art of Junior High in the slideshow, below.