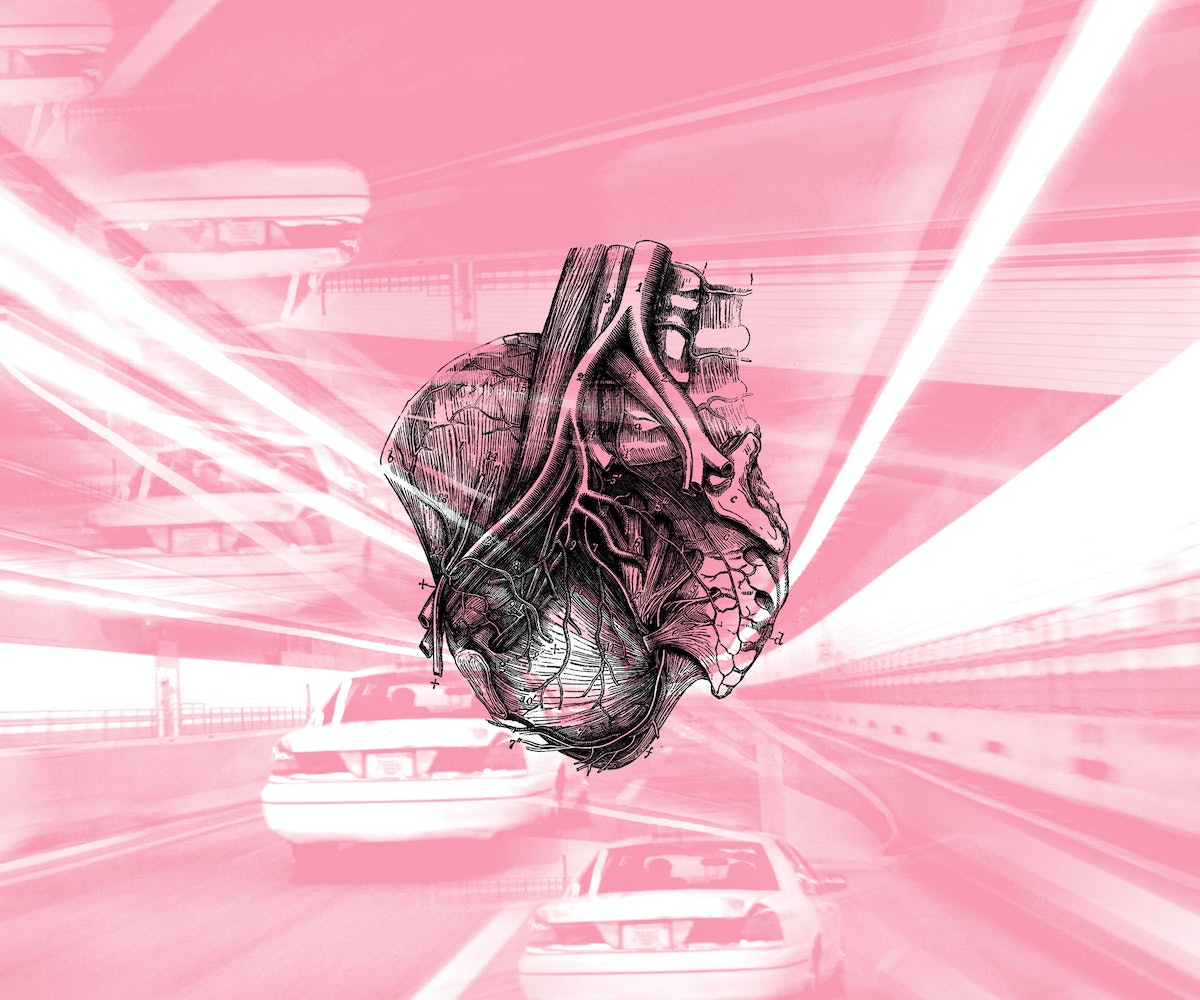 Amaxophobia is the fear of being a passenger. Claustrophobia, the fear of enclosed spaces, is its intimate, better-known cousin, but whereas the latter applies to constricted spaces generally, amaxophobia is journey-specific: In the attempt to get from Point A to Point B, the trajectories are endless, the destination can feel in doubt. A momentary lapse of attention (the innocent twist of a dial, a cursory glance at the digital map) and point B is abruptly extinguished. Not to mention the plethora of external threats: mechanical failure, a deer materializing from the trees, drunk drivers, a sudden, unexpected deluge. It’s a wonder we ever arrive anywhere.

For a seven-hour drive to Rochester, I packed three bags. The first contained necessities (formalwear for the wedding, sundries for our overnight stay); the second, provisions for the road (bottled water, toilet paper, an assortment of unhealthy snacks); the third, comprising five books (including a three-pound cookbook on the varied cuisines of China), two skeins of alpaca fiber, a set of circular knitting needles, a sketchbook, and a coffee can of colored pencils, was for the anxiety which loomed, inevitable, on the road ahead of me.

I was only casually acquainted with the marrieds-to-be, but in recent months, my husband had developed a deep friendship with one of the brides. In the early days of our own marriage, this would have set off alarms, for every woman real or imagined signified loss. This was because I didn’t understand that my husband’s love could be his own. I saw it as something large and sourceless, a kind of mythological power that collected within him from vast, inscrutable regions of the universe. My husband was merely a conduit and as such, it was less about the object of his love than timing. Rather than having selected me, he could have proposed to any number of women he knew. I had just been lucky, a chance player in the event of his love.

So far so good, I thought, as we drove at a comfortable speed of 35 miles per hour through Brooklyn’s predawn streets. Passing darkened pawnshops and storefront churches, I felt if we continued at this speed the entire way, I’d be fine.  Emboldened, I became chatty. Where did the brides come from? Where did they meet? How long have they been together?  My husband knew little more than I did about these details but indulged me where he could.

There were several contenders for my husband’s affection before the arrow stopped on me. Dutifully, I made each an obsession.  Take Meredith, for example. Closer in age to my husband and similar in temperament, she exuded the sort of kindness that pain engenders: It had mass, it drew others in. There was an openness in her orientation, a raw, almost psychic sensitivity for the emotional states of those around her. With uncanny precision, she could recall the ever-shifting details of your personal life, and with every holiday, she yielded an abundant harvest of gifts. Had she not made such a formidable rival, I would have liked to have been her friend.

The Holland Tunnel was clearly going to be a problem. Approaching 100 feet at its deepest point, and spanning the length of almost twenty-six football fields, it’s by no means the deepest nor the longest, but for even the mildest amaxophobe, it’s a tunnel that represents a tempting provocation to nature.  As we descended into the artificially lit depths, deep into the bedrock of the Hudson River, I felt the first hiccups of panic set in.

In truth, Meredith was exhausting. But she was pretty. Companionable and unobtrusive, her features provided, like a stock image of a distant, lamp-lit cottage, a comfortable place to rest the eye (accompanied by a growing desire to undress before the hearth). I would imagine her through the eyes of my husband, suddenly betrayed by the plump, wet sexuality of her lips, the ardent, symmetrical points of her eyes, and the previously soft, palliative quality of her face would turn into an insult, like mist on uprooted vegetables. Through the purview of possible, imminent loss, Meredith’s congenial demeanor, her eyes half-closed in laughter, would seem suddenly contrived.  Her openness was not a state brought about through an impressive and erosive history of suffering, but a very ordinary invitation to fuck.

Or there was Anna, though with Anna it would have been a much stormier affair. For beneath her near-expert veneer of civility and social grace skulked something irrational, murderous, a thing that was only allowed to seep out in the strained confines of her intimate relationships. My husband would not suspect this about her at first, for he would be too thickly beguiled by her quick and darkly comic wit, and even more so by the firm, convex swelling of her breasts beneath her blouse, to which the silk—cool, supple, and pliant when it brushed his skin—luxuriously clung. Yet underlying the smoky, clichéd sting of French perfume, and wafting up from the breach made by her blouse and collarbone was something slightly repugnant, disorienting: the musky odor of an animal trapped. Unlike his marriage to Meredith, my husband would not have been happy with Anna, though he would, in the intensely private way a dying person might take to his or her illness, derive a vexing pleasure from their union, a costly, indulgent satisfaction that demanded nothing less than all.

Now fully immersed in the tunnel, the fear firmly took hold. I grabbed onto my knees, straining to control my breathing, but the air caught in my chest and became sickeningly light, too thin to expel.  Cars flanked us on either side, swaying menacingly close and then slipping away to vanish around a curve, the thick roar of their engines reverberating through the tunnel. Please don’t see me, please don’t see me, I thought, for should my husband glance over and find me hunched in two, clutching the door and hyperventilating, he could become distracted from the narrow, winding road and bam!—no wedding, no future, no light.

But he chose me, didn’t he? And I said yes, when I could have said no.

At long last, the tunnel opened and lifted us into the gray dawn light.  The tollbooths of New Jersey had never looked so beautiful as we drove on to celebrate two people in love.

I was not an accident in my husband’s expansive trajectory of love (nor was he in mine), but an aim, distinguishable, a subject in the formless.  This mystified wreckage of disjointed parts became in each others’ eyes somehow beautiful in their disarray, like that photographer who makes the scrapes of paint and glittering metal on the highway look as if they were put there on purpose, the result of a choice, and not evidence of what happens when two people collide and move together into an uncertain future.

NEXT UP
Culture
The Madonna Biopic Is Being Scrapped
Entertainment
Chloe's "Pray It Away" & 9 Other New Songs Out This Week
Entertainment
Harry Styles Is Performing At The 2023 Grammys
Entertainment
Samia On 'Honey' & Saying The Ugly Part Out Loud
Style + Culture, delivered straight to your inbox.