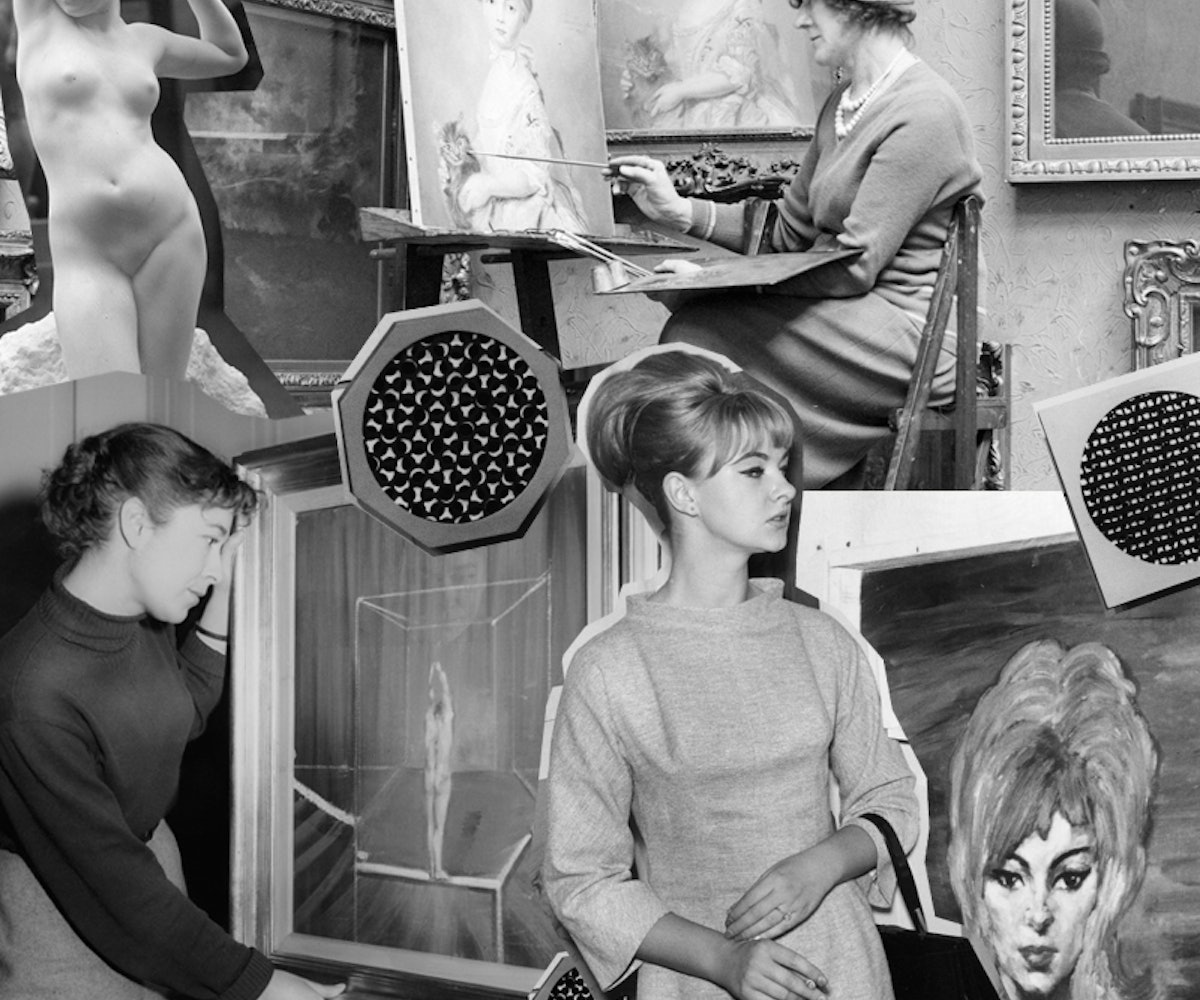 In 2011, Mindy Kaling wrote a piece in the New Yorker about fake female movie personas. One of them was "The Woman Who Works in an Art Gallery." "How many freakin’ art galleries are out there?" she wrote. "Are people buying visual art on a daily basis? This posh/smart/classy profession is a favorite in movies."

Kaling was referring to the so-called "gallery girl," or the more derogatory "gallerina," young women who work as assistants in art galleries, in the hopes that one day they'll achieve some level of success. But what would that success look like, and if you were Mindy Kaling, what would you call it?

Well, if Kaling was referring to one of the following five women, she'd probably write: "The Woman Who Owns an Art Gallery."

Where did you go to school? UCLA

How did your career get started? I quit my gallery assistant job and partnered with Davida [Nemeroff (left)] to run Night Gallery at 25.

Professionally, where were you five years ago? I had just partnered with Davida and was still making drawings for Karl Haendel on the side.

What is the biggest challenge of running your own gallery? Making sure you stay interesting and cover your overhead as you continue to expand.

What are you most proud of so far in terms of your career? All the artists and staff we support through our combined efforts.

If you could have an exhibition of any artist’s work in all of history, who would it be? Caravaggio.

Who is your art hero? David Zwirner and Davida.

What is the biggest problem with the art world today? The impossibility of being in the middle. It seems like you can only be successful on the emerging level or the blue chip level. It's very hard to be in between for both artists and galleries.

What advice would you give someone looking to follow in your footsteps? Surround yourself with good people and don't expect to make a lot of money!

Where did you go to school? Central Saint Martins

How did your career get started? Accidentally. I wanted to continue conversations I was having at university, and so I opened a DIY space after graduating and it evolved, becoming a gallery that represented artists in late 2014.

Professionally, where were you five years ago? I was a recent graduate and illegal poker room waitress.

What is the biggest challenge of running your own gallery? Maintaining constant affective labor on and offline.

If you could have an exhibition of any artist’s work in all of history, who would it be? Ana Mendieta.

Who is your art hero? This is hard—so many! Mendieta, all the artists I work with of course (Amalia Ulman, Harry Sanderson, Maja Cule, Jesse Darling, Ann Hirsch, Hannah Black Hannah Quinlan & Rosie Hastings, Phoebe Collings-James), Emma Talbot (my old tutor), Sharon Hayes, Penny Goring, Rita Keegan, and the list could go on and on.

What is the biggest problem with the art world today? I guess all the problems in the art world could fall under the rubric of the fact that power is held in the hands of the few, and not only is there resistance in its redistribution but further, there is resistance to the desires to shatter the formation of power itself. What advice would you give someone looking to follow in your footsteps? Well, I didn't pay much rent to live is how I set up and ran a space. I first moved home to my mother's for a year, then basically squatted for a year, then I lived with my partner who had to pay more rent than me. That's kind of gross advice, but it's really true and practical. Running a space drains money, and living in a city like London is near impossible as it is—you have to find the cracks which are your privileges in order to exist.

How did your career get started? I found my first gallery job on NYFA.org

Professionally, where were you five years ago? Working for Gavin Brown’s enterprise.

What is the biggest challenge of running your own gallery? Finding time to be proactive, not always reactive.

What are you most proud of so far in terms of your career? The trust I’ve been able to build with my audience and peers.

If you could have an exhibition of any artist’s work in all of history, who would it be? Alighiero e Boetti

What is the biggest problem with the art world today? Short-sightedness.

What advice would you give someone looking to follow in your footsteps? This job is less glamorous than it may appear, but when you love this job, there are endless rewards and infinite moments to learn and expand one’s worldview.

Where did you go to school? Washington University in St. Louis

How did your career get started? I have been working in some capacity of the art world since I graduated from college, starting with an internship in the Contemporary Art Department at Christie’s. I worked at a great gallery in Chelsea called D’Amelio Terras which closed several years ago. There I learned a lot about how a gallery works and started forming relationships with artists and collectors and curating shows.

Professionally, where were you five years ago? I started my gallery eight years ago, so five years ago, I was almost three years in and looking back at the exhibitions, the gallery was starting to fall into stride. I had a smaller space on Orchard Street, and I think I was hosting some good exhibitions. I was also probably still sitting at the gallery by myself or with one part-time employee. A couple years later, I had enough success that I was able to move into a much larger space that is much more fun for the artists to show in and have a couple of employees to help out.

What is the biggest challenge of running your own gallery? The commerce of it can, of course, be challenging at times. There are certain artworks and artists that sell easily and others who deserve to be widely collected, and it doesn’t come so easily. I am committed to continuing to promote the artists that I believe are smart and making great work, and I believe it will all level out in the end. Running a well-oiled gallery is a very long pursuit that takes many, many years to achieve and it takes a lot of work to keep it strong.

What are you most proud of so far in terms of your career? I’m proud that I’ve overcome a lot of work and life challenges and shown a commitment to making a strong gallery and building something.

If you could have an exhibition of any artist’s work in all of history, who would it be? Well, the most moving exhibition I’ve seen in the last couple of years was "Louise Bourgeois. Structures of Existence: The Cells" which I saw while visiting Leonhard Hurzlmeier, an artist I work with, last summer at the Haus Der Kunst in Munich. This traveling exhibition was the largest showing of Bourgeois Cells which are very large structures that have both beautiful formal and architectural qualities as well as being hugely psychological and emotional. The work is so tough and vulnerable and weird at the same time—that is pretty much what good art is.

What is the biggest problem with the art world today? I think there are great exhibitions in museums and galleries and artists making great work. I prefer to focus on the positive.

What advice would you give someone looking to follow in your footsteps? Put on good shows with good artists and remember to figure out how a business works.