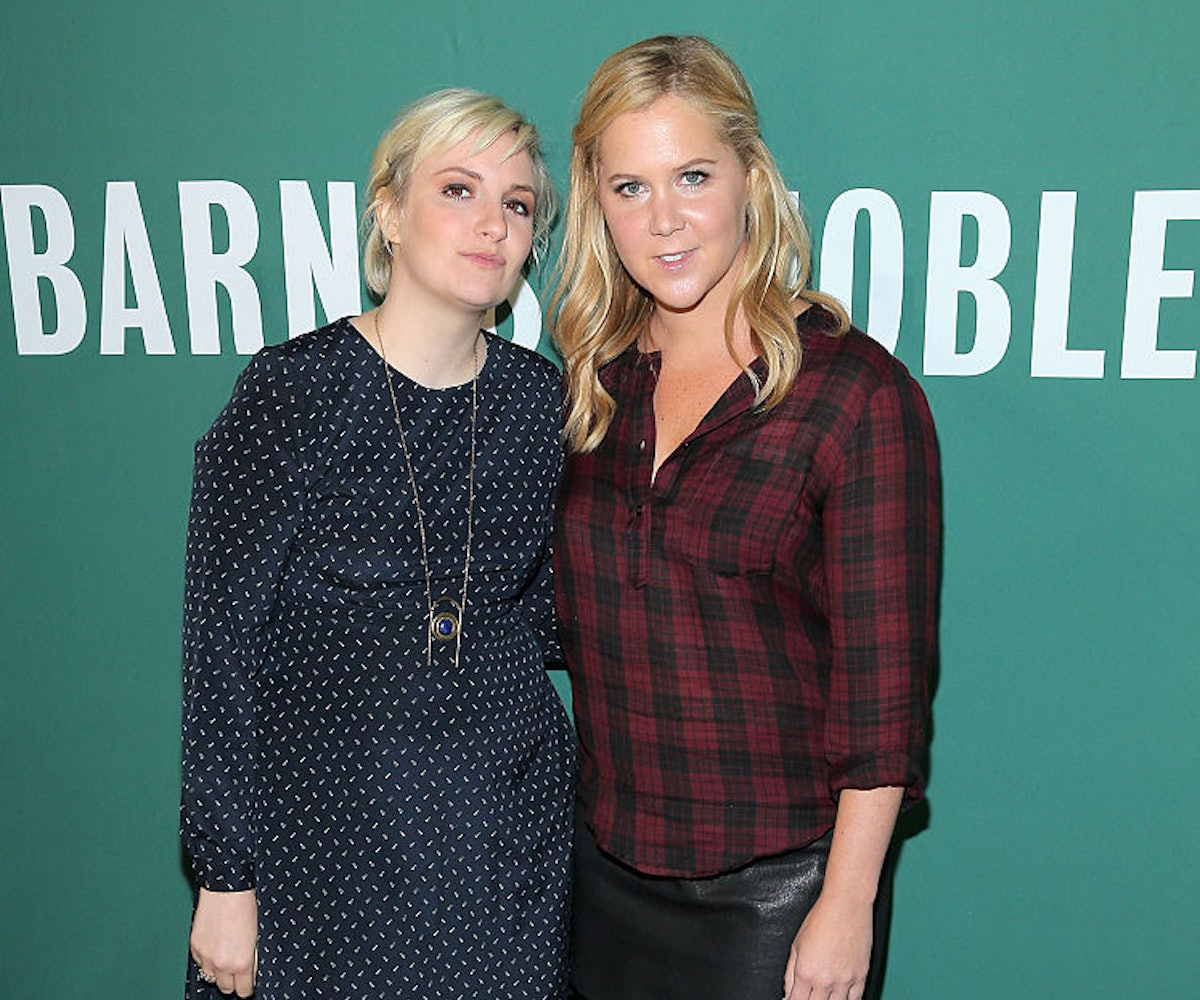 That the internet can be an outrage machine—with social media being the grease that keeps it running fast—is a pretty well-known trope at this point. Every day brings a new thing at which people take offense. There's no reliable way to determine just what will incite the public toward rage; some days it's the fact that a television show isn't "feminist" enough, other days it's the fact that an athlete is exercising his First Amendment rights during the playing of the national anthem.

But while the inciting incident might not always be predictable, there's no doubt that some people are targets for a very specific type of rage, one that veers away from being issue-based and into the range of personal affront. Such is the case with Lena Dunham and Amy Schumer, two celebrities who have—if not singularly, at least rather emphatically—managed to be frequently on both ends of the outrage machine, which is to say they're both inciters for and targets of people taking offense.

In recent weeks, Dunham and Schumer have faced the ire of the internet for several different incidents. Schumer had to answer questions about why she was blocking Twitter users who were questioning her commitment to employing comedian and self-described "rape apologist" Kurt Metzger as a writer on her show, Inside Amy Schumer. Dunham got called out for comments she made about Odell Beckham Jr. in an interview with Schumer (oh, what a small world celebrity is), in which she ascribed derogatory thoughts and feelings to Beckham based on her own insecurities and pretty obvious racial insensitivities.

Both Dunham and Schumer have since explained and, in Dunham's case, apologized for their actions, and because the life of a story on the internet is nothing if not mercifully short, people's attentions have since moved elsewhere. But the intensity of the ire that these two provoke, particularly when weighed against the fact that both have been previously—and frequently—lauded as feminist heroes, is worth paying attention to. If only because the willingness, even eagerness, to expect perfection from those who were placed on their pedestals by the same people who then seek to tear them down is a telling symptom of a larger cultural problem, namely, the desire to see our heroes behave exactly as we want them to behave; exactly, perhaps, as we see ourselves behaving, or, anyway, would like to think we behave.

Last year, Jia Tolentino wrote about the feminist media rage factory in a piece on Jezebel titled “No Offense." In it, she described the feeling of what happens when she has a run-in with someone who offends her, which then leads to those first hot spikes of indignation:

I felt the offense mechanism kick in: the everyday occurrence of seeing something bad, plus the added condition of taking it personally. Fuck that guy! I thought... I felt directly involved, which is a sensation that appeals to people in a way I don’t connect with. I don’t like the hit of that feeling, the self-enlargement, the heat.

Tolentino might not like to take offense, but there's pretty clear evidence that many people on the internet not only like it but seek it out. Feeling offended is a vindication of sorts, that what you are is right and that what the world is—or, at least, the person offending you is—is wrong. That's why this type of laser focus on the foibles of other people and the joy so many people have with pointing out every mistake others make is a protection of sorts; it allows people to feel that they would never make bad decisions.

I suppose it makes sense, in a way, that the internet is home to this type of binary thinking, computers run on this kind of essentialist language. And it can be relaxing in its way. It's nice to think that you are always right by virtue of simply being consistent with what you think is right and wrong; this is easy, your thoughts are your own. But it's also incredibly limiting; it's a Trump-ian mode of thought, i.e. my intentions are always good, and so because I think and act in a certain way, that way is right; because someone thinks or acts differently than me, they are wrong.

As Tolentino points out at the end of "No Offense," what happens when "we prune our personal stances into intricate dioramas" is that we risk "going out of [our] way to justify whatever [we] find personally pleasing, acting in extreme self-interest under the rough cloak of social good." This can lead to the elevation of feminist "heroes" like Dunham and Schumer; since those two share what we know to be feminist-approved stances on issues like ageism and body acceptance, they must be perfect in every way! Then, inevitably, comes the fall. And what falls Dunham and Schumer have had recently; they were easily as notable as their rises.

This is not to say that it isn't important to identify when people who have prominent platforms do or say things that are harmful, but if those same people had not been elevated to a place of idolatry simply because they were marked as being philosophically similar to what, for example, current mainstream feminist thought views as desirable in the first place, then perhaps that outrage could be replaced with nuanced criticism, and there could be a movement toward understanding things in a holistic, rather than a compartmentalized, way.

The real lesson, then, of the many gaffes of celebrities like Dunham and Schumer, is not that they ought to be devalued as feminist heroes, but rather that they should never have been placed in that position in the first place—no one should. While both praise and offense can seem like collective action, they are ultimately about personal feelings. Praise is a validation of the thoughts we hold as integral to the way we view ourselves, while rage is the product of feeling that those principals we assume we shared with our heroes have been betrayed.

But these feelings spring from self-created mythologies, and as with all the stories we tell ourselves, the conception of a feminist hero is littered with inconsistencies and inaccuracies, no matter how much we'd like to think otherwise. The only thing to do then is what all writers need to do with their work: Seek out the weak spots, identify the logical flaws, and kill their darlings—feminist and otherwise.