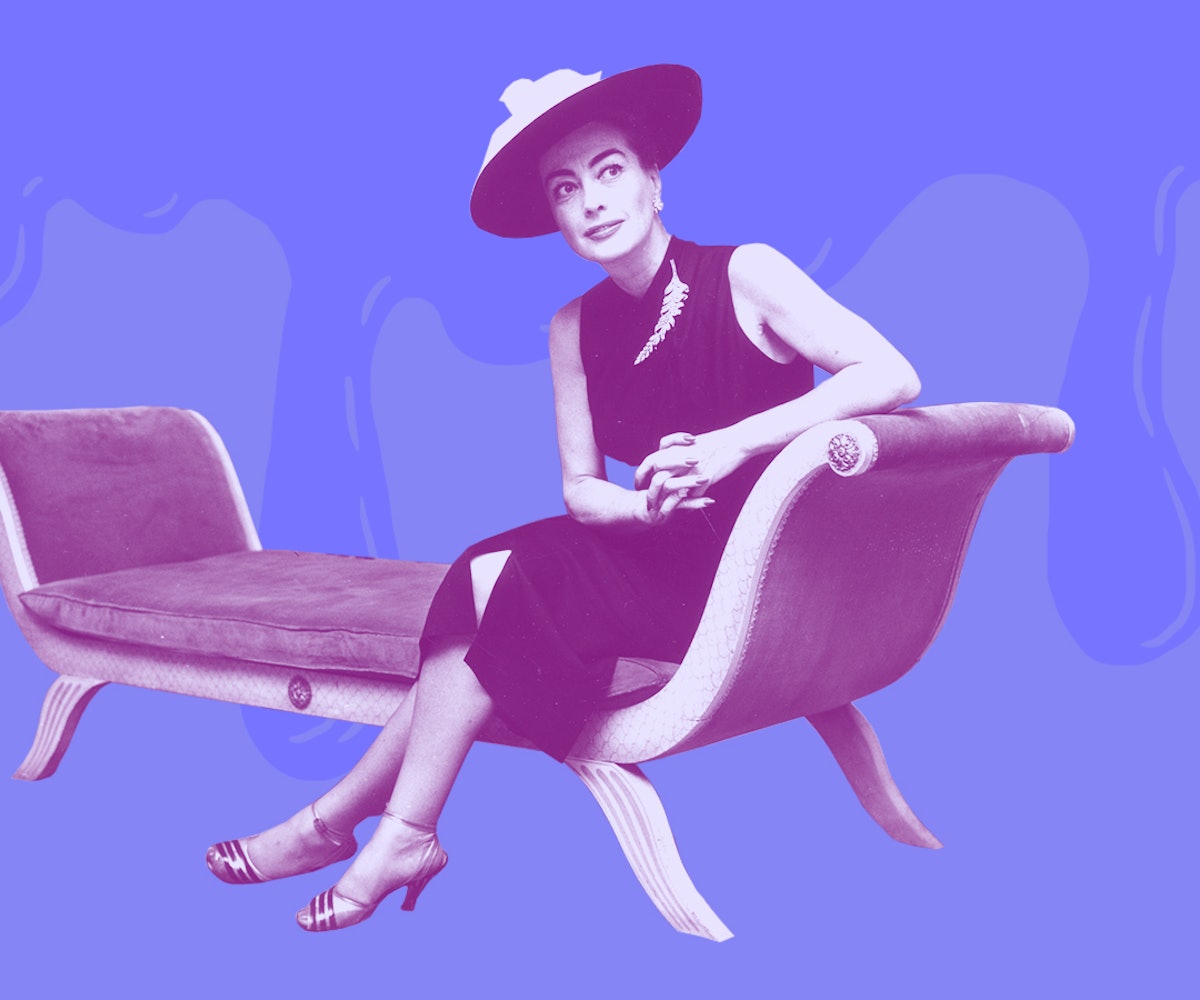 Joan Crawford’s reputation was badly damaged and altered by the publication of her adopted daughter Christina’s memoir Mommie Dearest in 1978, and this damage was compounded when a film of that book starring Faye Dunaway was released in 1981. The third episode of Feud: Bette and Joan is also called "Mommie Dearest," and it is a very imaginative and at times questionable attempt to come to terms with Crawford as both mother and child while also dramatizing these roles in the life of Bette Davis.

Joan catches Bette’s daughter B.D. (Kiernan Shipka) teaching her docile adopted twins Cathy and Cindy how to smoke. “I’ll be speaking to your mother about this, miss,” Jessica Lange’s Joan says frostily, which is not the way this scene happens in B.D.’s own memoir My Mother’s Keeper. In that book Bette introduces Joan to her daughter and an elaborately condescending Joan outright orders B.D. to stay away from her twins. “I don’t want your influence to corrupt them,” Joan told B.D. before bestowing her habitual “bless you” and walking away. B.D. reported that her normally outspoken mother was struck “speechless” by Joan’s audacity.

Bette isn’t present for this scene with B.D. on Feud because the writers want to get Davis and Crawford together for a scene where they let their hair down. (“So, Crawfish, what do you say we toss back a few after work tonight?” asks Susan Sarandon’s Davis.) As Bette and Joan drink with each other, their conversation quickly turns to sex. Bette admits that she didn’t lose her virginity until her wedding night in her mid-twenties, and then Joan says that she lost her virginity at age 11, which shocks Bette. And then Bette is staggered when Joan makes the further confession that she lost her virginity to her stepfather. “We called him daddy Cassin,” Joan says. “But he wasn’t really my daddy. We weren’t blood relations, so it wasn’t incest.”

It is very important to provide some context for this revelation from Lange’s Crawford. The only book that carries this information about Joan and her stepfather is Lawrence J. Quirk’s Joan Crawford: The Essential Biography (2002). Quirk was a columnist who knew Crawford fairly well, and he wrote in his book that as an older woman she told him this story about daddy Cassin. So it might be true. But anyone who has read Quirk’s books will know that he published gossip and hearsay without blushing or qualification, and he was also a writer who would bend facts to fit his own point of view. (His shamelessly dishy 1990 biography of Davis bears this out as well as any other example of his work.) This disclosure about Crawford and her stepfather does somehow have the ring of truth—it would explain a lot of her later behavior. But because it comes only from Quirk, it should be taken with a grain of salt.

Lange plays this confession scene with sharp psychological insight. Her face glows with happiness when she mentions daddy Cassin’s name, and then her face looks very tough when she says, “I led him into it.” That is the way that Crawford herself presented this story to Quirk, for she wanted to feel like she had been in control of the situation, if only in retrospect. “You were just a child,” says Sarandon’s horrified Davis, and Sarandon does a slightly modern “but you were abused” reaction to Crawford’s story. If the real Bette had been told this highly sensitive information by Joan, how would she have reacted? That’s very difficult to imagine.

The one aspect of Crawford that Lange has trouble with is her obsessive-compulsive reliance on discipline and cleanliness, which is the area that Dunaway really exaggerated. Lange is a former hippie and a romantic and all over the place emotionally, and that doesn’t fit Crawford’s need for control. Crawford would have disapproved of the hippie Lange in 1970, whereas she said very admiring things on the record about the young Dunaway. But in the Mommie Dearest movie, Dunaway pledged herself so intensely to the dark side of Crawford that she ironically lost all control in the process of acting out Crawford’s controlling nature. And that’s why, in spite of lightning-like moments of inspiration and identification, Dunaway’s Crawford doesn’t do full justice to the original woman.

Yet Feud: Bette and Joan is in danger of moving too far in the opposite direction when it comes to Crawford as a mother. There is actually a scene in this episode where Lange’s Joan goes to an adoption agency and gets turned down for being too old, and this is played for pathos. You don’t have to believe everything that Christina Crawford wrote in Mommie Dearest to feel that a scene where we’re supposed to feel bad that Joan Crawford can’t adopt some more children is pretty crazy. There comes a point when sympathy for a very flawed human being can be stretched to the breaking point.

Sarandon is on far firmer ground in this episode, especially when she lets us see how ambivalent Bette was about her own stage mother with just a sideways look from her eyes and a verbal hesitation. This is good Bette Davis eye work from Sarandon here, but she moves her eyes just a little too much when they are recreating the last scene from What Ever Happened to Baby Jane? on the beach. When Davis moved her eyes, it was always for a clear reason. (In fact, you might criticize Davis sometimes for being too obvious with her eye movements.)

Sarandon captures Bette the person fairly well, but Bette the actress is still a tougher assignment for her. And this is especially apparent because Lange’s Crawford is humiliated when their director Robert Aldrich (Alfred Molina) says that Davis has taken 20 years off of her face in the last scene of Baby Jane through sheer acting talent. Aldrich’s pointed remark comes after we have seen a drunken Crawford ruining this scene by trying to look younger and younger every time she comes back from her trailer.

There are some cute wish fulfillment fantasy scenes in this episode where Bette gets friendly with gay character actor Victor Buono (Dominic Burgess), and there is even a section where Buono gets arrested for having sex with a guy and Bette bails him out of jail. This is all very unlikely, but Burgess is like an adorable Muppet version of Buono, and fantasies like this can be fun and suggestive and tantalizing—as long as you don’t entirely lose sight of the reality of the lives you are trying to depict.