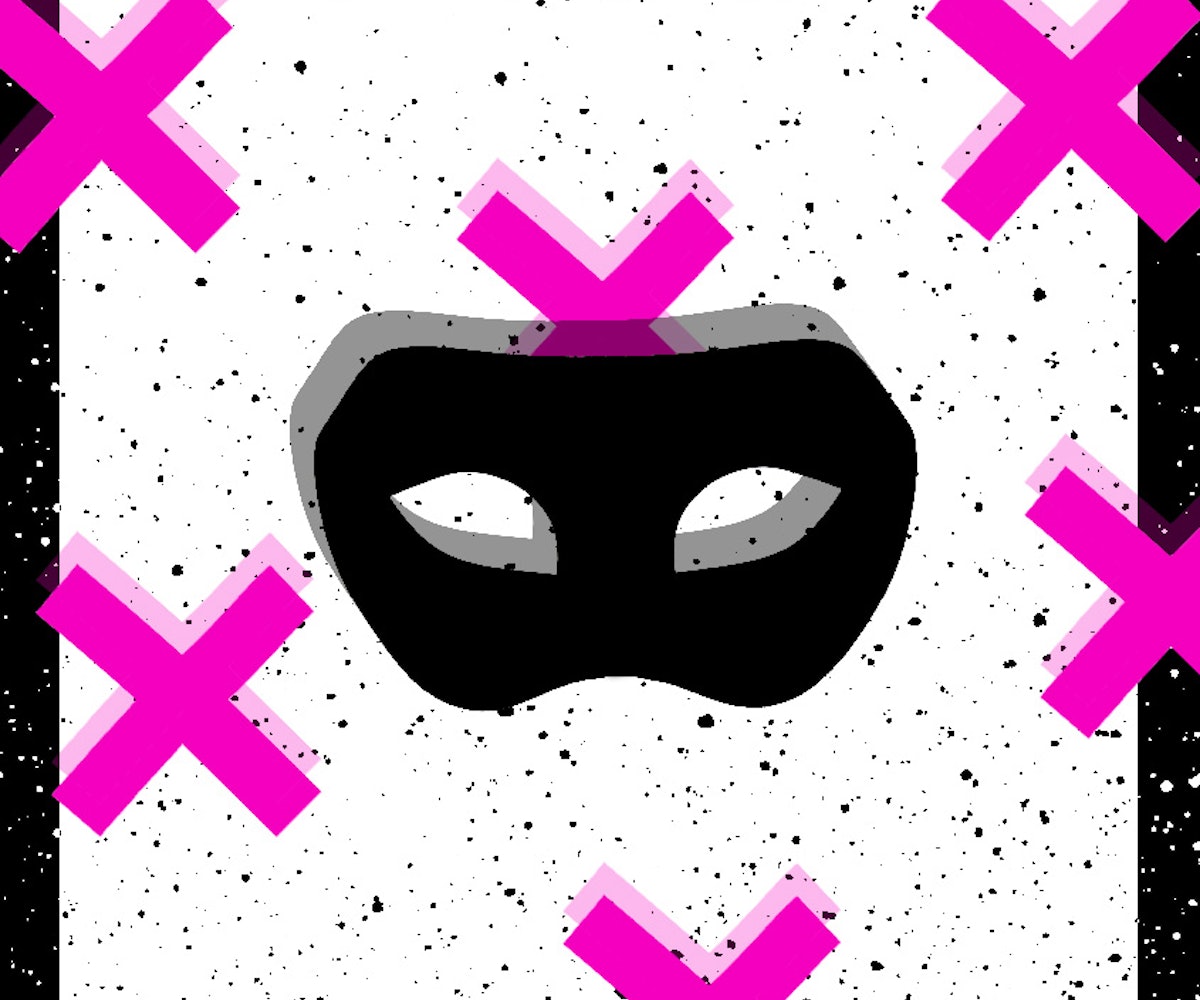 The first time I had ever attended a sex party I had to ask a friend to be my date. This particular party, which I been invited to, was to be hosted by a friend of Kate Middleton's (seriously), meaning it was a) really exclusive and b) very fancy. That sort of prestige gave me a do-or-die attitude, but did not comfort my nerves. However, as a born-and-raised New Yorker, I find new experiences in my city hard to come by. This, however, was definitely unfamiliar territory, and I was intrigued.

I put it bluntly: “Would you go to a sex party with me?”

“Why not?” He replied, in an unwavering voice.

This was the sort of party you needed permission to attend, and I asked this friend in particular in case there was a screening process: He’s a professional male model, so in addition to being extremely attractive, I knew he could handle strange situations with poise.

The week leading up to the event, I tried to prepare myself mentally, physically, and emotionally. I read every sex party story I could find; I ate healthy, lifted, and did yoga. Still, no amount of preparation eased my anxiety about being naked and engaging in sexual activity in front of a bunch of strangers.

All the articles I read said to wear new lingerie to boost your confidence, which I did—but it just made me feel vulnerable. I knew my date felt the same.

Closing the door to the bustling streets, we signed confidentiality forms and assumed new identities. We got on the elevator, which quickly filled with electric, nervous tension as I struggled to hastily tie my date’s mask (oh, yeah—those were required). It’s difficult to tie on a masquerade mask in general, but doing so with shaking hands felt like it was a life or death situation.

The doors opened to a dimly lit but spacious penthouse. The $250 tickets naturally lured in an expensively dressed crowd. But while the party itself was meant to be exclusive, secretive, and for New York’s elite, it wasn’t a crowd of Christian Greys or leggy Victoria Secret types, and I was pleasantly surprised to find variety in age, shape, and size.

The party was structured to create a safe environment for women. There were strict rules that stated no man was allowed entry without a female date, and men were not allowed to approach women by themselves.

First off, coat check took away as much clothing as I would allow at that moment. I led my date over to the couches, trying not to trip in my heels.

There was a bar in the space, but while some people were getting tipsy, it didn't seem anyone was really relying on the alcohol for courage. With our own champagne, oysters, and crackers, we found the room was filling up slower than we would have liked. We had already seen enough butt grabbing to last a life time and were actually—actually—growing bored. At a sex party. In New York City.

Eventually, we stepped on to the small balcony and smoked cigarettes in a very House of Cards fashion. Wrapped in my date’s navy Topman suit jacket, I shivered alongside other couples who were also trying to relax. Finally, as my body temperature cooled down, so did my nerves. We began to talk to the people around us and discovered that people from all walks of life—who worked as consultants, fashion buyers, video producers, and hedge-fund heads—turned into free-spirited sexual beings once the night took hold.

To my surprise, upon speaking to the other couples, it was clear that the majority of them were also sex-party virgins. Many seemed more nervous than us. One woman even mentioned that she had a daughter who looked only slightly younger than me. She couldn’t have said much else to make me feel any more uncomfortable and out of place.

Everyone asked for the story of my date and me. In truth, we were only friends. But I quickly responded that we had been dating for six months, had previously worked together but never spoke, and met up on our separately planned trips in Melbourne, Australia. I almost gave him a high-five right then and there for not being fazed by the story that I had concocted on the fly.

One particular couple became our partners-in-crime. They were into kinkier sex than most of the other couples at the party, and I couldn’t help but feel a magnetic pull towards them. The man was mysterious and extremely attractive (from what the mask showed) and had laughed boisterously when we asked what kind of consulting he did. His date was the kind of person who could make even this awkward situation more comfortable. We quickly latched on to them and together, we entered the playroom.

The playroom was the designated space for sexual activity. There was an open doorway leading to it. It had a large white futon that somehow fit the majority of the 50 guests, while the rest were strewn about on five leather couches, the floor, and the walls.

First, we just awkwardly watched couples perform oral sex and provided commentary as if we were watching a sporting event. We were particularly fascinated with a man from Milan with a fashionably clean beard—wondering if he had a snorkel while he was orally pleasuring a young woman in Agent Provocateur lingerie.

But then our new friends decided to start moving things along (we were sober at this point, which was fine). The man from the other couple pulled out a short riding crop, which my my date ended up using on me (mostly because we didn’t know what else to do).

After enough bruises formed for that moment, I turned to check on the rest of the room to find that we were amidst a real life Bacchanale scene. Couples were on the bed in every position imaginable. Some were switching partners continuously. Others stuck to their dates. Lap dances by various couples on the same couch, bowls of condoms that were nearly empty (that was the only safe-sex supply I noticed), and couples engaging in various types of sexual activity covered every inch of the room, even the floor. A variety of sultry sounds filled my ears. Mountains of clothing covered whatever space was left. I was actually surprised we left with all our belongings intact.

I finally understood that in the playroom, nothing except the moment mattered. It was just you and whomever you were focusing on. You were only pulled out of it if a couple next to you broke through the sounds of moans and music. I remember laughing into my date’s mouth in the middle of a heated make-out session while straddling him with only my lingerie left covering me when I heard our partners in crime discussing whether or not to take a cigarette break while still in the middle of some aggressive doggy style. They said it so casually despite the situation.

When it was over, we finished our cigarettes and proceeded to the exit. While my date helped me with my coat, I asked one of the staff members his thoughts on the whole soiree.

“It’s a beautiful thing” he said. “It’s a lot of people just being happy and enjoying life.”

We stepped back out into the street—the sidewalk was the same as I’d left it, but I felt different. It was thrilling to think that people walking by had no idea what we just experienced. If this was how New York’s elite played, then I was game for the next play date. But as I walked home, I realized that “elite sex party” didn’t really describe what it was. It was more like well-organized mutual enjoyment of life’s more exotic pleasures—and that is something anyone can get into, “elite” or not.