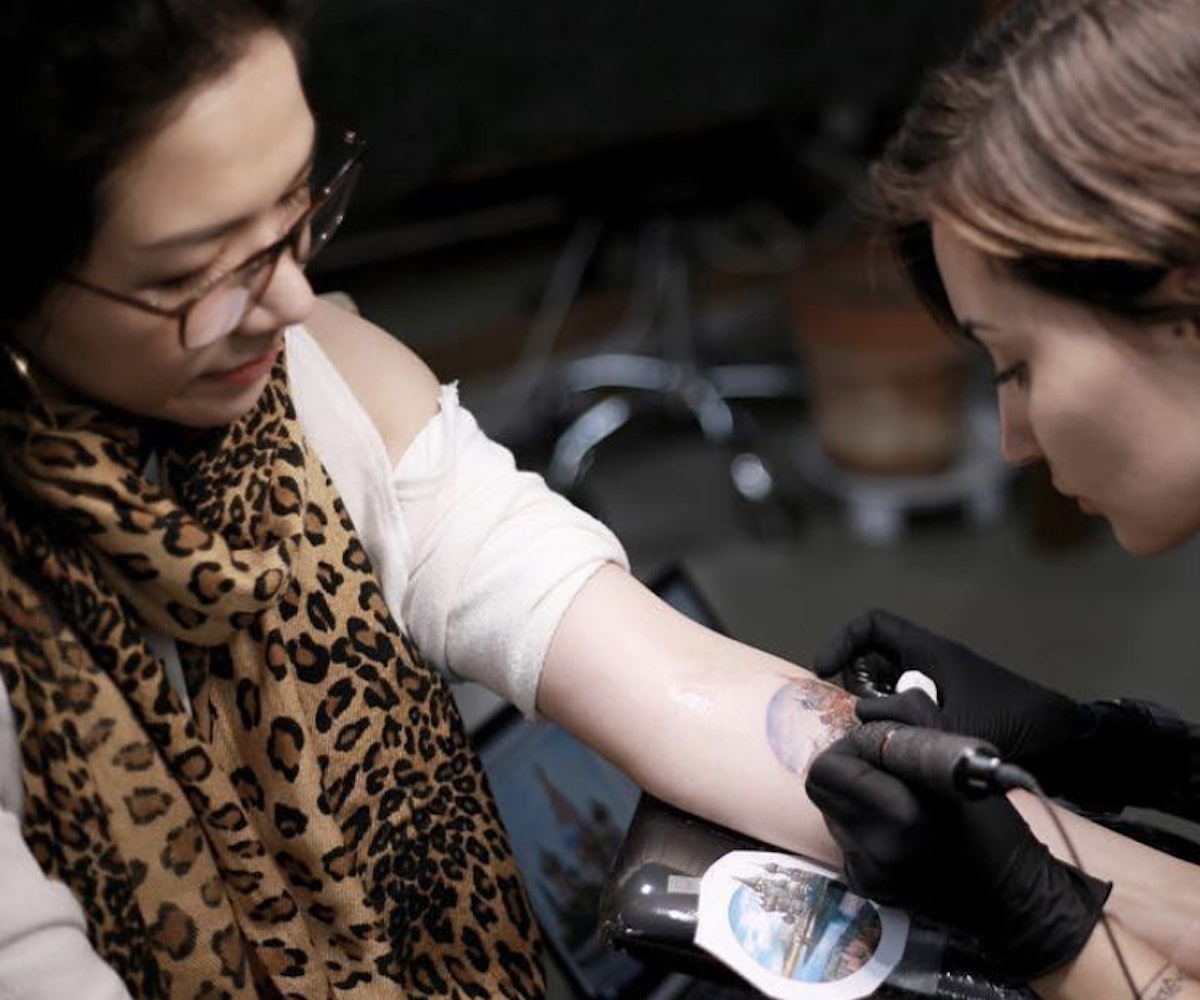 “Tattooing is an ancient feminine art," says Ash Glynn, founder of Soul Tattoos, citing the ancient Egyptian priestesses who were among the first tattoo artists. She explains, "It only became masculine in our modern age."

It might feel strange to think of tattooing as being gendered, because so many women have tattoos. Yet parlors are often intimidating, male-dominated spaces, which can make getting a first tattoo an uncomfortable experience for lots of women. Of course, not all tattoo shops—or the men in them—are terrifying, but when it comes to putting permanent art on your skin, it's important to feel control over your own body and be unafraid to express exactly what you want. And this is something that can be easier to feel with a woman tattoo artist—specifically, one of the following five, whose work we adore and who are overturning tattoo stereotypes with their art-focused, delicate designs, raw talent, and desire to create a welcoming environment for their clients.

Learn more about them, below.

After attending art school, New Yorker Rosa Perr spontaneously started tattooing while on a California road trip, and years later she still doesn’t work out of a parlor or even a storefront, preferring a more intimate environment. Perr is a self-proclaimed feminist tattoo artist, known for her tiny, delicate stick and poke designs, lovingly tattooed in the comfort of her Park Slope apartment. “It’s a vulnerable thing to be getting this thing on you forever…” she says. “Why shouldn’t your tattoo experience be warm and comfortable, where you feel connected to the person giving you a tattoo?”

Eva Karabudak never thought she’d work at the iconic Bang Bang Tattoo studio in New York, but it's now the parlor the Turkish-born artist calls home. Though Karabudak only started tattooing professionally in 2011, her early cross-stitch tattoos already gained worldwide attention. She’s since amassed over 500k Instagram admirers of her miniature, illustrative tattoos. Karabudak studied art in Ankara and paints in her free time, so it’s no surprise that she’s able to recreate famous artworks and custom landscape designs so realistically, thus giving her clients a piece of permanent art on their skin that they can cherish forever.

The idea behind "soul tattoos" came to Ash Glynn, aka Wadulisi Woman, while she was working as a tarot reader and florist in New York City. Now she’s a licensed tattoo artist, certified Reiki healer, and seeress based in San Francisco, where she practices an intimate form of tattooing that blends her psychic gifts and connection to her spirituality with tattooing. Each session involves meditation and energy work, in which Glynn scans her client’s aura for blocks or things they may need to release. All the while symbols like totem animals or flowers come to her in intuitive design and she’s guided on where best to place the tattoo for healing purposes. Each resulting piece is completely one-of-a-kind, and the energetic experience typically lasts three to four hours.

While you might recognize Jes Dwyer's work from Lena Dunham’s Instagram, her intricate detail and gorgeous colorwork speak for themselves. She operates out of Nice Tattoo Parlor in Carroll Gardens, Brooklyn, a space she co-founded with Robert Boyle. It’s “the tattoo parlor where everybody is nice to you” and is staffed by an all-female team of talented artists, though this wasn’t totally intentional. However, Dwyer stands behind the choice, telling The New York Times, it leads to a space with “no egos, no intimidation." And considering that, as of 2012, more women in the U.S. have tattoos than men, it's about time the percentage of female tattoo artists reflected that dynamic.

Tatiana Kartomten, more widely known as Tati Compton, is a California native and self-taught stick and poke tattoo artist. Compton currently works out of Saved Tattoo in L.A.’s Arts District; it's a space opened by legendary tattoo artist Scott Campbell, who co-owns a shop in Brooklyn of the same name. Compton’s body of work is easily recognizable, and her mystical female nudes and celestial bodies are world-renowned. Her first book, called TATI, contains over 800 of her witchy and whimsical intricate designs.