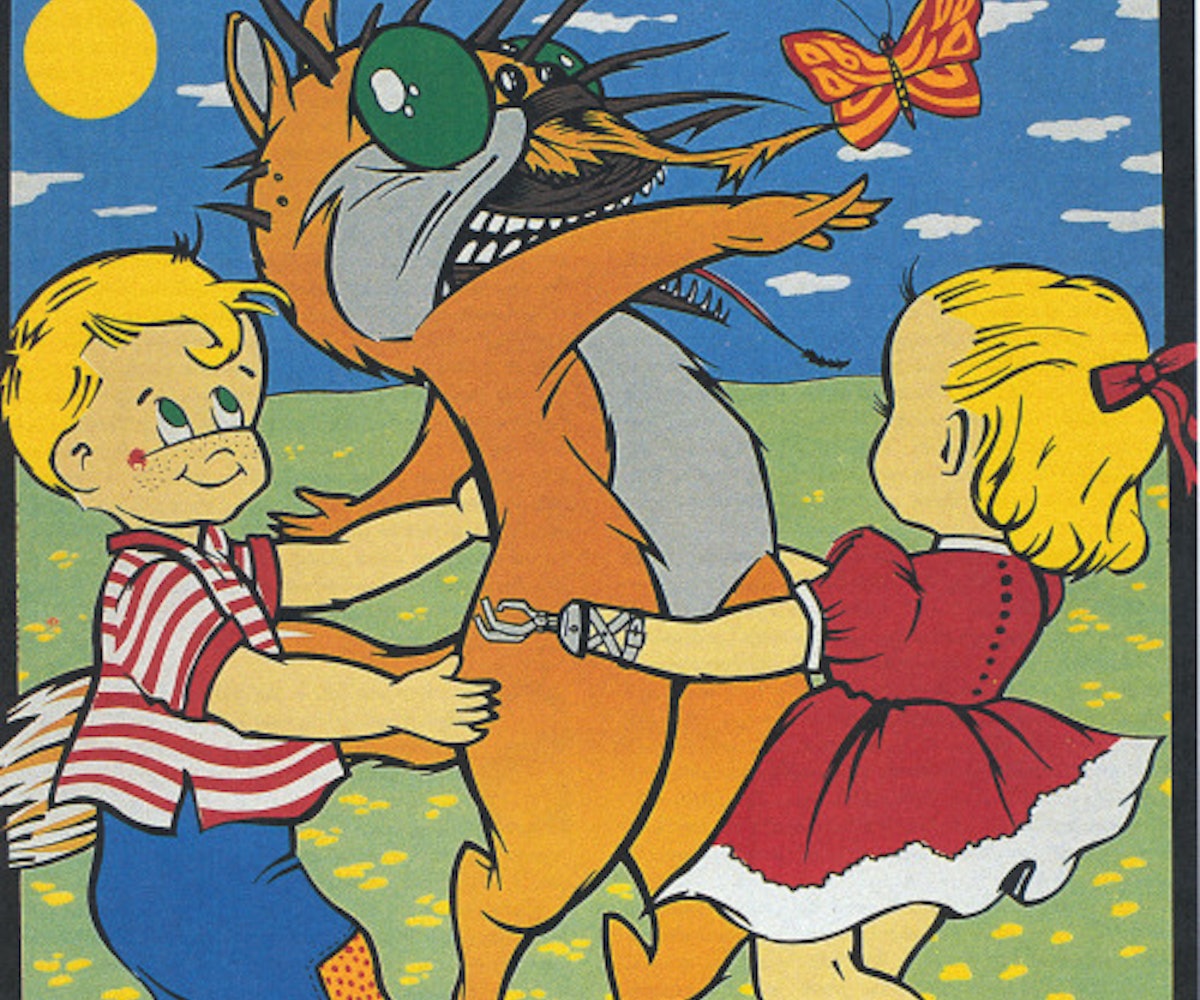 Frank Kozik has two rules for making band posters: no puns and no photos of the band, "unless they absolutely insist." In case you're not familiar, Kozik is the genius behind some of the most memorable band posters of the '90s. His time in Austin, Texas, led to gigs with Sonic Youth, Nirvana, Nine Inch Nails, and more. Kozik's collage aesthetic combined with hand-drawn cartoons worked to extend the identity of the bands he worked with into spaces you wouldn't necessarily expect. (That's thanks in part to his rules.)

Now, Kozik's expanded his oeuvre beyond poster making and into the limited-edition art toy world, where he acts as chief creative officer for Kidrobot, an appropriate medium considering Kidrobot's cult status among artists, art lovers, and collectors, plus folks bent on simply owning the best of the best. Like Kozik's posters, the work he's done with Kidrobot occupies a special place within collectors' minds.

The dawn of computer-generated posters hasn't killed off the medium just yet, though. Kozik still lends his vision to bands like blink-182 and events like Lollapalooza. "This enormous renaissance in the art of the poster kicked off around '91, '92, and continues to this day," he tells us. "It's a huge, huge specialized scene." Like all things '90s, though, the era of poster making will never be quite the same. Let's look back at some of Kozik's most famous works to see just how far we've come.

"This was, I believe, their first national tour. They played to about—oh god, there was less than 30 people at the show. The image is from a Russ Meyer film. I had a book of stuff from the film and I had listened to their music, and I was like, ‘Okay, this is psychedelic music, I think, right? Kind of.’ At that point, nobody in the punk scene was doing anything that had a psychedelic influence to it. When people saw this, they thought it was really interesting because it's got a gritty Xeroxed punk vibe, but then there’s weird psychedelic sex symbol on it. This is the poster that actually got me a whole string of gigs because they really liked it. This basically is a collage; I drew it, drew on it, did a simple separation, then took it to the printers, all by my hand. I was mixing different influences because I was a big fan of that, even though I was super into punk rock. I would try to make some sort of a connection with the band that wasn’t like an obvious pun on the name or a picture of a band."

"I was really excited here. I got called up by the Fillmore! It ended up kind of being a nightmare, though. They had this art director who was an unpleasant person. The Fillmore was still paying the original price of $150, but I was like, 'Okay, I’ll do this poster.' The art director came in and—like, they had way better typography—and she’s like, 'I’m the art director. I’m gonna change the typography.' So, this was not really how it was supposed to look, because it was heavily art directed and I got paid fuck all for it, but it was a chance to do a Fillmore poster, right? If you’re a poster artist, that’s kind of a veteran, the cap. And you know the imagery... it’s whatever. It’s Red Hot Chili Peppers, so it’s like sex and death, you know, whatever. It became a popular thing."

"This was the second silk-screen poster I ever did. That’s Jayne Mansfield ripping off her top. And, again, I was just playing with things I usually like looking at. I had fun with Manson. Mansfield’s a dark figure; she had a tragic death, she also flirted with the Church of Satan and all that kind of stuff. Again, this poster had nothing to do with the band. I just liked it. Helmet was really brutal, sort of suppressed homosexual jock band. So this was just me having fun with colors. This was just an exercise. I had it all done by hand, the old-fashioned way. "

"This Jimi Hendrix poster is a fine art print. In '92, I was dealing with an art gallery in San Francisco called Art Rock, and they licensed the Hendrix estate. I think this was for an anniversary or something. They had me do a large-format, silk-screen poster. I think we did 200. Really big. I printed it myself, again. After market, I saw it go for over five grand."

"I was not a big fan of the band, to be honest with you. I saw them play on two of their tours, I think. By the time Nirvana rolled around, I was more into way heavier, weirder, fucked up shit. I was into grindcore and metal stuff coming out of the U.K. and Japan. But a friend of mine, Tom Bunch, had turned me on to a million killer gigs. He owned the venue or was involved with this show, so I did it for his production company. So I’m thinking, 'Nirvana. You’re heaven. You see these children in the field. They’re dancing with God, but God’s a kind of a strange-looking creature.' I wouldn’t get paid for these kinds of posters. I would have an agreement with the band, the record company, or the venue. I would supply them with X amount of posters that they could use for promotion or giveaways. I was allowed to sell a signed and numbered run to recoup my consummated profit. I would do a lot of them—a poster a day. I mean, we cranked these out."

"This one was a little more serious. This was furthering my obsession at the time. You know, in the '90s, serial killers and stuff were really cool. It was a whole sort of thing in the end where it was all cool. So there she is, and there's what happened to her in the background. Nine Inch Nails is an extremely dark band. They loved this poster. This poster is also one of those that commands thousands when it comes up in the aftermarket."

"The Beastie Boys. They were anarchistic and fun. Bruce Lee was a good fit because he’s anarchistic and fun. Plus, the ugly-ass font and super-bright colors make a nice, strong image. It vibes with the feeling of the band. They’re pretty tongue-in-cheek. We all love Bruce Lee because it’s a little corny, even though he’s awesome. That was kind of my thinking on this one if I remember correctly."

"I didn’t really like the band. This was one of my first Photoshop posters ever, though. I just started doing computer stuff around '95, '96. I had a Mac system. I remember thinking, ‘Oh, let's use every filter.' You know, as we all did once? At the time, I was really obsessed with Rudi Gernreich, who was a '60s photographer-fashion guy, like Peggy Moffit. I was collecting really weird late '60s, early '70s photography annuals. I was really getting into it, visually. And so, the only connection the poster has with the Smashing Pumpkins is the orange. I hated the band, didn’t really know much about them; so this was just me tripping on myself again."