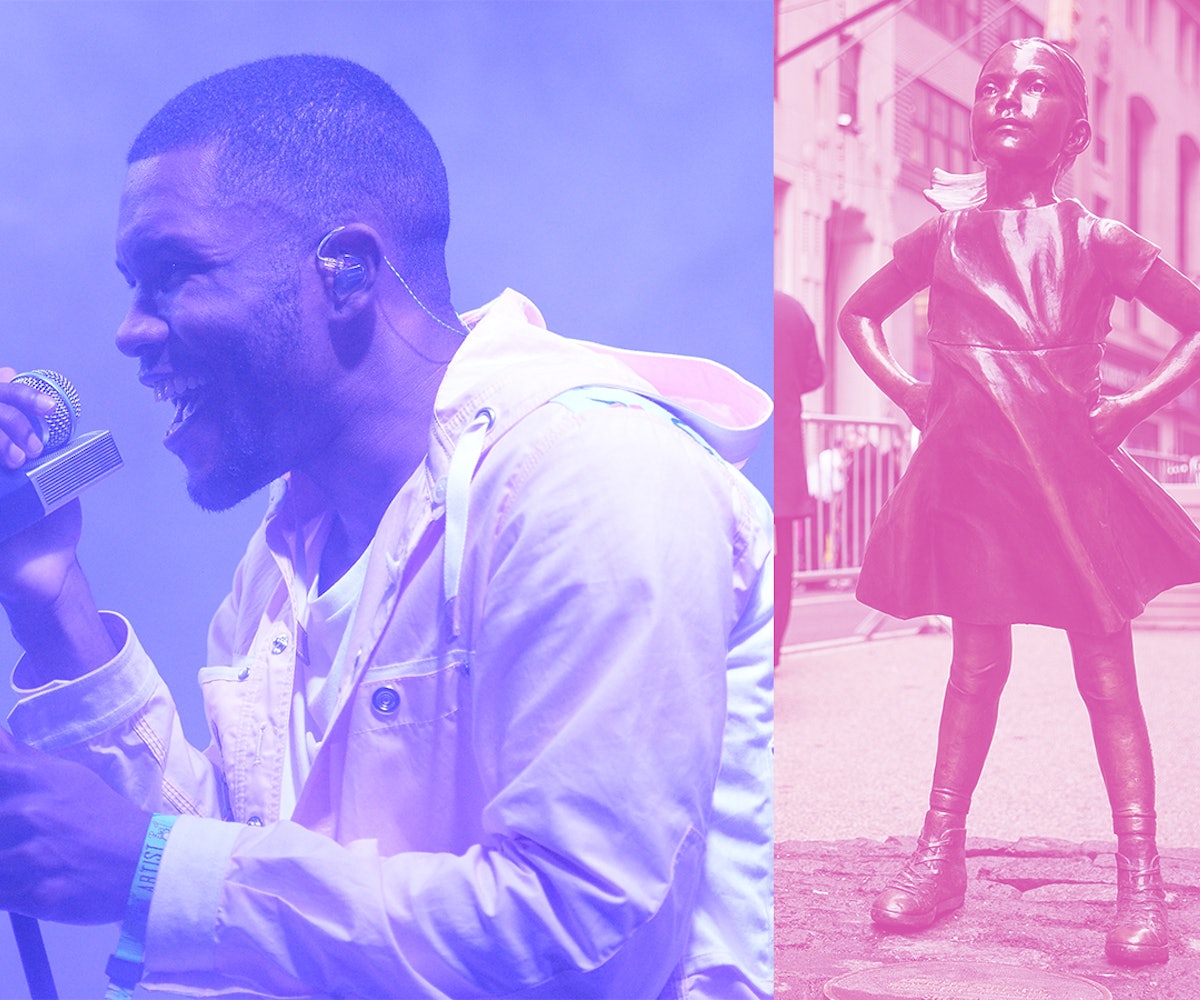 In 2011, Frank Ocean pissed off Don Henley with his debut mixtape, Nostalgia, ULTRA, by using Henley’s “Hotel California” as the backing track for his own “American Wedding.” Henley, and his record label Warner Brothers (who owned the master), threatened to sue Ocean if he ever performed the song live, on the grounds that their copyright was being infringed upon.

In 2017, a statue of a small girl pissed off a statue of a charging bull; more specifically, it pissed off Arturo Di Modica, the creator of "Charging Bull," by deigning to exist. Di Modica threatened to sue the team behind “Fearless Girl,” on the grounds that his copyright was being infringed upon. His reasoning was that the girl’s proximity to Di Modica’s work changed the meaning of his artwork.

Six years separate these two events, and, on the surface, they may not seem related, but they share similarities that sum up the complications surrounding our current state of artistic copyright and the direction in which we’re headed when it comes to ownership and art, including who that copyright law is actually protecting.

When it comes to art, a lot of copyright law feels incredibly archaic. People still believe that by mailing something to yourself you are protecting your intellectual property. This is what’s known as “Poor Man’s Copyright” and is, according to the UK Copyright Service, “next to worthless.” (And who even uses the mail these days?)

There’s evidence to suggest that art-related copyright laws have been in play as early as 1506 when printmaker Albrecht Durer lodged a complaint with one Marcantonio Raimondi for plagiarizing his woodcuts. Though there’s some conjecture as to the timeline, Dr. Christopher Witcombe, professor of art history at Sweet Briar College, suggests that the circumstances around Durer’s complaint meant that he had some sort of legal support.

However, Anglo-American copyright law for art dates back to the 1710 Copyright Act, known as the Statute of Anne, which essentially took the power of copyright ownership out of the hands of publishers and into the hands of authors for a fixed amount of years, after which the work would go into the public domain, free to use. This period of time was initially 14 years; now a copyrighted work lasts for the life of the author, plus 70 years.

Already we’re in a bit of a morass. Public domain? Statute? Woodcuts? What does this all mean? As Amanda Levendowski, clinical teaching fellow with the Technology Law & Policy Clinic at NYU Law and a founding fellow of  the Internet Law and Policy Foundry, explains to me, “copyright law doesn't protect ideas.” For example, this means that Instagram was well within its rights to copy Snapchat’s Stories feature because Instagram didn’t copy the underlying source code.

This also means that Ocean was on very sticky ground, legally speaking, with “American Wedding,” because he used and amended (improved?) the song’s master track—its own source code, if you like—rather than just covering it, which much to Prince’s lifelong chagrin, is fine to do. So there you have it! An easy mistake to make, slap on the wrist and don’t do it again. Case. Cuh-losed.

This is where the “Charging Bull” versus “Fearless Girl” debate is really interesting, both in terms of how similar it is to the Henley and Ocean debate, but also how different the two might end up. To clarify, Di Modica’s lawyer, Norman Siegel, was invoking something called “moral rights” under the Visual Artist Rights Act when challenging “Fearless Girl.” These “moral rights” protect “intangible elements” of an artist’s work, such as integrity and attribution. So because Di Modica thinks that the proximity and dialogue of the “Fearless Girl” deliberately and indefatigably alter the meaning of “Charging Bull”—which, without question, it does—he thinks his moral rights are being infringed.

However, in an interview with Artsy, Amy Adler, a professor of art law at New York University Law School, said, “Under moral rights in this country, while you can sue for someone actually physically changing a sculpture, changing a sculpture by placing another sculpture near it is simply not actionable.”

Adler goes on to say, “All public art is ideally in dialogue with the space it exists in. And that includes other sculptures.” Again, obviously, this is correct. If “Charging Bull” were to be installed in Pamplona, it’d have a different meaning entirely, given the context of that city and of that space. Similarly, if “Fearless Girl” were standing in front of another bull—like this one in my hometown of Builth Wells, Wales, and an altogether better bull IMHO—then it probably wouldn’t have the powerfully feminist associations it has on Wall Street.

It’s this notion of dialogue between public art and space that needs to be considered when looking at copyright in music. Whenever a music copyright case is in the news, there’s always some description of lawyers holding up chord charts and sheet music to try and prove similarities, as if pop songs were as clear-cut as text on a page. It all feels rather small and like it misses the point.

Songs, as much as statues, are pieces of public art, in dialogue with the world around them and the history that’s gone before them. “You’ll Never Walk Alone” has a different resonance when sung by thousands of Liverpool fans at a Liverpool game than it does when sung by Nettie Fowler in the musical Carousel, for example.

Sampling—whether a deliberate use of a backing track, or part of a backing track, or an accidental melodic lift, the kind that happen and go un-sued all the time—is the perfect example of this type of cultural dialogue. And, by the way, it’s not a new thing. In musical terms, sampling is no different to what’s been happening with folk music for hundreds of years—melodies borrowed, songs rewritten, arrangements tweaked and shifted and passed down the line. Going back to Adler briefly, in defending “Fearless Girl,” she said, “a policy that would allow one artist to stop another artist’s work would be a mistake.” This is sound and should be extended beyond public art, and across the board.

We are currently living in an age where all content is up for grabs, ready, if not always willing, to be taken, molded, parodied, spliced, reworked, recontextualized, repurposed, for almost any means. And so a statue originally meant to be a symbol of a city’s defiance in the face of economic hardship thus becomes a negative symbol of an unequal patriarchal society. Or a piece of lush, ostentatious, ‘70s guitar rock about drugs and excess (I mean, I think?) becomes an R&B beat about doomed love. Or maybe a close-up shot of a cartoon aardvark’s fist becomes a loaded piece of internet language.

If intellectual property in tech seems to allow for imitation well enough, why can’t the same reasoning be applied to art? Once something is out into the world, it takes on a life of its own, and any attempt to keep control of what that life may be, whether through litigation or otherwise, well, it’s like trying to close the stable door after the bull has bolted.

NEXT UP
Culture
A Britney Spears-Inspired Musical Is Coming To Broadway
Entertainment
RM's "Yun" & 9 Other New Songs Out This Week
Entertainment
Everything We Know About SZA's New Album
Entertainment
Caroline Polachek Announces Album ‘Desire, I Want To Turn Into You’