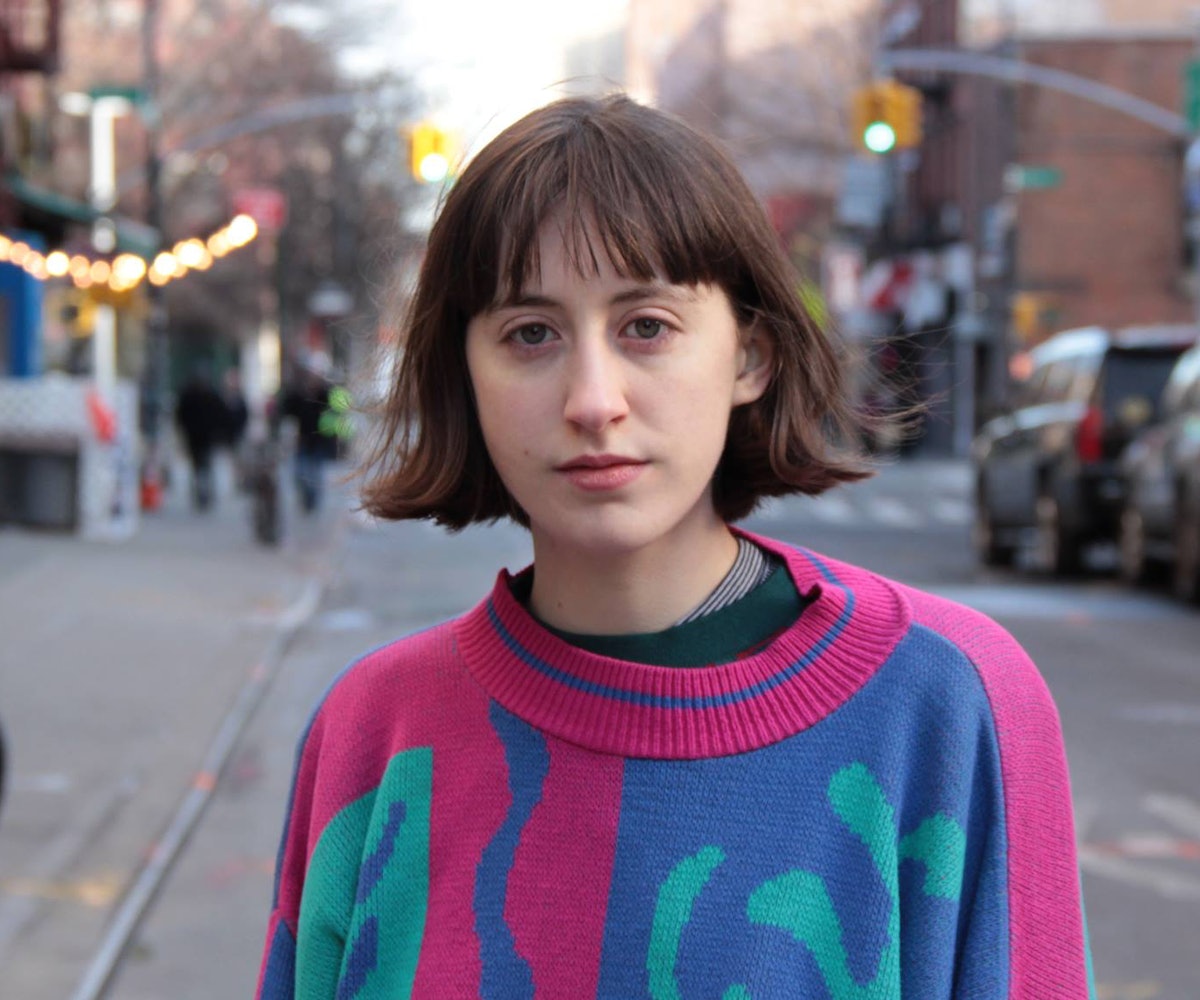 Seven years ago, Greta Kline posted her first song to the free music sharing service, Bandcamp. Kline’s work has changed since then, most notably switching from the stage name Ingrid Superstar to the name she’s now known for, Frankie Cosmos. While she began making the music alone in her bedroom, Kline’s process has greatly transformed, while still maintaining the sweet sound that has always been at the heart of her music.

On April 1, Frankie Cosmos released her first studio album, Next Thing. For the first time in her career, Kline played alongside other musicians—Aaron Maine, David Maine, Gabrielle Smith, and Hunter Davidsohn. Next Thing revisits old solo releases from Bandcamp, but with the collaborative power that Frankie Cosmos now holds, giving the songs more force. We spoke with Kline about her creative growth and the challenges of switching from a DIY ethos to working in the music industry.

You began sharing your music on Bandcamp about seven years ago. How has the Internet allowed your sound to expand?

The Internet gave me a way to view my music as a real thing. When I started doing it, the music felt like it was just for me, but when it was online and I could see that people were listening to it, through Bandcamp play count statistics, that gave me the motivation to record more nicely. I feel like it’s affected my recording quality, in small and large ways, over the years.

What made you first share your music on Bandcamp? Did you have friends who were doing it?

No, I wish I could remember which band it was that I can first remember seeing with a Bandcamp. I remember someone switching over from MySpace to Bandcamp, and I remember being like,

I liked that it presents music as a release and that you can download it. It was all very appealing, so I started using it pretty immediately after I found out what it was.

How has changing from interacting with fans online only to seeing fans at shows impacted your experience?

It’s definitely a really complicated thing. The fact that there are real people that are listening is amazing, but also really scary. I don’t want anything I say to have a negative effect on a young person, so that’s been a scary feeling. Mostly, it’s just really lovely to meet people when I’m on tour and have people that either feel like they know me or are just really excited. It can be really sweet to interact with those people and be at the show, play for them, talk to them, and get a glimpse into other people’s music scenes.

I noticed that David Blaine retweeted the link to your song in which you reference him. How does your relationship to music change as you begin to stray from DIY?

That was crazy, first of all. I’m so obsessed with David Blaine. I feel like there’s definitely a change in the process, since putting out a record now is such a longer process than what I used to do, which was just to record straight into my computer and then put it out the next day or immediately. It’s definitely a weirder thing, and I’m still learning how to navigate it. It’s definitely grown on me, the concept of putting out albums and making them really polished and touring with them. I look forward to seeing how I deal with it after this, it’s my first time doing this whole process.

How has your process changed as you’ve switched from Bandcamp uploads to label records?

This album is the first time I recorded with a full band, so already that was a lot to collaborate with. My band is now a four-piece. The label’s really small so it wasn’t like there were hoops I had to jump through or anything. For me, it’s an adjustment from being the one person making the decisions to having to talk to other people about my decisions and being like,

this is what I want, these are the things that I need to control

. It’s a process of figuring out where I want to delegate and where I want to just trust my instincts. It’s a fine line because I think every artist wants to trust their own instincts on everything, but I don’t know about the music industry. I don’t know how putting out a record works so I have to trust other people about things that I don’t know about. It’s been interesting to have lots of people to bounce ideas off and argue with. Overall it’s been great, and I really like having a team and having a band that all cares about making the record sound good, too. Wanting everyone in the band to be happy with the record was the first difficult step. There were four people who all wanted the record to sound how they want it to sound and it was tough to make sure everyone liked it.

Has music always been a big part of your life? Who were your favorites when you were a teenager?

Music has always been a big part of my life, I’ve always studied music since I was a kid. I started caring about music more when I was a teenager. In middle school, I got really into Moldy Peaches, Jeffrey Lewis, The Strokes, Neutral Milk Hotel—stuff like that, classic "I’m getting into music" music. From there, I was worried about other things that other kids in my class probably weren’t listening to, like Fugazi or Michael Hurley. I was also going to see music live at the age, so that’s when I started to think of it more as a thing I could do.

is more dreamy and synthy, but

goes back to a rock sound. Were you intentionally distancing yourself from the past album?

out, I was thinking about how people are going to be so confused when we put a rock album out after this. It seemed like we were going in this new direction, but then we pulled it back to what we already sounded like. I guess I was just like, let people be confused. We’ve been playing the songs from

with the full band, too which is fun.

What made you decide to revisit older songs for

? How has this reflection deepened your work?

When we started recording

, it’s the first album we’ve done with the full band, so we just wanted to like capture the songs that we’ve been playing live for a while. The versions that we’d grown proud of just happened to be older songs because we’ve been touring with them for a while. I think for me, recording them years after they were written was a really interesting experience. It deepened it for me in that I could revisit everything emotionally with slightly more mature eyes. So I had to give the songs new meaning in a personal way. I don’t know if that is something that people can feel in the performance but I feel it when I perform it. I feel like I’m giving it a new emotion because sometimes with really old songs it can turn into muscle memory, and you can just be playing the same song over and over again and it's robotic. For me it’s really important that that doesn’t happen so I have to put new emotions into it constantly.

How did you begin to collaborate which Porches? How did this influence your personal work?

I wasn’t going to have a band, but then Aaron [Maine] from Porches offered to play drums and said I should make a band. So that definitely influenced my work, because it’s the reason why I have a band. Pretty soon after that, I started playing bass in Porches. I think touring and playing someone else’s music was really good for me because it opened me up to get over stage fright and let loose. That opened the door for me to be able to play my own music more.

was produced by Aaron so that’s very him. You can really hear everyone in my band’s different musical inclinations and influences on

because everyone’s bringing really different backgrounds to it.