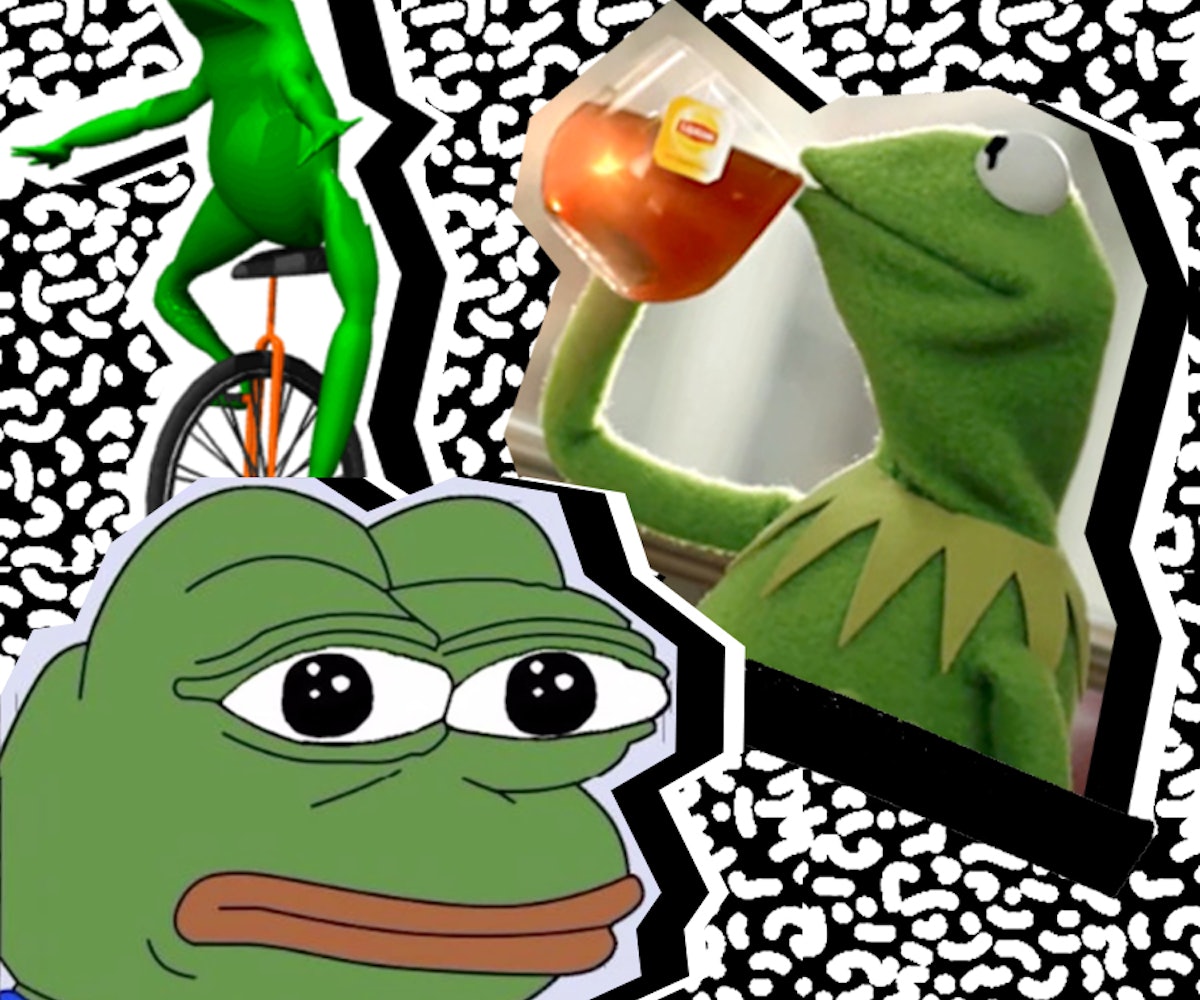 Every meme has an expiration date, but there's one genre that continues to stand the test of time: frog memes. The oldest of the group to go viral is Kermit the Frog, who Jim Henson introduced to audiences pre-meme era when The Muppets premiered on television in the 50s. Although Kermit was featured in a number of shows and movies afterward, he hit a new level of celebrity when a scene from his Lipton Tea commercial was used for the "But that's none of my business" meme.

Let's rewind back to 2005 when Matt Furie published his Boys Club comic book on Myspace, and the web met Pepe the Frog. From his "puffy, heavy eyelids" and the "little circle of white in his pupil" to his "butt-shaped forehead" and "fat, smiling lips," it was easy for inhabitants of the internet to become enthralled by him. But even with the variety of forms that he has evolved into—Beyoncé, The Weeknd, Lana Del Rey—and tons of merchandise covered in his "little stoned froggy face," there's still not enough Pepe in this world. Fast-forward to today, and everyone is caught up with "dat boi," a multidimensional frog riding a unicycle straight into our hearts.

Whether we like it or not, frogs are having a moment in pop culture right now. Since there isn't a degree for memes yet, I decided to consult the next best thing to an expert: one of the original frog creators. Pepe's moniker comes from a famous penguin from Columbus, Ohio. "Pe Pe became a mascot for a local grocery store, and I became fascinated by him," says Furie. "Penguins and frogs seem like they would have fun together in the storybook world."

Furie points to the "non-threatening and chill" nature of frogs to explain why people are drawn to these green creatures. "They enjoy hopping around, swimming, relaxing, and eating insects. People enjoy hopping around, swimming, and relaxing, but just a small percentage enjoy eating insects," he adds. "Perhaps the trend is preparing our collective selves for a time when eating bugs is more commonplace in the near future. Insects are a great source of protein and can be harvested with far less consequences to the environment than beef, chicken, dairy, etc."

While the purpose of memes is to amuse the general public, something about them resonates with people on a more personal level. Joke as he may, Furie has somewhat of a deeper connection to frogs than you may be aware of. During his youth, he recalls listening to the song "Peace Frog" by The Doors, wearing a necklace with a frog charm, and being fascinated by the frogs that he caught outside. "All this stuff adds up to make the frog a powerful symbol for luck, creativity, and childlike wonder," he adds.

That connection has led Furie to become fascinated with the number of frogs depicted in pop culture, some of which include Kermit the Frog—because "he's a great singer, hangs out with Willie Nelson and Alice Cooper, and also looks great riding his bike"—Mr. Toad from Wind in the Willows, Mario wearing a frog costume to go swimming, and all of the frogs in Arnold Lobel's Frog and Toad are Friends series and the video game "Battletoads."

When it comes down to his own creation, Furie knows exactly why Pepe is so relatable to everyone that sees him: the appeal of diversity.

"Pepe is not just another bald white guy—he's a frog—and frogs have a mystical fascination throughout many cultures," he says. "Even when his eyes reveal reflections of mushroom clouds, there is a sense of chillness in his face. We are all slowly dying, we all face our own mortality, and the archetype of the chill frog can help us to transcend ourselves and be okay."

We can only hope that the next frog to get a big break is as lovable as its predecessors. Oh, and may he or she never be mistaken for a tea lizard. Amphibians deserve far more respect than that, especially when they're on this level of fame.

Hop through the gallery and peep some of our favorite frog memes, below.