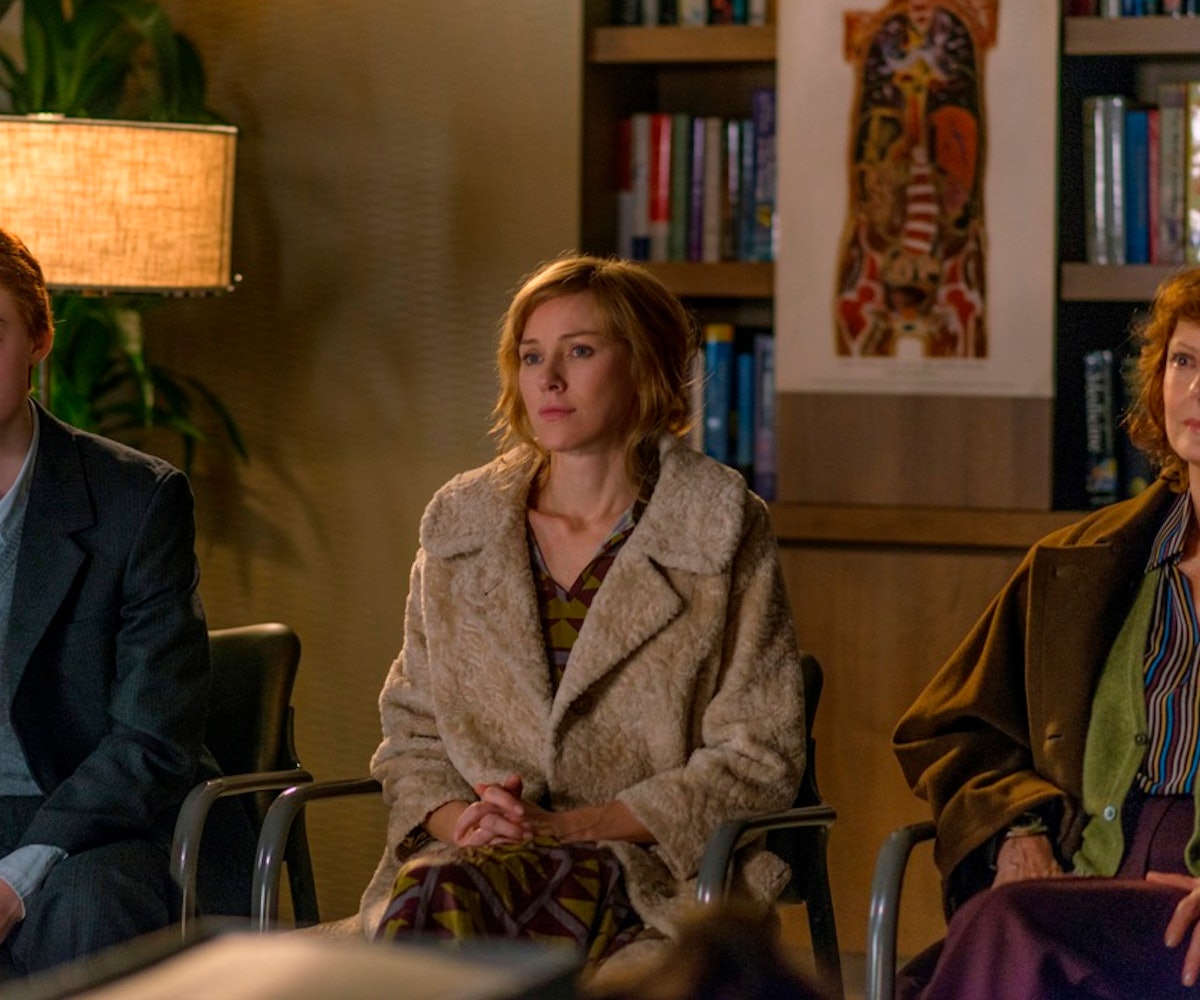 Few films have had as rocky a gestation period as Gabby Dellal’s 3 Generations. After debuting the film at Cannes in 2015, under the name About Ray, the English filmmaker was savaged for her casting of a cisgender actress (Elle Fanning) as a trans boy, while initial reviews were less than enthusiastic. But these controversies make the release of the film’s recut version, in cinemas today, all the more impressive.

A tender, gorgeously shot story of a family coming to terms with their youngest member’s trans identity, 3 Generations not only elucidates the extreme emotional and legal struggles that trans youth face, but also depicts the very real difficulties that their cisgender loved ones can have in accepting and understanding them. Fanning portrays Ray, a wiry New York teen whose medical transition hinges upon getting signatures from his indecisive mother (Naomi Watts) and long-estranged father (Tate Donovan), with sensitivity and wit, while Susan Sarandon’s acerbic lesbian matriarch, Dodo, provides a humorous entry point for viewers less familiar with transgender issues.

There are certainly sticking points, the lack of a trans actor in the lead role being the most glaring, along with the film’s limited success in truly entering Ray’s head. But the presence of a non-sensationalized trans narrative in mainstream cinema cannot be underestimated. NYLON caught up with Dellal to discuss the film’s complicated genesis and why she thinks it’s a victory in the battle for trans advocacy.

What drew you to explore trans narratives and experiences?

I came across it because I met a guy—I think it was about six years ago now—who was moving furniture for my sister. I said, “How are you?” and he said, "It's been a tricky day today because my daughter's just told me she wants to become my son." And he said it in a jovial way. And I had never come across any transgender people at that point, not directly, and so I was fascinated. Not only was he open, he was very adjusted by it. About two years later I called him because I was interested in the subject and had done a lot of research and he said to me, “Actually, my kid’s just had his breasts removed, and we're in the recovery room.” He was so proud of his child and so positive about him, and that's what really inspired me.

How did you conduct research for the film?

I actually did meet several kids that went through that experience. I did meet the original guy who inspired me. Elle and I actually interviewed the man in question when he'd already transitioned, and then I became quite close to another kid who had transitioned, and I went to visit him at his university. I was most interested in FTM [female-to-male] because that was the character, Ray, that I was exploring. I met older people and then I also went to a lot of LGBTQ open meetings in which I sort of was privy to a large section of the LGBT world, not just T but also the LGB. And also my producer is very involved in the LGBT community.

The film seemed to have experienced a few difficulties getting to the screen. How would you characterize what happened?

It was one of those funny things where our film was shown at Cannes—the Weinstein Company bought it, we were really excited about it—but that was right around the time that Caitlyn Jenner was constantly in the papers and there was an Eddie Redmayne film [The Danish Girl] coming out at exactly the same time as us. Obviously, we really were looking forward to it coming out straight away, but, in the end, I probably think it's one of those lucky things because now our community is a tiny bit educated and aware about the trans community, but in no way fully accepting of it. I think it's become a better film because I went back into the cutting room after Toronto. I spent three months doing something really delicate and painstaking without any reshoots, just going in there and trying to work out a way to get into the head of the trans boy without losing sight of the family film and its original intent, which was a film seen through the eyes of the mom. And so while I didn't want to shift that balance, everybody’s interested in the trans situation, and because people are slightly more open-minded about it, we needed to shift the emphasis onto the Elle character as much as the Naomi character.

You came under fire for casting a cis actress as Ray. Did you consider casting a trans boy in the role?

Elle as an actress to me is one of the few young actors who just goes beyond her years, and so I've always, always wanted to work with her, and I'm so proud of her characterization and her enormous amount of work and sensitivity to the character that she was playing, and the enormity of the responsibility of playing that character. I think that she worked so hard and she was so respectful and so aware of her responsibility of the role that she was playing. Another actor could have almost lampooned the idea, not gotten to grips with the understanding of what it is to be born in a body that doesn't align with your mind, and we worked together really hard to try and understand that.

Do you think this film is a useful tool for trans advocacy?

I think it’s all about trying to normalize a subject, not sensationalize it or freak people out so that older people would go and say, “Oh, but my kid would never do that.” In actual fact, it's to say that this could be your kid and not to only think that it's the kids from a low economic background [that are] transgender. There was one kid that I met who I can't name, but the dad said that when they first went to see a therapist that worked with transgender kids in New York, he had two families that he was seeing, and within a year he had something like 300 families. It's because people are beginning to be more open about it. If you take the taboo out of it, then you can genuinely be there to help. So I really hope this film has a social impact and is far-reaching. I really hope that we can.