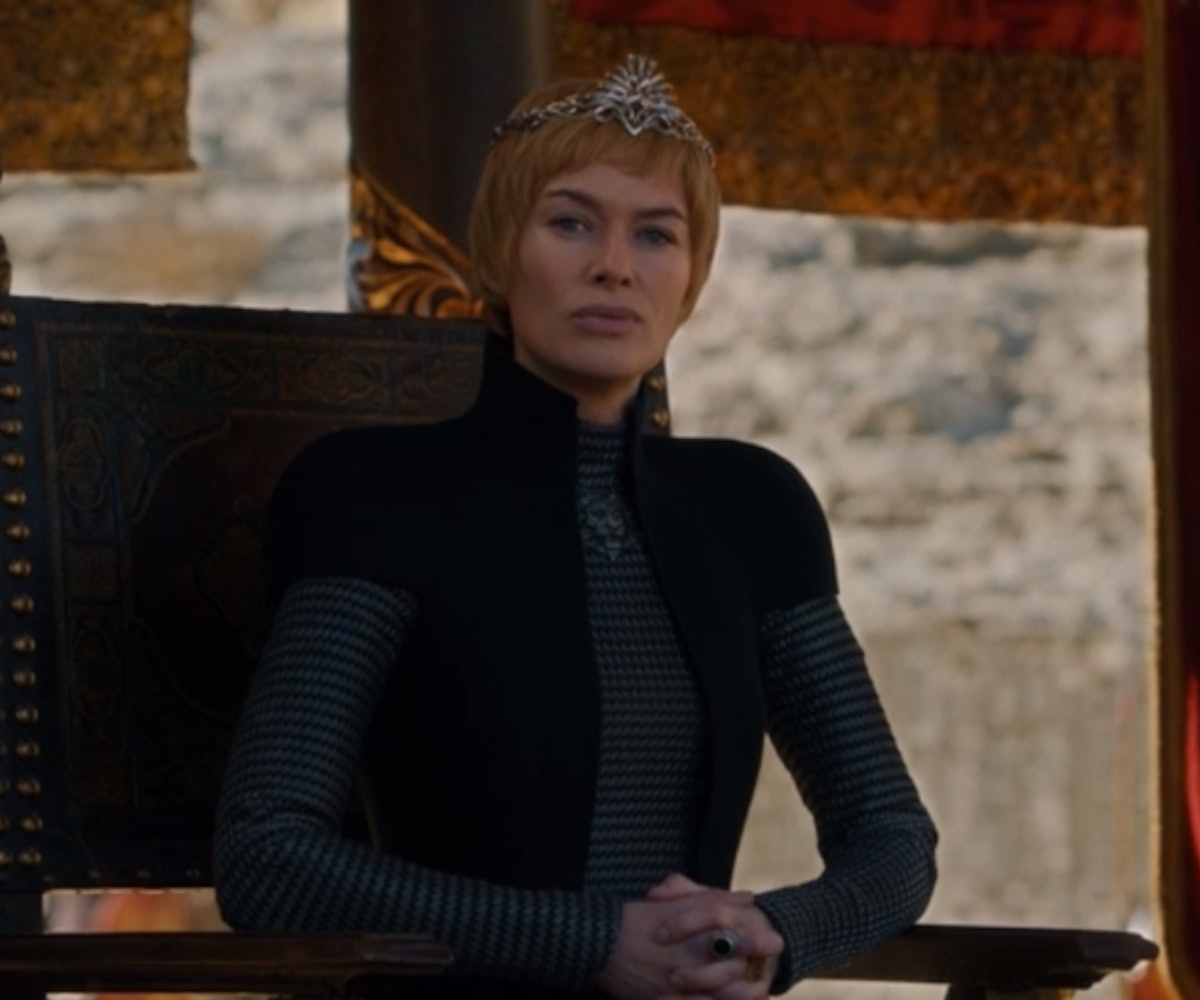 In a Game of Thrones season that had many, many big reveals, one of the biggest happened in episode five, when Cersei Lannister revealed she was pregnant with her twin brother Jaime's child. (Twincest—what a wild ride!)

One of the reasons this reveal was so shocking hearkened back to a prophecy Cersei had received when she was a young girl. In it, a witch warned the young sociopath that she would have three children, all of whom would be buried in shrouds of gold. Young Cersei took this as a good sign, that all three of her children would be exalted royalty; she hadn't quite bargained for the fact that all three would also die when they were mere children, and long before she did. You win some, you lose some, I guess.

But because this witch's prophecy came so completely to pass, it stands that it was accurate, which would mean that Cersei cannot have another child, because she has already had her three. This could mean a couple of things, but the most likely would be that she is pregnant, but that a child will not result from it—at least not a living child. (There are some theories that this child could be the product of Qyburn's machinations, which would be a whole other thing.) Alternately, Cersei could be lying, and she isn't really pregnant at all, but rather just using the idea of the pregnancy to keep others around her in line.

And this... makes a lot of sense. Cersei is, after all, the queen of not only manipulation but also of straight-up treachery. She lies all the time and to literally everyone. Her initial pregnancy reveal to Jaime, ostensibly the father of her unborn child, ended in her threatening him should he ever betray her again. This doesn't exactly serve as a convincing birth announcement, now does it?

When the time comes for her to reveal this news to her last surviving family member, her other brother Tyrion, in the season finale, the announcement is also quite suspicious. In fact, it isn't Cersei who says anything, but rather Tyrion who guesses that she is growing another little Lannister, based on the oh so subtle way that Cersei refuses to drink wine with him (if there was one thing, and only one thing that the siblings once had in common, it was their love for wine), and also the way she clutches her stomach, the universal sign for "I'm having a baby."

After seeing these things and putting... I mean, it's not even as complicated as two and two together, it's more like one and one, Tyrion is all, "Yo, you're pregnant?" And Cersei is all smug about her knocked up status.

But... this is suspicious! After all, we learn soon enough that this meeting with Tyrion was a product of Cersei's manipulation and desire to trick her brother and all her enemies into thinking she wants to help them. (Side note: Didn't Tyrion also used to be good at, if not lying, at least strategizing? What even happened to him?) So it would make sense that she isn't merely lying about where Euron Greyjoy is off to, but also about her pregnancy, in order to garner sympathy from Tyrion, who always loved Cersei's children, even if he didn't love Cersei herself.

Even Cersei's failure to drink the wine is suspicious, because, come on, we all saw Joffrey. There is literally no way Cersei wasn't drinking during her entire pregnancy with him.

At this point, it's as impossible to tell whether or not Cersei is definitely pregnant (and with what, exactly) as it was to know whether or not Sansa and Arya really hated each other. But based on the fact that Cersei has been lying about every single thing she can in order to maintain a firm grasp on her power, it's hard not to think that she is also lying about this, the ultimate trump card in gaining sympathy from her fellow Lannisters—even the one who is on an opposing side.

So we're inclined to say that Cersei is not actually pregnant with the next Joffrey and that this is all just another trick of hers. But who knows? Maybe we'll kick off Season 8 with a scene, in which we see Cersei have her own Melisandre-esque birth, only instead of a shadow baby, it will be some horrific zombie baby with the glowing red eyes of Ser Gregor Clegane. We can dream, right?