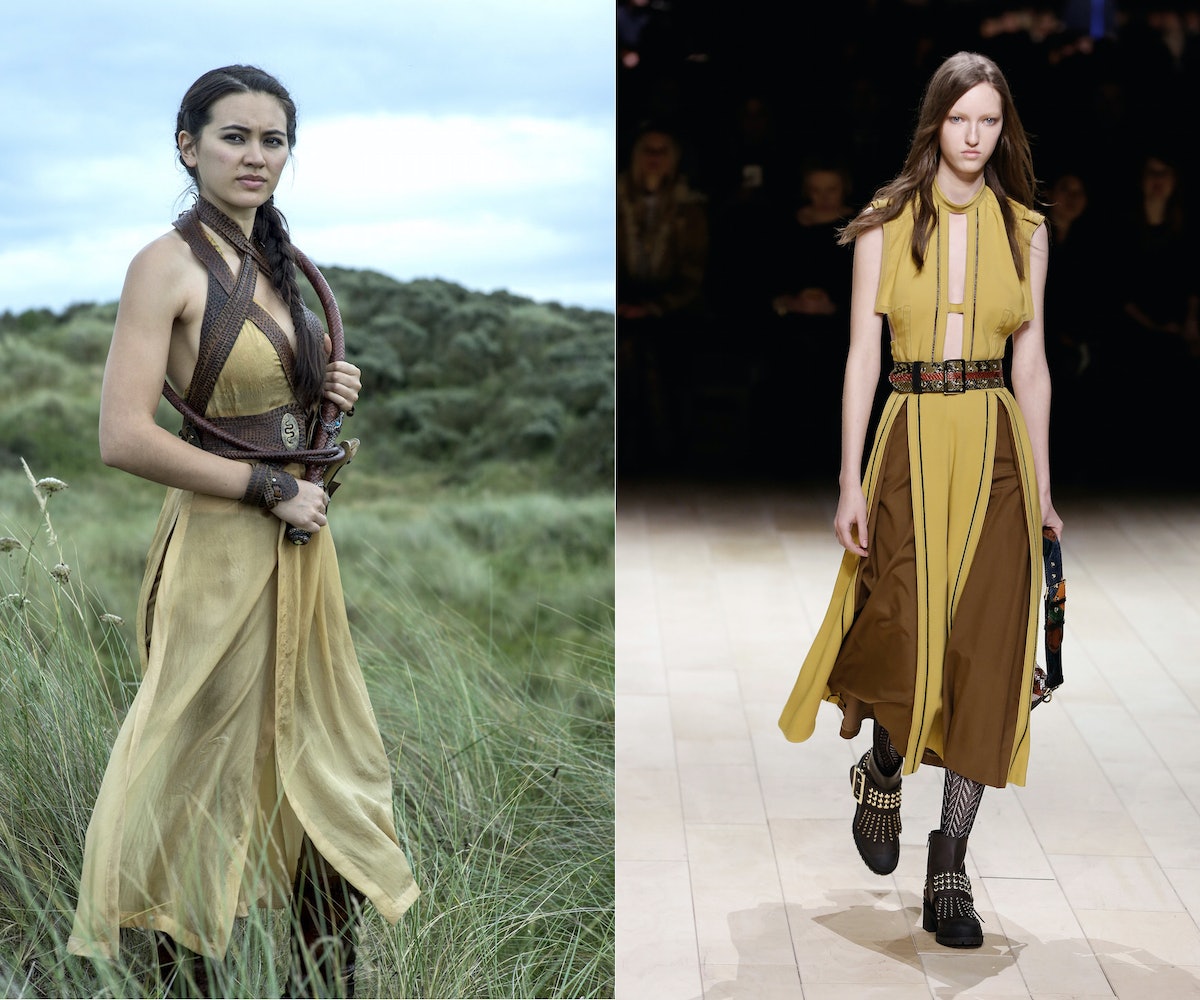 Game of Thrones—that beloved source of fantasy-tinged sex and violence—returns for its sixth season tomorrow on HBO. More so than perhaps ever before, there are pressing questions lingering from last season’s cliffhangers. Is Jon Snow truly dead? (Probs no.) Will Sansa and Theon escape the Boltons? Will Daenerys make allies with the new Khal Moro? Will Khal Moro free the P? Right now, we can only guess.

Now, though, there is at least one series of vital questions that do have answers: What would our Game of Thrones heroes (and villains) wear? With a look to Fall/Winter 2016/17, we can find out exactly which of the great houses of Westeros would wear which of the great houses of the fashion world. Here, we’ve used our style sense and our near encyclopedic understanding of George R.R. Martin’s creation to show you fans of ready-to-wear and fantasy what Daenerys would rock to the Met Gala, what Cersei Lannister would sport for Cannes, and how the Sand Snakes would take to the red carpet. Enjoy our picks in the gallery and remember the Stark fashion motto, “Wintour is coming”.

The daughters of House Martell—a.k.a. the Sand Snakes—trend to the, well, sands (yellow, tan, brown, etc.) and opt for blousy, light numbers that help them deal with the local heat of Dorn and offer freedom for movement (because whipping things is important).

Actually, it's funny because it's pretty darn clear this look was created in direct response to the look of the Sand Snakes (note the whip-like accessory). Nonetheless, there's pretty much no way Nymeria would pass this up.

Traditionally and officially, the Targaryens lean toward blacks and reds with some whites mixed in. However, with Daenerys living in hot, hot Essos almost all her life, she's adopted the local summer colors and, having risen to a queen, taken on a priestess vibe.

And what else would a priestess queen of Essos wear but Versace? Come on, people, you knew this one already.

Florals and bright, organic tones mark the house that provides Westeros with so much of its food. Margaery in particular has gone for subtle floral motifs and gauzy numbers that help accentuate her figure and broadcast her sexuality while still hinting at innocence. It's a smart look given her particular power strategy.

And away we go. This look bathes in florals and nods to fertility while simultaneously hiding and exposing the figure. Sexy, playful, girlish, and romantic—perfect for that scheming queen.

Given this house's outsized wealth and power, it's no wonder gold brocade and hints of blood red are its trademark. Cersei herself tends toward power-dressing with busy patterns, the finest materials, and massive shots of glamour and sexuality.

YAS KWEEN. Gold, heavily patterned with images of powerful women, and accented with feline motifs in line with the house mascot, this is the imposing, high-drama look Cersei would demand for the business summits she would no doubt attend in our world.

The Watch doesn't admit women. Perhaps they'd be better off if they did. Certainly, there is a dark, feminine sexuality in all that black leather and jet fur just waiting to be exploited by a woman tough enough to roll with these warrior monks on the Wall.

See what we mean? Dark, brooding, and defensive, yet romantic in its own way. This is exactly what a lady of the Night's Watch would wear in her off hours.

Cool and organic with aquatic motifs, the Tully look favors emotional intelligence and speaks to the unpredictable weather of the Riverlands. Greens, blues, and silvers dominate.

And here we have those greens, blues, and silvers, but in a romantic, dramatic look that, yes, may be a bit beyond Tully restraint. Sorry, we just felt that after all she'd been through, Catelyn deserved something this beautiful.

It's the one house who's look is wrapped up in their name. Salt-stained greys and blacks mark this house for whom joy is considered a weakness. Layers are needed to keep the cold ocean spray at bay and there's a studied, ragged minimalism going on here. Patterns are for weaker houses.

And here's that grey, ragged minimalism we were talking about and a touch of shimmer that speaks to the family's ocean origins. We'd like to think that, if we could get her into our universe and to a magazine launch, Yara Greyjoy would do well in this look that blends functional, straight lines with a little exposed skin.

Robert went for muted greens and forrest motifs. Renly was more flamboyant with golds and emeralds. But when we last saw a living breathing Baratheon (there aren't many left), Stannis had gone into militaristic greys and silvers and accented with the crimson of the Red God.

And here we have a flashy look that would have possibly pleased all three. Stannis' steels have turned silver to satisfy Renly, the orgnic motifs would have pleased them all, and the red wine color would make both Stannis and Robert happy (such as either of them were ever happy).

It's always fall/winter for House Stark, where greys, leathers, earthy textures, and fur accents rule. Sansa has tried to add a little color in recent seasons by trending toward purples, greens, and other shades that highlight her blue eyes and red hair. Ultimately, though, she and her clothes are all Stark.

And here is the perfect House Stark look. The gray on gray patterning is subtle, but strong. The textures are wool and fur and the overall look has a hint of sadness to it. Winter is most certainly coming here.

Do White Walkers even care about fashion? They are quite literally dead inside. Then again, they are so striking and consistent with their icy blues, whites, and silvers. Also, they've all got a beautiful, spooky thing going on. So on-point for cold weather.

Like the actual White Walkers, this number makes you shiver. Sure, it's a cold-weather look, but the fabrics are thin and capture the light. Haunting!

NEXT UP
Fashion
Apple Martin Is A Chanel Girl Now
fashion
How ‘Spice World’'s Costume Designer Nailed The ‘Scooby-Doo on Acid’ Look
Fashion
Jenna Ortega Is The Face Of Adidas’ Newest Line
Fashion
Collina Strada & Vans Team Up For A Chiller-Friendly Collection
Style + Culture, delivered straight to your inbox.