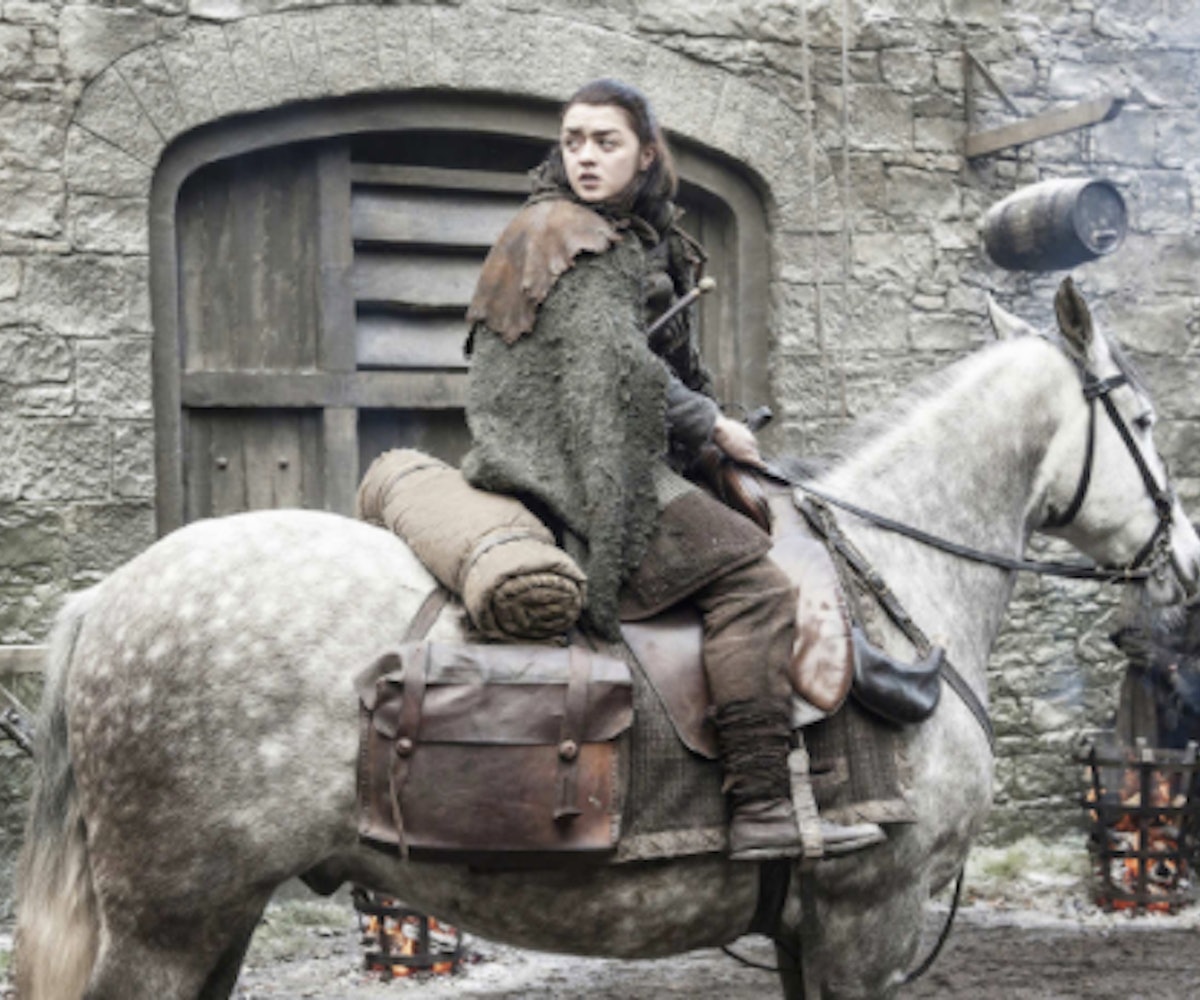 Photo by Helen Sloan for HBO
by Kristin Iversen
July 24, 2017

Easily the biggest challenge of adapting George R.R. Martin's sprawling series for television was having to accomodate for the seemingly infinite number of characters and plot threads; there was simply no means of containing so much exposition within the confines of TV. The main way in which the show has handled this is by getting rid of entire narrative arcs (sorry, Lady Stoneheart and Quentyn Martell fans) and offering clarity where the books only give ambiguity (no, there is no potential Robb Stark heir secreted away at Casterly Rock; his pregnant wife was killed alongside him at the Red Wedding). And now, as the show enters its penultimate season, this reduction in storylines is moving forward at a rapid clip; there's simply no time to waste on plot lines that don't mean anything to the show's end game.

All of which is to say: Bye, Sand Snakes. It's been real. (By "real," of course, I mean, you were annoying one-dimensional and I'm really unclear how useful a poison expert would have been in hand-to-hand combat.)

But first: While this episode certainly had its fair share of drawn-out scenes filled with dialogue that didn't seem to be going anywhere, let's take a look at all that was happening between the lines, and what action will surely ensue. The episode opened with a long discussion about how best to approach the Westerosi invasion and whether or not Daenerys can really trust Varys, who has, after all, betrayed literally everyone he's ever supported. The important takeaway here is that Varys claims to support only the people, and since he believes they will ultimately benefit from having a benevolent ruler, he will support Dany until the time comes when she shows she isn't one. Which, okayyyy. We shall see. I mean, blind loyalty is demanded by the likes of Donald Trump, so, seriously, Dany, steer clear of that kind of rhetoric, but also, maybe don't fully trust anyone, because we're all fallible, including Varys. The only really important thing here is when the Queen of Thorns offered Daenerys the following advice: "You're a dragon. So be a dragon." Let's be clear about something Dany: Always listen to the Queen of Thorns. Always.

Meanwhile, up in the North, Jon Snow has decided that the time has come to forge an alliance with the keeper of both the dragonglass and the dragons, and so is on his way to meet Daenerys and set all other sorts of things in motion, like the eventual revelation Jon will have that, despite being a king, he still knows nothing, because he's not solely a Stark at all, but rather is also a Targaryen. First, though, he needs to leave someone in charge of Winterfell, and who better than the eldest surviving Stark? We're pretty sure that Sansa, who has publicly questioned Jon at every step of the way, will not abide by any rules Jon's been establishing since he became King of the North once Jon and Davos have set sail. (All of which is to say, sorry young Umber and Karstark kids, you're screwed.) Considering Tormund and the wildlings are already off for the Wall, Jon will be leaving no allies at Winterfell other than little Lady Lyanna Mormont. And she's super tough and nothing better happen to her, but she's also just one person. It will, at least, be interesting to see what happens once Arya, who is riding north with the expectation of seeing her beloved half-brother, arrives home to find Sansa, with whom she always shared a... complicated relationship.

Speaking of Arya, it was thanks to her that we got the return of two long-lost but beloved characters, Hot Pie and Nymeria! These three are survivors and we'd happily watch a show detailing their shared adventures, except, of course, that would be hard to do because Nymeria, while still fond enough of Arya to not kill her, is not interested in leaving her wild life to accompany Arya on her journeys. Nymeria's got her own killing to do, thank you very much. And Hot Pie is more than content to be a survivor and perfect his chicken pot pie recipe (the secret is browning the butter!). And Arya? Well, Arya allows both of these encounters remind her that she isn't just a cold-blooded assassin, but rather a person—a terribly, terribly traumatized person—who has had attachments in her life, and can still feel emotions other than vengeance-driven ones. It's actually possible to be hopeful for Arya by the end of this episode, which is a pleasant feeling.

Not such a pleasant feeling is what all the Sand Snakes are undoubtedly enduring right now, because they are feeling nothing, because they are dead. Very dead. It's all thanks to Euron Greyjoy, whose Alt Iron Fleet ambushed the Iron Fleet led by Yara Greyjoy, which was on its way to Dorne to collect the Dornish army for the invasion of King's Landing. That plan is over now, because Yara is... maybe a terrible captain? How exactly does an entire armada sneak up on you in open seas? Hard to say! And irrelevant because the battle was fierce but not altogether that close, with Euron and his men handily dispatching of all three Sand Snakes and capturing Ellaria, most probably as a prize (aka wedding gift) for Cersei. Also captured was Yara. Oh, and Theon's last remaining shreds of dignity. The battle was over as Euron stood on deck with an axe to Yara's throat and taunted Theon to come and protect his sister. Yara pleaded with him; Theon stood almost frozen, his only movements slight twitches, before jumping into the sea, with Euron's squeals of laughter soundtracking a look of pure disgust on Yara's face.

Okay, a few things about this. One, we're supposed to think that Theon is suffering from Ramsey-related PTSD, and that Euron's sadism is too much for him to handle, so he can't act as bravely as he did when helping Sansa escape Winterfell a while back. Which, sure! That's probably true. But also? The battle was over and Euron had won and he was standing there with an axe to Yara's throat. Theon wasn't going to be doing anything but rushing to his death. Does it seem cowardly for Theon to jump and save himself in that situation? Maybe. But he was guaranteeing that, in the moment, neither he nor Yara would die by Euron's hand. He would survive floating in a sea of burning debris. (For how long, who's to say? But there's no chance we're done with Theon yet.) And Yara wouldn't be killed out of spite or by accident in the midst of a struggle. Instead, she's off with Euron to King's Landing, probably, where she at least has the chance of escape (stranger things have happened). So while it's not like Theon acted bravely, it's also not like bravery does much other than increase the risk you'll get killed. Like, you know who was brave? Ned Stark. Robb Stark. Oberyn Martell. Yara Greyjoy. And they're all either dead or captured.

The important thing to remember after this episode is that the world of Game of Thrones is getting smaller each episode. We knew this was coming after the epic Season 6 finale, in which Cersei wiped out whole plot lines (remember the High Sparrow? neither do we) in one fell swoop. Now, the Sand Snakes are gone, the battling sides suddenly seem a lot more evenly matched (like, Qyburn even has that fancy dragon-slaying crossbow thing), and the plot is moving along faster than Euron Greyjoy's Alt Iron Fleet skims across the 14 Seas. As long as we don't take more than one or two detours from the main plot points along the way (not that we're complaining about the Missandei-Grey Worm love scene, because they're great and we do love the way this show depicts all of its male virgins immediately knowing how to go down on a woman) this season seems to be tying up lots of loose ends. Winter came, and it filled in all the plot holes.