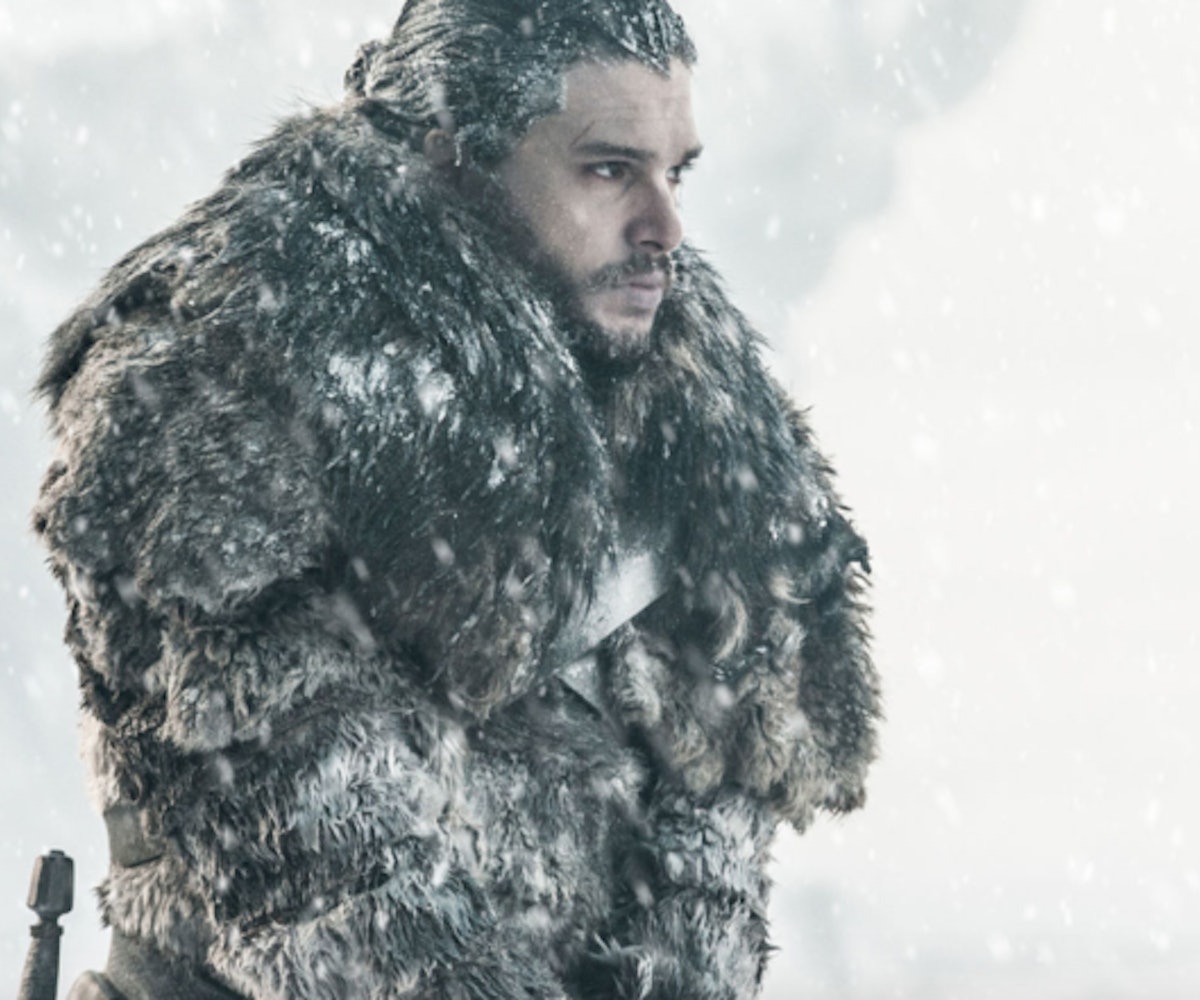 As we remember from last week, Jon Snow and friends have gone beyond the Wall in what can only fairly be described as a suicide mission. Ostensibly, they're out to catch a wight and bring it back to Cersei to show her that the threat of the White Walkers is real, and she should forget about wanting to kill everyone for just one second, because she won't have the chance to do so if they've already been killed and turned into ice zombies. This plan has major flaws (most wights travel in large groups! Cersei already literally has a zombie in the form of the Mountain as her right-hand man, so she knows they can exist!), but a flawed plan has never stopped Jon Snow from moving forward before, and such is the case now.

Our boys immediately get into trouble thanks to a zombie polar bear who just does not want to die again, though he is eventually put down after doing some serious damage to Thoros. But that's really just the beginning of their troubles because, not long after capturing one of the undead, the entire White Walker army has surrounded Snow and Co., who are stranded on a tiny island in the middle of a still unfrozen lake. (Which begs the question? What does it take to get a relatively small lake to freeze beyond the Wall? It seems pretty damned cold up there!)

While it would seem that they're totally doomed, thanks to being outnumbered by, like, 100,000 to six, Jon Snow had the foresight to send Gendry running to Eastwatch before they were surrounded, so that he could send a raven to Daenerys to let her know what was going down. And because Gendry can run a lot faster than he can row, and because ravens apparently fly at the speed of light, it's only about 24 hours before Daenerys comes flying to the rescue on Drogon, with Rhaegal and Viserion along for the ride.

But before Dany comes, some other interesting things happen. Thoros dies from a combination of his wounds and the cold, so that's sad, I guess. It also means that the next time Beric Dondarrion dies, he's going to stay dead, because it was Thoros who kept bringing him back to life. But also, Jorah realizes that when a White Walker is killed, all the zombies it created die also. So as long as they just focus on killing the Night King, they could actually defeat the ice army. Easier said than done, sure, but it's a start!

Also, meanwhile, in Winterfell, Arya and Sansa are not getting along, thanks to Littlefinger's machinations from the episode before. Arya refuses to accept Sansa's totally reasonable explanation about why she had to go along with what Cersei and Joffrey said (i.e. so she wouldn't be tortured and killed), and gets super-creepy with her threats to Sansa, even implying that she's on the verge of cutting off her sister's face and wearing it for herself for awhile. (Um, I'm also still not totally clear on how that face-wearing works, because if it doesn't change your height, I'm not sure anyone would believe Arya is Sansa since those girls have a legitimate 10-inch difference in height. At least.)

Here's the thing about this: A lot of people think it's silly that Arya would still carry a grudge against Sansa for having better penmanship, especially considering the whole point of Arya is that she never cared about penmanship, and the thing that she craved—her father's approval—she totally had. But! Those people forget that Arya is petty, and her whole thing is grudges, and that's partially why we like her so much—it's nice to see someone just act on their fantasies of vengeance because that's not how things work in real life. So, yeah, this isn't out of character for Arya, even if it is annoying, because Sansa has endured tons of horrific things and done many great deeds, including saving Jon's ass during the Battle of the Bastards, and thus reclaiming Winterfell for the Starks.

But Sansa also, it seems, is capable of doing some pretty dumb things, like sending Brienne, her sworn protector, away from Winterfell, to stand in her stead at a meeting in King's Landing. It's an odd move for several reasons, not least because Sansa was just warned about keeping Brienne close by Littlefinger. Now, there's no reason to ever trust Littlefinger, but that seemed like the best advice he's ever given, and so it was curious to see Sansa completely ignore it. Was that strategic on her part? Is she learning to do the opposite of whatever Littlefinger says? Or is Sansa just facilitating the reunion we're all dying to see, between Brienne and Jaime? Hard to say at this point. We will see next week, I'm sure.

So anyway: Back beyond the Wall, everyone is totally about to die because the lake has frozen over, and, for a brief second, it seemed like Tormund would die, and that was terrible because he hasn't spawned any big-like-monster ginger children with Brienne yet, but Tormund didn't die. You know who did die, though? Viserion, Daenerys' dragon who she named after her terrible, abusive brother. He died because the Night King was effective where Qyburn wasn't, and he took an ice spear to the heart, falling with a huge, terrible, black-bloody crash from the sky and into the icy lake below. It was awful. And it precipitated Dany to get moving and away from that horrible place, where dragons can be killed so easily, so she loaded up Drogon with everyone and flew to safety.

Well, not everyone, because Jon stayed behind to make sure everyone else safely flew away... and managed to fall into the lake himself. Which would mean automatic drowning for anyone else, because of all the fur he was wearing, but, of course, he climbed out and, of course, he was then rescued by his uncle, Benjen, and, of course, he made it safely back to Eastwatch, because he had to have a moment of horny longing with his aunt, Daenerys, in which he apologized for the loss of one of her children and called her his queen, and in which she said they would join together with him to defeat the Night King, and they are... totally going to have sex before the season is over, right? Right. And even though it's been emphasized over and over that Dany can't get pregnant, I don't know, with the level of horniness between those two Targaryens, it seems like anything can happen.

Because speaking of anything happening: The episode closes with one of the most ominous scenes ever, as Viserion the dead dragon is dragged out of the lake by a bunch of zombies and touched by the Night King himself, and thus awakened with the icy blue eyes of a wight. Winter is here, and it breathes ice.