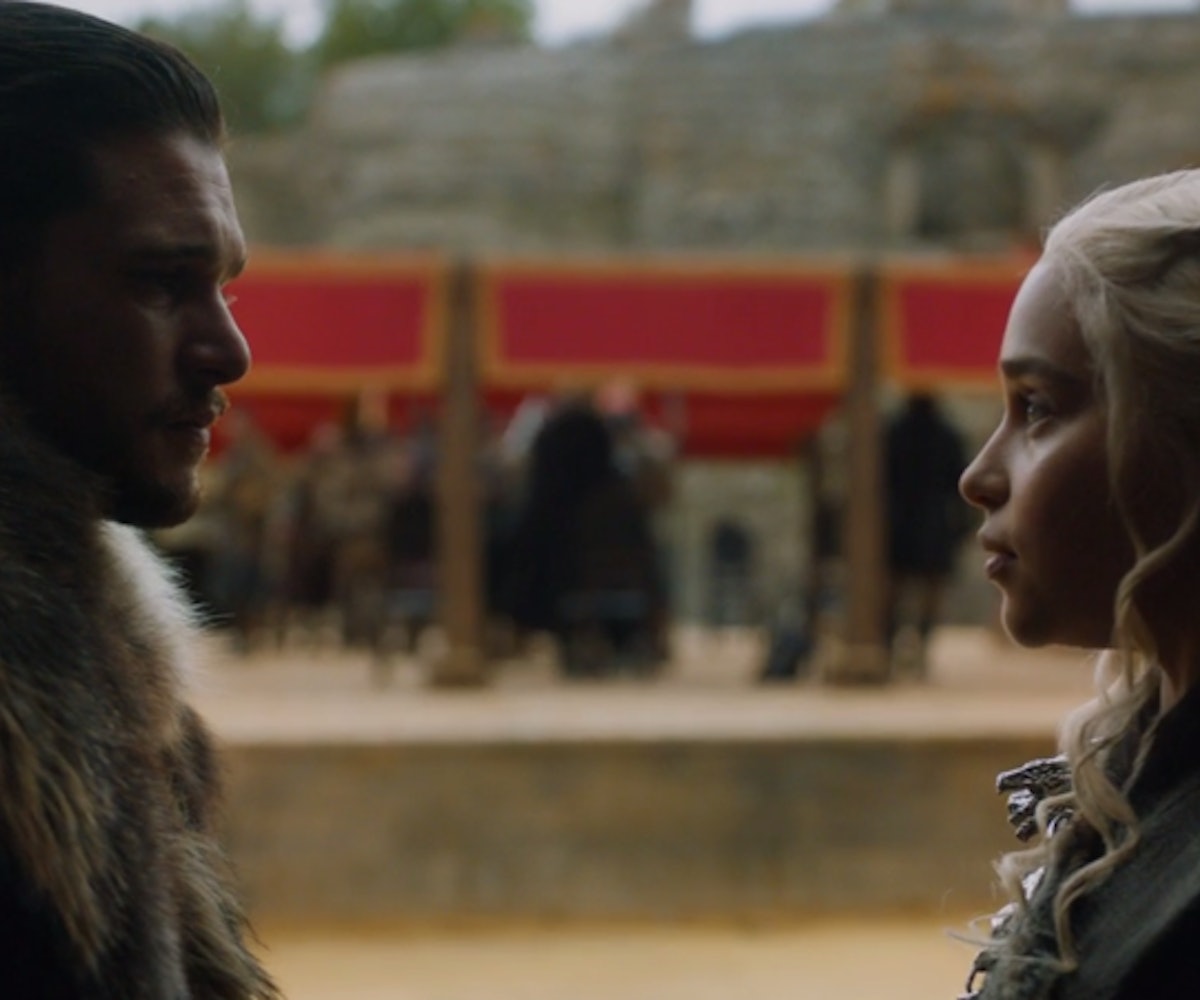 Spoilers ahead for the Season 7 finale of Game of Thrones

Okay, so while we will have a full recap of "The Dragon and the Wolf" tomorrow morning, we figured there's no better time than the present to get our shock at all of the episode's surprises out of our system. Because there were a ton of surprises. Like, multiple people were double-crossed. And then others... weren't? And there was a wedding that we weren't suspecting. Oh, yeah, and we saw the ice dragon in action. And, surprise! There goes the Wall. But let's backtrack a minute. Here are the seven most surprising things to happen in the Season 7 finale, in no particular order.

1) Cersei gets Tyrion all to herself and she... doesn't kill him: Considering that Cersei has spent, oh, literally Tyrion's whole life wanting to kill him, it was quite surprising that she didn't immediately have zombie Ser Gregor cut the so-called Half-Man down by, you know, a third; instead, she chose to practice some basic diplomacy. This made sense in the moment because a truce seemed to be the way to go what with the Army of the Dead looming in the not-so-distant future. So maybe it wasn't so surprising that Cersei behaved in a relatively non-sociopathic way? Well, no. It's always surprising when Cersei isn't a sociopath, because, obviously, she is a sociopath—as she later proves by alienating (possibly forever) Jaime, sending him out into the snow alone, while she has nothing to keep her warm except the little twincest baby growing inside her stomach. Ah, Cersei. Your future looks bleak.

2) Jaime starts to understand the emptiness of serving the patriarchy: In one of the episode's many moments of levity (seriously, there were lots of funny bits, especially as we got reunions among so many of our favorite characters—like the Hound and Brienne, who acted as if they were proud parents of stone-cold killer Arya—Bronn and Jaime stand, talking about the reasons wars are waged, and Jaime correctly, if despairingly, notes that maybe life is just "all about cocks in the end." We never thought Jaime Lannister would be the one to totally get the oppressiveness of a patriarchal society, but we're sure glad he was finally clued in.

3) Arya and Sansa covertly team up together to take down Littlefinger: Speaking of defeating the patriarchy, we cannot emphasize enough how thrilled we were that Sansa and Arya weren't really full of hatred for one another, and were instead working together to bring down the traitorous, weaselly monster known as Littlefinger. No death has felt as justified since Sansa fed Ramsey Bolton to his own dogs. The whole Stark sibling rivalry bothered us immensely, so it was with great satisfaction that we saw Sansa and Arya standing on the walls of Winterfell, reminiscing about their father, and noting that they will survive the cold days ahead as a pack, not as lone wolves.

4) Jon Snow's name isn't actually Jon Snow: Speaking of lone wolves, turns out our boy Jon Snow might be away from his Northern family, but he's actually more of a dragon than a wolf. Or as much of a dragon as a wolf anyway, with a name to match. Yeah, Jon Snow really does know nothing, not even his actual name, which just so happens to be Aegon Targaryen, so given by his mother Lyanna Stark, the lawfully, if secretly, wedded wife of Prince Rhaegar Targaryen. This name thing is a shocker, not least because, well, didn't Rhaegar already have a son named Aegon? Why, yes, he did. So that was... kind of an odd choice there, Lyanna. (Unless, of course, she already knew that Rhaegar's other son had been killed by the invading Lannister army during Robert's Rebellion? Maybe!)

5) Samwell actually was paying attention to Gilly about the whole Prince Rhaegar annulment: So, amazing, we now know that Jon (or should I say Aegon? Eh, I will stick with Jon for now) is not a bastard, and the way we know it is that Samwell brought the news of the secret wedding to Bran, who was already aware that Jon was the child of Rhaegar and Lyanna. But don't go thinking Samwell is a hero just yet, because in the entire time he spends telling Bran about reading about the wedding in the High Septon's diary, not ONCE does he mention that it was Gilly who brought it to his attention. Shame on you, Samwell. Give Gilly credit where credit is due.

6) Turns out maybe we don't have a problem with incest after all: Here's a funny twist of events: The first episode of Game of Thrones ends with a reveal that made us go, umm, no. That reveal was that Jaime and Cersei Lannister were engaged in some serious twincest. It was not cool, not least because it resulted in the crippling of a small boy. But also just because, you know, incest is gross. And yet, here we are seven seasons later, and we find ourselves totally on board the incest train, at least when it happens between Daenerys Targaryen and her nephew Jon Snow aka Aegon Targaryen. But, like, it's still only cool when it's between them and literally nobody else, okay? Okay.

7) Ice dragon Viserion does the unthinkable and takes down the Wall: So maybe this wasn't the most surprising thing, but it was still stunning. Like, we knew the moment was coming that we would see the ice zombie Viserion in action, but we didn't know how completely awe-inspiring it would be to see him take down the immovable object that is the Wall. It was nothing less than chilling to see the Night King riding on the back of a dragon, wreaking full on destruction and guiding plumes of ice-blue fire for a devastating effect. We have to hope that Tormund made it down alive (stranger things have happened on this show), but we guess we'll need to wait till next year to find out. We genuinely don't know if we can make it. Next year seems a really long way away right now.