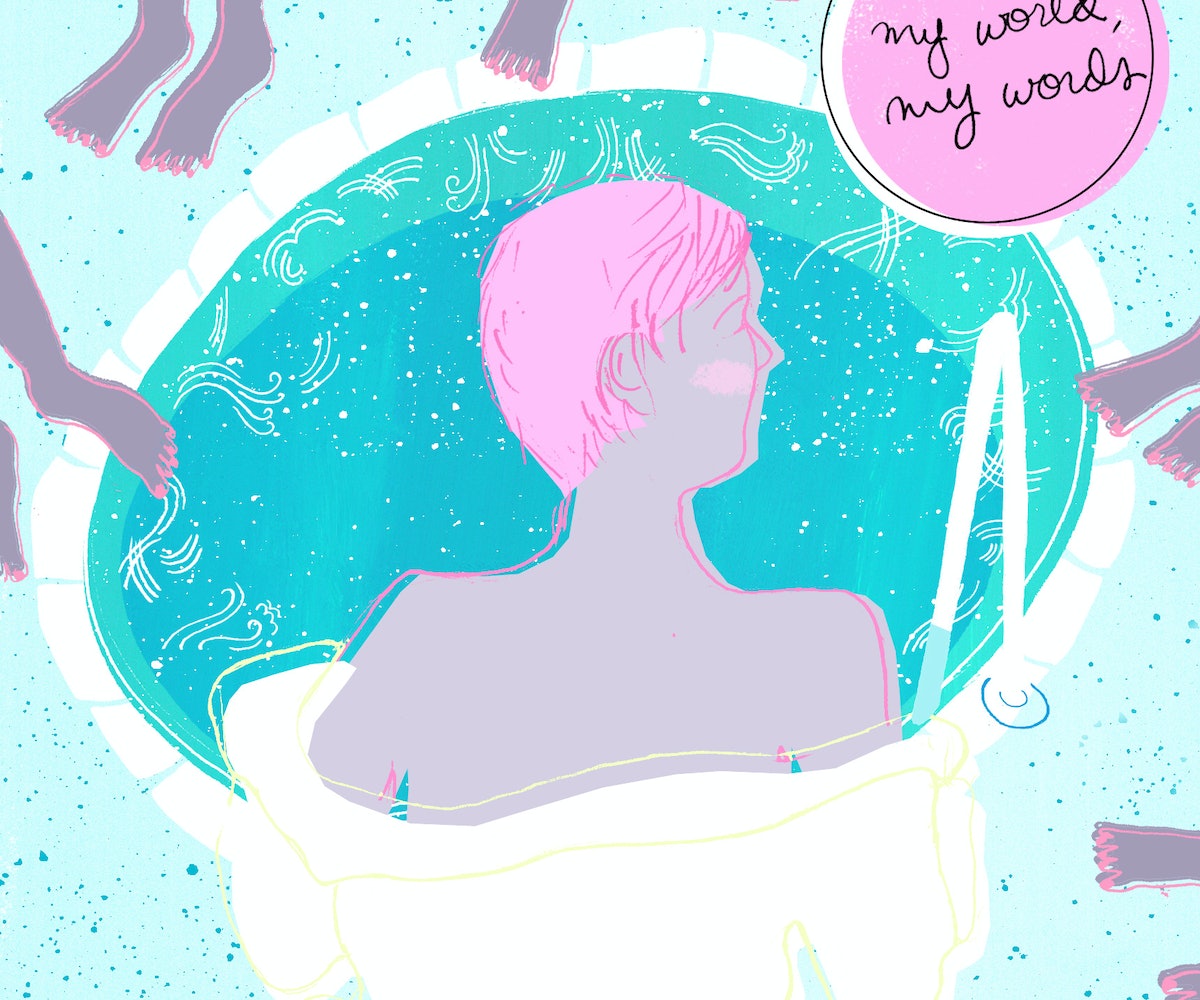 Introducing My World, My Words, a brand-new series of first-person essays featuring totally unique, inspiring personal experiences unlike anything you've heard before. The most interesting stories are also often the most overlooked, so we're on a mission to find them and share them with you. Written by people from all walks of life, these essays will move you in ways you might not expect—and that's the point

It was September of 2013. I had just been laid off from my job and was about five months post-op from top surgery (medically known as a subcutaneous double mastectomy). I knew I needed to re-situate myself within my body and my own life, and was on the precipice of doing so—but first, my fiancée and I had a trip to Seattle scheduled to visit our best friend. It was a romantic vacation we planned when I still had an income, and a body I had memorized.

When our best friend proposed that we visit Olympus, a women's spa just outside Seattle, I knew there wasn't a chance I'd allow myself to go. The Korean-run sanctuary struck me as something specifically for well-adjusted women to be naked, and I felt more like an unemployed person who was nervous being undressed, even alone. That being said, it also occurred to me that maybe the best thing you can do when you've just lost your job and are finally feeling your body heal from serious surgery is go to a spa whose motto is "Let us pamper your mind, body, and spirit" for an afternoon.

I still had some reservations, though. I had a new scar on my chest, running practically armpit to armpit, and I was still learning to make healthy eye contact with it. I told my older sister I was worried in general about people seeing my chest and thinking it was somehow incongruous with the rest of me (my voice for instance), despite it feeling aligned for the first time with the rest of me. She was quick to point out that if anyone's gaze ever seemed to be lingering, it would be because they might be looking at the biggest scar they'd ever seen in their lives, not because they were trying to reconcile my body with a concept of my identity. Not the most comforting-sounding thing but it was a relief to me. I also thought, at the time, that this wasn't really a scenario I would have to navigate. I didn't end up going to the spa on that trip; I wasn't ready.

Fast-forward to our most recent trip to Seattle, which we took in December. My scar is quieter now and a part of me in a way that makes sense. And I have two jobs that are my callings. I am situated in myself and my life in ways I didn't anticipate, except maybe in fantasies.

My fiancée and I were being hosted by our aforementioned best friend, and two more friends of ours had traveled to Seattle so we could all spend the end of the year together. A trip to Olympus was inevitable. And with a gang of homegirls, not to mention a healed body and brain, I didn't think it was possible for me to be vulnerable.

I did feel vulnerable, though. I was worried I wouldn't be allowed in—after all, I generally pass as a young man. And when someone like me is surrounded by a spectrum of feminine beauty, well, it makes my masculinity feel more visible.

To my surprise, it was no problem. I checked in, was given a robe and cap and towel identical to everyone else's and sent on my way. I wanted to throw my arms up like I had just sunk a three-point shot to win a playoffs game and was about to be lifted up by my teammates in a moment of true glory. But what came after that glorious moment, naturally, was a trip to the locker room.

I realized I had to go into it. And I realized it was full of women who were naked or in the middle of getting dressed or undressed. And I would have to get undressed too—and then be naked all afternoon.

The thing about body positivity, for me at least, is that sometimes I have a greater capacity to believe in it for other people's bodies. So, approaching that space, I felt body positive for everyone else. But I felt my body would be interpreted as antagonistic, either because of its masculinity or because I seem to have desire for feminine bodies written all over mine. And at the core all of these interpretations was the fear that I might've unintentionally forfeited my right to be there by having top surgery.

My fiancée could see me processing all of this. She said, "Don't take this the wrong way, but you're pretty too, you know." Remembering that I could pass as a woman (and just had obviously since I was admitted to a women's spa) was a comfort to me and I laughed, undressed, and crossed the threshold from the locker room to the land of pools and saunas. And women.

I've never seen so many kinds of women, not even on the queer beach. Women were reading in pools, talking to each other, strolling around with all kinds of butts and legs. It felt utopian. It also felt like a cult because we were all wearing the same ugly shower cap. Really it was a nice balance of utopian and cult vibes.

Perhaps the perfect image of that balance is the Mugworts tea trough. The women I call my sisters (in fact I had just written them all cards which I signed with the words "in my sister I find my second self") and I gathered around the trough and filled bowls with it. We poured the tea on ourselves and each other; a new but also deeply familiar ritual, as rituals tend to feel.

Is that what happens locally at Spa Castle and Korean spas everywhere? I know naked spas are fraught for all of us with bodies, not just those of us with queer bodies. I left Olympus feeling like I had done something brave. Practicing self-care with others—both women I'm intimate with and women who were strangers—felt like an act of solidarity. Like we were all saying,

Once I sensed I wasn't going to be removed from the spa after all, I was able to feel the mood of the women there, which was this: It's the end of 2014 and we all need to scrub it off our bodies, and then sweat it out of our bodies, then sit in a room that's set to a perfect 70 degrees and write in a diary that dozens of women have already written in and write what everyone else has written before: I was scared to come here but I am here.

NEXT UP
Life
FOMO: The Best Party Photos Of The Week
Life
The Science-Backed Hack That Actually Got Me To Drink Water (& Helps With Headaches)
Fashion
Gigi Hadid Wore A Swimsuit For Her Latest Going-Out Look
Fashion
Cindy Kimberly Makes Her Sports Illustrated Swimsuit Issue Debut