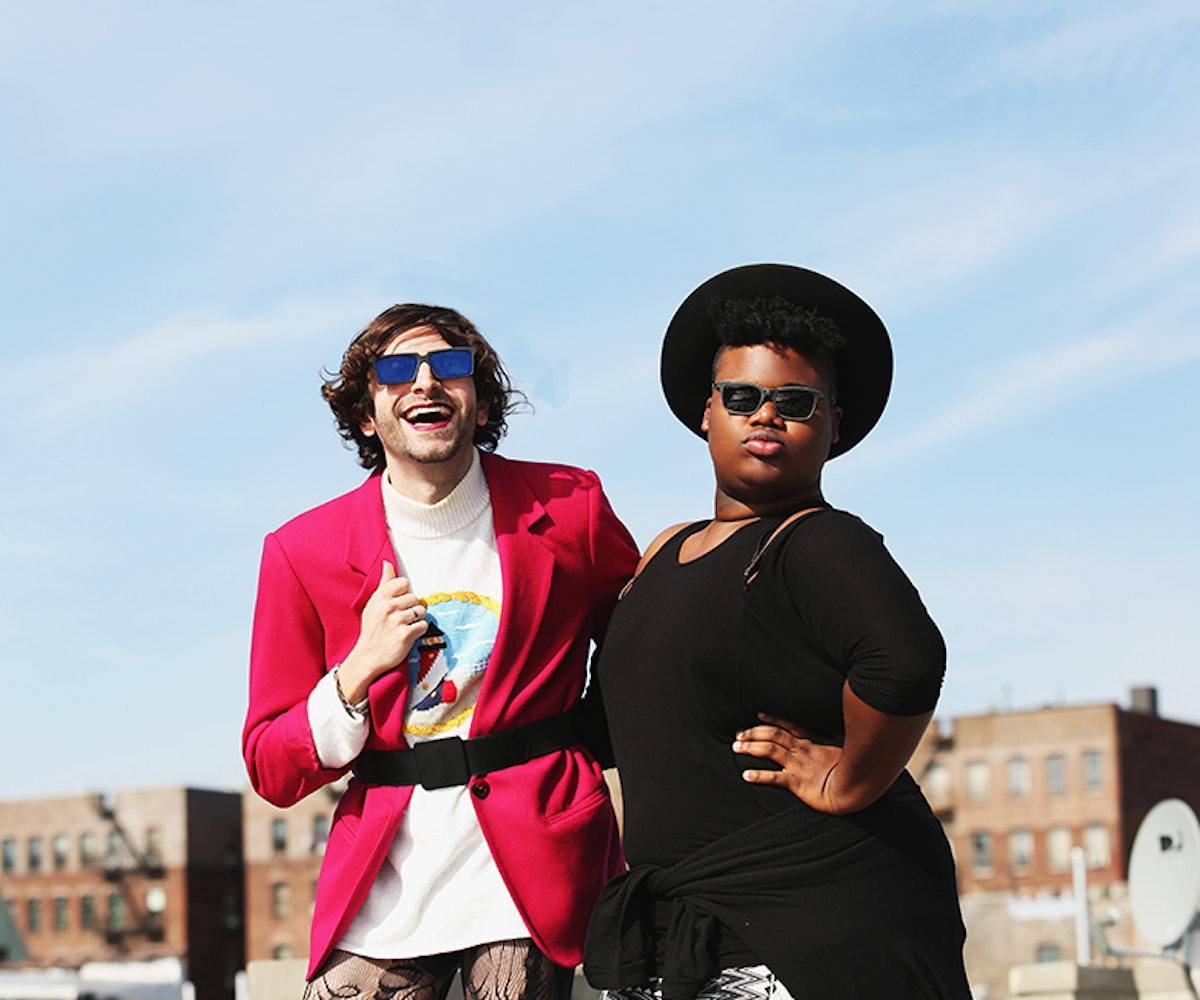 The term genderqueer has been quietly floating around for over half a decade or so, but with the rise in trans visibility and the fight for gender equality, its buzz has gotten significantly louder. To identify as genderqueer means one’s experience of their gender falls outside of the male/female binary. To identify as genderqueer does not mean an individual identifies as transgender. The LGBTQ movement and rise in trans visibility in the media has shed light on the community and brought to forefront the insightful gender dialogue that fueled certain parts of Tumblr. The politics of the genderqueer movement are fueled by fashion, because what’s more revolutionary and educational than asking a genderqueer person why they’re wearing a skirt but don’t shave their legs? Or rocking a red lip with a full beard? Jarrid Jones and Jacob Tobia are two of the most outspoken genderqueer activists today, challenging our perceptions of what it means to be male and female. For most, fashion is a means of finding freedom and expressing it. For Jones and Tobia, as you’ll learn in the interviews ahead, it’s a means of harnessing that freedom and boldly proclaiming it with pride, to a world still stuck within the binary construct.

Jarrid Jones is a genderqueer POC photographer, performer, and activist. They have worked in the fashion industry since the age of 16, collaborating with notable artists such as Mike Ruiz and Nelson Castillo, lending their eye and artistic direction in spreads for Vibe Magazine, Distinct Homme, TimeOut New York, Jones Magazine, and more. Jarrid has also performed on some of New York's most prestigious stages, leading in critically acclaimed productions of In the Heights, Disney’s High School Musical, and AIDA.

How do you identify, and what does that identity mean to you?I identify as genderqueer or gender non-conforming POC (Person Of Color). This means that I do not adhere to the binary social construct or the gender that I was assigned at birth. My gender expression is 100% genuine, with all of its flamboyancy and elaborate details. Being just a boy or just a girl wasn't enough for me, especially with society's ideals of what each of those represented, it never felt right to stick to just one construct or even be a part of it.

Have you gotten pushback from more binary trans folks who identify as male/female?Not directly. I think the only pushback I struggle with from some binary trans folks is the idea of validation, the acceptance and respect that my identity is real and not a phase between the binary, or a reflection of my sexual preference when the case is that I, as an individual gender non-conforming person, have no desire to be male or female or follow cis conformity. I am not just some gay boy who wants to dress up like a girl, it's beyond that. I battle everyday with this need from other people cis and trans to put me in a box and make my label according to what I look like and who I'm sleeping with.

How does fashion impact the way you move through the world? What do clothes represent? What do they allow for or prohibit? Fashion for me is my expression, my fight, my activism, and my safe haven. If I feel beautiful with my outward appearance, according to my own beauty standards, then I feel beautiful and content internally. It allows me to open conversation to people who would never think to speak to me and spread acceptance, love, and especially appreciation. I spend a lot of time of creating the image that I feel outwardly expresses who I am. As for prohibition, it really depends on what I'm being blocked from. If my style and fashion and outward expression don't comply with a specific person or place's standards, than I simply would rather not be there. Other than music I feel clothing is one of the great universal languages that speaks to so many people. It's a physical monologue that allows people to speak loudly and unapologetically without ever opening their mouths.

Is there something people ask you that you're totally sick of? Is there something you'd like more people to ask?There are so many! But If I had to choose, it would probably be, "So, you want to be a girl?" I swear you give people your identity, your pronouns, your transition story, and your full-on queer journey and they come up with the most basic conclusions. Sometimes I just wanna fire back with, "So, you want to be a complete idiot?" But I realize people process things at different times and at their own speed. I would love for people to ask how I attain my freedom within myself and the society I live in. I can talk for hours on letting go of construct and enabling oneself to live one's own truth and not the narrative society writes for them.

Have you gotten pushback from binary trans folks who identify as male/female?I've rarely gotten pushback from other transgender people who identify within the gender binary (as men or as women). Quite the opposite, I think that all trans people—even those who identify within the gender binary—have a gut level understanding that binary thinking only hurts the transgender community. Even for trans people who identify as men or as women, there's often a period of time when folks will be perceived as gender non-conforming during their transition. So, in order to create a world where transgender men and women can transition safely and publicly, we need to create a world that is safe for people who are, or who are perceived to be, genderqueer. The more we can open up the gender binary and help people understand that there aren't just two genders, the better off all transgender and gender non-conforming people will be.

How does fashion sculpt the way you move through the world? What do clothes represent? What do they allow for or prohibit? For me, fashion is profoundly political. When I put on a skirt and walk out the door, I am taking an active stand against a world that devalues the bodies and lives of transfeminine and gender non-conforming people. Whether I like it or not, my fashion is under constant scrutiny by the rest of the world, and I am putting myself at greater risk for violence, harassment, and discrimination by choosing to express my authentic aesthetic self. But I shouldn't have to think about my fashion like that; I shouldn't have to think about whether or not someone will assault me because I'm wearing a skirt. No one—including cisgender women—should have to think about that when they get dressed in the morning. We deserve to live in a world where expressing femininity doesn't put you at risk, and we deserve to live in a world where everyone's safety and identity is cherished. Despite all of this, I find fashion empowering because it is a tool that allows me to proclaim my identity and my vision for the world to other people.

Is there something people ask you that you're totally sick of? Is there something you'd like more people to ask? Ever since I started wearing high heels, people have started asking me if my feet hurt, and I just want to be like, "Duh. Of course they do. Whose feet don't hurt when they wear high heels? That's kind of how this whole high heel thing works." The question annoys me for two reasons. First off, that question always reminds me that, yes, in fact, my feet are hurting. So then I'm thinking about how much my feet hurt. But the bigger issue that I have with that question is that people never ask cisgender women if their feet are hurting when they wear high heels, so why ask me? If you don't care about a cisgender woman's feet when she wears heels, why do you suddenly care about mine? Shouldn't you care about everyone's feet? Also, shouldn't you respect that patriarchy and rape culture compel all of us to make weird compromises about our bodies? Instead of asking me if my feet hurt, why don't you just compliment me on the fact that I'm able to love myself despite growing up in a patriarchal and transmisogynistic world? Instead of asking "Do your feet hurt?" try saying "Wow, you really kick some serious patriarchal ass in those heels! Do you need a foot rub later in recognition of how brilliantly you subverted the gender binary and called into question misogynistic power structures tonight?" I'd like that question a lot better.