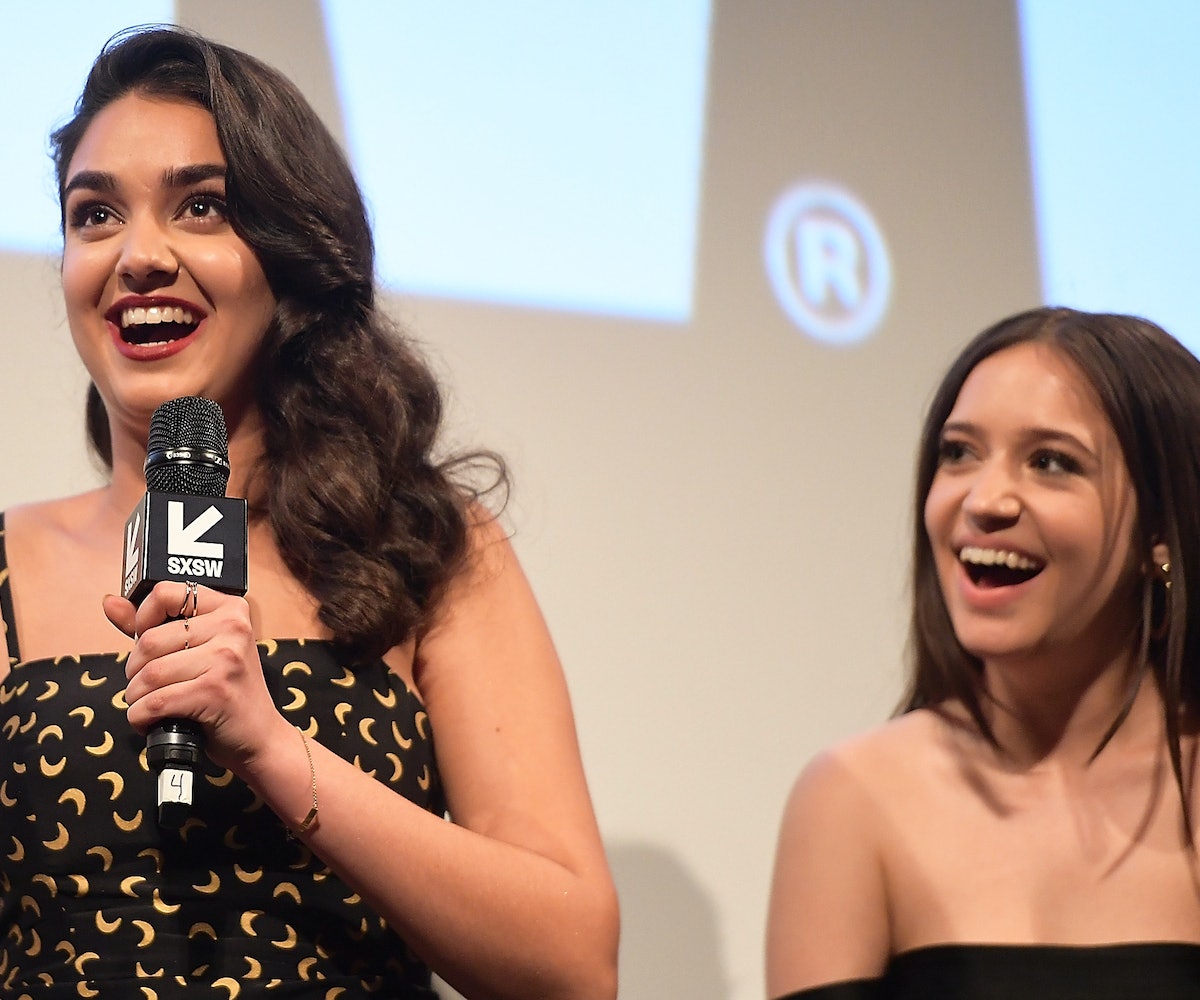 Geraldine Viswanathan and her movie dad, John Cena, are the undeniable scene-stealers of Kay Cannon’s R-rated prom comedy Blockers. Playing Kayla—a confident, all-around overachiever who makes a pact with her two best girlfriends to lose their virginities on prom night—newcomer Viswanathan had a big role as the daughter of a WWE legend. Spoiler: She ended up outshining him in one of the more surprising blockbuster comedies to come to the big screen in recent memory. While the premise may seem banal to some on initial glance, Blockers is a pretty solid film, conceptually-speaking. As a film that paints the precocious obsession over female sexuality as an antiquated, fumbling relic, Blockers completely switches up the narrative—putting the power of in the hands of a trio of teen girls who carry the film with eloquence and sharp wit.

It’s something Viswanathan credits director Cannon for, noting that the first draft of the script was much different from the one she ended up bringing to life. From exploring the lines of consent (Kayla makes a point of telling her date ahead of consuming alcohol that she’s determined to have sex) to making fragile masculinity the literal butt of the joke with a Cena butt-chugging scene, it’s ultimately a film that encourages parents to stop projecting their own issues upon their daughters’ sexualities and embrace the strength in vulnerability, even if it is initially kicked off in a pretty misguided way.

Needless to say, we felt the need to talk to Viswanathan ahead of Blockers’ nationwide premiere about everything from flipping the script on traditional gender norms to upending audience expectations. Read our Q&A below.

What drew you to Kayla?

I liked being a teenage girl who's so confident and aggressive in the way that she does things. She's so down and game to do anything, which is really from her athletic upbringing. Plus, her dad is so intense, so she has a lot of these traditionally masculine qualities. I also loved the relationship between her and the girls. And Kayla’s relationship with her dad. I thought it was all so relatable.

Your family’s dynamic in the movie was particularly interesting to me, with John Cena playing your dad. He’s kind of the epitome of what most people would think when you say super-macho heteromasculinity. What was it like to see him embrace this role?

He's so great. He's a lot more than what meets the eye. You see him, and you're like, "He's this giant wrestling dude," but he's so sweet, really smart, and well-spoken. I learned a lot just by being around him. He's very wise.

It was also really cool to see him married to Sarayu Rao, who [plays] this badass Indian woman. And I think Kay Cannon was quite responsible for that, and Universal, as well...I think it's good filmmaking. Like, why can't John Cena be the super-emotional, stay-at-home dad? And why can’t the mom be this badass, working mother? It's such a cool dynamic. I really like that scene with [Kayla’s mom] Marcy, when she’s talking to the rest of the parents and is like, "This is messed up." You can kind of see where Kayla gets her feistiness from.

I think there's been some misunderstanding surrounding the film, with a lot of people initially dismissing it based on its premise. What do you think about that?

I guess the concept itself does sound inherently sexist, but the film is a journey about discovering why that [virginity stigma for girls] exists, and why it's bullshit. [The shaming] is all coming from the parents, and, trust me, the parents are not the heroes in this movie. They learn their lessons.

All the kids actually are great. [Our dates,] they are purely there for the girls, they are so respectful of our choices, which I don't know if I've seen before in a high school, virginity-loss prom comedy. It’s is not just for the gag. I think it’s a good example of how we should interact with each other when it does come to the time. I think it's a really nice depiction of these kinds of decisions in [teen] relationships.

I also think it's cool that this movie also might attract audiences that go in thinking that it's just gonna be a silly John Cena butt-chugging movie, but then end up walking out being like, "Wow, I'm surprised by the thought behind that film." I hope they can learn something and we can turn a new page in the way we depict young women. I think, if it was marketed as this feminist movie, it might deter some people, which is sad, but, at the end of the day, the goal is to get as many people on the same page.

Do you think this movie is gonna kick off a new wave of feminist blockbusters?

It's definitely funny that it's taken this long to have [a feminist film made in this] format and with a fresh perspective. I guess that's the Kay Cannon touch. She did Pitch Perfect—she wrote all those films—it has a very similar, female empowerment perspective and is very genuine. I hope that it at least inspires people to get more creative with their storytelling because it's a real honor to be part of something where none of the three [protagonists] are white, straight guys.

Another thing that I love about the movie is that the women get to be just as funny, silly, and outrageous as guys are allowed to. There's an idea in comedies that, if you want to be a strong female, you need to be stoic and flawless. But a good character is someone who gets to have the same opportunities as guys—they get to be just as flawed and out there as the men.