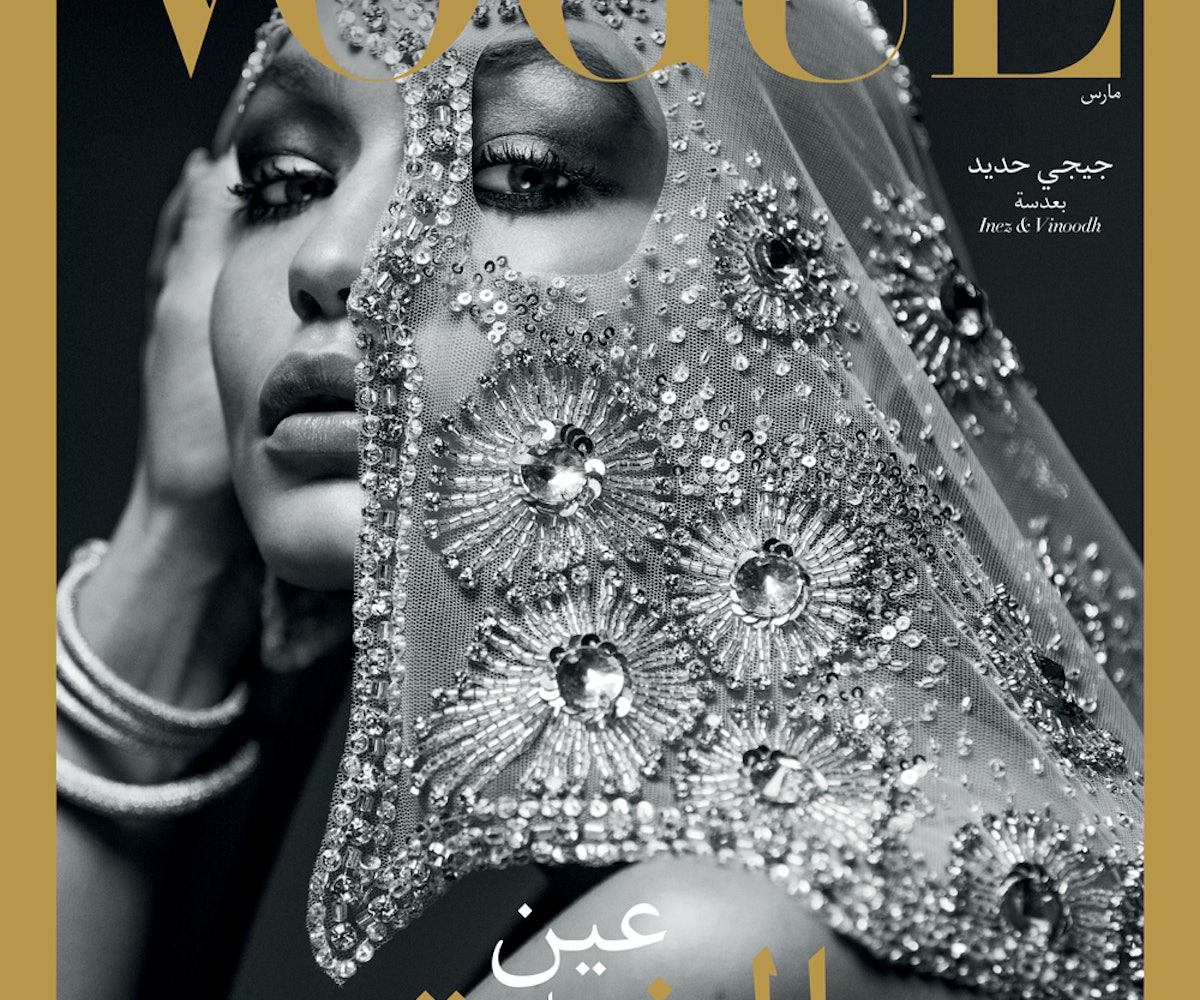 Photo via Vogue Arabia, photographed by Inez and Vinoodh and styled by Brandon Maxwell
by Lisa Eppich
March 5, 2017

Why did Vogue Arabia pick Gigi Hadid as the cover girl of their inaugural issue? "Gigi Hadid is empowered, accomplished, and unafraid of a changing world," says Philippa Morgan, associate online editor for the magazine. "This is not the first time she has been featured on the cover of Vogue, and it won’t be the last. With her, we usher in the dawn of symbolic change, beyond celebrity."

Indeed, the cover image and photo spread of Hadid seems to capture these qualities: a smoldering, powerful woman beneath a hijab. And while some women have applauded Hadid, a non-Muslim (but born to a Muslim father), for helping to elevate the hijab and empower women who wear it, others are angered, feeling the model is wearing the hijab like a costume. For these dissenters, it's another non-Muslim appropriating an important religious item some women have been persecuted for, but for which Hadid will face no discrimination or repercussion.

Although there's some debate over whether or not Hadid is wearing a hijab at all in the cover image—some think it looks more like a beaded veil—the larger photo spread in the magazine shows the model in what is undeniably a pink-and-purple hijab. Morgan explains the intent: "Hadid is the all-American girl, laced with Arab roots via her Palestinian father. She supercharges the Arabian identity with diversity."

Upon debut, Hadid posted the cover image to Instagram with this caption: "I think the beautiful thing about there being international Vogues is that, as a fashion community, we are able to celebrate, and share with the world, different cultures. Being half-Palestinian, it means the world to me to be on the first-ever cover(s) of @voguearabia, and I hope that this magazine will show another layer of the fashion industry's desire to continue to accept, celebrate, and incorporate all people & customs and make everyone feel like they have fashion images and moments they can relate to... & learn and grow in doing so. Thank you @deenathe1st for your vision and for having me on this cover... by the incredible @inezandvinoodh - so much love."

Others, however, saw an empty gesture, even though Hadid has been vocal about her half-Palestinian roots (her father is real estate mogul Mohamed Hadid) and has protested against President Trump's Muslim ban, showing herself connected to the culture. "@GiGiHadid um but are u ever gonna use ur platform to actually help Palestinian ppl or is your country only worth a mention when ur in Vogue," said one person online, while another lashed out with "@GiGiHadid people die for wearing a hijab, I'm just curious if u even practice Islam or even spoke out or against Muslim ban no just tweet."

Several others asked why Vogue didn't put a Muslim model on the cover, highlighting the fact that while Vogue Arabia chose Hadid because she bridges the Arabic and non-Arabic world, it appears to be another attempt to make the hijab and Arabic culture more "palatable" by casting, in Vogue's words, an "all-American girl."

Check out the images below and let us know your thoughts on this complex issue.

(Via Refinery29 and Vogue Arabia)

The debut March 2017 issue of Vogue Arabia: Gigi Hadid photographed by Inez and Vinoodh and styled by Brandon Maxwell.

Gigi Hadid in custom-created Brandon Maxwell. Photographed by Inez and Vinoodh for the March issue of Vogue Arabia 2017.

Gigi Hadid in custom-created Brandon Maxwell. Photographed by Inez and Vinoodh for the March issue of Vogue Arabia 2017.

NEXT UP
Beauty
King Princess and Quinn Wilson Star In Ralph Lauren’s Valentine’s Day Campaign
Astrology
February 2023’s Full Snow Moon in Leo Embraces The Real You
Culture
The Cutest Couples At The 2023 Grammys
Culture
Who Won At The 2023 Grammys
Style + Culture, delivered straight to your inbox.