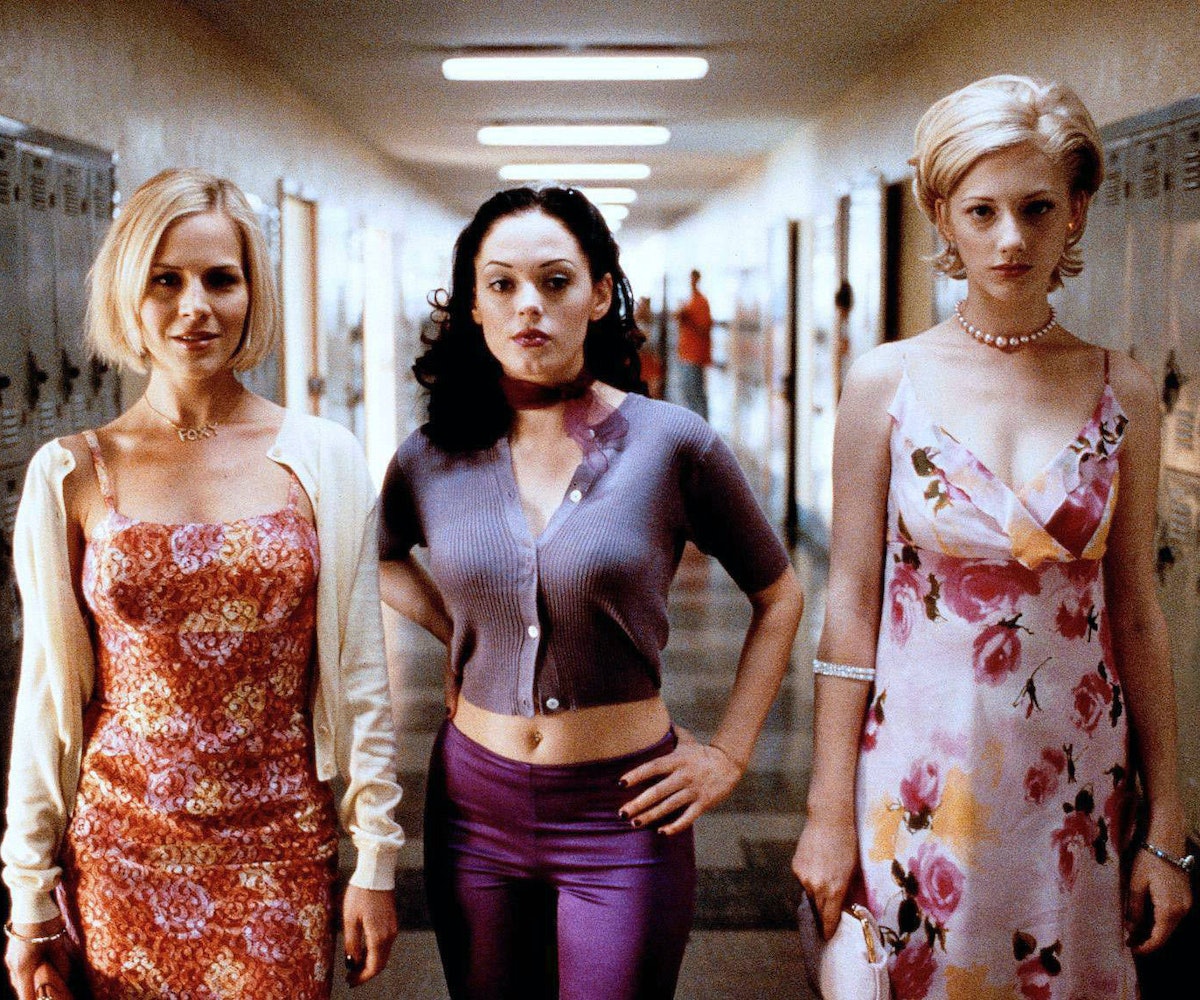 Factually speaking, Halloween comes but once a year. But even though it's a day where death, personal exploration, and all things horror thrive, that doesn't mean that you have to go on a solo journey down to the Grim Reaper's door. With your friends (and, let's be real, probably someone you're not terribly fond of) in tow, you can personify the ultimate girl gang.

No need for any #squads—that's for all those unoriginal people at the party. Instead, channel the coolest girl groups from television and film's past. Click through the gallery for some inspiration.

Death thrives on All Hallow's Eve, but that doesn't mean that it still doesn't totally bite. So why not kidnap your best friend, stuff a jawbreaker in her mouth, throw her in a trunk, and work the rest of your high-school career swimming through the cruel politics to cover it up? It'll be totally worth it. There will be makeovers and ascots and threats, and maybe you'll even find that fine line between pleasure and pain. So go ahead, kill the teen dream. Everyone else will get used to it.

If you're young, hot, rich, have an absurdly large Instagram following, and your name starts with a K, congratulations: You're probably a member of the Balmain army. In order to keep your membership active, you must: 1.) Master the signature intense stare, which can pierce through any and every soul; 2.) develop an overwhelming affinity for shoulder pads and cinched waists; 3.) Be able to endure a tight, migrane-inducing high ponytail. Good luck, friends.

If you've always felt like it was your destiny to win love by daylight and fight supernatural forces by moonlight, then slap on that pleated mini-skirt and tie the biggest bow you possibly can around your neck. It's time for you to take control of your ultra-Kawaii being, with your girls by your side.

Listen up, pledges. If you want to have a total Chanel-o-ween, you have to get a few things straight. It's the most important day of the year—I mean, it's the one day you can terrify the s**t out of children and have it be socially acceptable. Make sure to buy some severed appendages for your Instagram followers and don't forget your fur—not like you would ever even fathom doing that. Oh, and this year's theme is the first ladies of assasinated presidents.

No solid Halloween plans? Come on, just go to Paris. You know you wanna rob. Why not indulge in these bad choices and America's "sick fascination with the Bonnie and Clyde kind of thing"? It will all be a huge lesson for you to grow and expand as a spiritual human being.

When you're held captive by a psychotic monster-of-sorts in a post-apocalyptic desert wasteland, things can get a bit tricky. But when you band together with his other kidnapped wives, you realize you can fight for your freedom against a horde of misogynist, post-apocalyptic brutes. And also, you can walk around like priestesses who stepped out of a Free People catalog.

The Ashleys from Recess

Bonded together by your given name and love of collared uniform sweaters and mini-skirt sets, you guys are, like, totally the queen bees of the playground. And, like, remember: If you find out that your enemy is also named "Ashley," just remember that they have to join. It's just, like, the rules.

Do you ever want to run away to Florida to engage in a week of debauchery, half-nakedness, gun blow jobs, and a massive shootout? Yeah you do. So rob that bank, get that cash, and make it happen to sweet neon-light visuals.

You're young, you're rich, and you were invited to that college party. Now don't fuck it up by throwing up all over the place, okay? Or maybe sabotage it all and enter into an unhealthy relationship with a sociopath. That works, also.

The Lizzies from The Warriors

When you're part of a literal girl gang, you do what you need to do to keep control of your turf. Decked out in flannels and sweaters with the most perfect frizzy hair, you seduce the overstepping rival gang and attack.