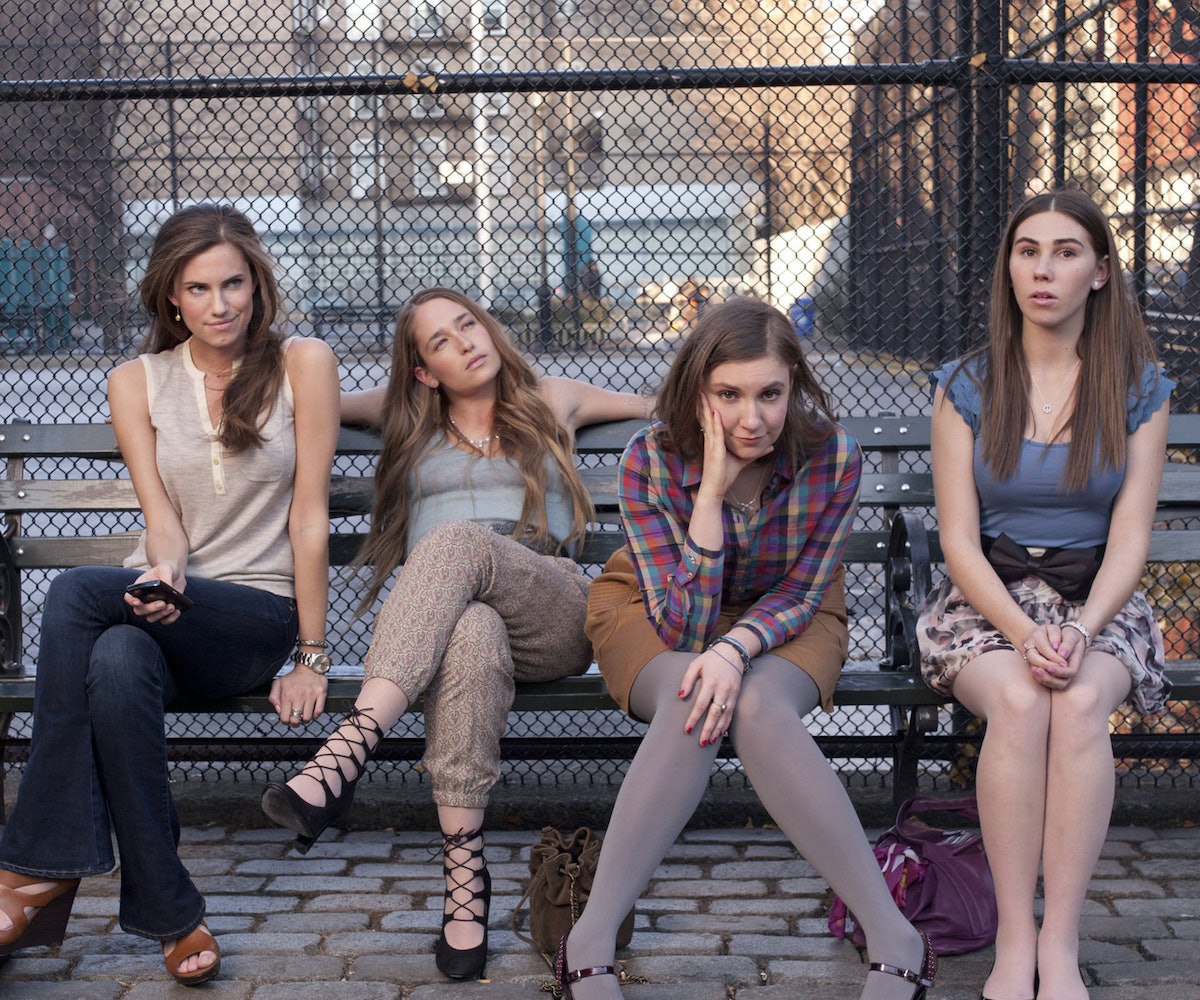 We have a very, very long list of why we love Girls so much, and just one of the reasons is because it's so relatable. We've all worn plastic dresses (right? right?!), had our diaries performed as songs, or left a screaming voicemail to our best friend about her vagina piercing and ended it with a dramatic, "LOVE YOU, BYE." It's OK, we're girls; these things happen sometimes. But it's not just the everyday ups and downs of being 20-somethings that have us relating to the show; it's also the very places where these semi-fictional life events go down that we know and love. That's right, living in New York City means walking in the very same footsteps as Hannah, Marnie, Jessa, and Shosh (sometimes literally--they recently filmed by our office). From Cafe Grumpy to the club where Andrew Andrew DJ'd, we've got your ultimate guide to experiencing Girls the New York way.

Start your day with a jog (part of a new exercise routine that will last approximately three days, obvs) by the intersection of Dupont Street and Commercial near the East River. This is Hannah and Adam's jogging spot back when their relationship seemed semi-functional in season one. As Adam points out, it's not far from Hannah's apartment on India Street, so you don't have to last long to get the full experience.

You're probably not in a great mood now that you're all sweaty and out of breath. (Or maybe you've managed to get a runner's high. Congrats to you.) Where better to perk or (or, alternately, drown your sorrows) with caffeine than at Cafe Grumpy, where Hannah consistently shows up to work for Ray in a flustered state. This place will turn your frown upside-down with some relaxing music and great drinks--I highly recommend an iced green tea, and don't be afraid to have a brownie for breakfast here. You just worked out, you deserve it.

You're looking to read the works of the greats who came before you in order to expand your mind and soul. Or you're just looking for a copy of Bossypantsbecause Tina Fey wins at life and you'd like to do the same. Whatever your genre, pick up a book at this quirky Williamsburg bookstore, where Hannah and Sandy (Donald Glover) make out during their fast and furious relationship at the beginning of season two. Spoonbill & Sugartown has an old-school charm and an eclectic selection of both new bestsellers and some classics. And we can totally see why Hannah loves it here so much: There's a wall full of moleskins for her to fill with the voice of her generation.

Head over to Bellwether for Saturday brunch with a BFF. Be sure to bring the juiciest story you have, because you have big shoes to fill: This is where Elijah and Hannah have their first meet-up in season one and all things gay and HPV related are revealed. Quick note: It was called the Royal Oak in the episode "All Adventurous Women Do," so don't think we're trying to fool you; we're all about authenticity.

Now that you've been a little social, take your new book over to the East River State Park and read there for a while. This is where Jessa takes her four new puppies (including Garbage and Hanukkah) with Hannah at the beginning of season two, but ironically there's a big "No Dogs" sign right when you walk into the park. (Lena and her team breaking the rules to show us cute puppies on screen? We're falling more in love by the minute.) Even if you can't puppy watch, this is still a great place to relax on the lawn and admire the skyline.

It's Wednesday night, baby, and you're alive. (Or maybe it's Saturday, but whatever. Same thing.) Get your night started with some dinner with friends at this Scandinavian restaurant. No one actually eats here on Girls, but Jessa runs into Jeff (father of the kids she babysits in her sheer dress uniform) right outside. It's a little on the small side, so you may want to break your usual ways of spontaneous fun and make a reservation.

After dinner, get artsy and head to the gallery where most of Marnie's work scenes are shot (before she decided to do a career switch and become a pop star). They have a summer group show exhibition that runs through August, so you and your friends can get cultural and all that stuff. Don't forget to head upstairs for a great bird's-eye view of the art you just saw downstairs!

You need a real drink after pretending to be sophisticated for such a long time. Listen to your inner-Jessa and down a White Russian at this bar, where on the show she skipped out on her suddenly unnecessary abortion. Get hands-y in the bathroom at your own discretion.

An investigative journalism piece is not necessary in order to have a reason to party in New York. Visit the club where Hannah and Elijah have their coke adventure and Hannah rocks a bold neon yellow mesh top (sans bra). A DJ is always spinning at this club, which makes it perfect for having an epic dance party with your friends.

It's been a long day of kind of-sort of figuring it out, but you're in need of one more TV-ready moment before your night is over. Head to the High Line for a late-night walk with your crew, and maybe you'll get the nerve to say something as bold as Booth Jonathan, where he predicted his season two adventures with Marnie during season one. (It's only open until 11 p.m., so if your night is going into early morning territory head here before you dance it out!)

NEXT UP
Ask A Witch
Ask A Witch: How To Survive The Holidays With Hoodoo Magic
Culture
The White Lotus Will Return For A Third Season
Astrology
Your December 2022 Horoscope Fuels The Reboot
Culture
Gucci’s Alessandro Michele Era Is Officially Over