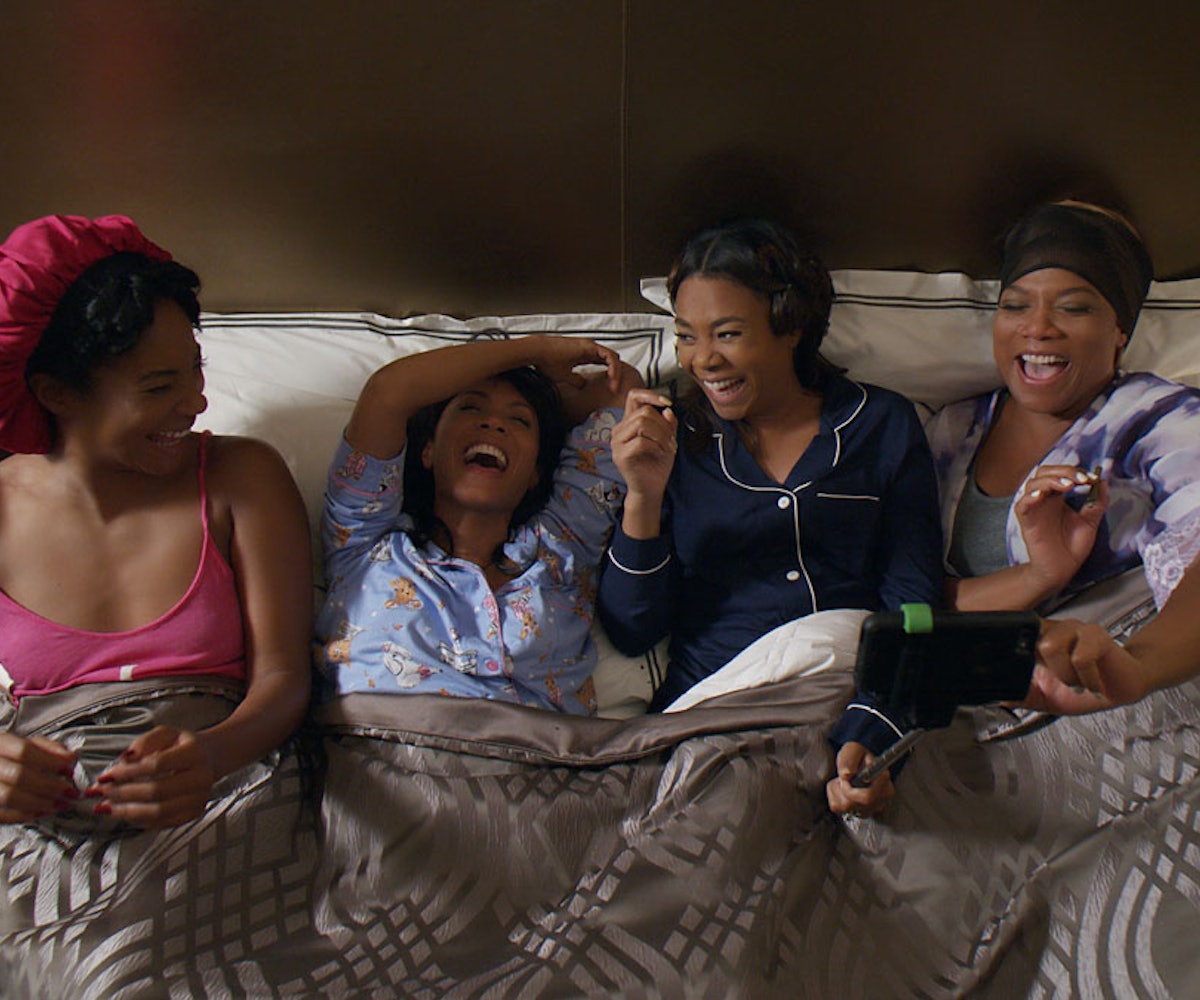 Girls Trip is a unicorn in the film space: a comedy that stars four black female actors participating in raunchy, drunken shenanigans.

From Best Man director Malcolm D. Lee, the movie centers around a group of friends, known as the Flossy Posse, who have come together for a wild weekend in New Orleans. Ryan (Regina Hall) is the friend who appears to have it all—a loving husband, a successful career, really, really great skin—and has even written a book about it. Sasha (Queen Latifah) is a resentful journalist-turned-click-hungry gossip blogger. Lisa (Jada Pinkett Smith) is the conservative, wet blanket single mother (every film has to have one). Dina (Tiffany Hadish) is the classic bad influence, the one who's always responsible for your blackouts. Aside from being wildly funny—mostly thanks to the brilliant up-and-coming actress Haddish (give this woman more roles, Hollywood), Girls Trip is refreshing because, as Tre’vell Anderson of the Los Angeles Times outlined in a recent piece, very rarely are black women given starring, rather than supporting, roles in comedies—not to mention, four black women at once.

Most of the attention—and accolades—black actresses receive are for their dramatic roles, and the recent rise of female comedy movies (Bridesmaids, Pitch Perfect, Rough Night) has been predominantly populated by and centering around white women. And while dramatic roles are necessary, and it's undeniably still tough as an actress of color to get starring roles in any films, that's why a film like Girls Trip is so needed. It helps to normalize the idea that black women are just as layered as everyone else. We tell crude jokes, we have sex droughts and get unbearably horny, we can be tough as nails one minute and super soft the next, and we too can partake in inebriated debauchery. There are levels to the WOC experience—they just are rarely seen on screen.

“I think we need to show all aspects of black lives,” Tracy Oliver, one of the co-writers on the film, told The Hollywood Reporter. “I love Moonlight. I love Hidden Figures, but I also want to see some people who are having fun and just show female friends hanging out. It doesn’t have to always be so serious. We can just relax and, like, hang out and have a good time, too.”

In another interview with THR, Lee mentions that he wanted a “counterbalance to women sniping at each other or throwing drinks in each other’s faces; I wanted some real relationships.” Well, you will find some sniping in Girls Trip, because what’s a female comedy without the occasional tussle, but it's always presented with underlying humor—and ends with the obligatory, somewhat corny reconciliation.

Comparing the movie to Bridesmaids—which many critics have been doing—is fair. It’s a story about friendship, and every woman watching will connect with it because of that, but it will speak to black movie-goers first and foremost. It takes place during Essence Festival, one of the blackest music festivals out there. The ladies engage in a You Got Served-inspired dance-off in the second act of the film, another black-driven movie. And early on, there's a Set It Off joke for fans of the last time Smith and Latifah shared the screen.

We’re also reminded who this film is for every time Haddish declares she’s going to get “white girl wasted” and every time Kate Walsh, who plays Hall’s assistant, tries to integrate herself into their “hashtag black girl magic” vacation. Or even when the ladies kneel down to pray in satin bonnets and hair wrapped in a doobie. Yeah, this one’s for us.

But just like people of color can enjoy films in which they don't see themselves in lead roles, viewers would be remiss if they passed up the opportunity to watch Girls Trip just because a few jokes might fly over their head. As producer Will Packer has said, “The reality is that a good story is a good story, and it will resonate with audiences. Period. You don't need any qualifier on the word ‘audience.’”

So, grab your girls and go see Girls Trip this weekend. Afterward, hold them tight, tell them you love them, and force them to take shots every now and then even when (especially when) they don’t want to. Friendship isn’t always good for the liver, but it’s really fucking great for the soul.

NEXT UP
Fashion
LAPOINTE and JONBOY’s Cute Collab Is An Ode To NYC
Beauty
Meet The Beauty Pros Who Keep It Girls Looking Like It Girls
Nylon Nights
Post NYFW, Chanel Gathers All the Girls for Annual 'Through Her Lens' Lunch
Beauty
Black Lip Gloss Is The Surprising Fall Update Your Makeup Kit Needs