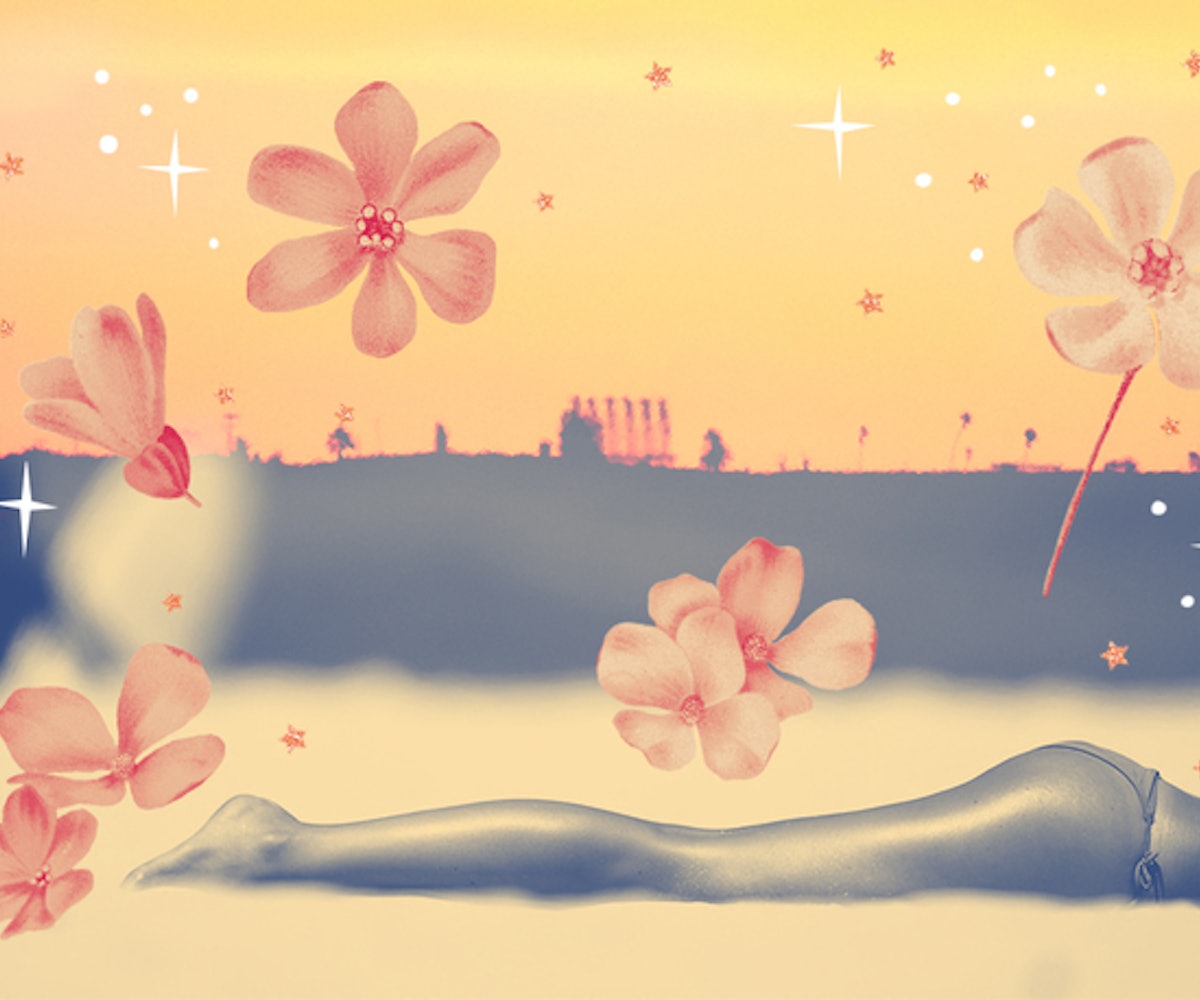 "We're all about faking it," Caroline Goldfarb, one-half of Feral Audio's newest addition to its growing roster of podcasts Glowing Up, says. "We're all about covering up our bad decisions and our poor diet with quick fixes on the outside, to make it look like we're being very healthy." Therein lies the ethos of Goldfarb, of @officialseanpenn and This Week Had Me Like fame, and stand-up comic and writer Esther Povitsky's podcast. They're just two funny, down-to-earth girls living in L.A.. who love beauty, trying new products, and talking self-care regimens. I like to imagine I'm holding my phone to my ear, talking to my girls, while sitting in a robe on the edge of my (future) chic bathtub and painting my nails when I'm listening to an episode of Glowing Up. Imagine YouTube beauty vloggers but without the wide-eyed facade—that's the essence of Glowing Up.

"I mean, we have a little bit of wisdom," Goldfarb chimes in, "but definitely not a lot. We're not totally new. We do have this totally encyclopedic-freaky obsession with products." It's true: Glowing Up was right on time with their tongue-in-cheek but totally sincere reviews of Kim Kardashian West's KKW contour kits that sold out in mere hours. Povitsky and Goldfarb know there's more to niche and It Products than Glossier. (No shade, though!) Both girls have worked their way up from going to the M.A.C counters with their mothers on special occasions and both have a great respect for the ritual aspect of self-care.

So what is the glow up? It's typically used to describe a remarkable transformation toward a more attractive appearance. When you glow up, you feel better; you radiate more. It's about finding what makes you feel good across the board, from the clothes you wear to your self-care habits and the grooming products you use. In other words, the glow up is growing into your truth.

"It’s more about the journey and less about the destination," Povitsky tells me. "It’s a lifestyle; it’s not about expensive eyeliner—even though that can be a part of it, but that’s not what it’s about. It’s really about whether you're evolving in a positive way and are you taking care of yourself? Everyone’s glow up is different. For me, it’s all about feeling like you're on the right path and feeling good."

In Goldfarb's world, it's about finding that flashlight within you and turning it on. "When you hit your glow," she says, "you feel that light within you and your face starts looking a little more snatched and you’re feeling more gorgeous—all because you've been working on your self-care. That’s personal for everyone, but it’s one of the best feelings in the world."

So, to help you get started, we asked the Glowing Up girls to share their secrets for faking that cool girl L.A. glow. Because let's be real here, our flashlights aren't going to be shining all the time. We require recharging. This following guide is your recharging cheat sheet. See you on the glowing side.

1. Befriend serumsCaroline Goldfarb: I truly did not have serums in my life until about a year ago; I was sleeping on them. Serums are so important for your glow. The most important one is definitely a vitamin C serum—it literally will create a glow if you use it. The science of it kind of escapes me, but it’s something with cellular turnover. It gets rid of your pigmentation faster if you have pigmentation scars. It’s just good for you. It’s proven time and time again. I’m not a scientist, I don’t have studies to pull up but just trust in the vitamin C serum. That is the number one tool in your arsenal for your glow.

2. Don't sleep on sleepEsther Povitsky: There’s nothing cute or cool about being competitive over how little hours of sleep you need. That is not part of your glow up. We haven’t been calling it beauty sleep for the past hundreds of years for no reason.

3. Get you a trusty highlighterCG: It's not hard to go out there and get a highlighter at any price point. At Glowing Up, we believe in adding a little bit of highlighter the tip of your nose and your cupid’s bow on your lip. It is so key. It just gives your look that unhh. Get yourself a loose pot of shimmer and go fucking ham with that brush on your clavicle, your collarbones, your shoulder bones; make that shit look shiny.

4. Break that fast in the AMEP: If you eat a big breakfast you’ll feel good about yourself, and you won’t end up starving all day and eating crazy stuff late at night.

CG: So true. Esther opened my eyes to the power of oatmeal with a little scoop of coconut oil right in there. So good.

5. The bigger the salad, the more glowy your glow

CG: A big salad with beans or quinoa and hearty plant-based energy sources in there. You’re winning your glowing. If you eat meat, you gotta keep that red meat and chicken to a minimum. I think fish, especially that of fresh waters, sustainably caught fish—oh my god. Fish are so a part of the glow up. Those Omega-3s—it’s like taking a giant fish oil supplement.

EP: Put SPF on your face every day. No questions asked.

CG: In addition to your daily moisturizer. I also want to give a shout out to Esther who has a gigantic sun hat in her car. It’s a strong look; girlfriend is protecting her damn face, and I respect it. That’s real commitment to glowing up.

7. To chemical peel, or nah?CG: I think at-home peels are a very key part to your glow up. They're so easy to do, whether it’s a really light chemical exfoliation, like a glycolic acid or a lactic acid, which you can do as often as you want or as little as you want. You can move on to the big mama jammas after, where your dead skin will just flop off and reveal that glow inside you.

EP: Having someone, or many people, to talk with about beauty is really important. Sharing your glow up experience builds trust, and you can learn so much from other people. I know me, personally, I’m not going to get up and go work out by myself, but if I have a workout buddy, I’m definitely more committed.