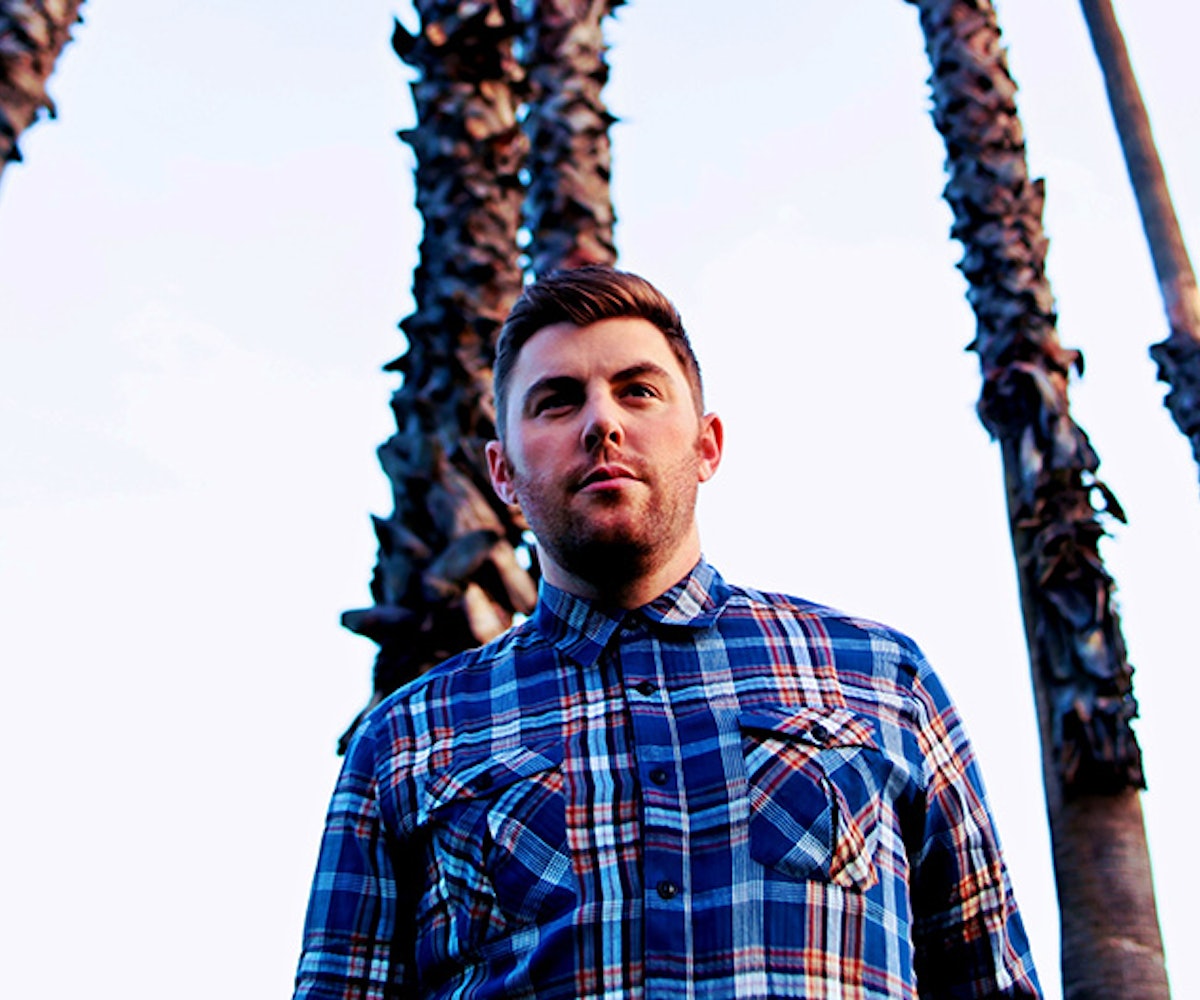 Everyone is always clamoring to figure out who’s going to have the song of the summer, but why bother. Josh Legg’s sun-drenched electronic music as Goldroom has just about won that title for 2015.

His new EP It’s Like You Never Went Away is a dreamy mix of ethereal vocals and escapist melodies. This isn’t your cookie-cutter type of tropic house, either. Legg’s rooted in songwriting and composition. He knows his craft and hones it well. “Embrace,” if you haven’t heard, is a summer anthem. It’s effortless dance music that goes down smooth and gets the juices flowing. Summer lovin’ has never felt so good.

How did you get your start in producing?

I’ve been writing songs on my own since I’ve started playing instruments. (I got a guitar when I was 10 years old, maybe?) A cousin of mine is a singer/songwriter and noticed that this was going on and gave me a Tascam 4-track recorder. They showed me how to use it so I could start recording songs that I had been writing. I got really enamored really early with the idea of making the songs that I was writing sound as good as possible. I just wanted to make recordings sound good—which I suppose is what producing is. Apple Logic eventually came into my life. It’s been a 15 year journey, really.

There was never really any magic moment where I started to make electronic music, either. I just started to incorporate keyboard sounds when I got Logic just cause they were there and I was interested in them and liked the way they sounded. Honestly, it made me more interested in seeking out that kind of music.

Cool! So there wasn’t a song or show that kind of sold you on this career?

The Daft Punk Pyramid show totally changed my views on what was possible within the world of electronic music. At the time, I was still writing all my songs on a guitar. That show made me believe that electronic sounds could be just as communicative.

That’s awesome. I feel like it’s cliché to say, but your stuff sounds like the beach. It’s an escape. Where does your music take you and where do you hope it takes listeners?

Growing up, I would spend summers on boats, so if music went away tomorrow I would probably be teaching kids how to sail. The ocean, and especially my connection with boats and sailing, has been something that has unconsciously influenced everything I’ve made. It’s not really surprising that you use those words, especially because music has been a big escape for me my whole life. Music tends to be an escape for me more so than something used to look inwards or enhance a moment. It’s always been an escapist art-form for me. It’s not surprising to me that people catch beach vibes or ocean vibes from my music because a lot of times I feel like I’m writing music for the kid that was thinking about that kind of stuff when I was young.

Is that what you sort of set out to do as Goldroom?

No, not at all, actually. When I sit down to write a song, the thing that I’m most concerned about is conveying something true and authentic. People often say it’s good to know as much about music theory, but then, as soon as you start to make music, you forget all of it. It just sort of absorbs itself naturally. In some ways, I feel the same way about influences. Like, I really don’t like actively referencing stuff. My goals with Goldroom were always to bring a sort of classic songwriting mentality to electronic music because there were certain things that I loved a lot about the genre. I believe the way electronic music is being made today puts the songwriting last. I don’t think there’s a lot of good songwriting. That’s been my goal from day one: to try to bring classic songwriting to electronic music, and secondarily, to bring as much live instrumentation into the fold as much as possible. I try to stay outside of the box as much as I can.

There was a shift where you stopped singing and a female vocalist started to appear more and more in your music. Can you speak to that?

Well, first of all, I didn’t have any opportunity to work with female singers at first. I didn’t even know how to go about doing that. I was singing out of necessity, but I also wanted to challenge myself. I started to do remixes for other people and a couple of remixes I did with female vocalists became the more well-known things that I had done. My manager at the time suggested that my songwriting aesthetic works really well with sort of ethereal, breathy female vocals. I love songwriting. Songwriting is what I’m most excited about when it comes to music. I think that part of the creative process is really exciting and getting the opportunity to write with other people and seeing how that process works is very exciting to me. It sort of just happens to be that most of the features that have come out are with female vocalists. It’s not by design at all. My full-length album will represent a little more variety.

Can we expect more stuff like the Snapchat mini movie to come out? It’s awesome.

Maybe! I started a relationship with Snapchat early on and there were a few fans of mine at the office. (It wasn’t what it is now by any means.) We made a short video that was used to sort of inform people about the story feature and so I’ve kept close with a lot of those people over the years. About four or five months ago, the idea came up to make a larger video and here we are!

Was the narrative a personal thing or was it something fictional you thought of?

Totally fictional. We wanted to make something very John Hughes-y. I’m just a sucker for films like that. So when we had the opportunity to do this, I think we all knew that was the sort of vibe to go for. Of course there are some pretty autobiographical moments in there. When I was a freshman in high school, I had a party at my house and it was broken up by the police, and, you know, the sailing angle in the “Fifteen” portion was straight out of my head because the song “Fifteen” itself is about my friends and I teaching sailing at 15 and talking about how liberating that summer of my life was.

If your music were an emoji, what would it be?

Such a good question. Maybe it’s like the raindrop emoji but I don’t know if that’s the right word for that one. The “wet” emoji. The music that I love the most is the kind where you can lie on your bed with headphones on and your eyes closed, and the music just kind of wraps you up. Some people like music because of the communal aspect that comes with seeing it live and some people like it because it can affect their emotional state—whether it makes them happy or sad. For me, music has always been this very escapist, full body experience. I like it the most when I’m alone in my car or alone in my bed. I feel very strongly that that is exactly what it should be, the “wet” emoji. It should be just like getting into a warm bath.

Aside from the album, what’s next?

I’ll be playing a lot live shows which I’m really excited about because over the past year I think 75% of the shows I play have been DJ sets. I just put a new live band together and we’ve played a couple festivals already. So just really getting on the road and getting to showcase the new material, but doing it in a setting where I get to sing the songs to people. To get to play guitar and play keys and see how people actually react to the music being played live; that’s the most exciting this for me. Finishing this album is really everything to me at this point. It’s music that I’ve been working on for the past four years. There’s so much I’ve held for the record and have been really excited to share. I can’t wait to do that.