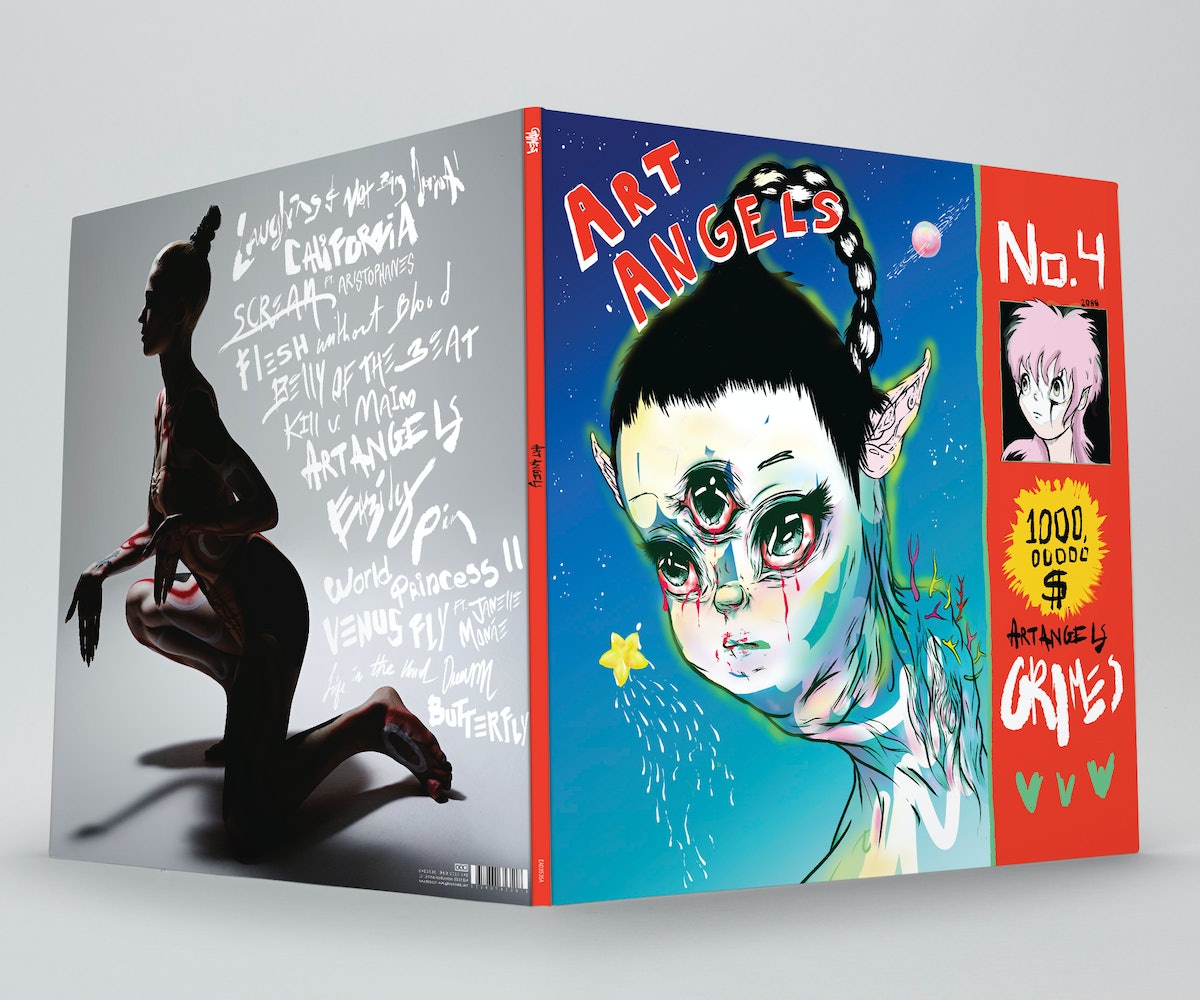 If you’re a big Grimes fan, you’ll discover a song in the middle of her new album, Art Angels, that you’ve known by heart since March, and it will either give you fits of delight or betrayal.

“Realiti” originally surfaced back in March as “REALiTi,” a stray survivor from a "lost album" that Grimes—whose real name is Claire Boucher—unexpectedly set free on YouTube. It broke the relative quiet that followed her 2012 breakthrough Visions, and further stoked a hunger among her fans that was only sort-of satisfied by the dubsteppy snack of 2014’s repurposed Rihanna reject, "Go."

"REALiTi" arrived like a little revelation. It didn’t come off like a reject or refugee. It felt free and unfussy, an unfinished masterpiece of soft-focus melancholy. A little rough around the edges and blurry in the corners, like most of what we’d already enjoyed from her. “[I]t was poorly recorded in the first place and never meant to be heard by anyone,” Boucher apologized in the info on YouTube, “so its a bit of a mess haha.” Perfect.

On Grimes’s fourth album, “Realiti” is decisively less of a mess. Those swirling, searching melodies are now fixed to a sturdy frame of thumping bass. The sound has been thoroughly boosted and buffed; her vocals are clearer and more confident. It sports fake strings and high gloss. For some, this is going to be a problem. (In a Reddit forum on the album, one Grimes fan griped, “The studio version strips out everything I enjoyed about the song.”)

Grimes’ firmly maintained DIY ethos (she writes, performs, and produces all of her music) has given rise to a patronizing tendency among her critics: It’s all too tempting to agree with the Reddit griper, to indict these shiny new signs of sophistication as evidence of a greater, more sinister change of plans—selling out, we used to call it, back when that was possible.

Crusty old hangups like these aren’t very helpful, especially when talking about Grimes. For one thing, advances in the realm of home recording have put so many possibilities within easy reach that staying lo-fi now comes off less like piety and more like a put-on. For another, it’s just a reductive way to approach Grimes, who gets reduced enough through the Newsom Effect—her high risks gets less focus than her high register, and descriptors like "elf", "pixie", and "sprite" implicitly shrink her sizeable talent.

To fault Grimes for the fearless steps she takes on every track of Art Angels—and yes, many of them are doozies—is to miss its enchanted forest for its sometimes gnarly trees. Her imagination is set loose here, and if you can’t follow every turn it takes (the clawing “Kill V. Maim,” for instance, is sung from the perspective of Al Pacino in The Godfather Part II—“except he’s a vampire who can switch gender and travel through space”), Art Angels at the very least tells the story of Grimes getting better and better at just about everything she does.

Those fans still desperately clinging to “REALiTi” will find plenty of comfort in the album’s handful of tracks that continue the Grimes tradition of effusive, swoonworthy pop destined for the dancefloor. Where were you this summer, “Butterfly”?

And she maintains her unique skill with a mixed message—pop structures have long served as Trojan unicorns for Grimes. In “Flesh Without Blood” (an essential for anyone who keeps a Saturdays = Youth playlist running), she sings lines like “I just don’t like you” and “I don’t see the light I saw in you before,” with notes of triumph. In “Venus Fly,” her collaboration with Janelle Monáe, the repetition of “Why you lookin at me?” is grafted onto a death-drop-ready ballroom stomp—a beat that usually asks “Why aren’t you lookin’ at me?” And both “Artangels” and “World Princess part II” give her voice an even more impossibly gleaming plasticine sheen—and somehow it makes her more human.

But the parts of Art Angels that point furthest forward are also the ones that push hardest back. The first three songs, for instance, could function as a hater filter, testing the faithful with a steep climb before allowing them into the lush valley of the rest of the album.

The lithe, wandering intro/invocation of “laughing and not being normal” is followed by the intense neon blast  of “California,” through which you have to squint pretty hard to make out its hypersaccharine sendup of mainstream pop tropes. And “Scream,” a collaboration with Taiwanese rapper Aristophanes, offers an intriguing idea of what Grimes might sound like when she hands off the mic (or burns her hand on the stove), but it feels like a test—one that the rest of Art Angels ensures is worth taking.

There’s an extraordinary range to the 14 songs on Art Angels (and she apparently has hundreds to choose from), but from the easy mid-tempo jam of “Easily” to the the beautifully frail “Life in the Vivid Dream” to the abrasive/addictive “Kill V. Main” (in which she growls “THEY DON'T! KNOW! ME!"), they all feel like views from the same vision—but it may be up to you to properly adjust your perspective.

If there’s any challenge to listening to Grimes as she grows, it’s only the daunting prospect of keeping up with her imagination. As she sings with wry joy in her parting words on “Butterfly”: “If you’re looking for a dream girl, I’ll never be your dream girl.”